Years ago, I read a trip report from a then stranger, now friend, about a long trek from Timberline Lodge on Mt. Hood to Eagle Creek in the Gorge—50 miles in a day. I don’t want to say it was an inspiration, because that’s not exactly right. It didn’t immediately become my ambition to walk a similarly ridiculous distance. But knowing that it was possible—that a human could walk 50 miles or more in a single day—changed the way I thought about walking.

There’d been an upper cap: 30 miles maybe, or 35. A number beyond which it was impossible to go. But seeing this didn’t so much move the boundary as undo the possibility of a boundary. What’s possible is what’s possible, and the only way to know is to try.

So I’ve spent the intervening years hiking the longer and longer days with no real end in mind. But hitting 50 miles feels like a milestone, like returning to the thing that started all of this.

The basic idea was to do a long yo-yo on the Deschutes River: from the State Park where it flows into the Columbia 25 or 26 miles upstream to Mack’s Canyon and back. Not a lot of turns and no route finding. Just a long day following the river, almost hypnotized.

It’s a little after four in the morning and I’m sitting in my empty car in an empty unlit parking lot in The Dalles, eating breakfast—a bagel and an ocean of coffee. It’s still full dark, slick black pavement and glowing white lines. But slowly cars trickle in. Two women already in uniform pull up the Starbucks. A young kid in uniform gets dropped off in front of the burger place. I finish quickly and drive off, eager to beat the day to the Deschutes.

When I get there, the trailhead’s still sleeping. Two high school kids wander from their camp to the bathroom wearing pajama pants and winter coats.

I start to run and the sun starts to rise. It goes on like that for hours: the sky shifting from black to red to purple to blue, and me, alone, surrounded by this colossal place. 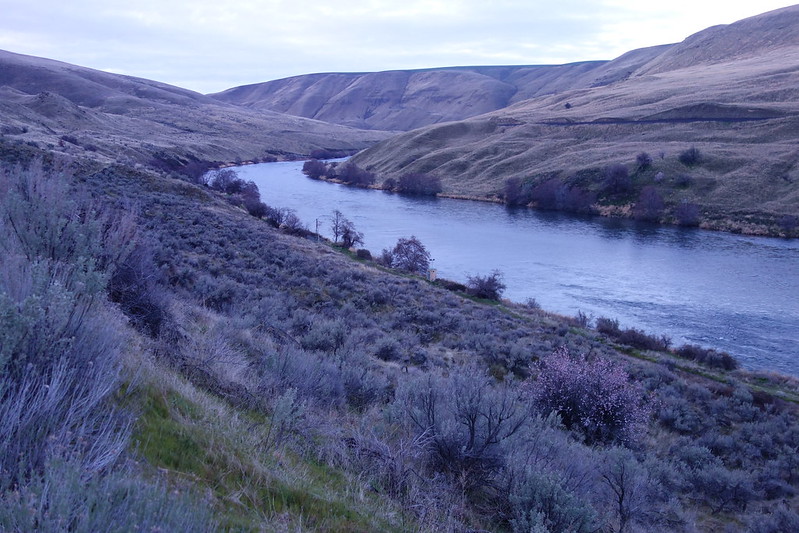 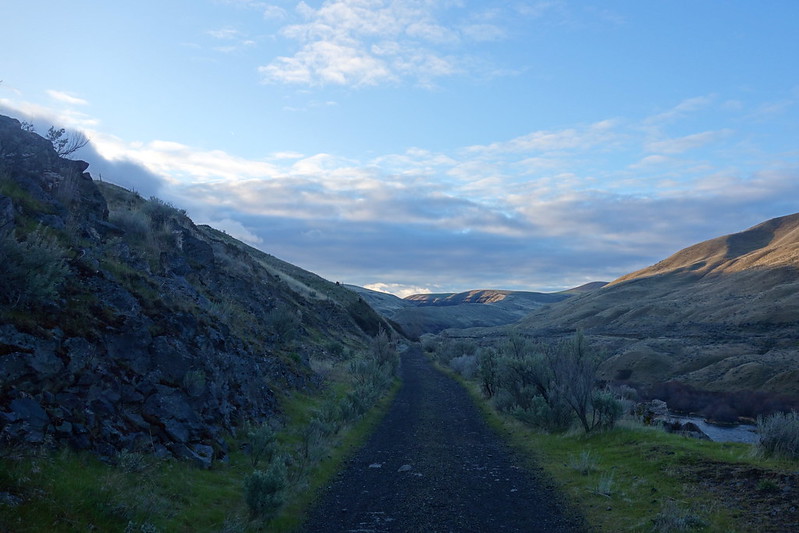 Moving feels easy today, like gliding on a frictionless surface. I look down at my legs and they seem to be moving independently of me. The entire scene—sky, river, road, everything—feels independent of me, like I’m somehow outside of it, watching it from everywhere at once. 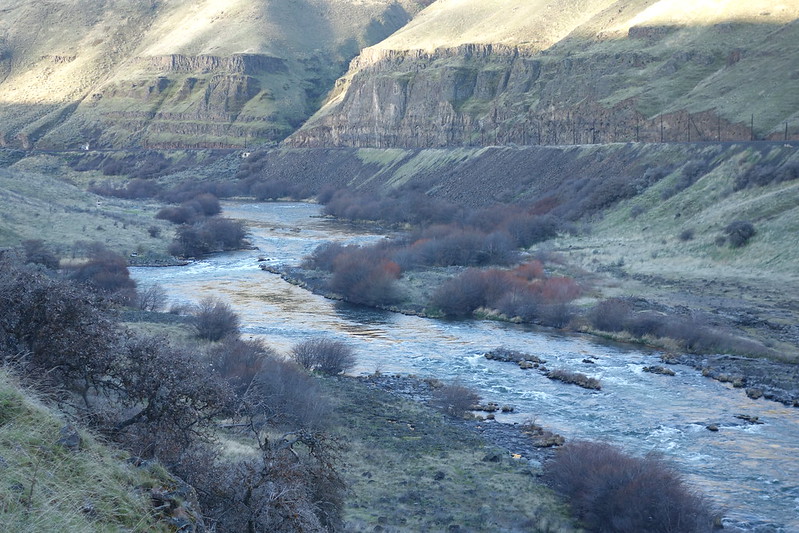 Eleven or twelve miles in, I reach the old Harris Homestead: and overgrown alfalfa field, then the moldering remains of an old 19th century farming operation: a house that’s fallen in on itself, wooden corrals and cattle chutes, stalls for sheering sheep, a bunkhouse for workers. 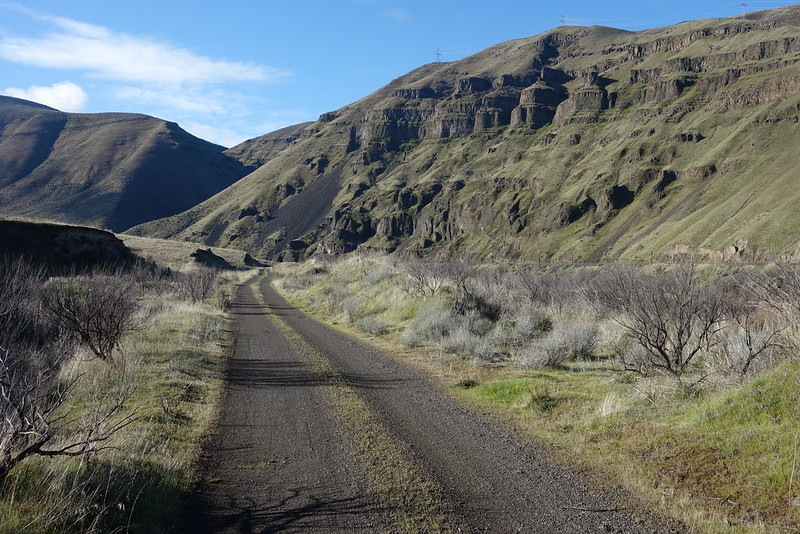 A couple decades after the Homestead was built, two competing rail lines began to race up the canyon. First, Edward Harriman, working for Deschutes Railroad, then a division of Union Pacific, built on the east side, constructing the tread I’m walking on now. But then James Hill, working for Oregon Trunk, a division of the Spokane, Portland & Seattle Railway, which, through several mergers, eventually became BNSF, began building on the west.

For a time, the two lines built and ran parallel. But eventually it was decided that the canyon could only accommodate one, and the two were consolidated—mostly on the west, Oregon Trunk side. The Deschutes Railroad line ceased operation in the mid-1930s, after an agreement to allow Deschutes trains to run on Oregon Trunk line. That arrangement still stands today, as Union Pacific and BNSF jointly operate and maintain the western track.

The old eastside Deschutes Railroad grade is now a trail, and an Oregon Department of Fish and Wildlife access road for the Lower Deschutes Wildlife Area. Most of the track is now invisible: torn out for scrap or buried under slides. But just past the old Homestead, they’ve refurbished a water tower that used to service the line, the only one left of the eight that once stood. 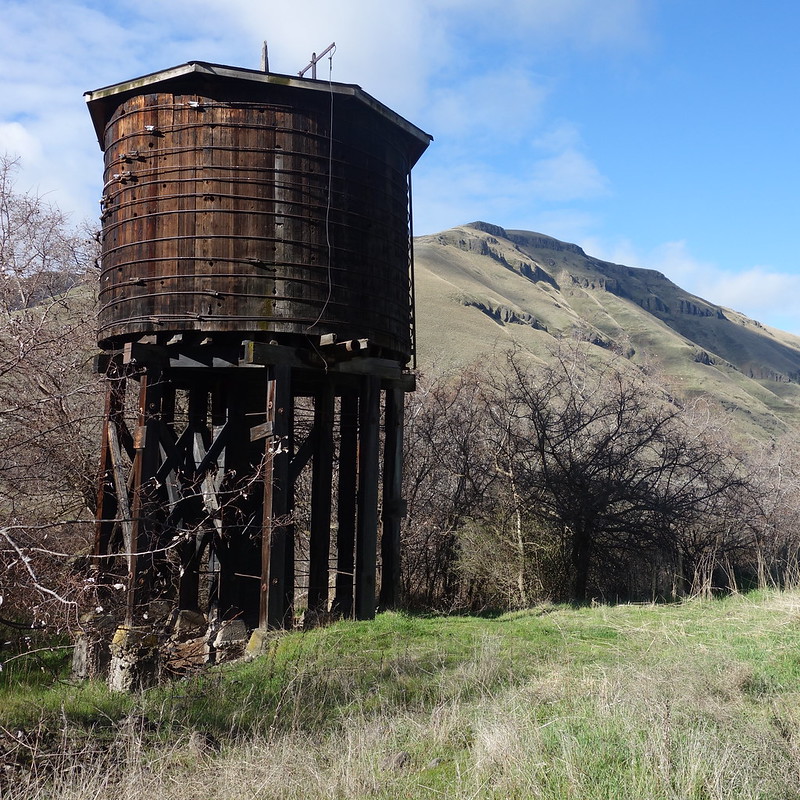 The tower and collapsed old buildings feel like monuments, or, if not exactly monuments, then at least things to be preserved. But what makes them special?

They are not, on the face of it, exactly notable. The west is littered with abandoned homesteads and buried rail remains. If we preserved all of them, there would never be room for anything new.

But I still want to say that these things are important. Why? I think the answer has something to do with time. They’ve lasted, when so much else from their time is gone. They’re dear because they’re rare relics of a past that’s past. 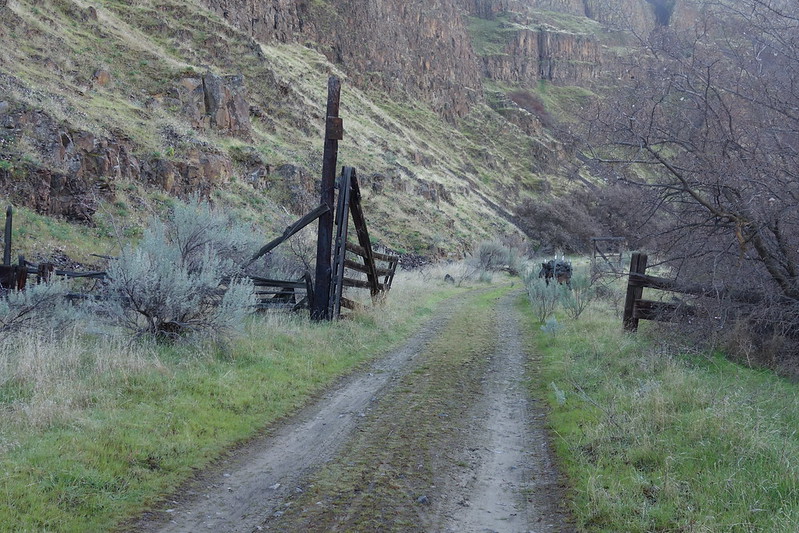 I think of this old letter I have from a girl I “dated” for, like, a week in junior high. It doesn’t say anything exceptional—it’s just an account of a day: mumbling through school, listening to Depeche Mode, fighting with her parents at dinner—but it’s precisely that ordinariness that now makes it dear. I read hundreds of letters like that growing up, but that’s the only one I still have. And it’s now in the same envelope as my diplomas and birth certificate.

Past the tower, the road narrows and runs rougher. A storm starts a few miles south with distant flashes of thunder. Two hawks circle. 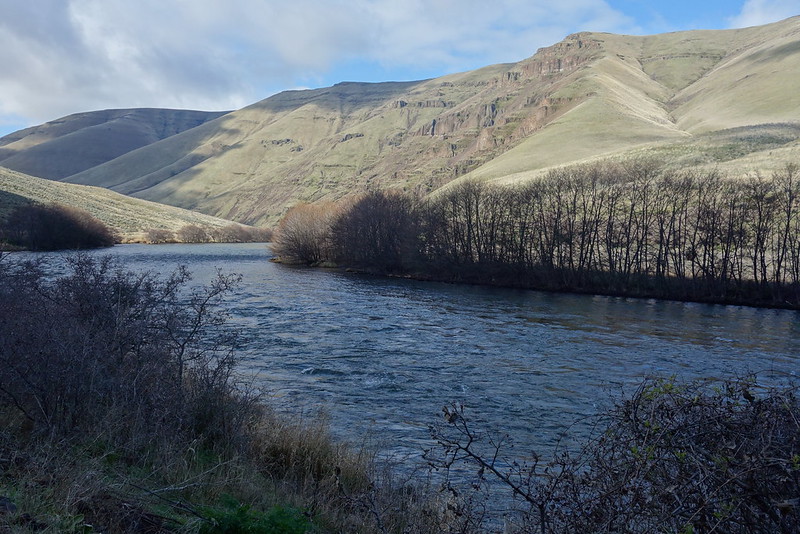 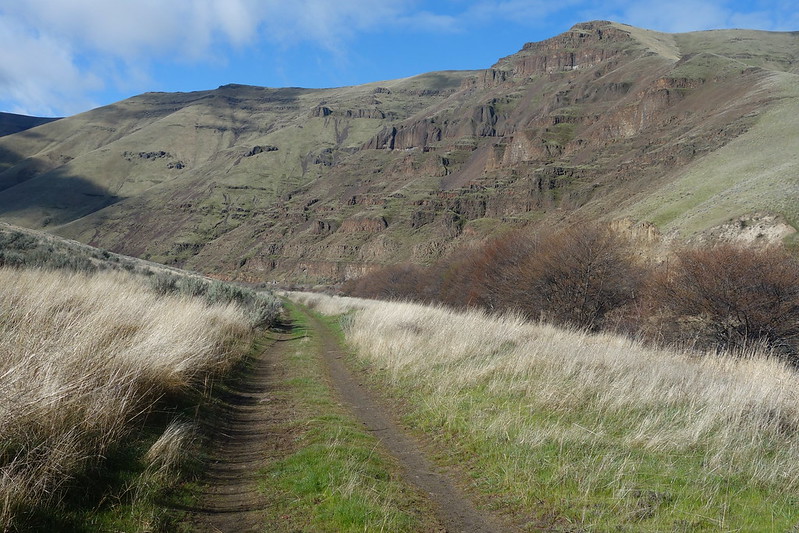 Space spreads out, and time too. The scales get weird. The trail enters a system of cliffs and canyons and I feel like I’m floating through a maze, a balloon rising into a clear, complicated sky. 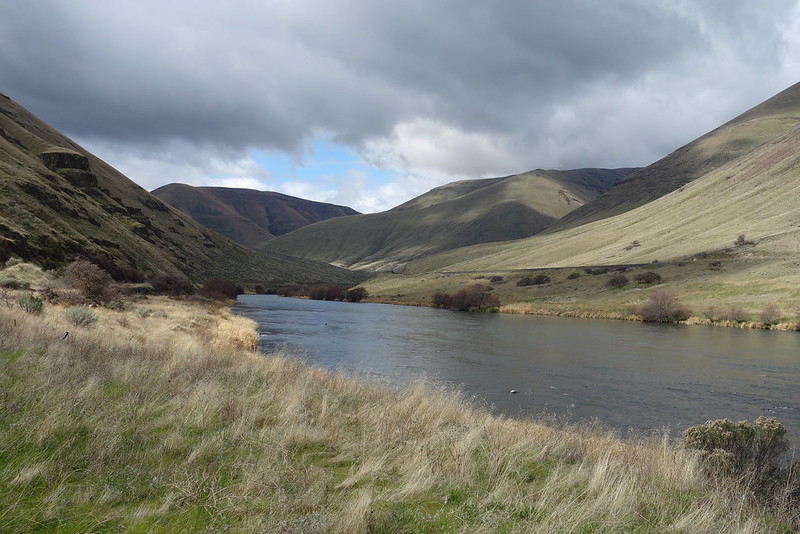 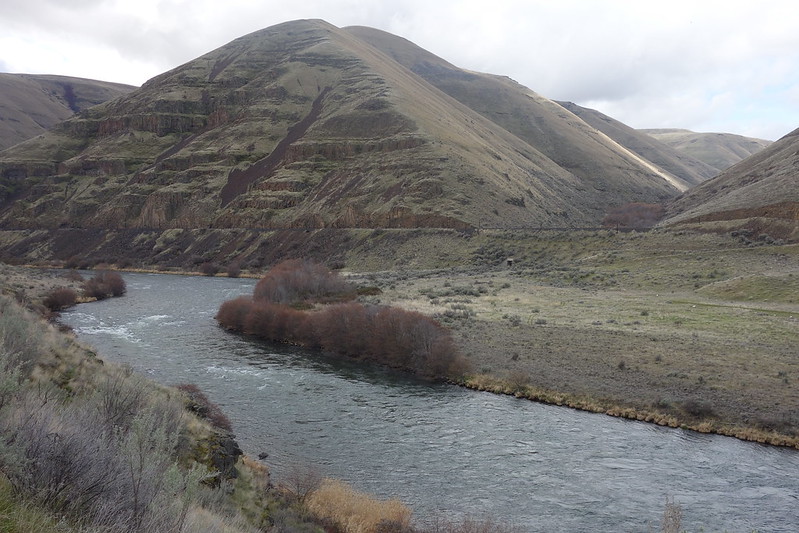 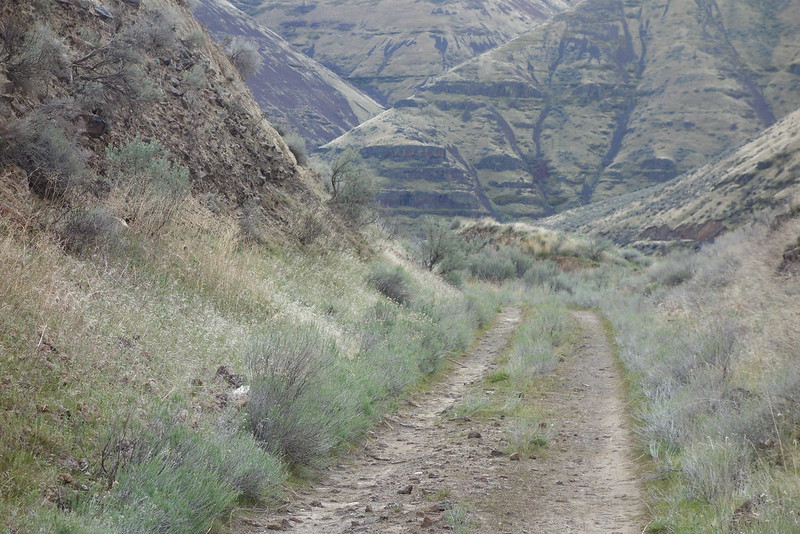 Soon the old line seemingly ends at the cusp of the first of several canyons. There used to be trestle bridges here, but they’ve all collapsed, and now all that’s left are piles of old wood and twisted metal. Faint paths fall steeply in and out of the canyons—more like animal tracks than human. It’s beautiful. 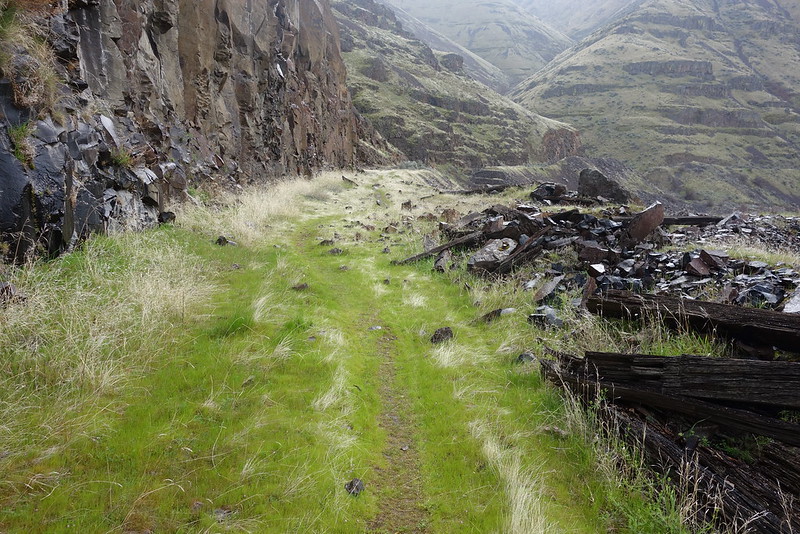 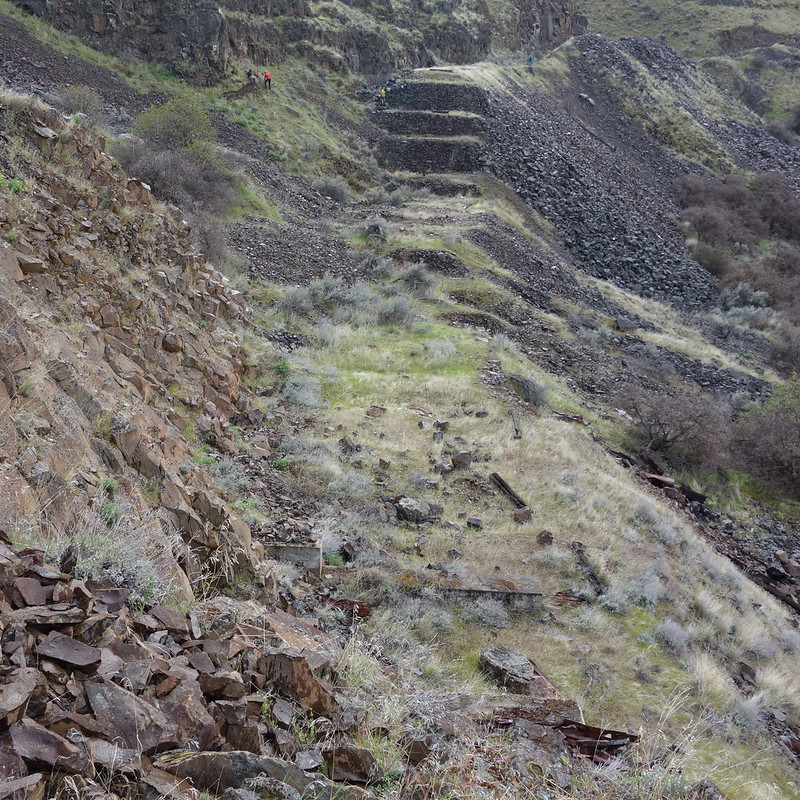 I shamble in and out of the canyons as the rain picks up. It’s the sort of scrambling that’s so much fun you don’t notice how tired you’re getting, and soon the tread’s back again, on its way to Mack’s Canyon. 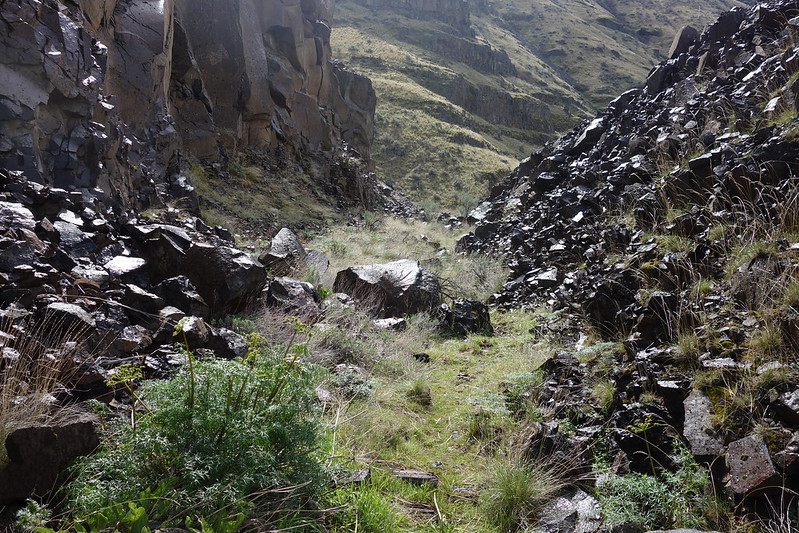 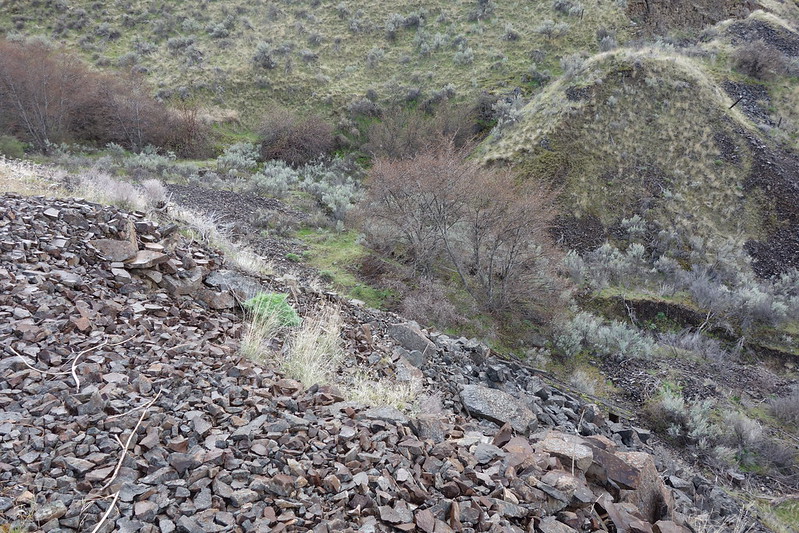 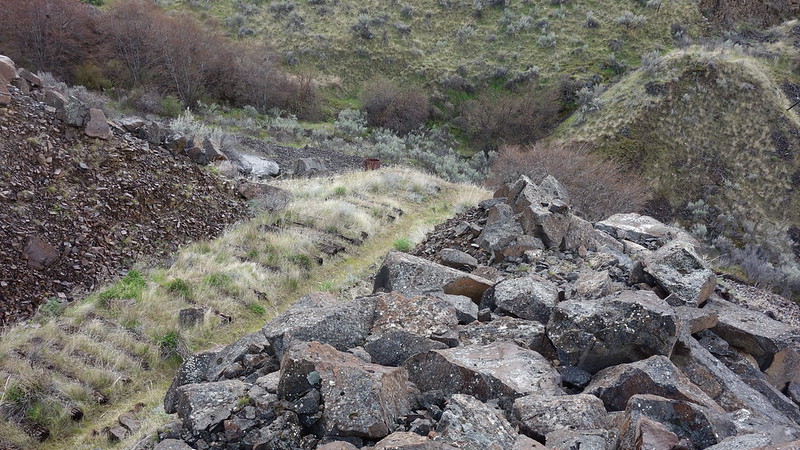 I tumble out into the trailhead, feeling uncertain how I’ve made it this far. If my GPS is right, I’ve gone around 26 miles today—my turnaround point—and it’s barely after noon.

I sit in the road for second, drinking Coca-Cola and eating a tortilla with peperoni and suddenly feeling very tired.

The way back is blurry—rain on my glasses, landscapes smearing together. This morning feels weeks away. I feel like I’ve been walking on these old rails forever. 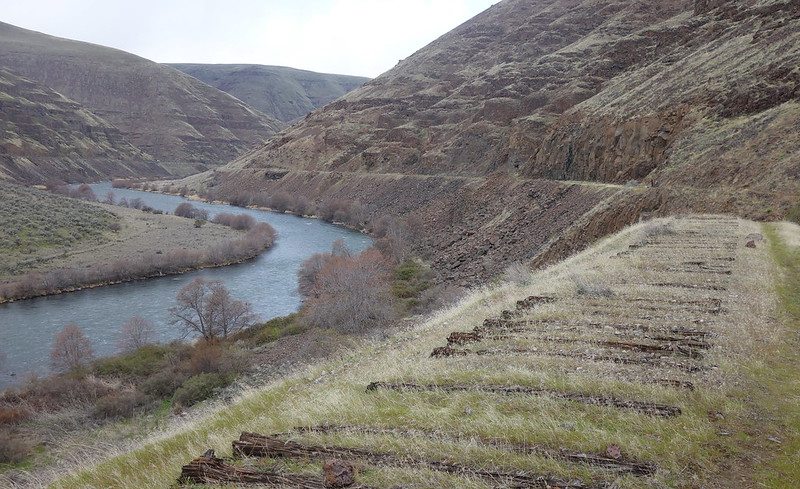 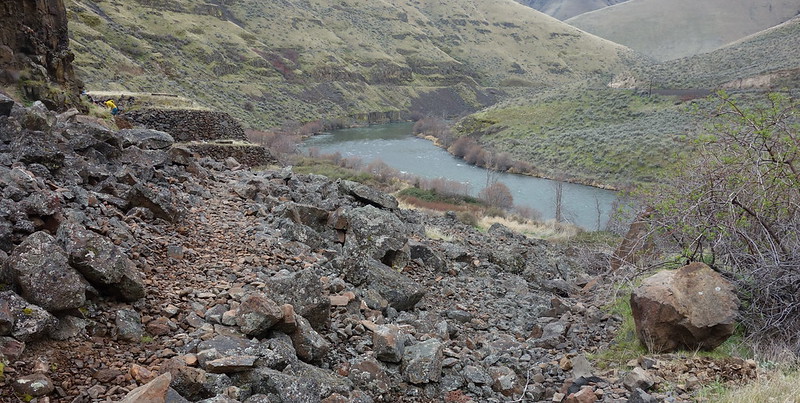 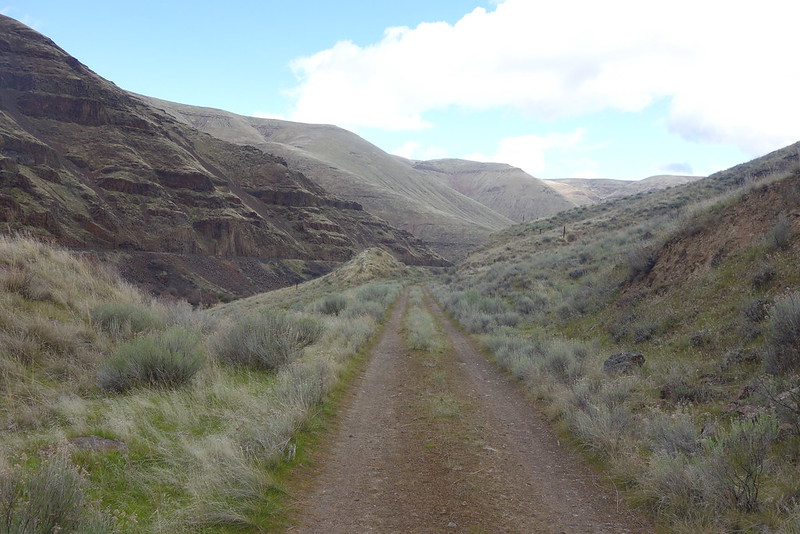 Years ago, I read about some guy who had been sick, and worried about how much time he had left. He’d read that we experience time differently—more slowly—when we’re doing something new or hard, and so decided to do something new or difficult every day, to make the time he had left as long as possible. He spent a year that way. They interviewed him halfway in, and he said it felt like he’d been doing it for a decade.

That’s one of the things—maybe the primary thing—I love about these long days. It feels like I’m somehow cheating time, like I’ve worked out a way to fit more hours into the hours I have.

It’s late afternoon by the time I’m back at the old Homestead. I sit in the trail for a while, stretching my legs and watching a family of Bighorn Sheep ramble around on a steep rockface a thousand fee up. 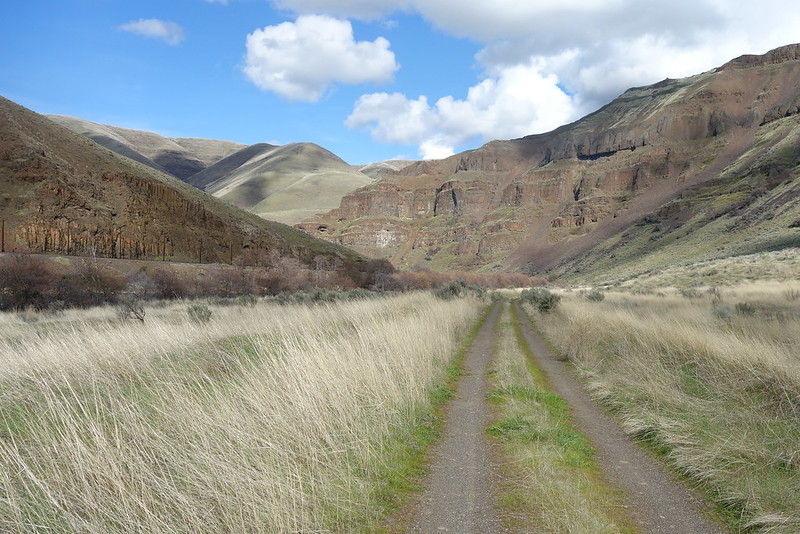 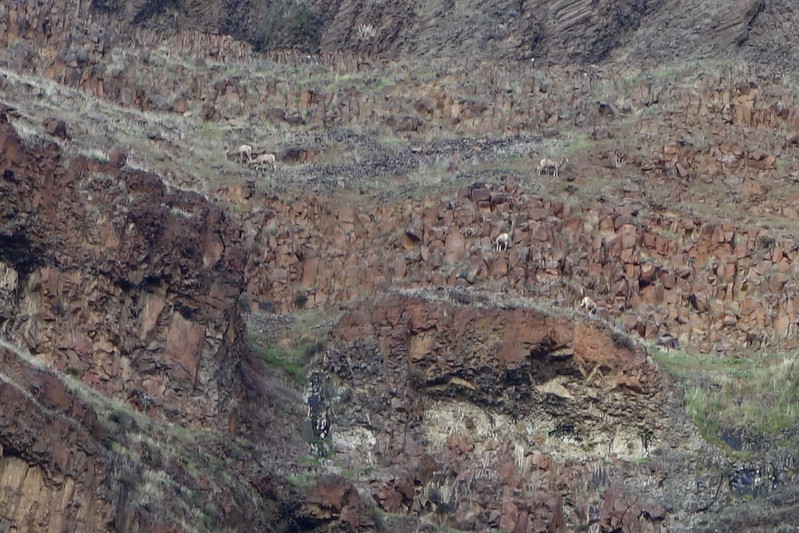 The first people I’ve seen in a long time pass, a couple on bicycles. They ask how many days I’ve been out here.

Walking away from the Homestead, I get slower and slower, until, eight miles from the car, I just hit a wall. The connection between my brain and legs feels broken. Every time I try to lift my left leg, it just… doesn’t lift. 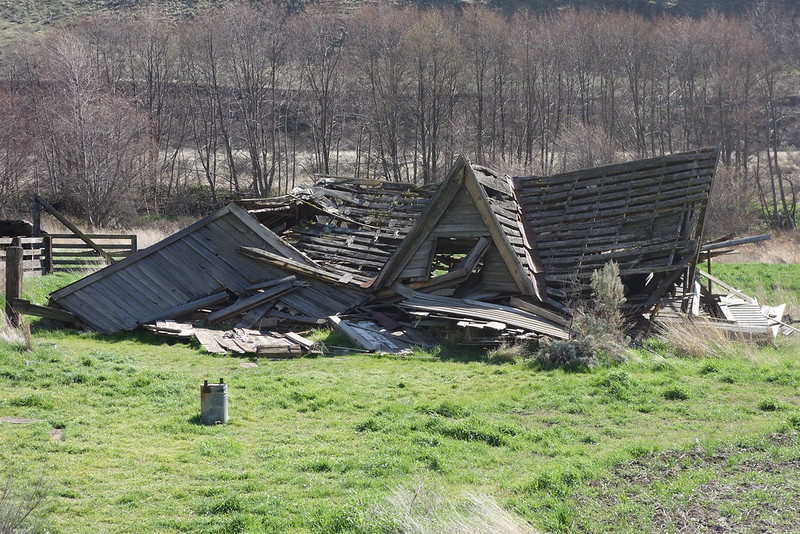 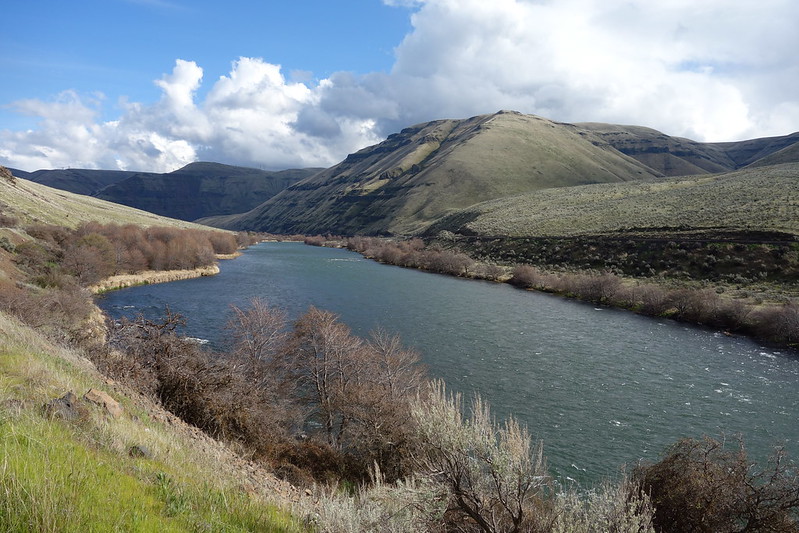 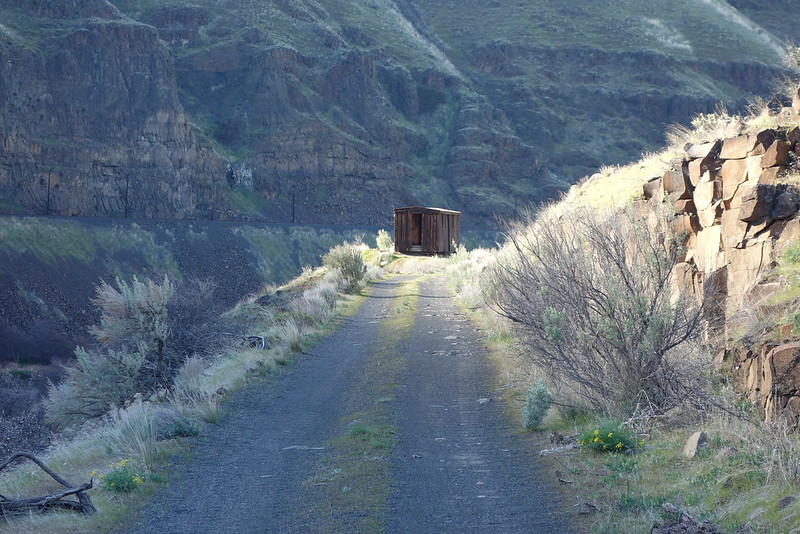 I sit in the trail for half an hour, eat some food and drink the last of my Coke and watch the sunset start. A thousand birds appear out of nowhere and glide down to the river, fishing. They sit on rocks, watching the rapids, dipping in every few minutes.

I guess I’ve got to get out one way or another, so I stand up, and limp on down the road, using my trekking poles like crutches.

The miles go slowly, but they go all the same, and soon I can see the Columbia, rushing under the day’s last light. All the campers have gone, and my car’s nearly the last in the lot. I open the driver-side door and just sit for a long time, looking at nothing. The 52-mile stare. 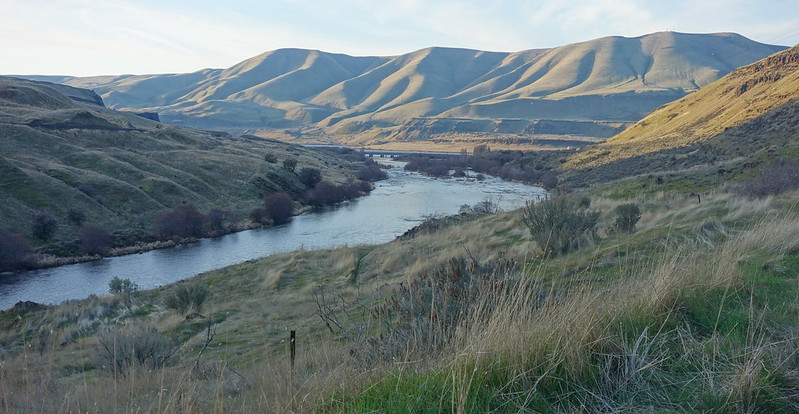 It feels like months since I was here this morning, since those kids in pajamas and winter coats, the black dark breakfast in The Dalles.

The bag from my breakfast bagel’s still sitting on the passenger seat, but I feel weirdly conflicted about throwing it out. Maybe I’ll bring it home, put it in that envelope with my old letters and birth certificate.

There’s this essay from Brian Eno that I really love, The Big Here and Long Now. His idea is that, if we’re going to live in the here and now, we need to understand “here” and “now” in wider ways than they are usually understood. Our places in the world—the places that concern us—need to be bigger than the small areas that directly surround us. And the times we touch need to be longer than the tiny times of our lives.

Eno’s concerned with instilling a sort of global, intergenerational awareness. He helped to build an enormous clock in the desert, meant to run for at least ten-thousand years, and to remind us of our place in the longer order of things.

It feels almost paradoxical, but days like today—where it feels as though one’s entire life has been lived in sixteen hours—seem to expand the present, to allow us to participate, for a few hours, in something more permanent than the passing time of our lives, to live for a day as though it is at once an instant and eternity, to feel, for a while, if not the standing now, then at least a now that extends toward the horizon, beyond what one can see.