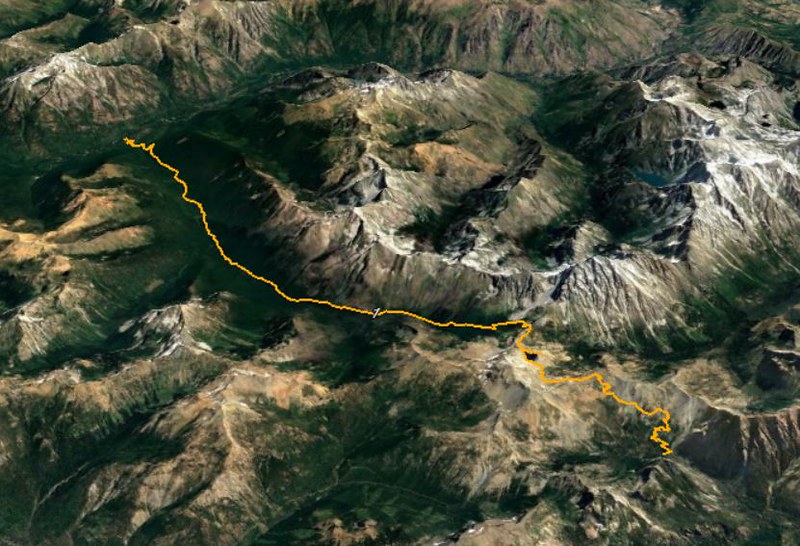 We leave Portland in the late morning, stop for sandwiches, then speed north into the great big nothing between the Columbia River and the Yakima Valley. Then a set of familiars hills and valleys, smoke and blue sky.

Then the Alpine Lakes, rising like The Alps as we drop to Ellensburg. “That” I point to the pointy peak on the right—Mt. Stuart—“is what I’ll be circle around tomorrow.” Krista smiles like she’s halfway between humoring me and being genuinely interested.

Then to Wenatchee, a parched mirage against the still blue Columbia. We eat at a barbeque restaurant that’s much better than it needs to be, then spend a nervous night in the hotel, watching Guy Fieri eat several sorts of hamburgers simultaneously.

We sleep late, and I doddle more. “We could stop for a…”

But I can’t stall forever, and soon we’re speeding up to Leavenworth, then bumping up Icicle Creek. Soon—too soon—we’re at my trailhead, saying goodbye.

“Or…” I tell a Krista who’s been expecting this. “Or I could just go back with you, and we can call this a lovely weekend getaway.”

“Sweetheart,” she’s more patient than I deserve. “I’ll see you in two weeks. I love you. Now kiss me goodbye.”

The Jack Creek trail climbs briefly as it leaves the Icicle Road, then settles into a steady soft up-and-down.

I look back where the trail crosses the Creek, up at Icicle Ridge. If I’m able to do the thing I’ve intended, the Ridge will be the end of my route, two weeks from now. I say hello to my future self. 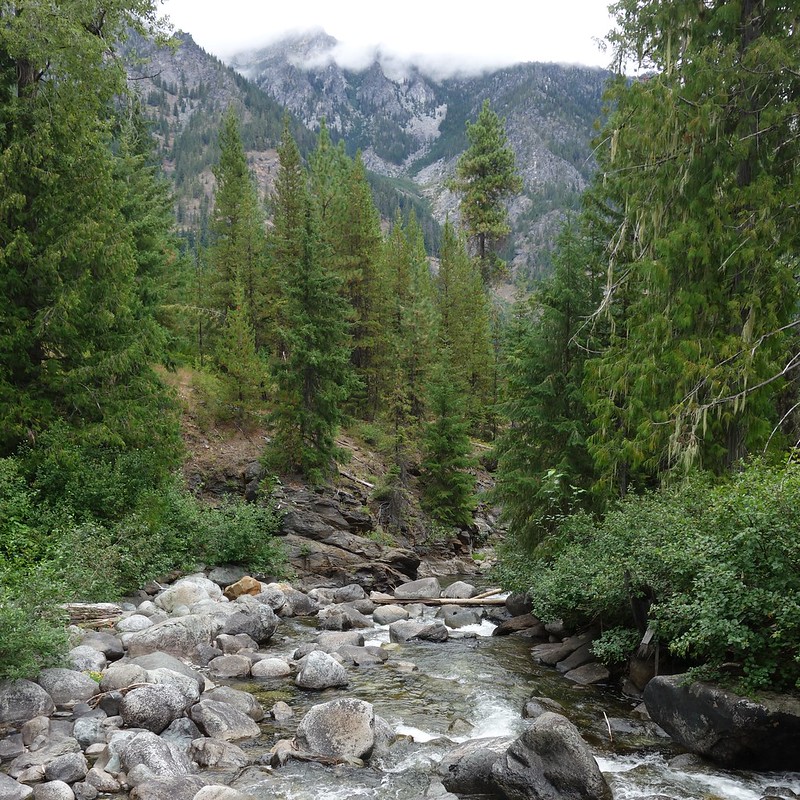 The forest is gorgeous here: thin eastern fir with an understory of huckleberry and fern. I spend several happy miles moving fast through the light warm rain, eating berries as I go. 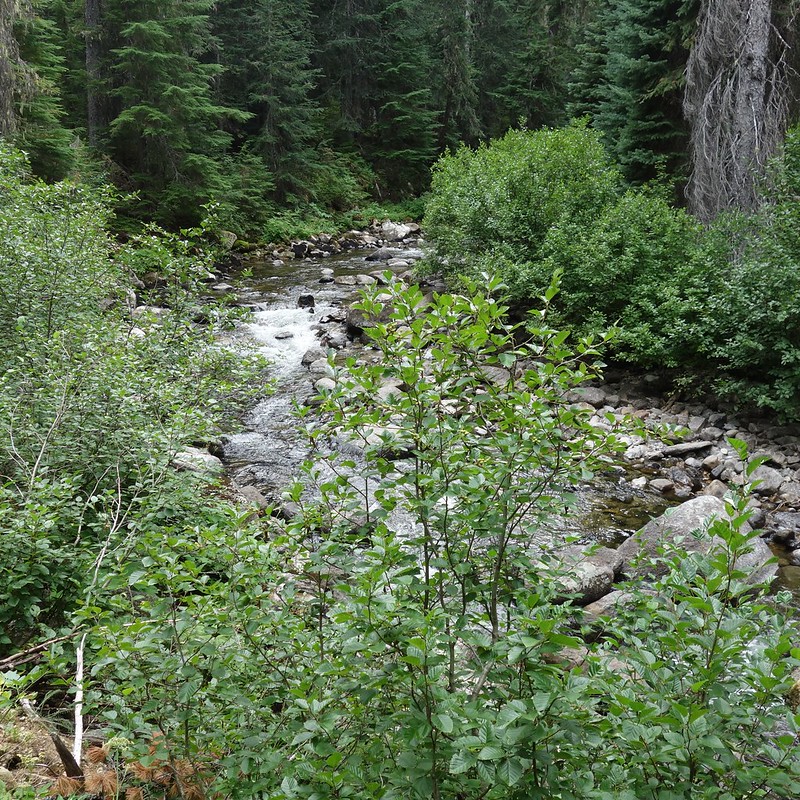 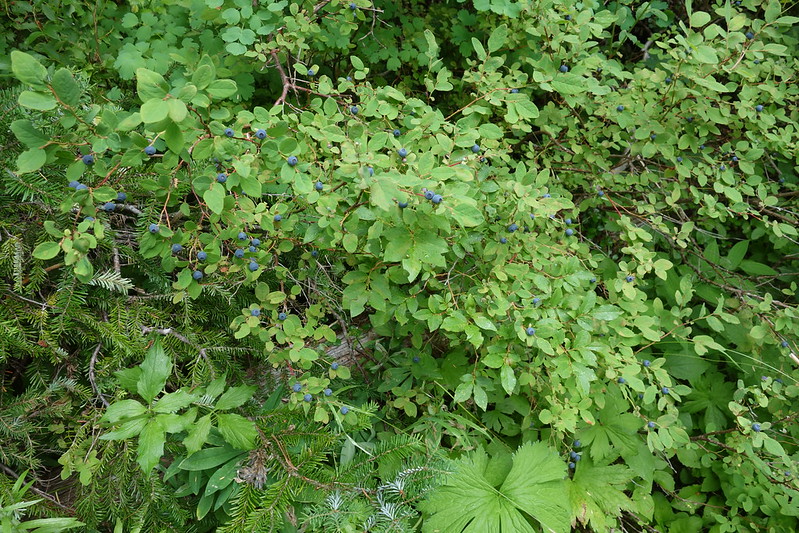 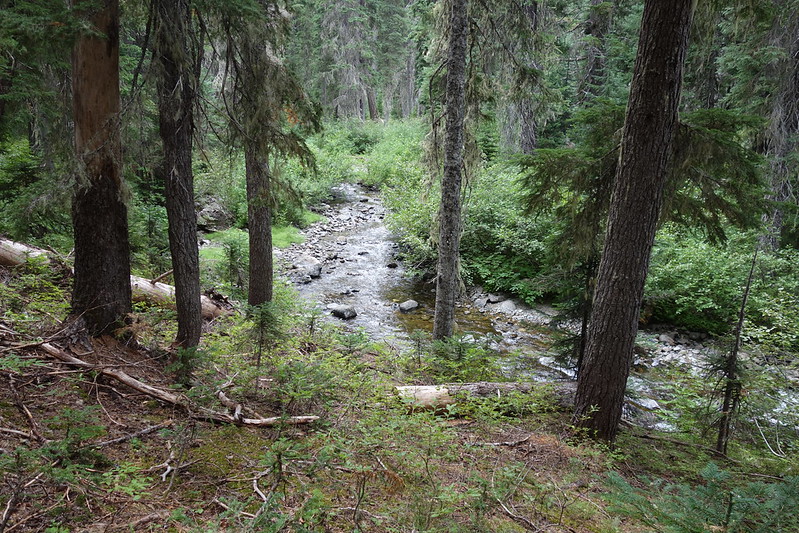 I meet the last folks I’ll see til Headlight Basin maybe five miles up the trail: a couple of women on horses, each with a Jack Russell Terrier and an old-fashioned canteen.

“Meadow creek?” the front one asks with an antique accent.

“Jack up to Stuart.”

“Oh!” She looks preemptively impressed. “You know the trail’s gone?”

The trail does exist… for a while. From the Meadow Creek junction, it passes through the scars of two titular fires—Jack Creek 2008 and 2017. The tread fades but persists to the outer edge of the burn, where an avalanche down from Van Epps Peak has destroyed the tread. 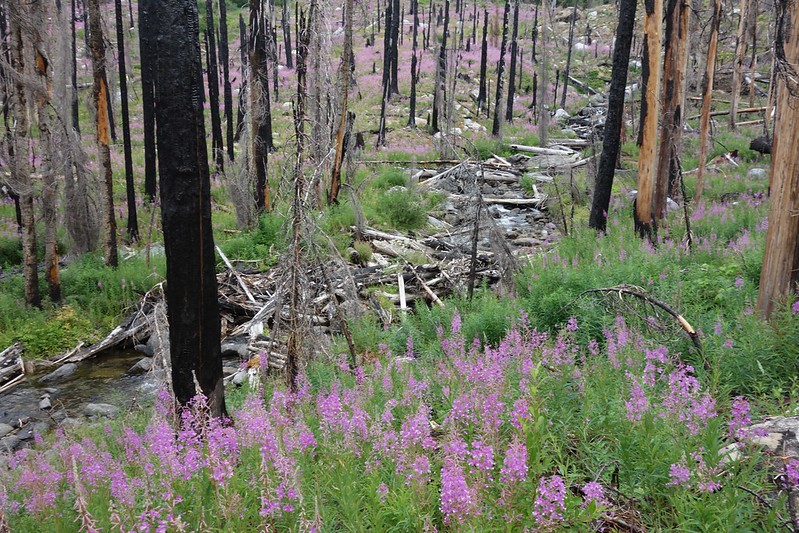 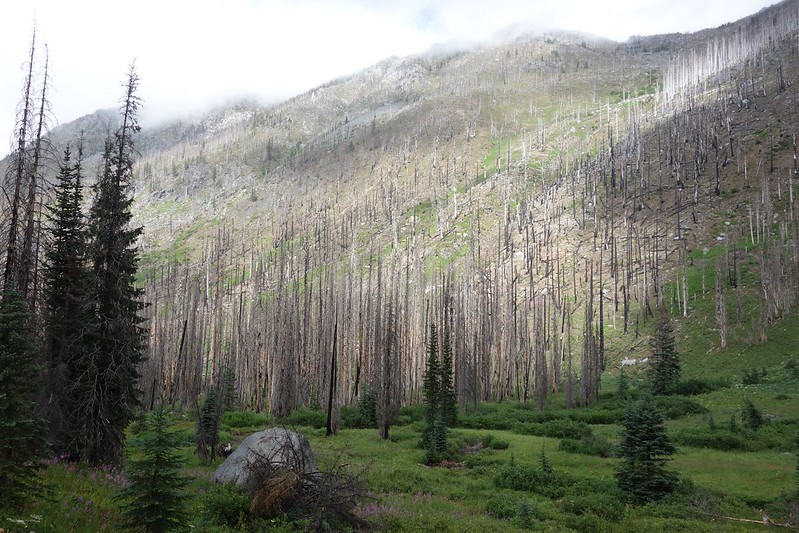 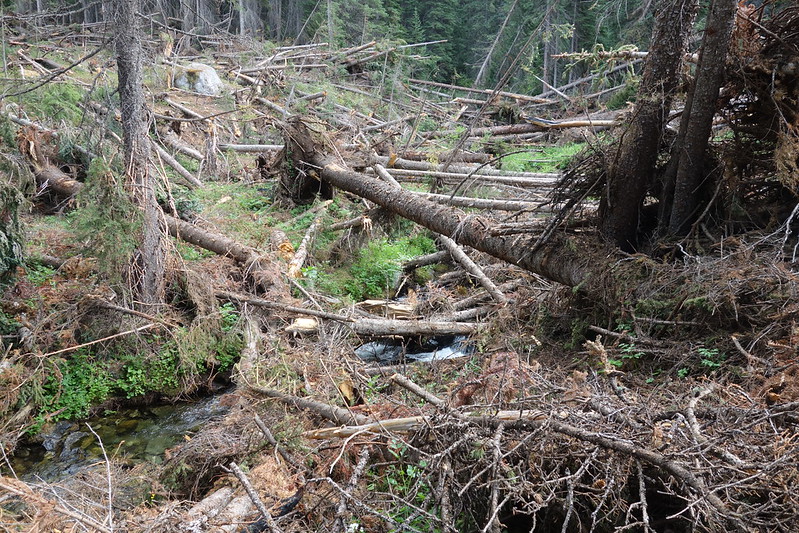 I piece through the deadfall to the creek, then cross on easy rocks and follow toilet paper flagging up the opposite bank.

Halfway up, I run into a wall of trees, perpendicular to the “trail.”

I climb over and under and to the side. I remember something I learned last year, bushwhacking through the Muddy Fork on Mt. Hood: it’s fine so long as you go slow. So I go slow.

The only problem is that some of the deadfall is burned.

I’m standing on a log trying to shimmy onto another when suddenly both break. A moment of black, then I’m waist-deep in a tree-well I didn’t know I was on top of.

My leg hurts as badly as I can remember anything ever hurting, and my lower back feels almost like it’s been burned. I give myself a moment to think it through. Worst case scenario: I’ve broken my leg, maybe badly sprained my glute. I probably can’t walk out on a broken leg—I laugh at myself, at that “probably”—but I have the emergency beacon Krista made me take. I thank her silently. So worst case scenario: I have a broken leg and I’ll be sitting here for a while waiting for Search and Rescue, but I have food and warm clothes. This isn’t the kind of thing that’ll kill me.

If the leg is broken, it’ll probably be pretty shocking to see, and I think it’ll be best if I have my next steps laid out, so as to minimize the panic. So I get the emergency beacon ready, mentally go through where I’ve put all the warm clothes in my bag if it turns out I need to lay here for a while. I’ll press the emergency button, put on some warm clothes, then… maybe have some dinner?

With a bit of difficulty, I pull my leg from the ashy well. There’s a lot of blood—my leg is wet with it, my sock a little stained—but the leg seems to be working normally. I run my hands up and down, feeling for anything out of place. It’s punctured in several places and hurts like hell, but the bones and ligaments and muscles all seem fine—or, at least, they seem intact, and they’re where they should be.

I guess dinner will have to wait.

The end of the avalanche track is a blur, and soon I’m back in intact forest. There’s a stream a short ways later, where I stop to clean and bandage my leg. The cuts are deep, but don’t feel threatening to anything but morale. The bleeding stops as soon as I apply a bandage and a little pressure. 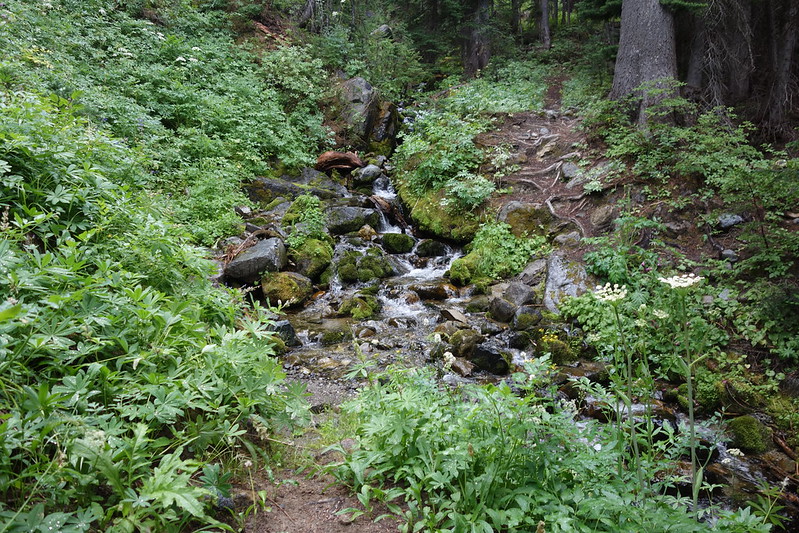 That taken care of, I turn to the less pressing issue of whatever’s going on with my lower back. I can’t really see it, so I take a picture with my phone. The skin’s not broken, but there’s already a bright blue and purple bruise, blood pooling under the skin. The bruise is precisely where the bottom of my pack hits my butt, and it hurts horribly, but it doesn’t seem particularly dangerous either. “Well,” I say to myself. “Well you got fucking lucky.”

I put my pack back on, eat a couple gummy bears, and ease on up the way.

Jack Creek’s upper basin is a wonderful confusion of cracked white granite and thin fingers of forest stretched up from the creek. 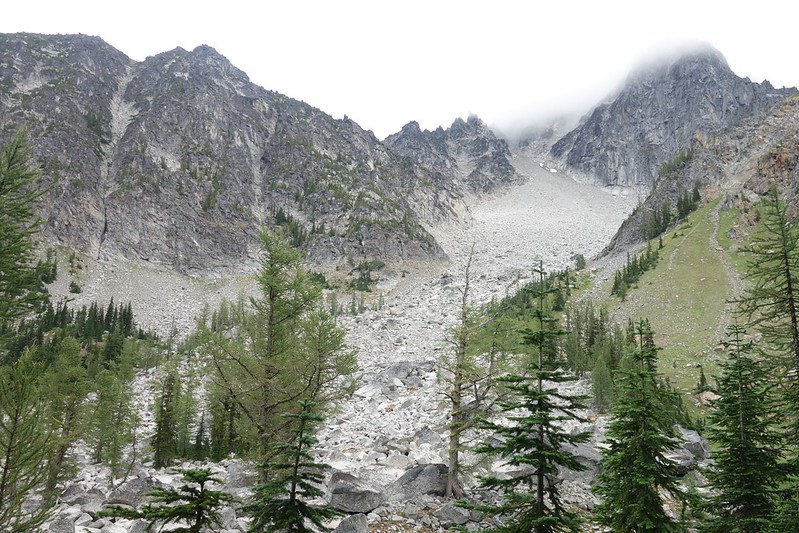 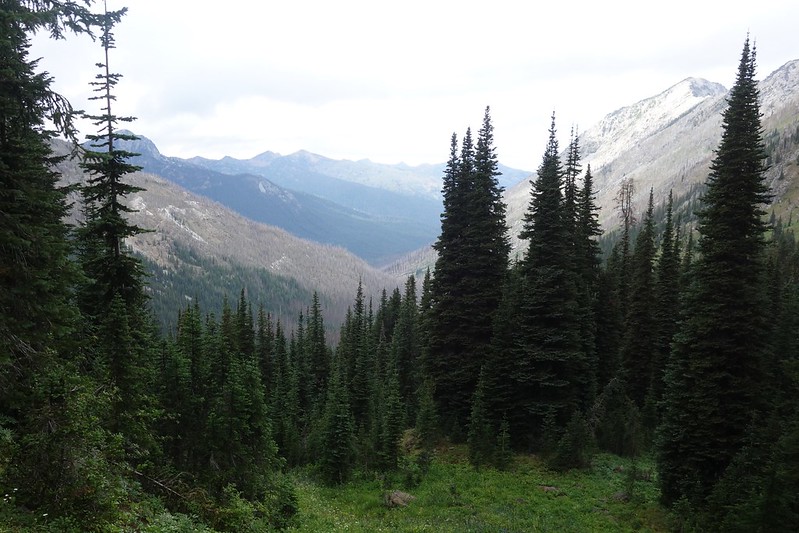 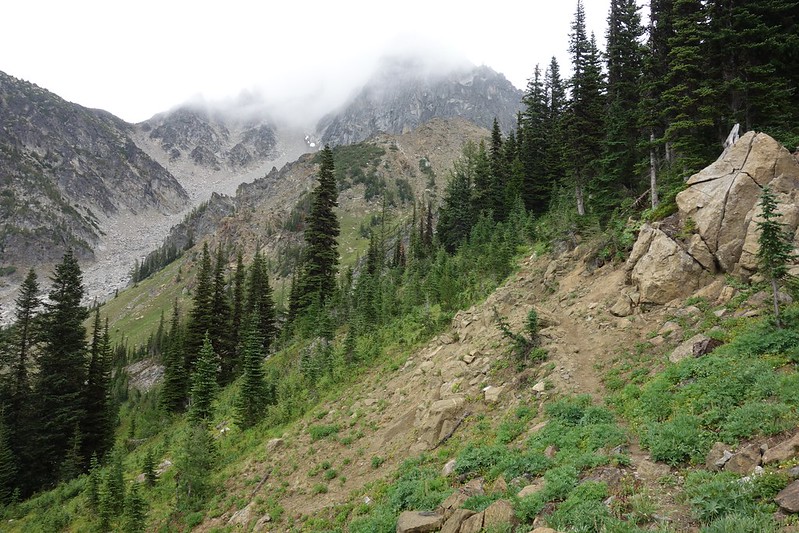 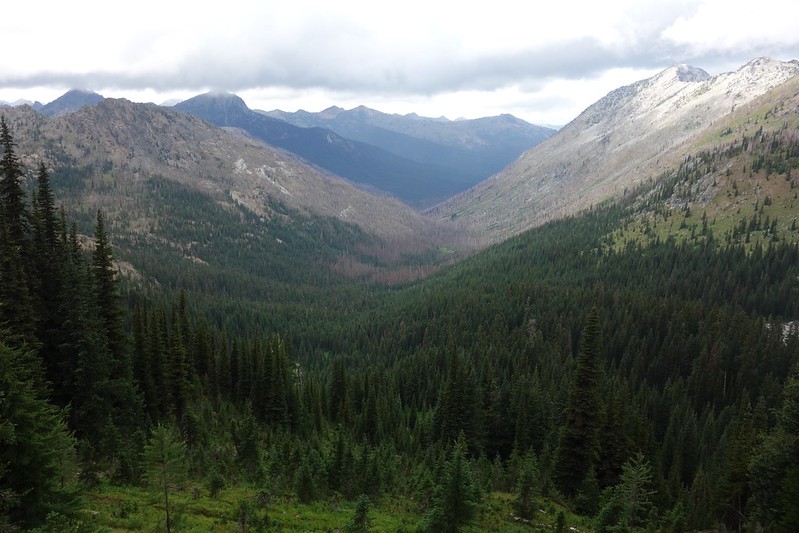 I huff and puff up the final steep switchbacks to Stuart Pass, limping a little on the uneven tread, and feel an enormous sense of relief when I hit the pass proper—an unassuming break in the ridge that separates Jack from Ingalls Creek. I stop for a long time, eating some almonds and drinking the last of my water.

“You got so lucky today.” 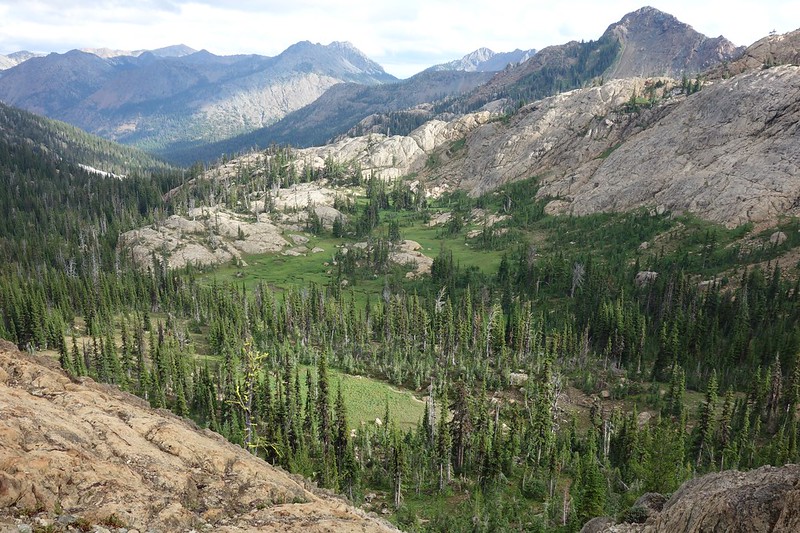 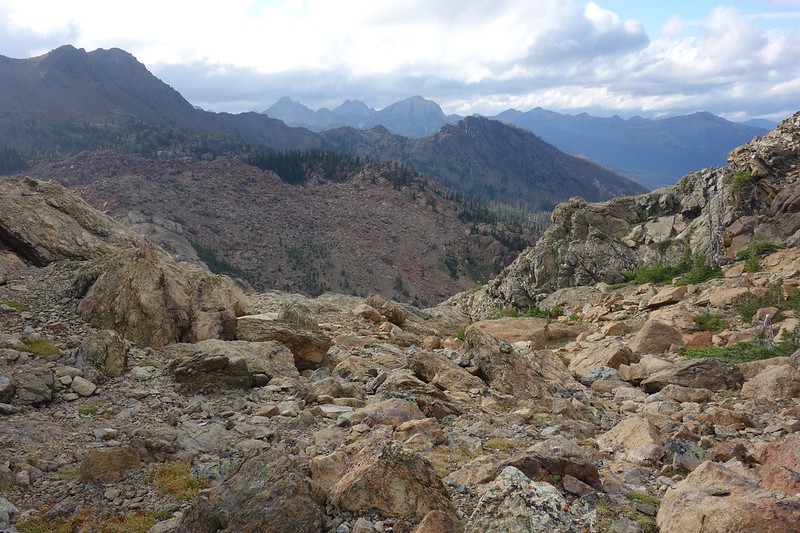 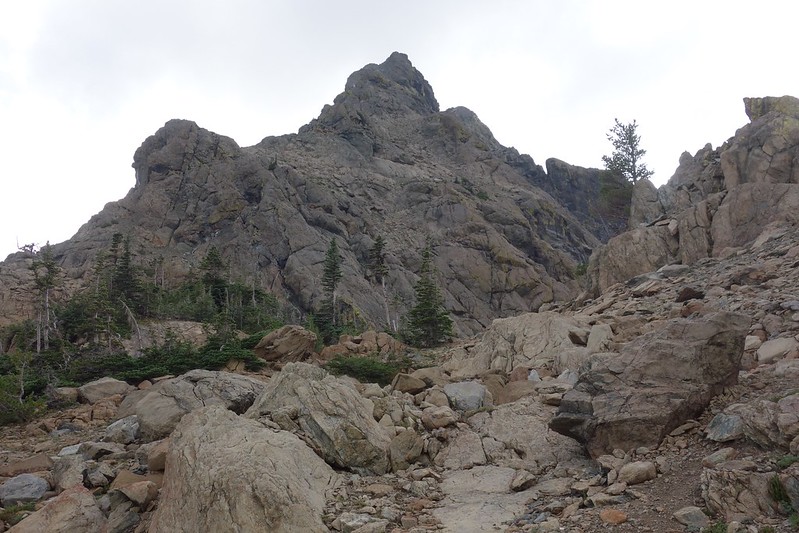 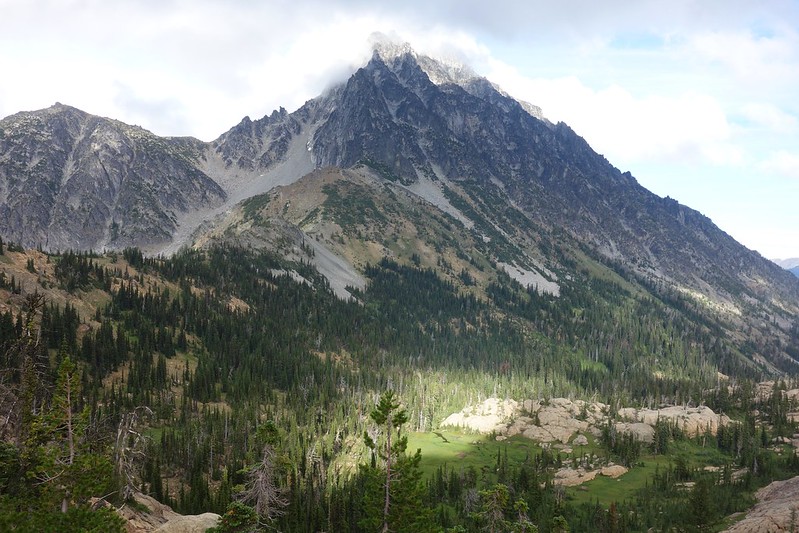 From the pass, there are several routes to Ingalls Lake. I follow the uppermost one, staying as close as possible to the top of the ridge until I’m dumped more-or-less directly onto the lakeshore. 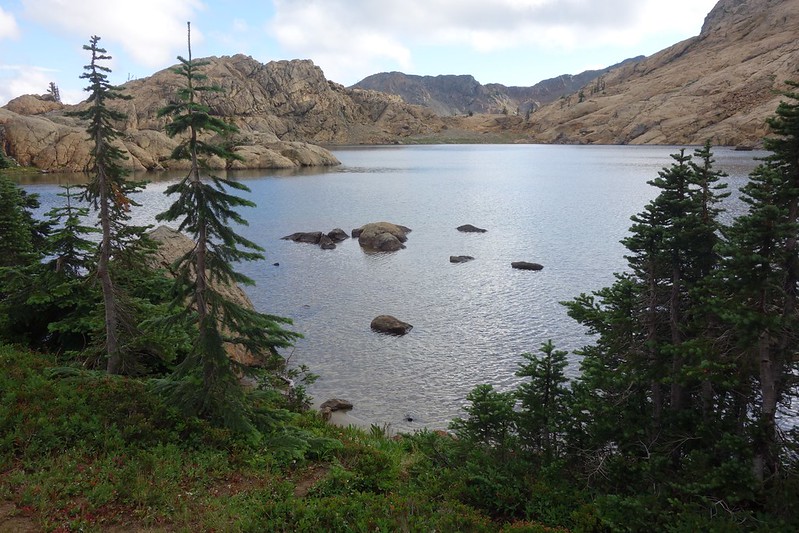 I try to follow the south shore around, and it’s beautiful, but, after a steep gully and a smooth small outcrop, I realize there’s a cliff separating me from where I need to go. I could maybe climb down it, but I don’t want to test my luck a second time. 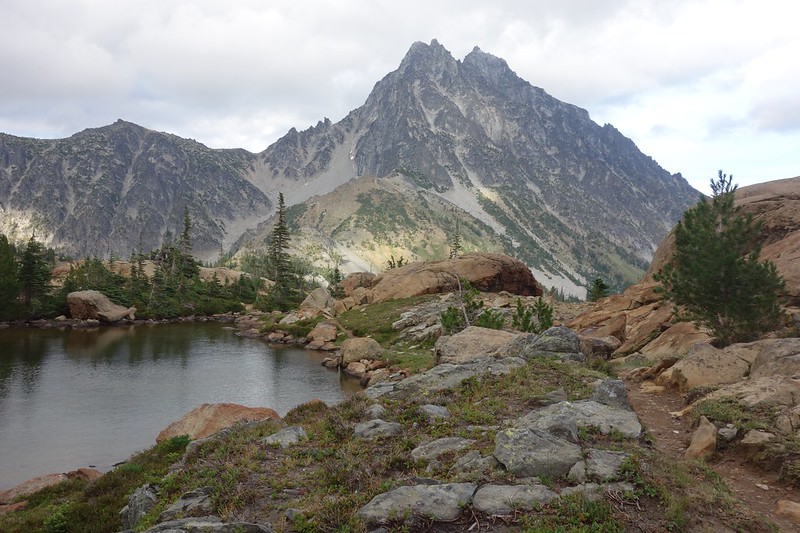 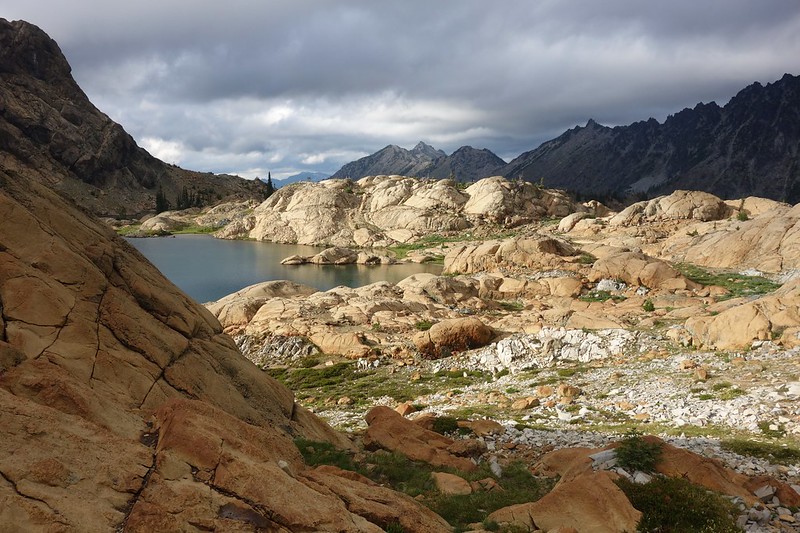 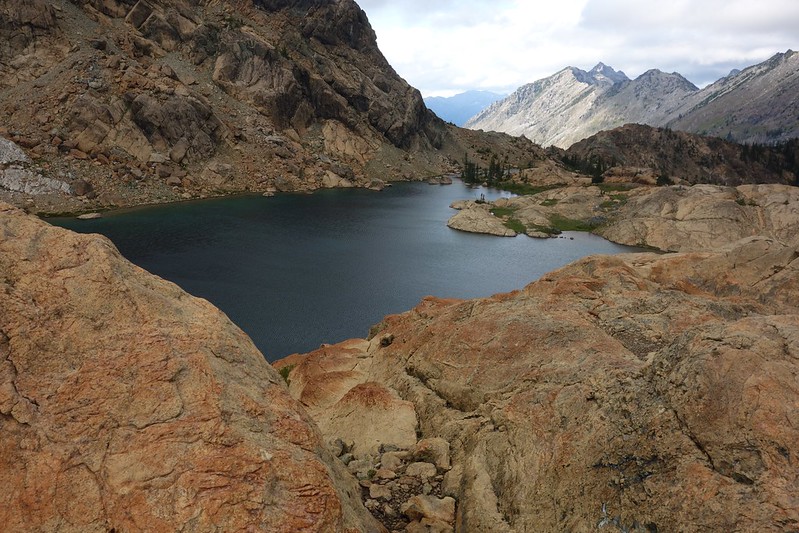 So I backtrack and hurry along the much easier north shore.

It’s already almost seven, and I have another four or five miles until my planned camp for the night. So I hurry through Headlight Basin, waving sometimes at the hundreds of campers already headed for bed.

I stop at a stream to filter some water, and am joined by an affable college kid in shorts almost as short as mine.

“My boyfriend went to sleep, but it’s barely seven!” She gestures wildly. “That’s not bedtime!” I laugh hard. “Have you been to the lake?” I tell her I have. “Don’t try to go around the south side. It, uh… doesn’t go.”

“Is that how you got those?” She points to the bandages on my legs.

She looks uncertain. “Wait, where did you start?” I start to tell her, but before I finish she interrupts excitedly: “Where are you going?”

I try to work out how much detail she actually wants. “Tonight, Esmerelda Basin.” I point, just in case she hasn’t also spent the last year-and-a-half staring at the same map every night. “Eventually, after a couple hundred miles… back where I started?”

She does a little jump. “Are you a PCT hiker?”

I’m not at first sure what she means—we’re many miles from the PCT—but I guess that, for a lot of folks, “PCT hiker” is something like shorthand for “long-distance hiker,” in the same way that, out here, I sometimes use the word “Kleenex” to designate my hand.

Walking away, up to Ingalls Pass then down the short strip of steep tread before the easy switchbacks to Esmerelda Basin, I think about that question. “Two weeks?” The first time I backpacked for more than a few days, it was with Krista on the JMT. She’d suggested it out of the blue that winter. “It’s just 220 miles and…” Just? 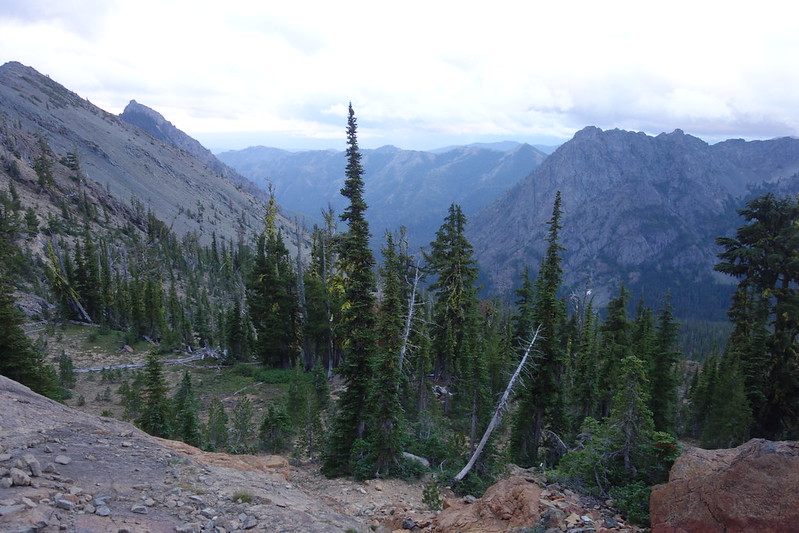 But we went and it changed my life. Now, six years later—has it somehow already been six years?—I’m here, on a walk almost exactly the same length, and, though I’m nervous, it’s nothing like it was back then. It’s comfortable. Even if my leg hurts really, really bad.

The sun sets near the Longs Pass junction. As the last light goes, I think a little on that phrase, “I’m just an amateur.” 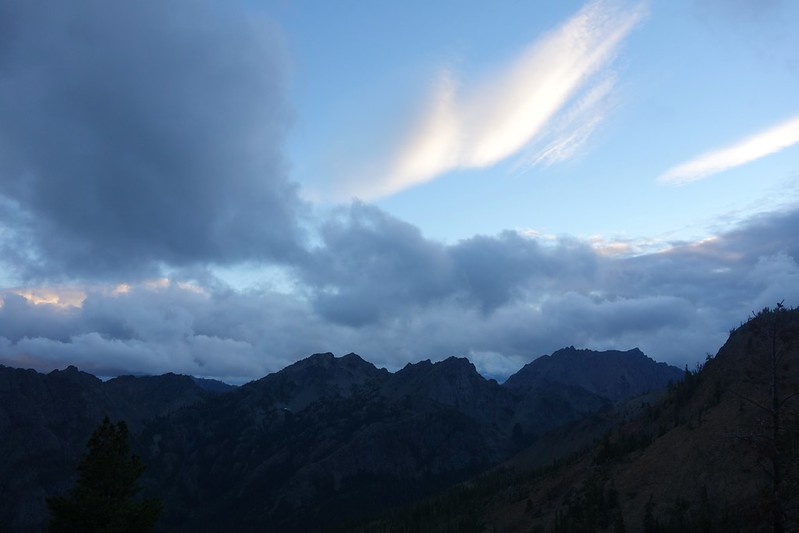 I am, of course. As my leg attests, I’m not particularly good at hiking or whatever it is I do. But there’s something deeper there too.

That word, “amateur,” comes from the old French “ameour,” and further back from the Latin “amor”—love. To be an amateur in this sense is to do something for love, rather than duty.

People sometimes talk about hiking in almost heroic terms, as though it’s some noble quest to do what needs to be done. As though we’re all Hobbits, climbing Mt. Doom to save the world. But of course that’s bullshit. This is my vacation. I’m here because it makes me happy. I’m here because I love it. Even with a leg that for some reason’s started bleeding again, even in the setting sun, miles away from camp. I’m here because there’s nowhere else I’d rather be. I’m here because I’m an amateur.

It starts to rain as I reach the forest. I’m tired and hungry and sore, and stumble a bit on the rocks as the trail finally meets the Teanaway and turns up toward Esmerelda Basin. I turn my headlamp up as high as it will go, and scan the woods for fire rings—there’s a fire ban, and anyway I haven’t had a fire backpacking… ever, but I suspect they’ll be reliable indicators of possible places to camp. And soon enough I find a grand old spot at the side of a trickling stream. The rain’s even kind enough to stop for a bit—long enough for me to put up my tent and eat a quick dinner.

“You got so lucky today.”

I re-bandage my leg in the tent, remembering too well the feeling of dried blood sticking to a sleeping bag. Then just a few minutes before sleep, listening to the nearby stream, thinking of what a wonder it is to be here. And to be whole here, leg unbroken, back only a little bruised. And I think of that woman up at Headlight Basin. “Two whole weeks!” Maybe, like Krista, she’ll convince her sleeping fella to come out on a long trip. And maybe, like us, it’ll change their lives.

We all got lucky today.