We’d been to Jefferson Park before, years ago – spent three days walking from the Whitewater Trailhead up to the park, up to Park Ridge, and back. We were exhausted afterward. We spent last Saturday there too, doing the same hike in a day. And we were fine afterward. There’s something wonderful about that. 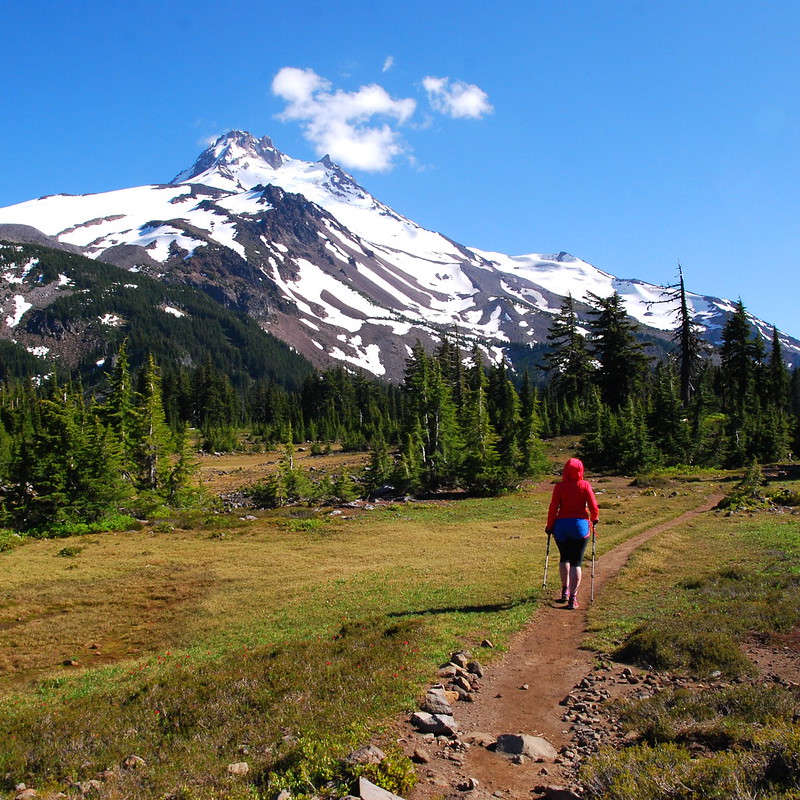 We leave Portland around six-thirty and, after some futzing with breakfast, get to the trailhead just after nine. Not bad! Whitewater Road (FR 2243) is much better than I remember it. There are a few potholes at the very beginning, but otherwise it’s just smooth sailing. I can’t tell if the road’s changed or if I have. Probably both.

The trail enters the Jefferson Wilderness immediately, and, for the first few miles, passes through largely anonymous forest. There are a couple nice viewpoints after the Whitewater Trail joins with the Triangulation Trail (3373) at the top of Sentinel Ridge. 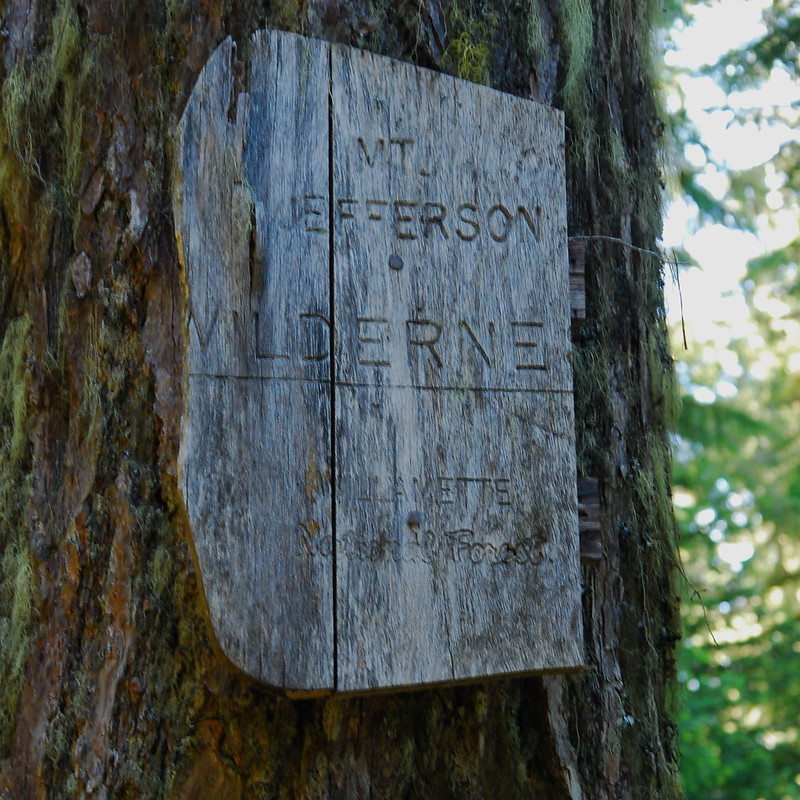 The view west, toward the Whitewater drainage: 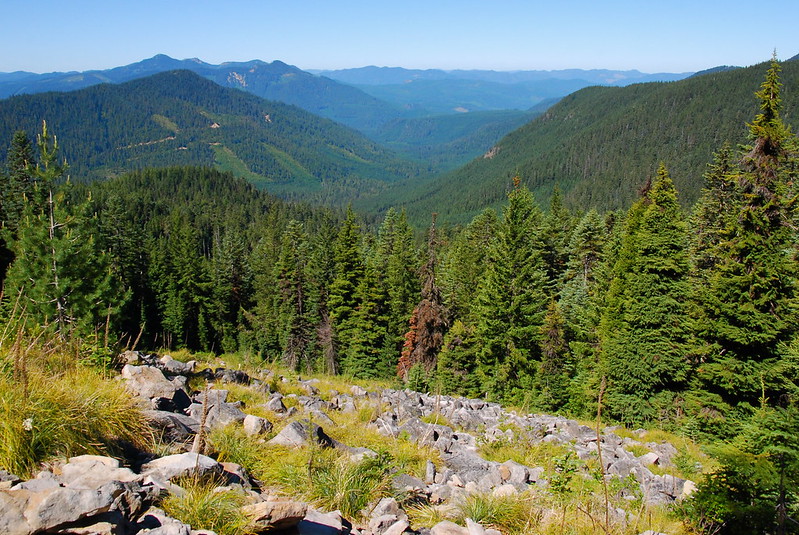 As the trail passes below the Sentinel Hills, there are a few small patches of bear grass. Every time I see bear grass, the thousands of flowers, it feels like magic. 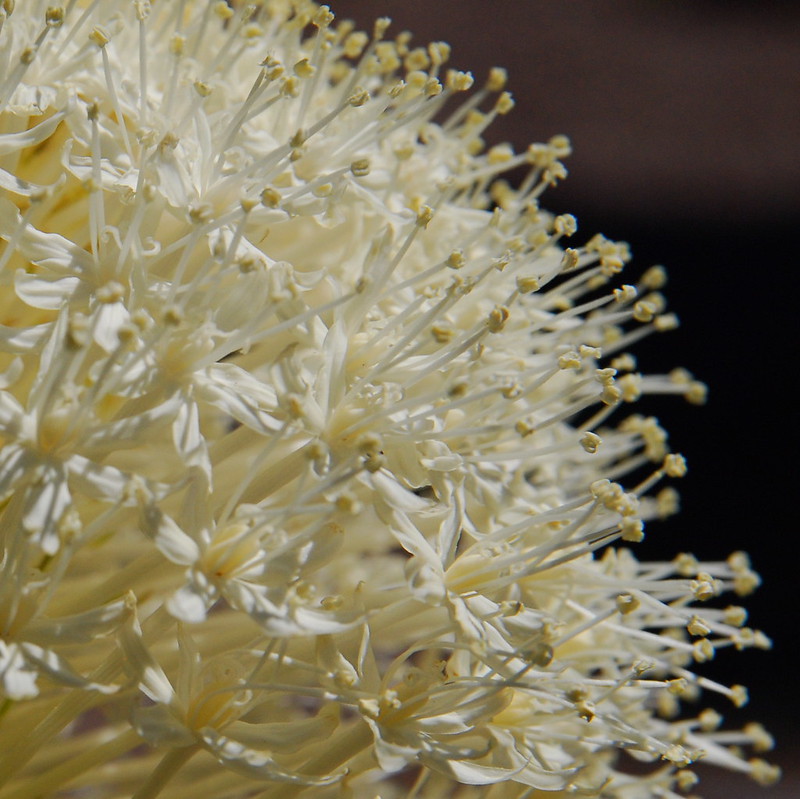 There are a bunch of other things, too. My favorite isn’t exactly a flower… yet. Stonecrop! It’s everywhere on the slope south of the Sentinel Hills, and it’s gorgeous. 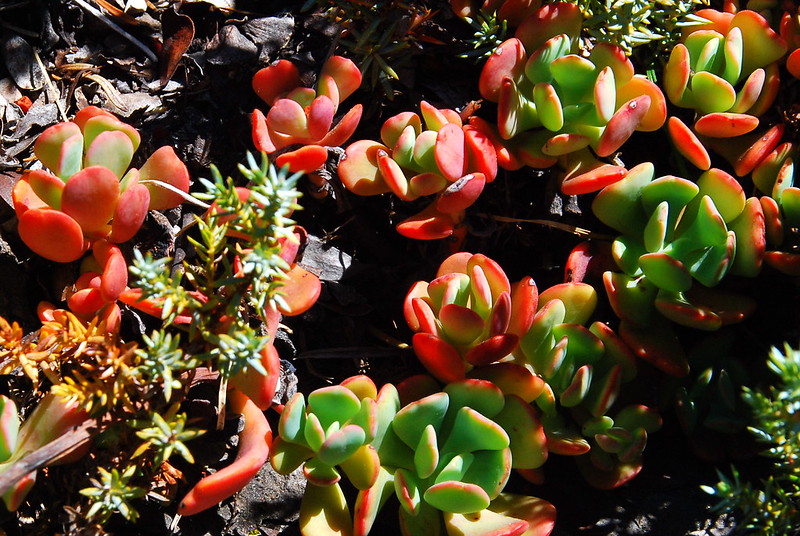 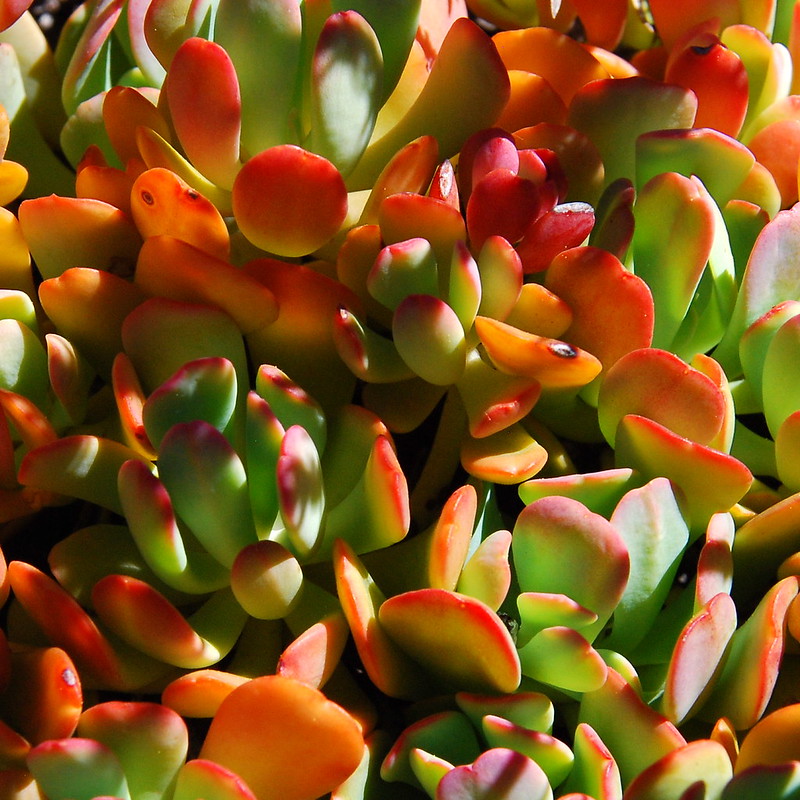 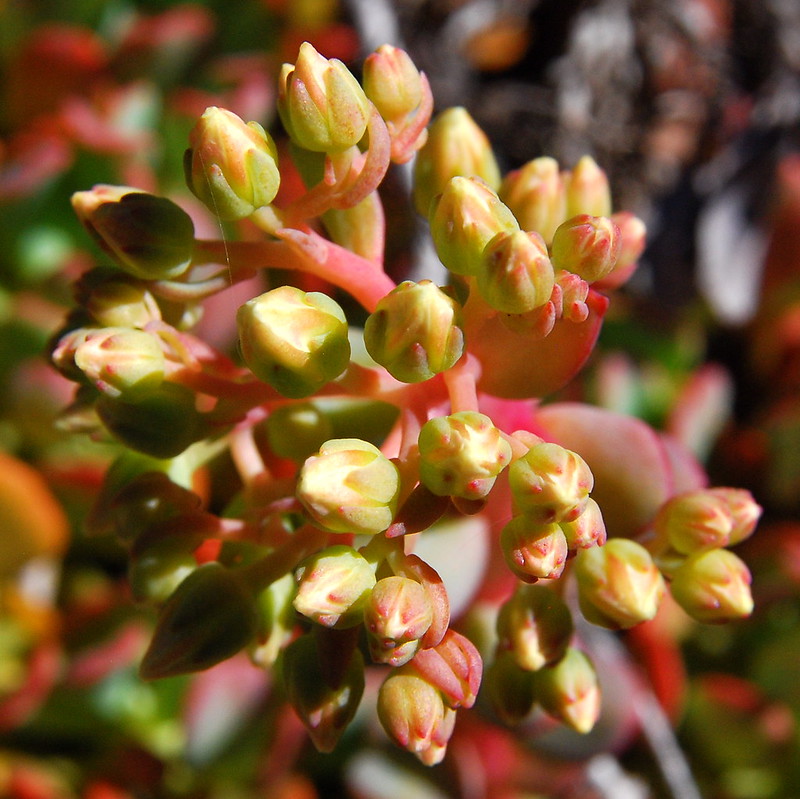 This section also offers the first good views of the mountain. Hug it out! 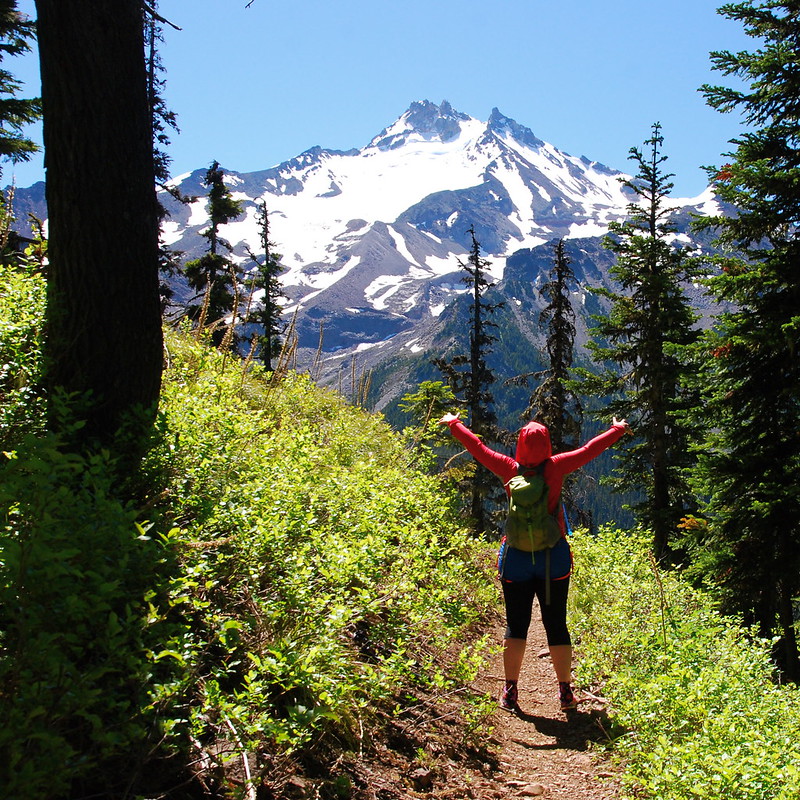 As we descend slightly toward Whitewater Creek and the PCT junction, lupine and a few other things pop out. Lupine: 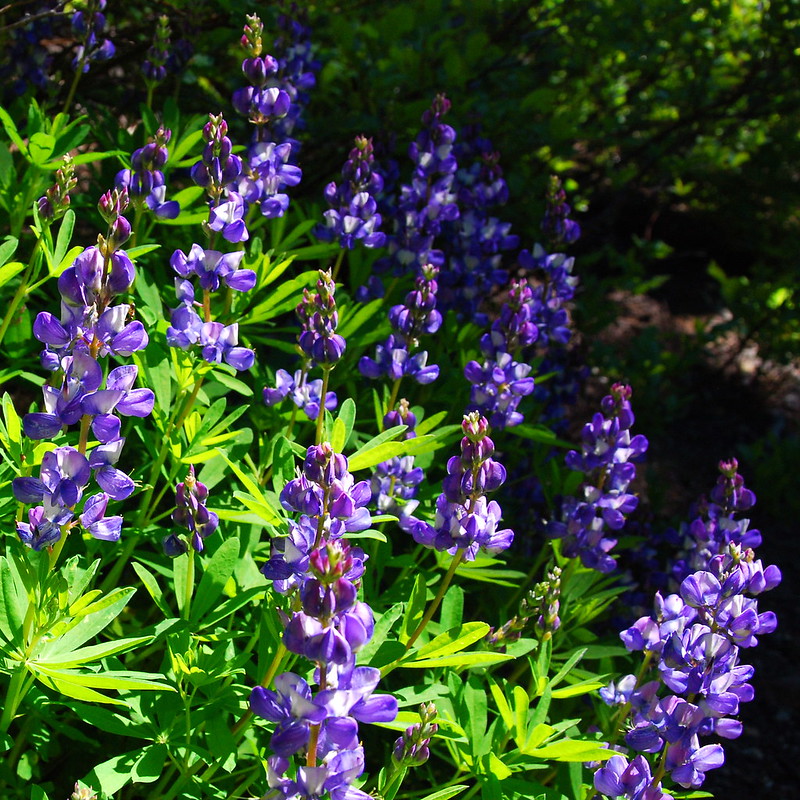 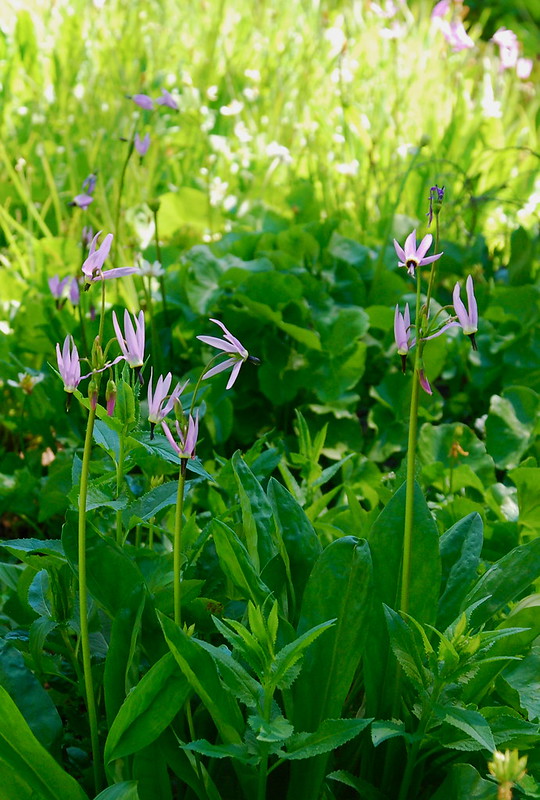 And then… pandemonium! After crossing Whitewater and ascending to the PCT junction, the mosquitoes are suddenly out in force. While swatting our legs, we decide to motor through the park itself, then take a long break on Park Ridge, where there will hopefully be some wind and less chance of bug-induced insanity. But I do stop for a few pictures. There are as many flowers as there are bugs. Millions. 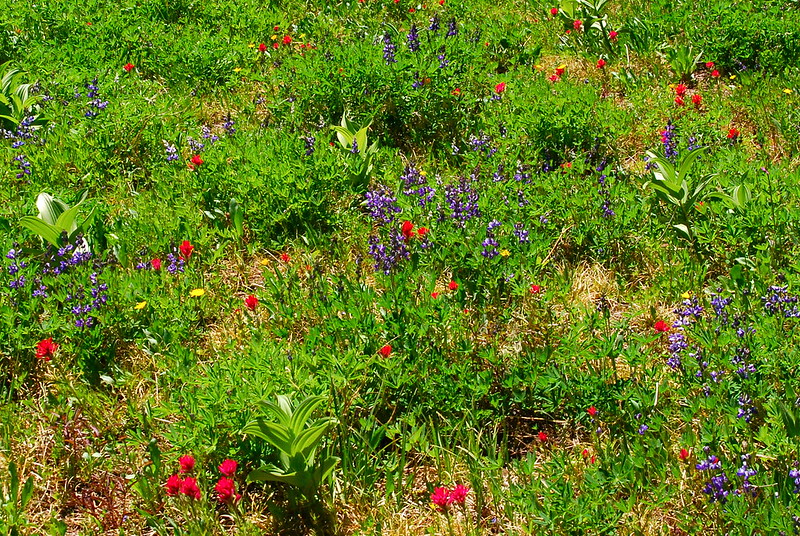 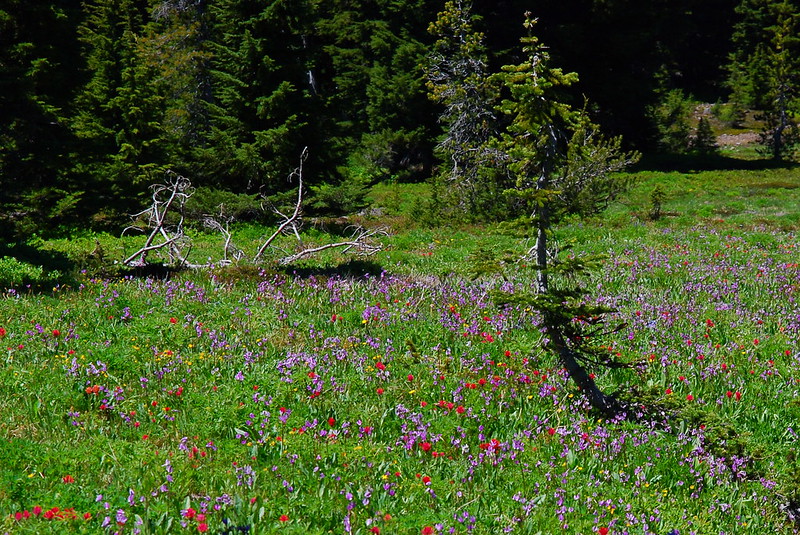 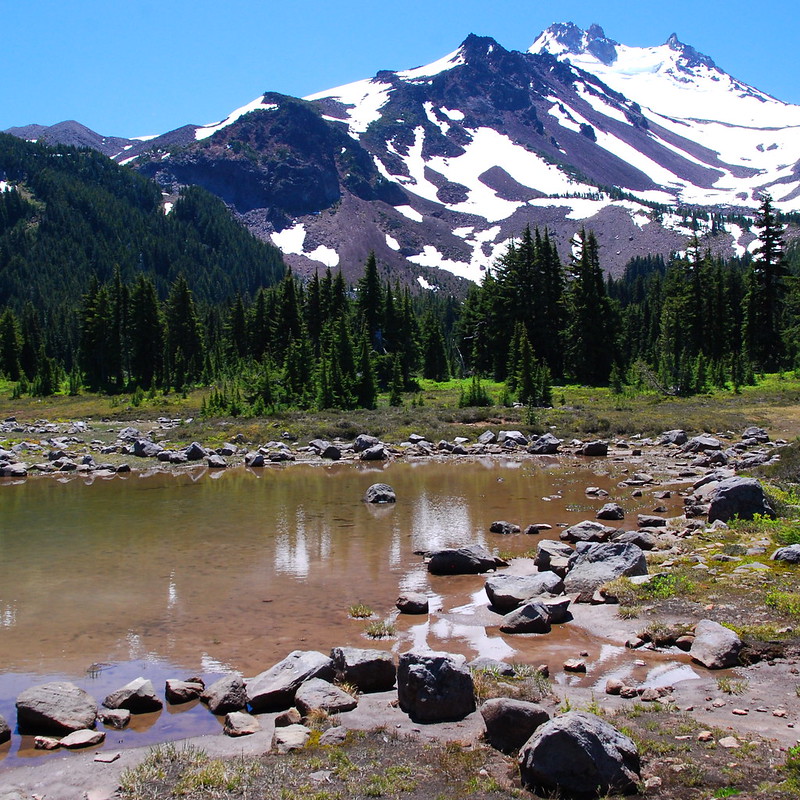 One of my favorite parts of the trail comes as the PCT passes just east of Park Butte, crossing the headwaters of the South Fork Breittenbush River. Hard to the capture the majesty of it all in just one picture. 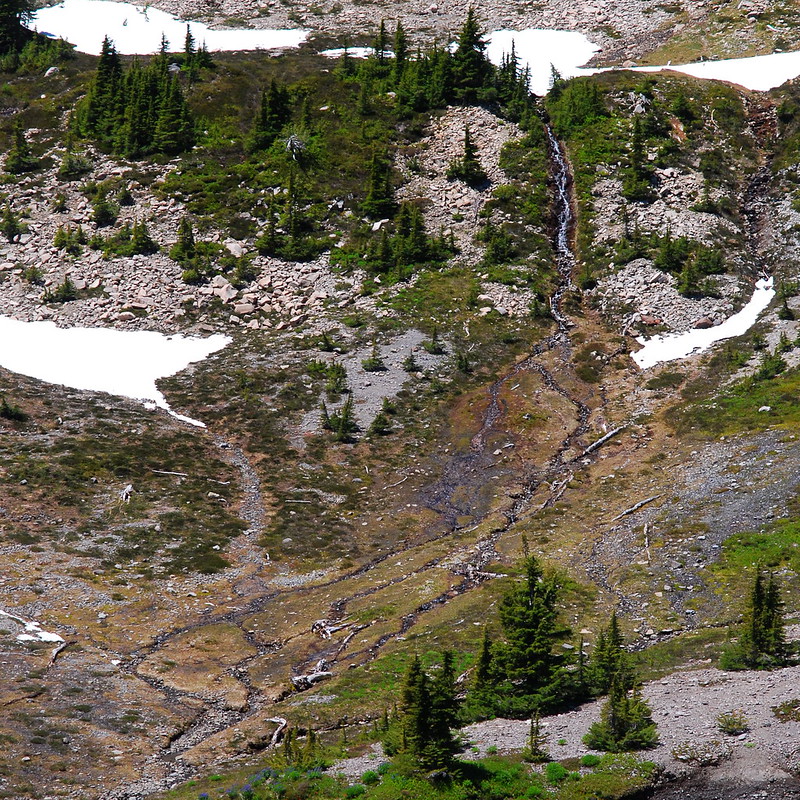 And Park Ridge is, of course, marvelous. Here’s a panorama of the view looking north toward Olallie Butte and Hood.

And here’s the view looking south, back toward the park and mountain. Russel Lake’s on the left, Sprague Lake, still frozen, is on the right: 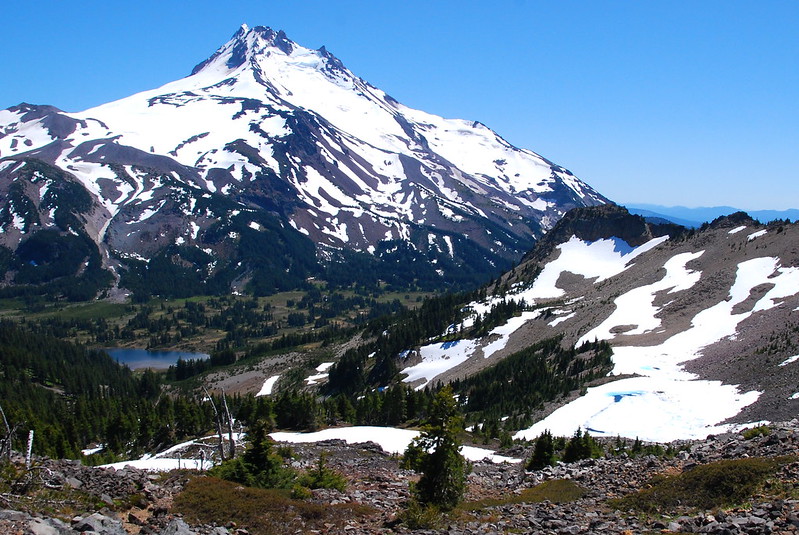 We have lunch on the ridge, where we are joined by several backpackers, who have apparently spent Friday night in the park, then traveled up in the hope of finding something less buggy. There’s also another group camped on the high point just west of where the PCT passes over the ridge. Crowded up there! And that’s not even counting the throngs of hungry bugs.

On the way back, we decide to descend down to Sprague Lake, just south of the pass, then return to the PCT as it crosses the lake’s outlet stream. This turns out to be a very, very bad idea. The path down to the lake is very easy, very well-traveled, and very worth the trip if you’re on Park Ridge. But getting from the lake back to the PCT is surprisingly sketchy. It’s doable as a steep scramble, but it’s definitely harder than it looks from up above. Best probably to go down to the tarn as an out-and-back, then descend on trail. We struggle and slip down the beautiful slope. 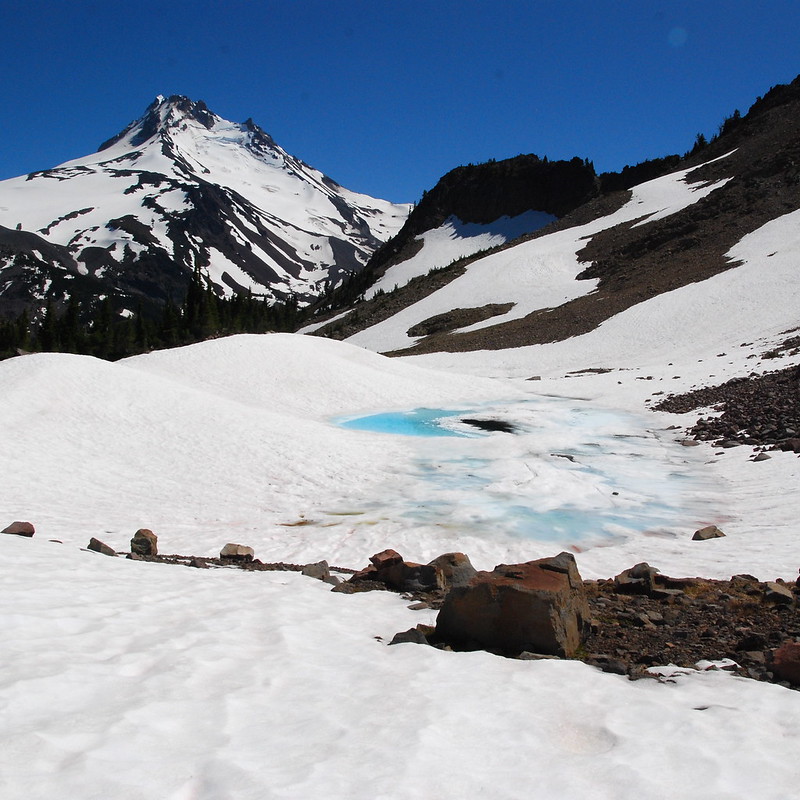 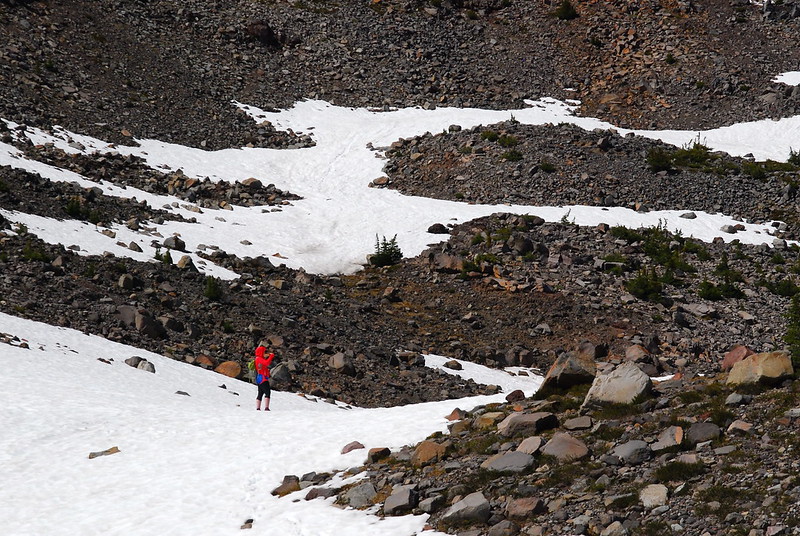 We eventually do make it back to the PCT, considerably worse for wear, and the mosquitoes are excited to see us. I guess they’re glad we’ve made it in one piece? I wonder, briefly, if they bite dead things. 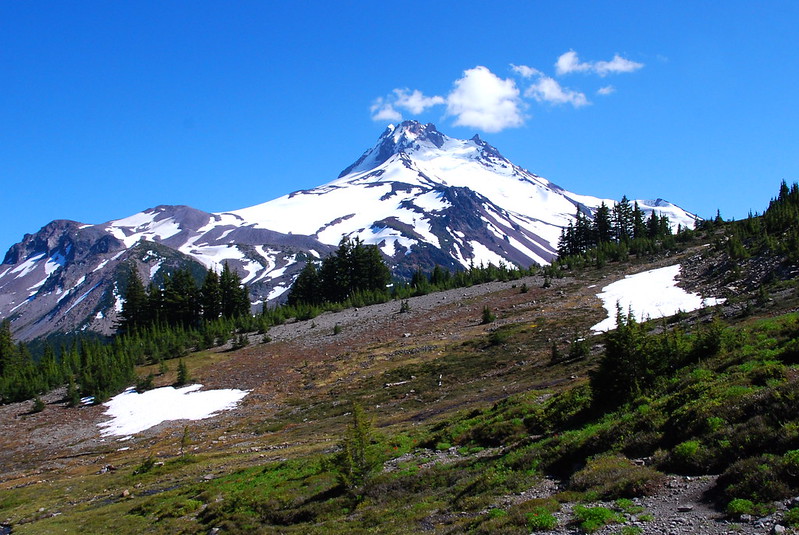 We’ve been vaguely planning on stopping at one of the lakes on the way back, but the bugs are so bad that we hightail it out of there, not really stopping until we’ve left the PCT and crossed Whitewater again. Then it’s just an easy walk back to the car, as the sun, for the first time today, starts to mellow. Maybe we’ll come back in the fall, when the bugs are dead and the huckleberries are out. It’s only a day, after all.