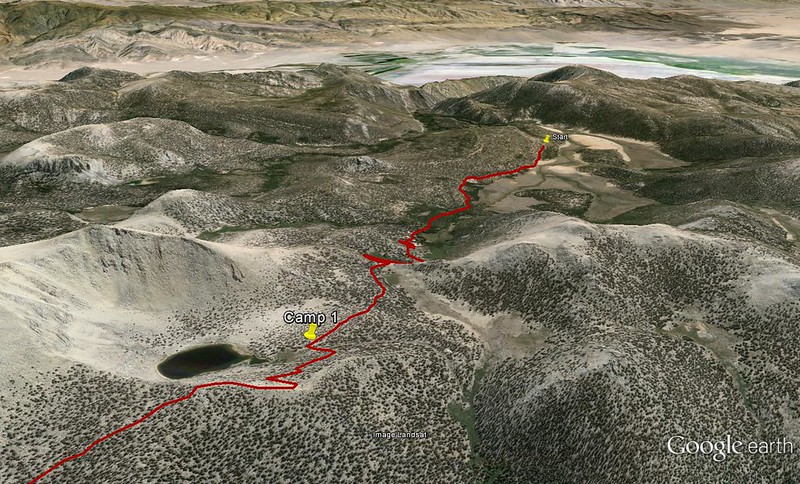 I sleep strangely, apprehensive and excited all at once, and wake up with butterflies. We pack our packs for the first real time of the trip, shuddering under the weight. They’re the second heaviest they’ll be, with five days’ worth of food and a few liters of water each. Later, further north, where the desert gives way to mountains, we’ll pack only a liter each of water. But here…

We eventually emerge from the dark, cool room into parking lot, already bright and hot with desert sun, and drop off our room key at the motel office. We’ve made a reservation for a ride with Paul at Eastside Sierra Shuttle, to be picked up at the McDonald’s at 8:45 – the McDonald’s is, apparently, something close to Lone Pine’s town square – and so we hoof the half block there, buy breakfast and several liters of coffee, and wait.

We only wait a few minutes. It’s just 8:30, but Paul rushes in, apologizing for being late. There are already a couple guys in his minivan, each with packs the size of people. We gingerly secure ours to a rooftop rack.

The guys are a father and his adult son in his mid-30s, both from San Diego. The dad did a little backpacking years ago, but hasn’t been out for a long time, and it’s the son’s first trip. His outfit’s halfway between yoga clothes and motorcycle gear. They’re both friendly and excited and clearly even more nervous than us. It somehow puts me at ease.

Last night, the sunset shed light on a small, jagged cut in the mountains – an old mining road, we thought – which seemed to run straight up. This is, it turns out, the road to our trailhead.

Paul is utterly unconcerned, and chats amiably about wildflowers and trees in the area. There’s a book about Sierra wildflowers in the backseat. Everything’s been early this year, just like in Portland. I guess he’s a school teacher. We round a corner, and I think he senses my nerves. “You can trust me, because I don’t want to die either.”

We tell him about the smoke, and he sort of laughs it off. Sequoia and Kings National Parks apparently asked their rangers to leave a few days ago, but he doesn’t seem to think it’ll be much of a problem. “Maybe they’re just tired.” As we ascend, the sky is deep bright blue.

An hour or so later, Paul drops us off at Horseshoe Meadows – a massive complex of parking lots and campgrounds. We both gulp. Here goes nothing. 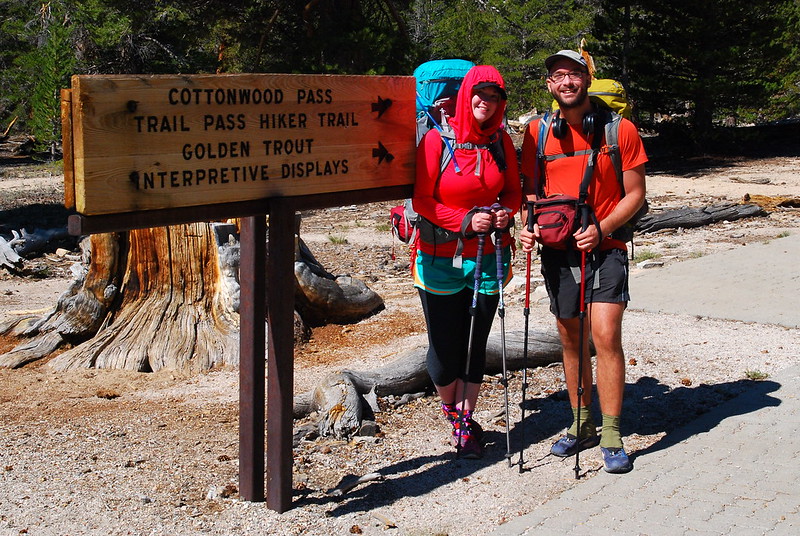 We sit for a while drinking water from a nearby well – the last we won’t have to filter for a week – until we get up the nerve to start moving.

The trail from Horseshoe Meadows to Cottonwood Pass is very gentle, gaining just a few hundred feet. At first it’s broad and sandy, like trails in the Three Sisters. We walk alongside a meadow full of pasturing cows, a whole herd of them, which look up just long enough to see us before getting back to the business of eating.

Many of the trails in the Sierra started life as routes shepherds used to take their flocks up into the hills in summer. Or, okay: many started life as routes used by Native Americans – the Paiute, Mono, Miwok, Kawaiisu, Tübatulabal, and others – for trade and, occasionally, war across the mountains. But the routes were formalized for European audiences by the shepherds who, for a century, were, along with the occasional prospector, the area’s main inhabitants. John Muir’s first trip here was actually at the behest of a shepherd, who’d hired him to tend his flock in the high hills. People forget that now.

The trail’s gentle, but we’re both having a rough time with the elevation – the pass is something like twelve-thousand feet above sea level – and so it’s slow, slow going. 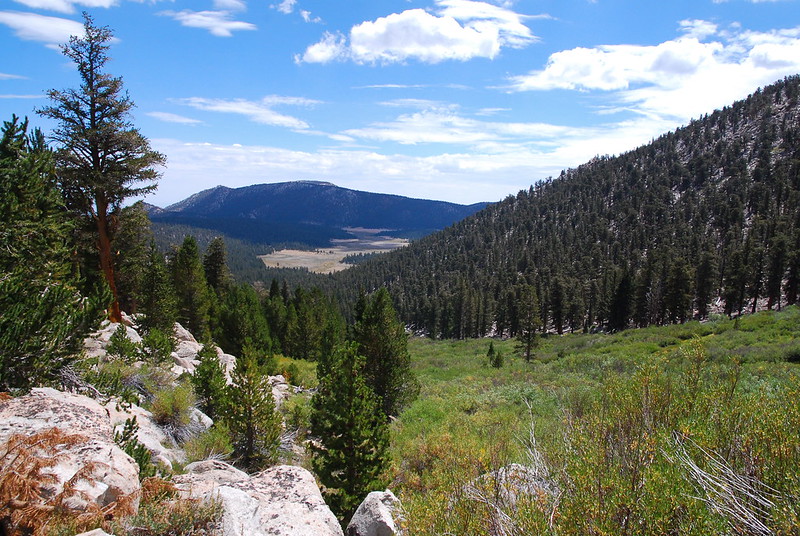 I reach the pass a touch before Krista, and wait for a while. Kennedy Meadows, maybe fifty miles south of here, is generally considered the dividing line between the Mojave and the Sierra. But, looking south, it all still likes desert. The lake where we’re headed tonight is the first lake northbound PCT hikers see, 750 miles into the trail. 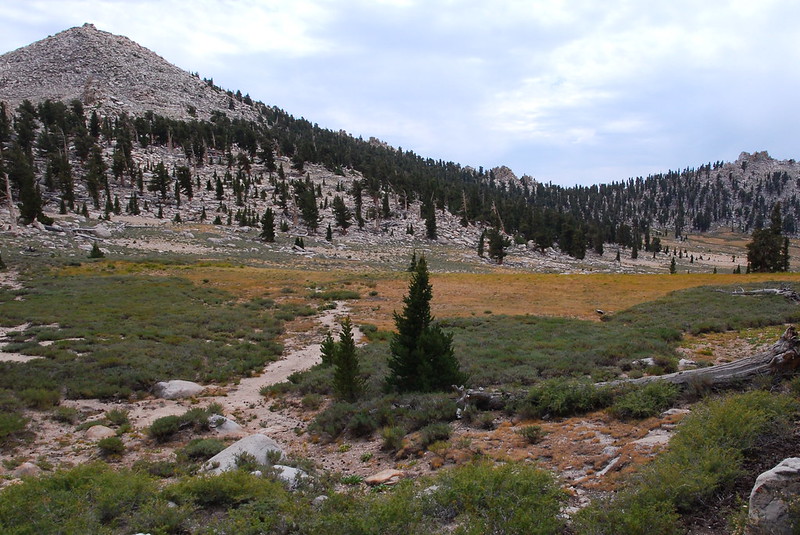 I wait a while longer. Just as I’m starting back to look for Krista, she comes stumbling up the last switchback. She’d passed out just a few hundred feet down the way. There’d been enough time to sit down, and it was apparently just a few seconds, but it’s enough to scare us both pretty badly, and we decided to stick closer together for the next couple days, just in case. I feel really shitty about not doing this from the outset.

From the pass, it’s only another mile or so to Chicken Spring Lake. I don’t know what to expect, and have sort of prepared myself for nothing much – a short stop off on the way to better things – but, when we get there, it’s beautiful. For the first but certainly not last time, I’m reminded of the Alpine Lakes in Washington.

We make it to camp quite early, especially by our standards, so I take a dayhike around the lake, and up a bit to get a better view. 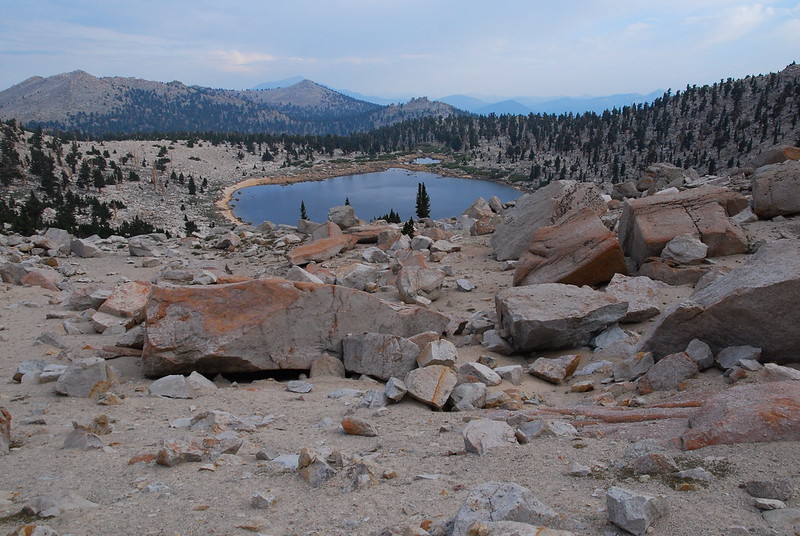 As I climb above the lake, half a dozen marmots scuttle back into their holes, and pikas whine at me from every direction. It’s all craggy granite and struggling grass up here, but somehow there’s enough to sustain all of them. There are small spent bundles of grass poking out from under rocks – leftovers from the pikas. It all feels like magic – a magic world to which I don’t, and can’t, belong, which doesn’t need me. This all persists in spite of, rather than because of, visitors like me. I think of Groucho Marx: there’s something wonderful about a club that would never invite me to join.

We make macaroni and cheese for dinner – comfort food, as we’re both pretty nervous about what’s to come – and turn in early, exhausted by the last few days of traveling. 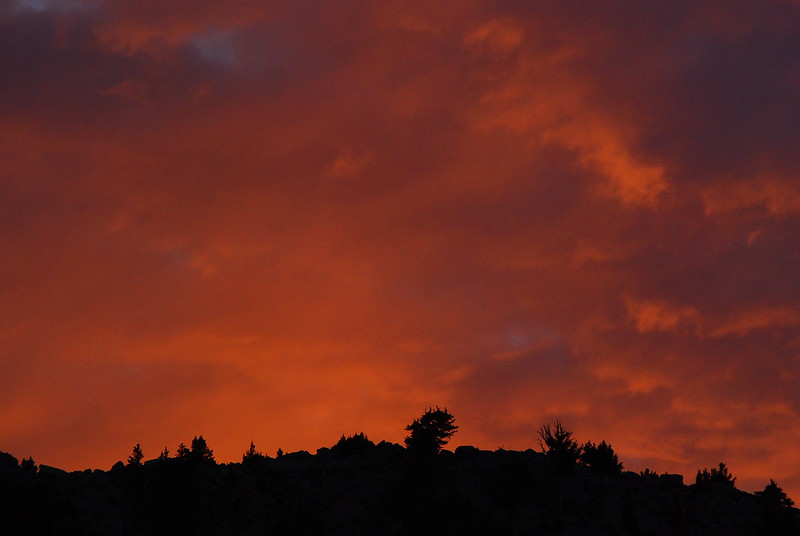 A few hours later, maybe around midnight, I’m woken by a loud stomping. There are loud persistent thuds, and some sort of rustling in the tent. I wake Krista. “I think there’s a bear in the tent.”

She tells me that no, there’s no bear in the tent. She hasn’t heard anything. And she goes back to sleep.

I think through the possibilities. I hear a sound and she doesn’t. What could explain this? Maybe her hearing is off because of the altitude thing? No, that can’t be it, because she’s just heard me ask her if she’s heard anything. So her hearing is normal. Maybe mine’s just better than hers? No, that can’t be it either, because I’m wearing earplugs.

Oh. Right. I’m wearing earplugs. Suddenly I realize that the stomping is coming from the inside of my head – it’s my heart beating. And suddenly too I realize that, with every beat, my head’s pounding. And I can’t really breathe. The problem isn’t with Krista’s altitude sickness, it’s with mine, which has apparently somehow gotten delayed on its way to me.

I try to relax, breathe slowly and deeply, and a couple hours later it fades away, though I feel it for the next few days.

2 thoughts on “JMT, Day 1: Altitude Sickness and Bears in the Tent”