We pour some coffee, kiss the cats, load the car, and we’re off. I5 south. There’s a hot air balloon show somewhere south of Salem, bright striped globes in the sunrise. Krista wakes up for long enough to tell me the world’s magic.

Then smoke. It thickens the further south we go, until we turn off just past Eugene, and we can barely see a hundred feet up the road. It feels like a tunnel as we speed east, over Willamette Pass, then south to Klamath Falls. The world’s a formless grey.

We cross into California and the sky begins to clear. The road’s rough now, full of potholes and ruts. And it’s hot. But the miles go fast, and soon we’re turning into Eagle Lake—a small splotch of blue on our map, but here a huge expanse.

The north shore’s all closed campgrounds and ancient National Forest signs. The west’s all houses, all with well-appointed docks. But the docks now stand twenty feet above the water, overlooking acres of muddy marsh. Boats molder fifty feet from the shore, half-covered in mud.

This is the second-largest natural lake in California, after Mono. And it’s clearly been well-visited, once. But now the place is almost completely deserted. There’s a shuttered old resort with a shuttered old restaurant. A battered old sign: Bud Light and Burger, $5.99. The deck’s missing half its boards. The only business with any life left in it is a real estate office, which has seemingly been busy placing “For Sale” signs in front of almost every house. One after another, as regular as mailboxes.

This is not the austere beauty of abandoned ruins. It’s the saccharine desperation of a going out of business sale, a department store on its last legs. Soon they’ll start selling the mannequins.

There are no humans, but hundreds of birds surround the shore, digging in mud and landing in the shallows. Fishing. Krista points excitedly, “Black Ibis!” I have no idea what she’s talking about, and think about those early trips, years ago, when she named all the flowers. When my world got bigger.

Back on the main road, there’s a herd of strange horns along the eastern shore. We pull over. Pronghorn antelope! I’ve never seen one before in my life, and for a while we just stand there, parked along the highway, hazard lights flashing into the empty hills. I feel like those feral kids in True Stories, standing at the edge of civilization. Only the edge here isn’t from a rising tide; it’s from one falling. 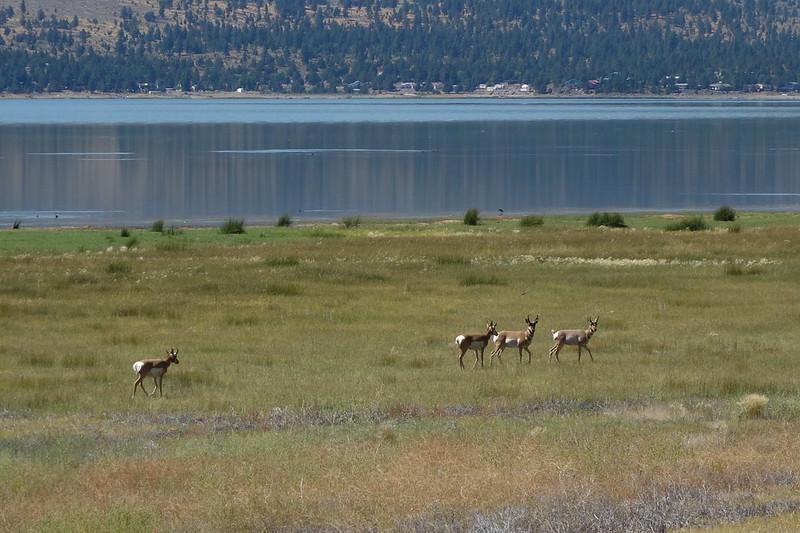 More miles: past an antelope reserve and a prison and into the endless empty expanse that surrounds and seeps into the towns here. Then Reno, a traffic jam with no destination. We pullover at a warehouse-sized truck stop. Every pump has a TV attached, tuned to a network that is apparently produced exclusively for use in gas stations.

Inside, it’s a postmodern paradise. Aisles of chips stretch far enough that they almost begin to disappear in the horizon, with labels in English, Spanish, and some new language of emojis and exclamation points. There’s a wall-sized fountain drink machine. One could almost stand upright in the deli case.

There’s a sort of Frosty machine on the opposite wall with a dozen flavor options, including three iterations of Mountain Dew, all of which are named after natural disasters. And there’s Dr. Pepper. Krista gets a large, and it’s a revelation. The texture seems impossible: thick and weightless, granular and smooth. It seems to stay frozen long after you swallow. And it tastes exactly perfect.

We drive through rush hour Reno, passing the Frosty back and forth, listening to early-90s pop, which is inexplicably playing on several radio stations simultaneously. I feel about Reno the way I feel about shopping malls: I don’t come often, but, when I do, I can easily imagine happily living a form of life that is completely different than the one I am living now. And afterward, I’m a little grossed out.

The city ends suddenly, like it always does. Then we climb out of Nevada and up into the hills, along the Walker River. The sun starts to set. Every turn is intolerably beautiful, the sort of thing that makes you want to just get out of the car and start a rousing round of applause. I turn and look at Krista long enough to tell her that the world’s magic. 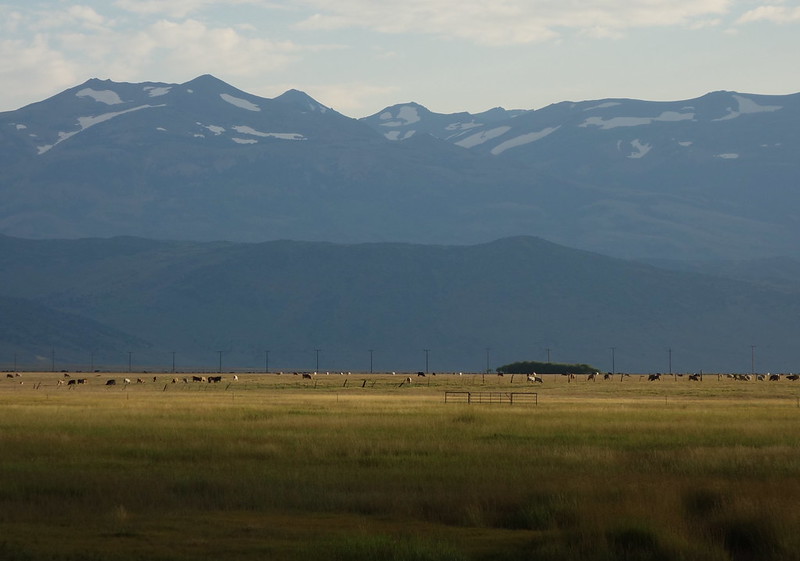 We drive up thousands of feet to a minor pass, and then suddenly it’s here: mountains stacked on mountains, watching over Mono Lake and the broad Owens Valley. The sky’s all purple and it’s raining in the gentlest way possible, just enough to make you feel connected to the clouds. 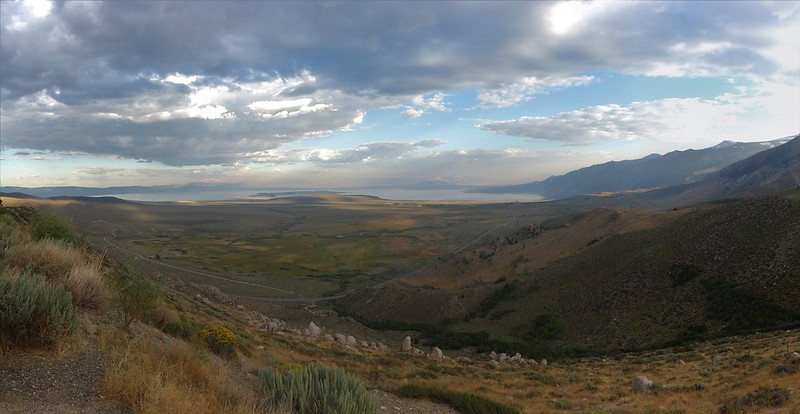 We pull over and I tear up. I can’t begin to describe how much I love this place. My heart hurts and goes heavy. Krista tells me “We’re here.” There’s so much in her voice.

There’s more smoke as we pass Yosemite, but it’s gone quickly, and spend the last of the light looking up into the Minarets. We make smalltalk, but it’s about as meaningful as the rushing wind outside. “We’re here” is all either of us need to say.

I think of the first day of summer when I was a kid, the feeling of endless opportunity before freedom had taken shape. Bike rides and rivers and shitty stolen beer. Warm skin in the late-night sunset. This feels like that. We’re here.

The next morning’s a flurry of activity: weird packaged breakfast in the hotel, permits at the Bishop ranger station, another breakfast and sandwiches to go at Schat’s Bakery.

Then we drive up into the hills, thousands more feet into a broad valley bordered by vertical granite walls, then on a thin Forest Service road along the side of a steep cliff. We park at North Lake, in a generous lot half-full of cars that all look like they’ve been here a while.

We’re an hour early for our shuttle, but we’ve only just begun to scuttle our stuff together when it arrives. Or I should say he arrives: Paul, the same guy who drove us from Lone Pine to Horseshoe years ago.

We rush around, making sure everything’s set, then trundle into his van, excited and unready all at once.

He deftly drives us down the same road we came up, the whole time talking idly about nothing: the mountains, bears, climbing, smoke, the Los Angeles Department of Water and Power.

The Water Wars here are well-documented, but Paul’s got an interesting take. To take the water, LA first had to buy the land. So the Water Department now owns most of the valley, and keeps it in a state of suspended animation: not the verdant farmland it was before the first aqueduct in 1913, but not a modern development either. Although the land’s been drained, it’s been otherwise left alone.

I don’t know what to think about all this. The goodness of what’s left isn’t simple or pure. But I wonder how much room is left for simple, pure wilderness.

Paul drops us at the Onion Valley Campground, where we quickly find a spot and setup for the night. As soon as we do, I feel ridiculously relieved. We’ll spend the day here, getting used to the altitude, then hike out tomorrow, up into the wild hills. We’ve done the hard bit. All that’s left is the walking. 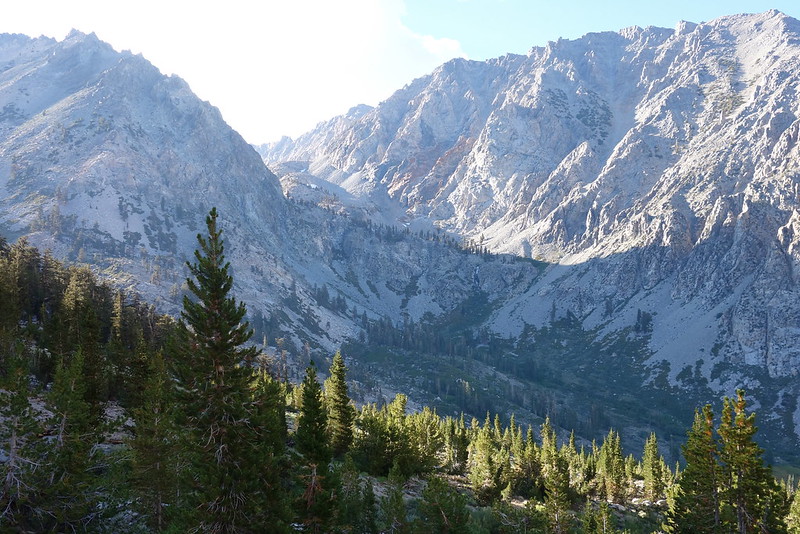 We spend the day in camp, eating our sandwiches, hiding from the sun, and sitting by the small creek that runs just west of here. We’re both a little headache-y. I feel winded walking across the parking lot. But that’s all to be expected, and it’s nothing compared to a few years ago. I’m not hallucinating… yet?

In the evening we take a “short” acclimation hike up to Robinson Lake. Just a mile and 500’ up! But, well… it’s not that. I’ve spent most of the summer with a map of the Olympics with 100’ contour lines. Our new map’s 300’, but I guess I didn’t bother to look.

So we walk up a mile and 1500’. After the first 1000, Krista gets a little suspicious, but doesn’t say anything. I stammer. “I, uh…” She smiles with the double joy of having a husband who’s wrong, and who’s about to have to admit he’s wrong. “I think I may have read the map a little… imaginatively?” She smiles bigger.

The lakes’ beautiful, though: a long still blue pool, at the foot of a long valley that reaches all the way up from here to the main Sierra Crest, a mile-and-a-half away. 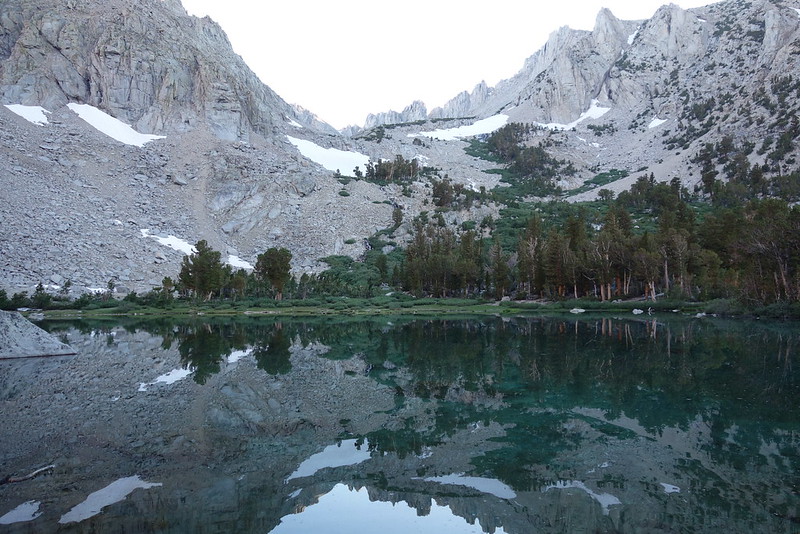 We filter some water, eat some snax, and reluctantly note that, with the sun going down, it’s maybe best to ramble back to camp.

The walk down’s much easier than the walk up, picking our ways through the rocks and rubble as the light turns red on the Inyo Mountains, across the Owens Valley. 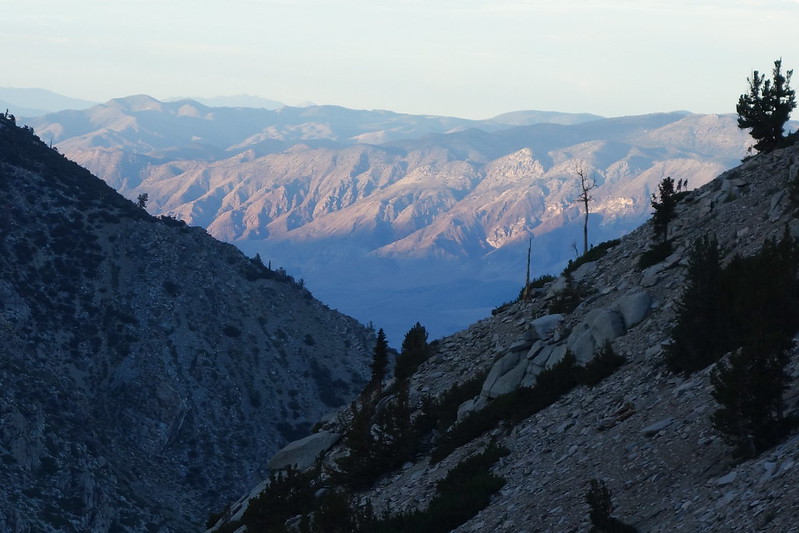 We reach our camp just as the sky goes full dark, and set about doing the usual camp chores: filtering water, making dinner, laying things out for tomorrow.

Stars come out in waves as the sky gets darker, until the whole thing is full of light—bright splotches and thin pin pricks, the Milky Way’s foggy shade. We stay up late, lying on the picnic table, holding hands, telling each other that the world’s magic.

One thought on “Back to the Sierra: Getting There”