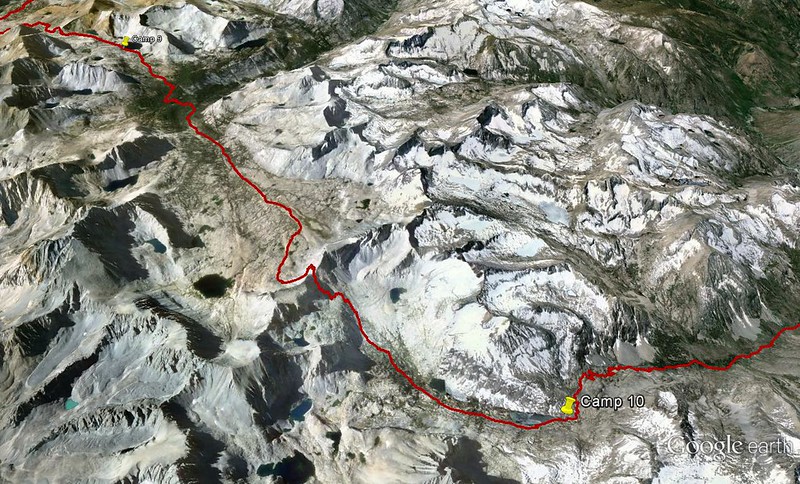 We wake up early again, around five, and I stumble out to start packing. Fetch the bear barrels, take out food for the day, stuff it all in my pack, take down the tent. It’s all becoming so rote.

The tent’s frozen solid with condensation. Everything is. As we roll it up, it crinkles, and it’s so quiet here that the crinkles echo off the lake and around our basin as the sky slowly turns from black to blue. 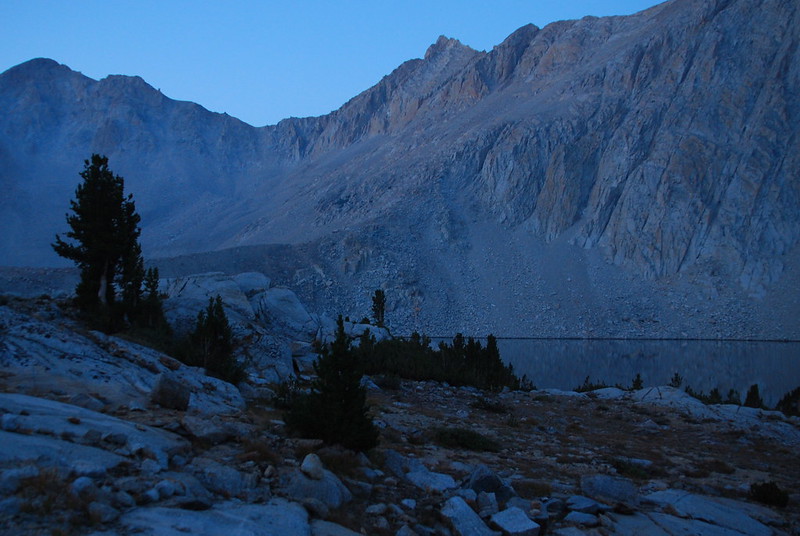 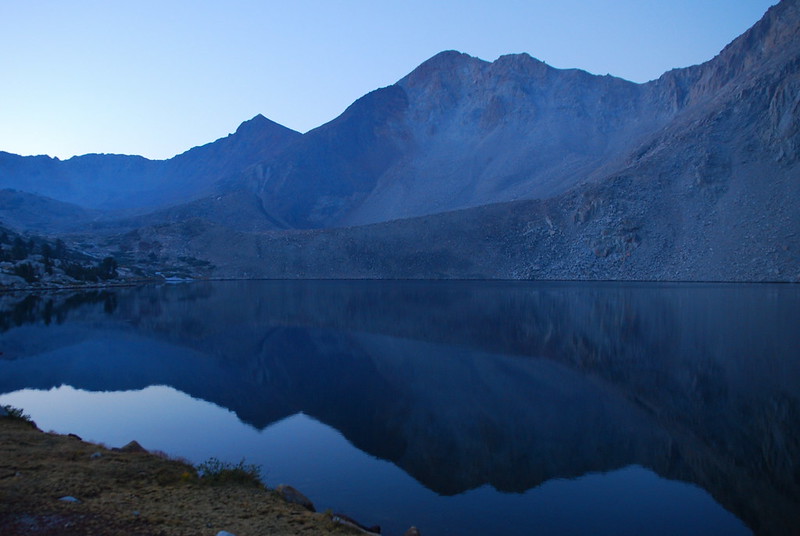 I start down wearing everything I have – long underwear, rain pants, puffy jacket, rain jacket – and I’m still a little cold. All the foliage is frozen and there’s ice on the corners of the lakes.

We descend a few miles among frosty seasonal streams until we enter the thin band of forest that surrounds the South Fork Kings River. The sun’s just rising as we leave our plateau, and I stop every few minutes and take off my gloves just long enough to take a picture. 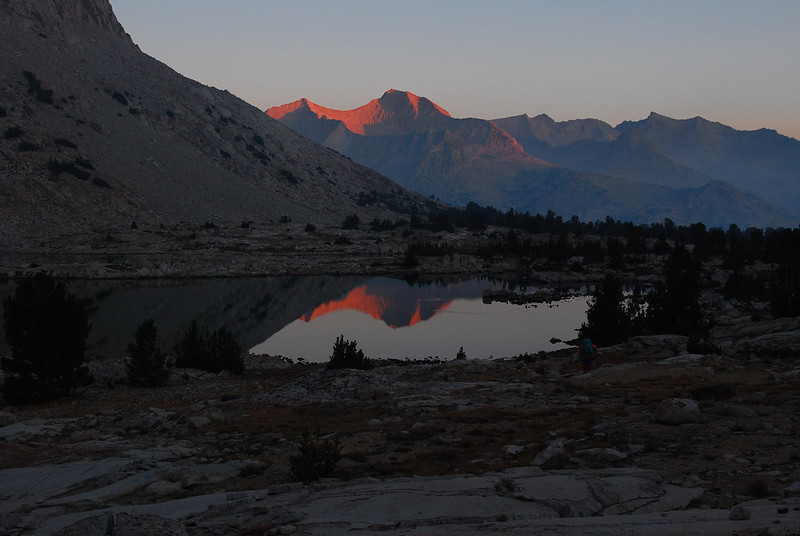 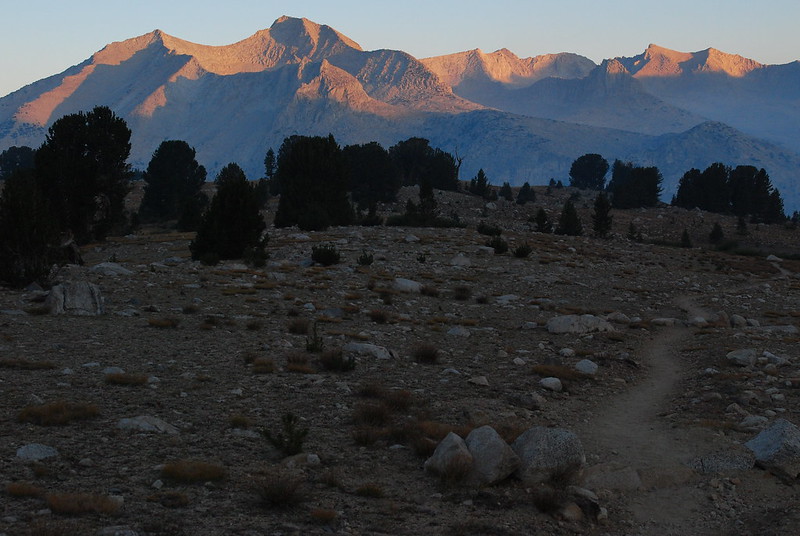 We switch back steeply through the woods until we reach a braided crossing of the South Fork. In normal years its a tough crossing – people wade, people get swept way – but we just rock hop across.

There are a few tents, folks just up for breakfast. We stop for Snickers and talk to an older guy getting water, who’s planning to exit over Taboose Pass, just a couple miles up the way we came. He’d planned to go longer, but he’s worried about the smoke.

After the crossing, we start a long, gentle ascent toward Upper Basin and Mather Pass. The sun’s out now and I take off everything but my shorts and shirt. 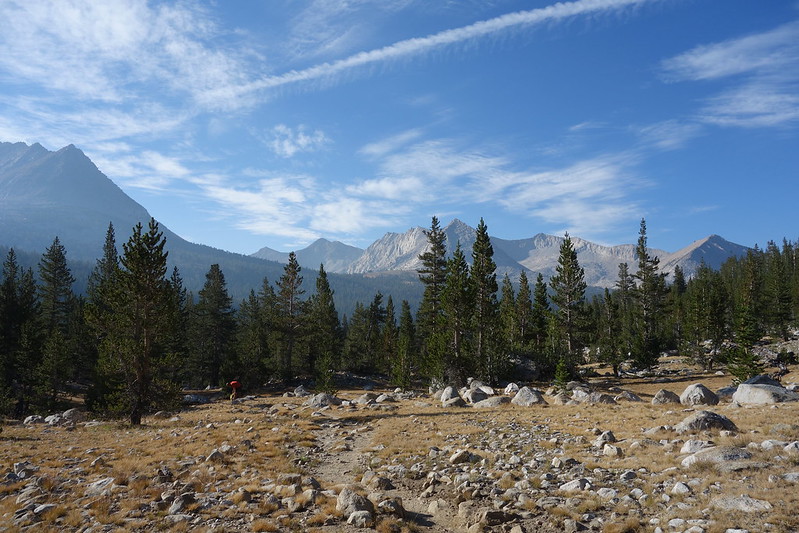 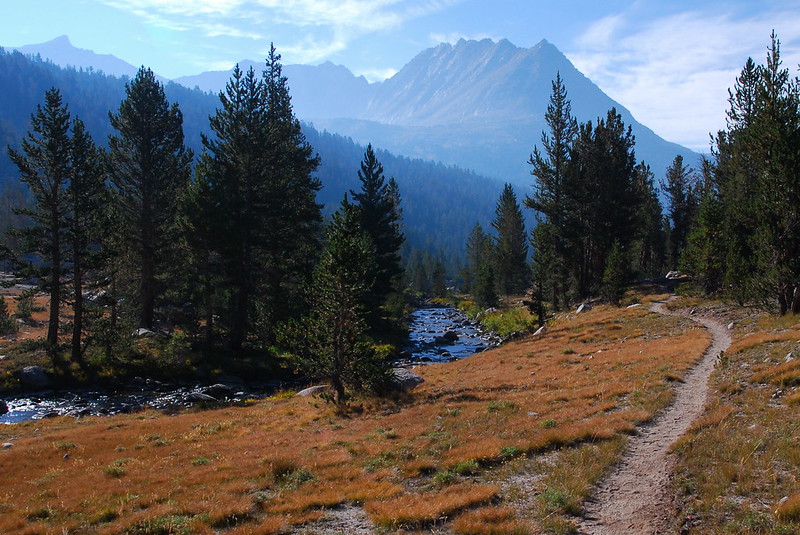 Hiking feels really good today. And fast: three miles an hour uphill. Long distance hikers sometimes talk about the “moving sidewalk”: that point when you’ve got your trail legs, and suddenly everything’s just easy. It’s easy like that for me today. I put on some early 90s rap and almost run up the trail. God this place is beautiful.

I’m sitting on a small slab of granite putting sunscreen on my arms when a group of four passes – three older men and a younger girl. Huge packs with gallon jugs tied to to the back. I say hello the way I do – jubilantly, because look where the fuck were are – and they all glare but for the girl, who seems sort of long-suffering. She smiles slightly, almost furtively, and gives me a tiny nod. I think the gruffest one’s wearing a cross.

Thirty feet after they pass, they lose the trail in a small rocky section, and have to backtrack a few feet to find where they went wrong. The gruffest one snarls at the girl, who just looks down.

I sit for a few minutes to let them get some distance, but when I get up they’re still right ahead of me. I pass, apologizing for the interruption, and, again, no one says a thing. Huh.

Safely past our sour friends, we stop for breakfast at a small off-trail stream in the Upper Basin, both feeling really good. We’re doing it!

I stretch my legs as I eat, more out of habit than need, looking up at the granite walls rising all around us. It feels natural to be stopped here, drinking coffee. Like somehow this is how we were always supposed to spend this morning. 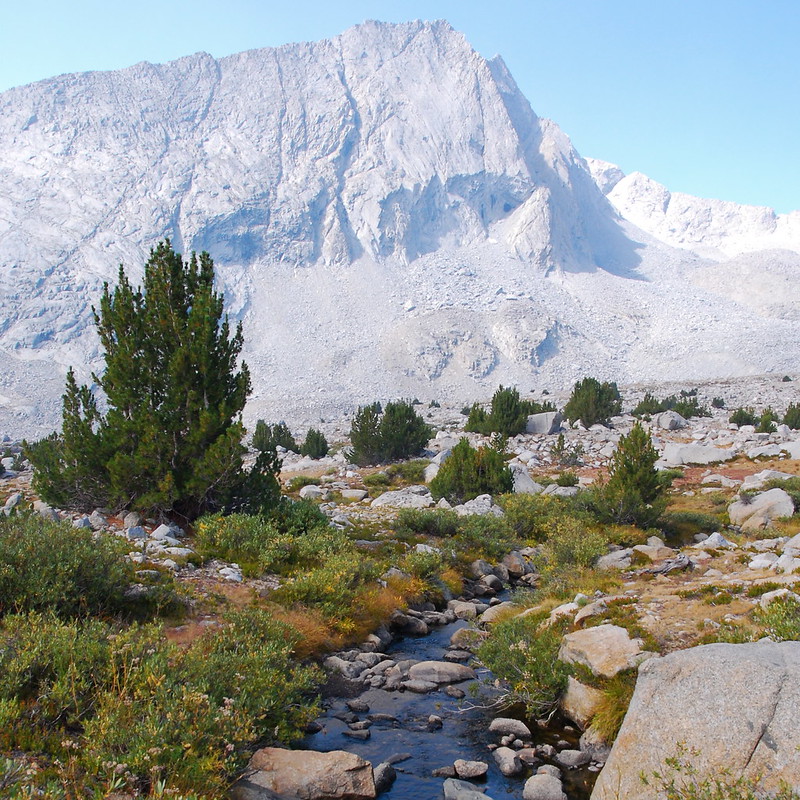 The Upper Basin is a large, flat area just south of Mather Pass, littered with little pothole lakes. It’s easy, fun walking – one of those mornings where everything just seems right. 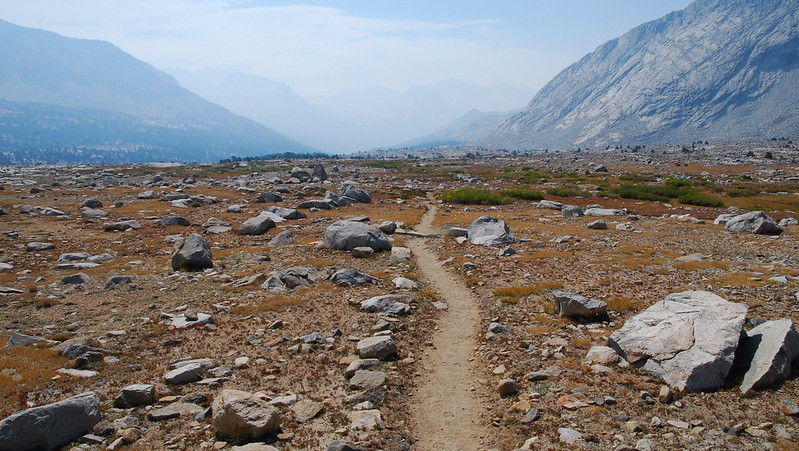 As I walk, I put on more rap, and dance up the trail. Krista, thankfully, fails to get a picture. 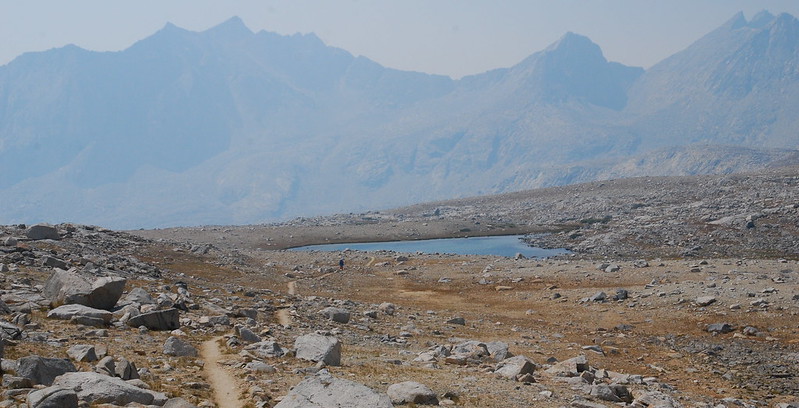 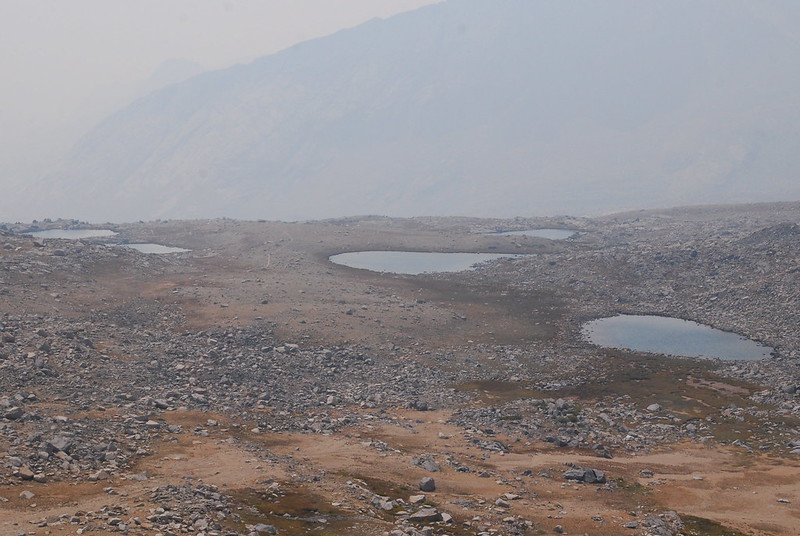 As usual, Mather Pass looks daunting from far away, but is actually extremely well-built. It is, again, just damn pleasant walking. The trail snakes up through piles of jagged rock, unseen switchbacks cutting an inexplicably easy path through the rubble. 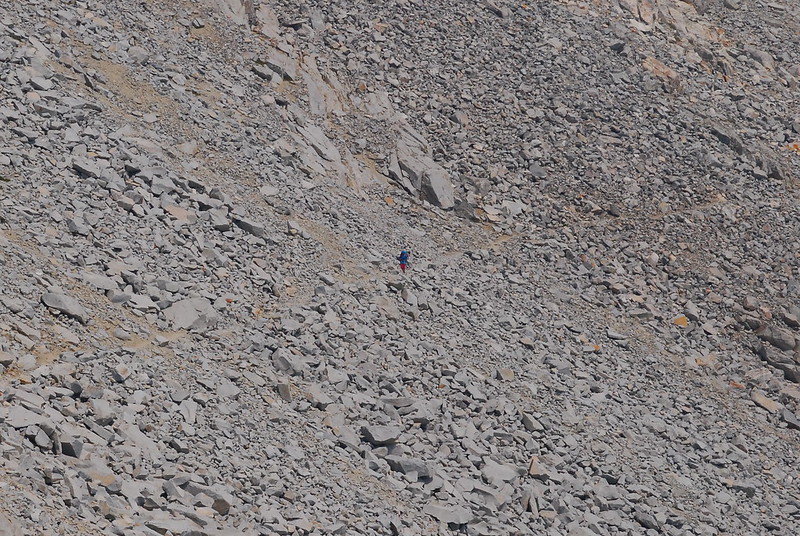 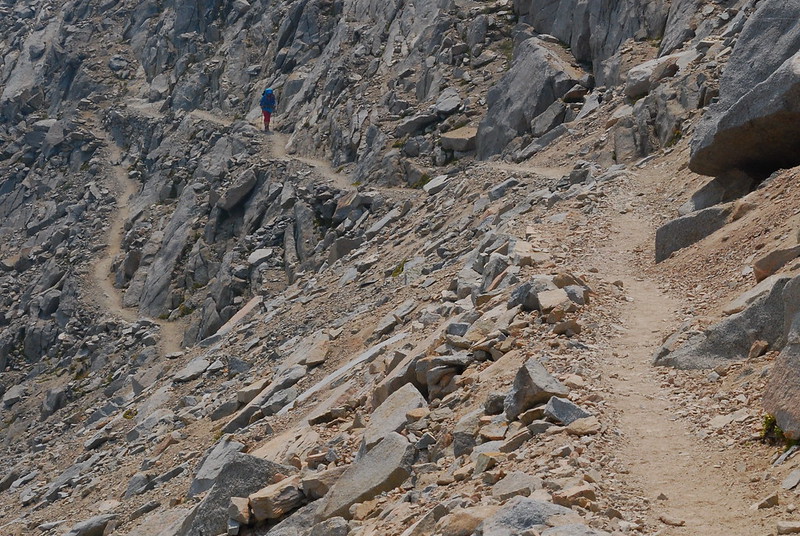 I’m not sure that what I do up top is properly considered “marmotting,” but, whatever it is, it’s very, very nice. I shove a handful of trailmix into my mouth, survey the gathering smoke. We beat it up here. 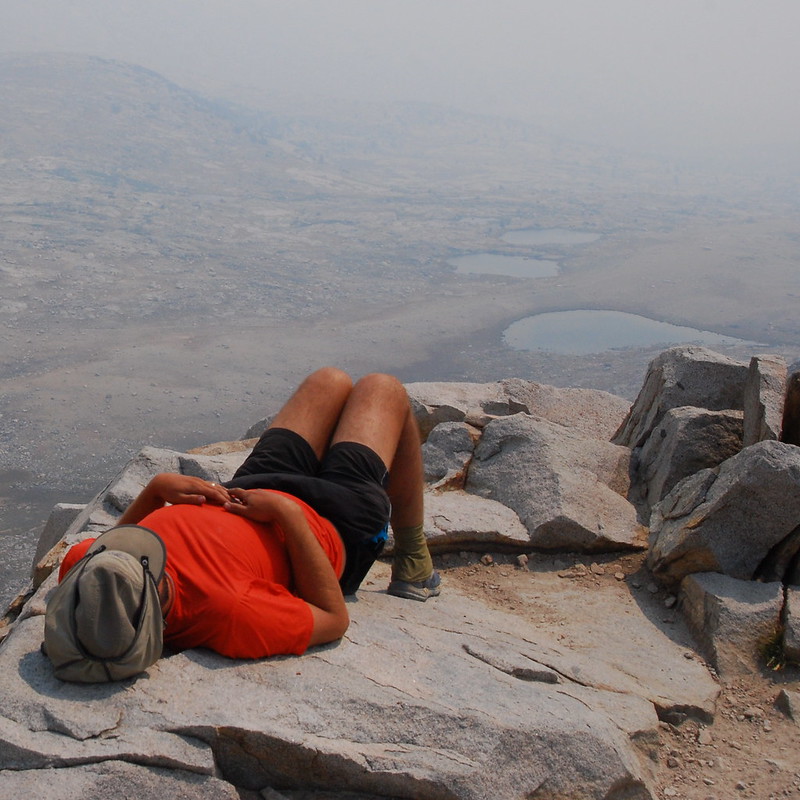 Heading down the north side of the pass, we run into a massive pack train, made up of horses struggling up the uneven rock. One’s carrying a barbecue. I don’t know that I have a well-formed opinion on this sort of thing, but the animals definitely do not seem to be having fun. I think of something Douglas Adams said about horses: 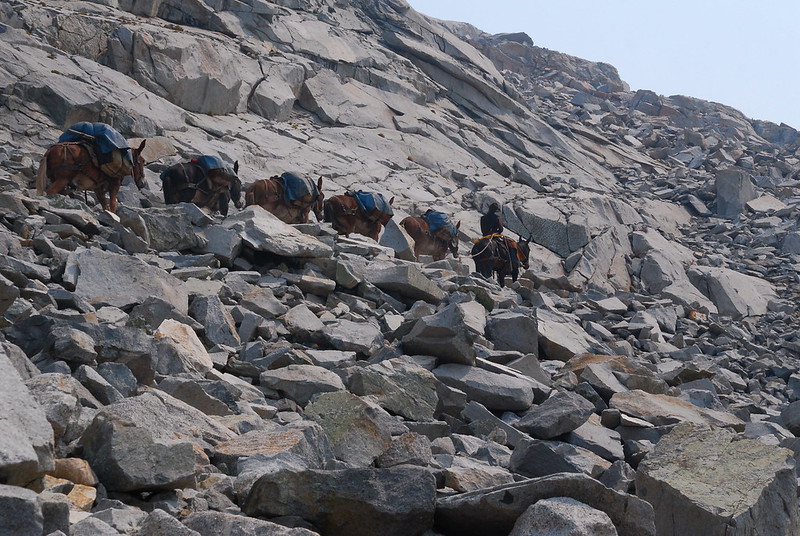 The north side of the pass is a jumble of broken rock, jutting out at every angle, on and off the trail. The trail, in parts, is more of an assumption than a reality – a faint path of footprints rambling from rock to rock, there only insofar as you know it’s there.

We eat lunch at a small creek that trickles down from a spring just below the pass. The ground’s all covered in holly, so we stand, looking down at the Palisade Lakes. We’re just about to enter Le Conte Canyon, supposedly the smokiest section of the trail, but the smoke’s descending here, away from us. The lakes just get clearer and clearer.

We pack up and continue onto the lakes, crossing a half dozen creeks cascading down from the inappropriately named Disappointment Peak. 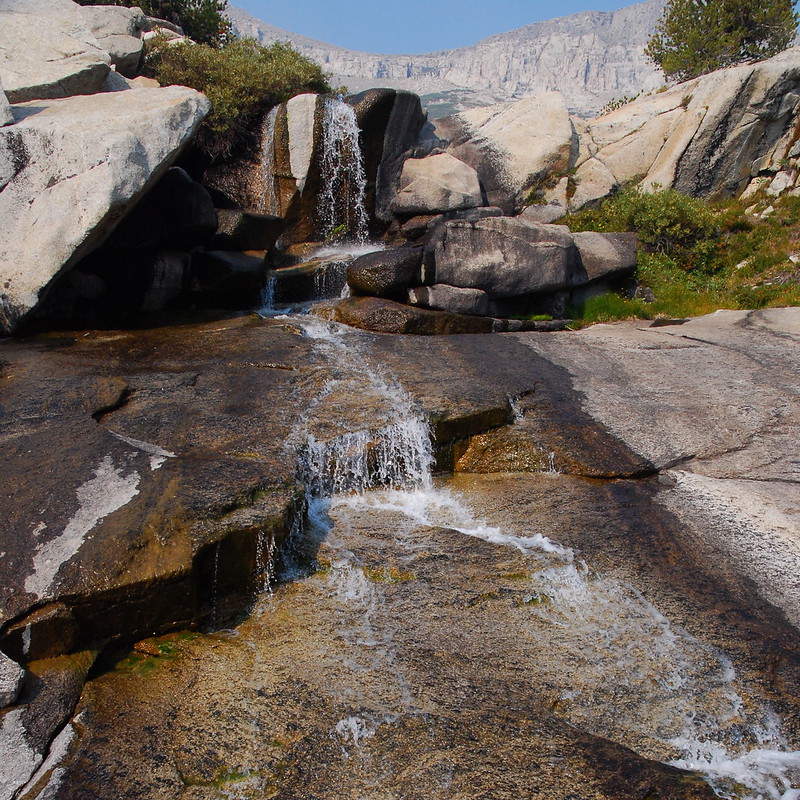 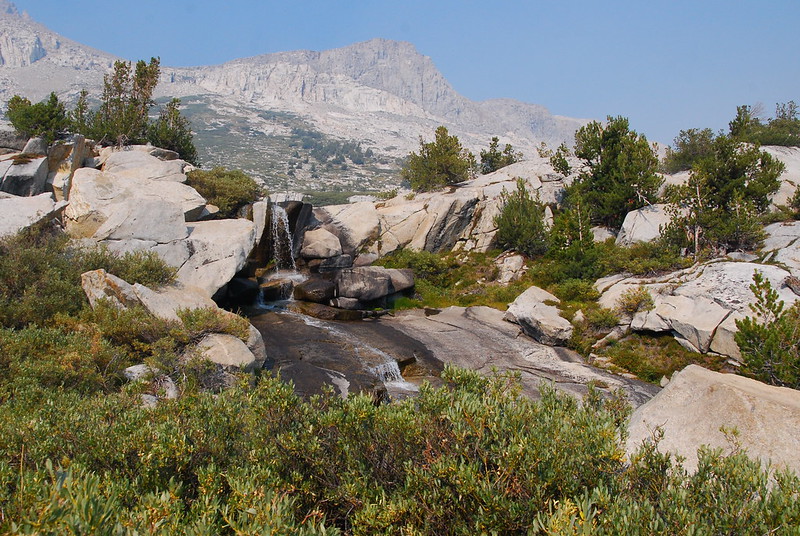 The trail traverses the north side of the Palisade Lakes, passing over massive granite slabs on its way toward the Golden Staircase. It’s beautiful. 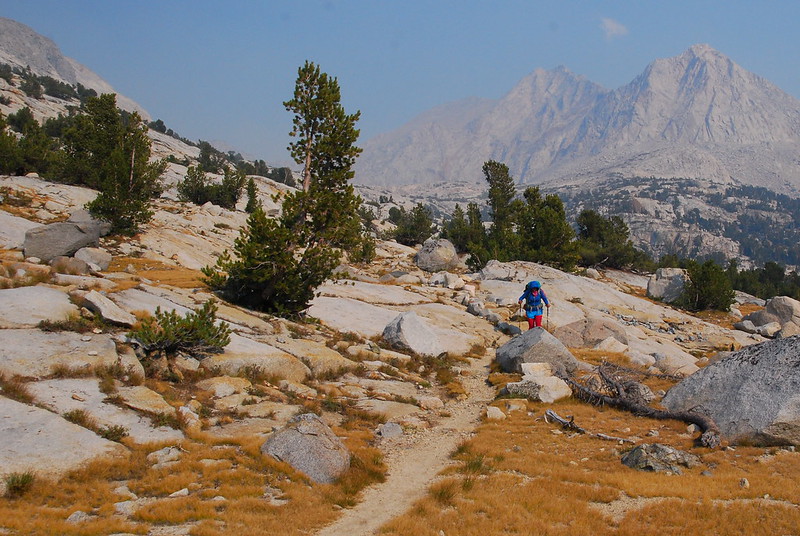 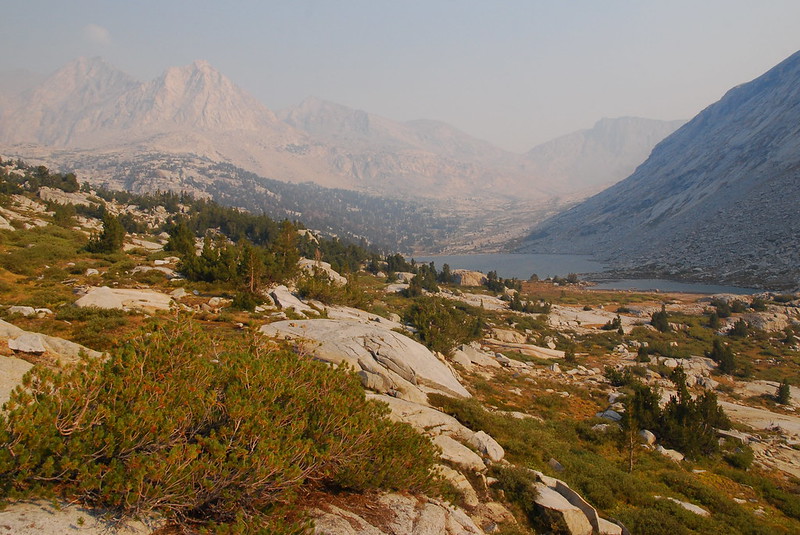 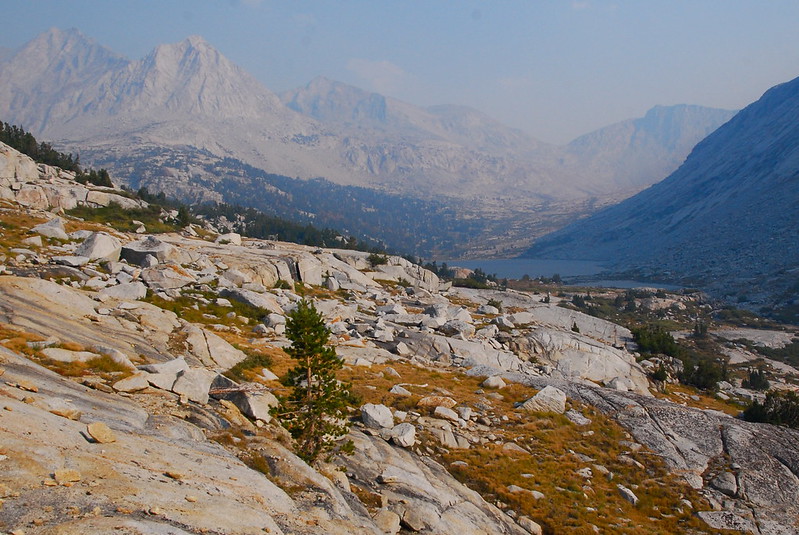 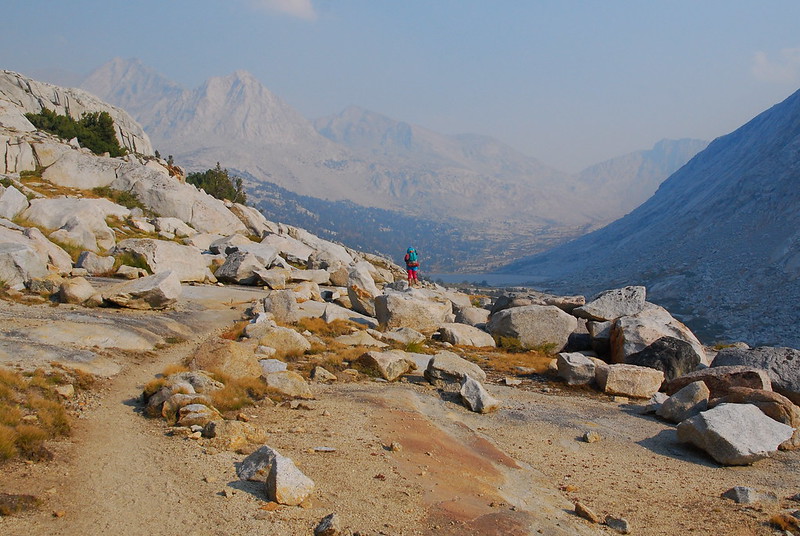 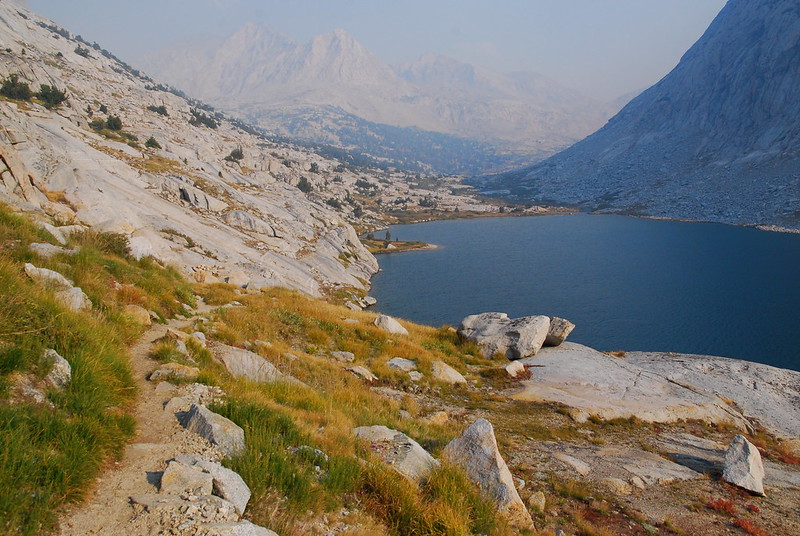 Camping at the Palisade Lakes is a little hard to come by – most of the camping is concentrated on the far eastern side of Lower Palisade Lake – so we put down our packs and look around a little. Our gruff friends from earlier are camped in a meadow just off the trail, glaring at passersby. The girl’s sitting a little ways away, alone on a short slab of granite next to the tents.

We find a spot way out of the way, a few hundred feet off the trail down a small ravine, near where Palisade Creek emerges from the lakes. We take some water from our private creek to do a little laundry, lay our wet clothes on the warm rocks to dry. Lay on the rocks ourselves, looking into the blue sky, eating gummy bears that taste like peaches at the height of summer. 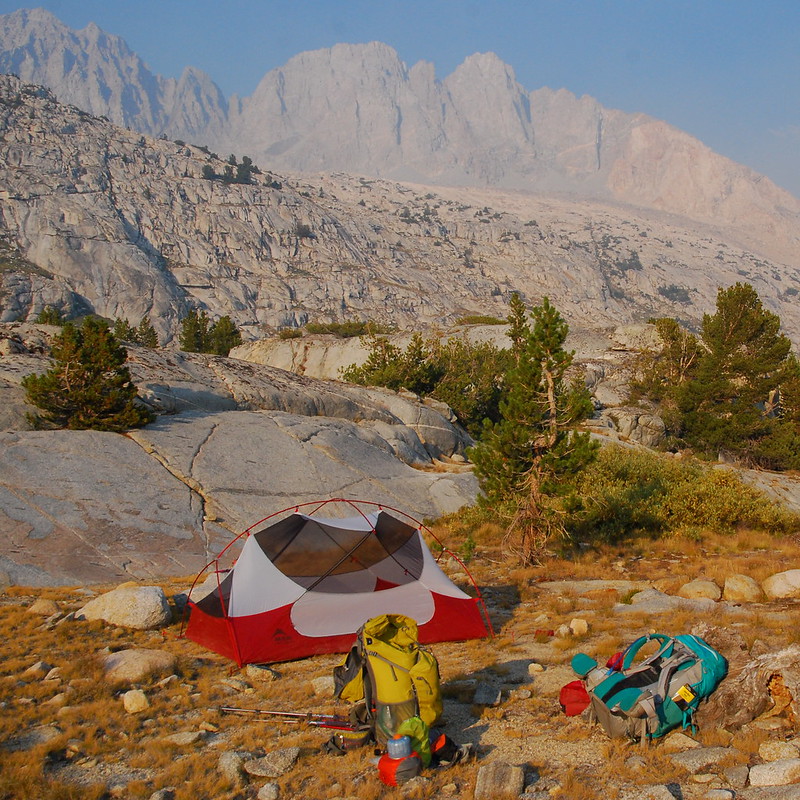 We’ve got a private balcony overlooking the creek’s cascading course into Le Conte Canyon, where we sit cooking dinner as the sun sets. It’s cold before it’s dark, and we make tea, getting ready for the long day ahead tomorrow. 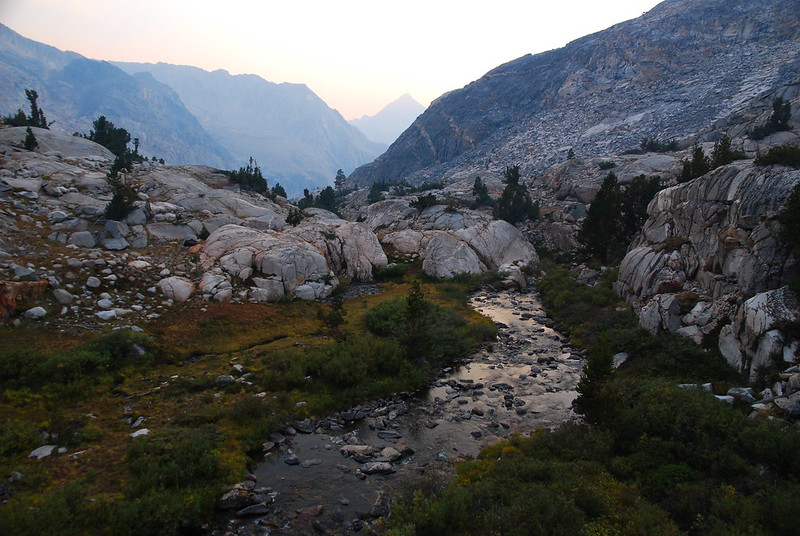 There are rows and rows of jagged peaks above us – the Palisade Crest. As the sun sets, they turn bright red.

Then the stars come out – hundreds of them. Krista’s in the tent, fighting the cold, but I sit out for a little while longer, watching a few meteors make their ways over Mather Pass. To have just one day like this…

But it’s the first of many.

One thought on “JMT, Day 10: Sunrise on the Moving Sidewalk”