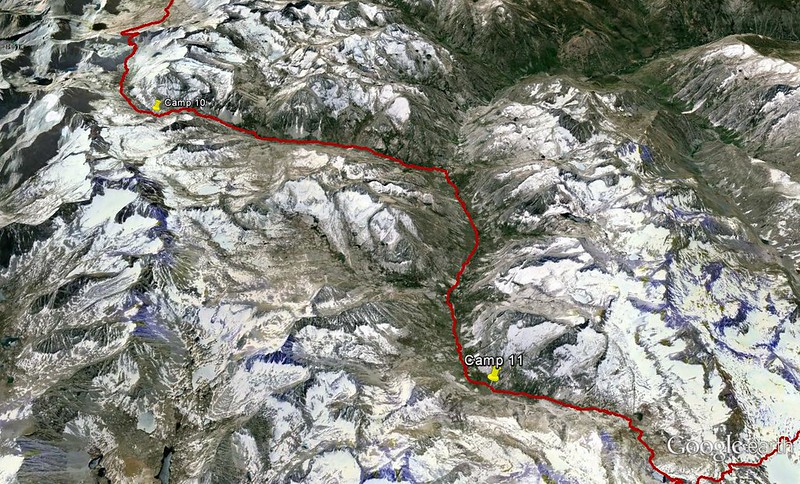 We wake up again a little after five, shake the sheets of ice from our tent, and start down toward the Golden Staircase, into Le Conte Canyon. 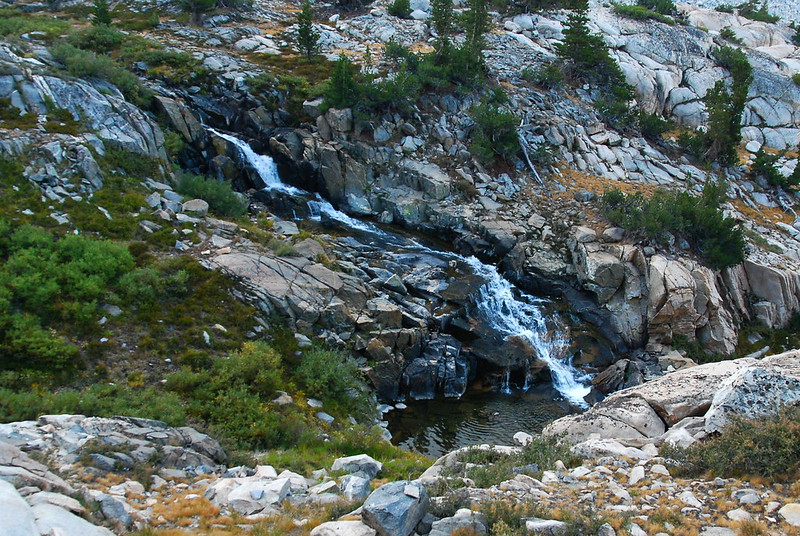 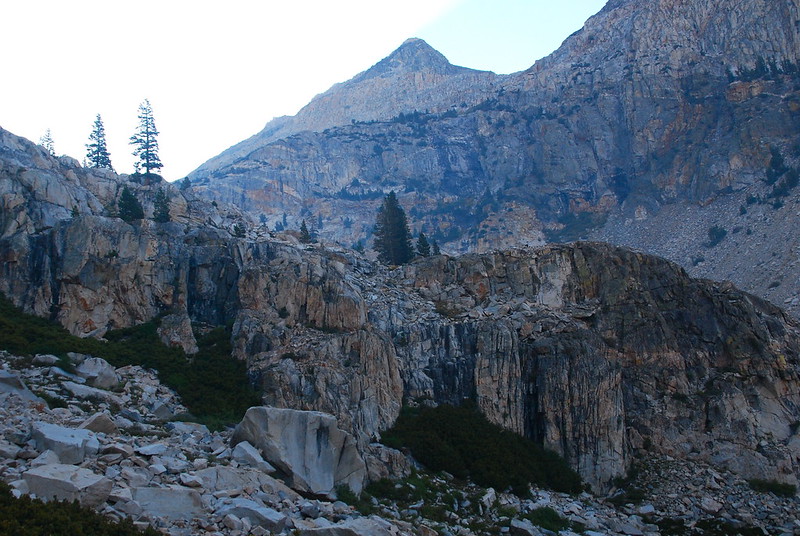 I’m nervous this morning, and a little fidgety. Le Conte’s supposed to have the worst smoke of the trail – everyone we’ve asked about it has just sort of sighed and looked down instead of answering – and we’re going to spend basically the whole day traversing it. Huh. 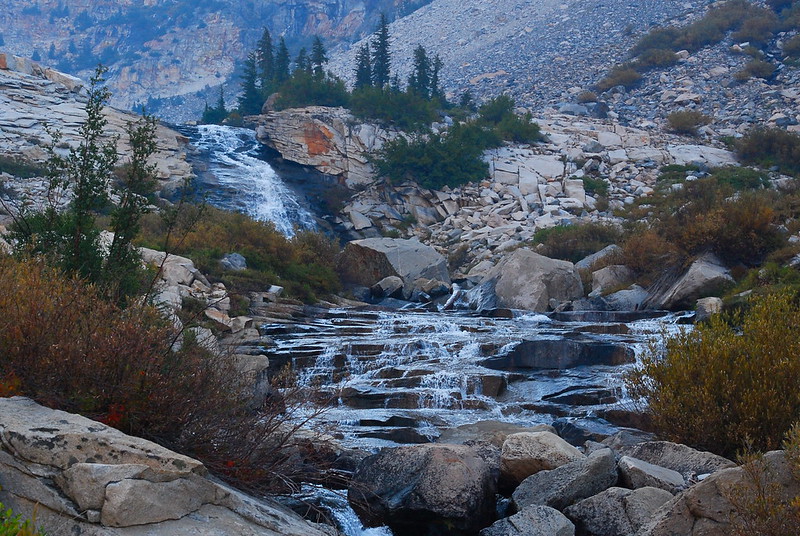 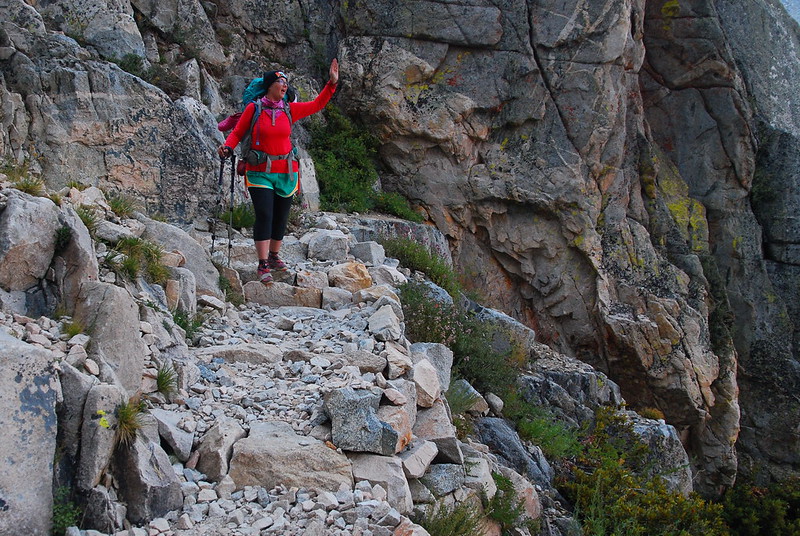 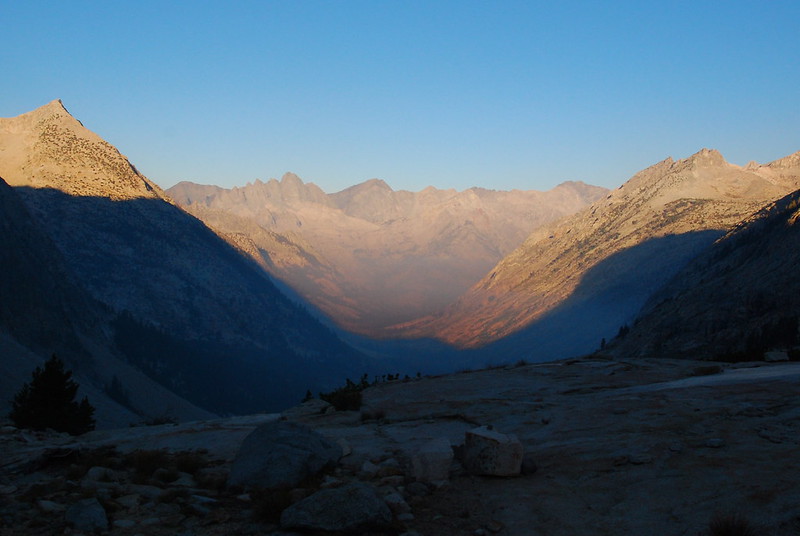 The Golden Staircase is exactly what it sounds like: a couple miles of stairs built out of and into the rock, descending a couple thousand feet into Le Conte Canyon. I’m glad we’re going down.

I’m half turned around saying something to Krista to this effect and we run – almost literally – into a large, friendly group of South Koreans dressed in super bright colors. Kids, adults, grandparents, everyone. They’re fantastic, and I suddenly feel kinda schlubby.

An older woman in the group, dressed in bright red and purple and seemingly unable to speak much English, apparently feels an instant affinity with Krista’s Rainbow Brite Ensemble, and motions, smiling widely, for me to take a picture of the two of them with her camera. She hands me a huge camera – which, I feel compelled to add here, matches the purple of her pants – and I do. I take three, actually, without really meaning to. The back of the thing is just a big LCD and I don’t really know what button to press. I think I hit the right one, though, because a big smiley face shows up in the upper right corner of the screen. I think – or, really: hope – that the smiley face is an aftermarket software upgrade that she did herself.

I’m still tired and sort of fumbly and I neglect to take a picture of them with mine, so we won’t have anything to show for it. But it makes my mornings all the same. I walk away smiling.

After the Golden Staircase, the trail passes through Deer Meadow, which is, appropriately, completely filled with deer. Like; it’s filled with deer in the same way as a glass of water is filled with water. They’re everywhere. We stop to change out of our warm clothes, and I ramble off into the trees to dig a cat hole. There’s a deer there, of course. Just watching. That “just” fees too minor: the deer’s intently watching

Then we follow Palisade Creek west for a few miles toward the Middle For Kings River. There’s not a lot to see, but the walking’s easy. I put on William Orbit and zone out. 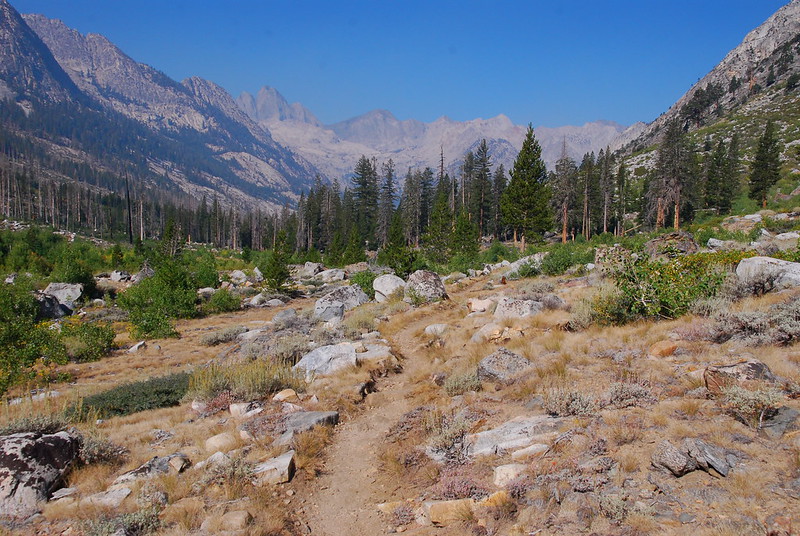 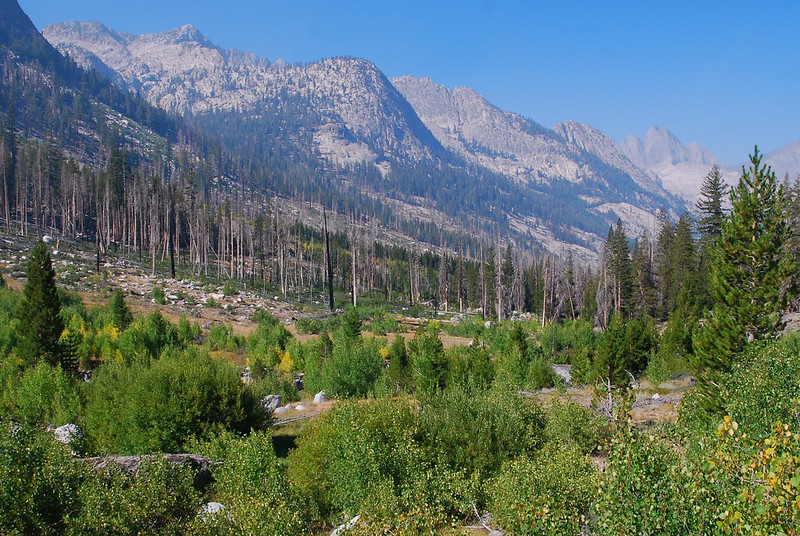 We’ve been following Palisade Creek all morning, but the the actual water’s always been just out of reach, down steep ravines or through tangled blowdown. Eventually, though, the trail enters a broad wooded flat and curves toward the creek, where we stop for breakfast on a small beach, spread out in the sand.

I eat standing up, still fidgetty, but now somehow in a good way. We’ve been going really fast today, and my legs feel great. My pack’s lighter, too – only four days of food?

We finish up and speed on, a few more miles to the bottom of the canyon. It’s just before eleven but the smoke’s already rolling in.

I beat Krista to the bottom, where Palisade Creek magically becomes the Middle Fork Kings River. There’s a beautiful waterfall just off trail, and what looks like the remains of an old bridge. I guess a road once went here? 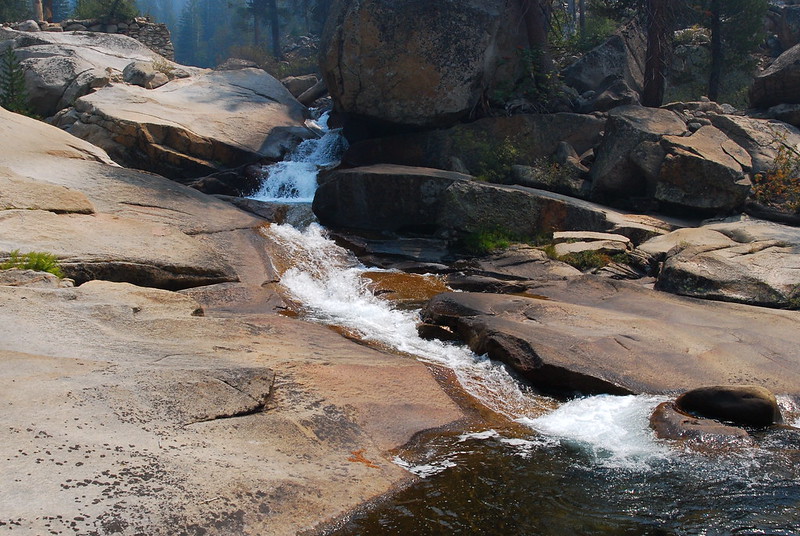 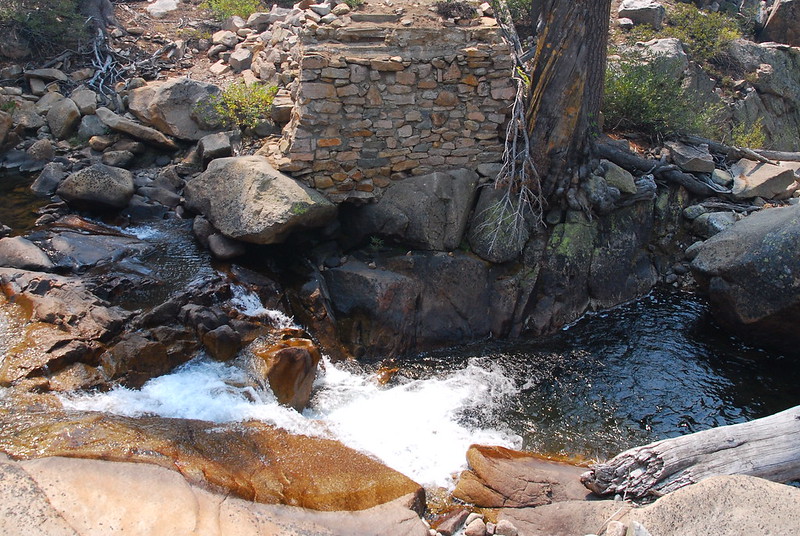 As I’m waiting, half a dozen people pass, heading up the way we came. They’re all nervous about smoke. “This is the worst it’s going to get, right?”

Le Conte Canyon’s supposed to be the northern edge of where the smoke’s really bad, which means that people hiking the trail north to south – the traditional way – are seeing it for the first time today. The thing is, the smoke here’s not bad at all. If the smoke’s still like it was down south, they’re headed for much, much worse.

I debate with myself for a while about whether to tell them, and settle for something like “It’s been great!” That answer avoids the question, of course, but I don’t think people are really asking about the smoke. They’re asking if it’s going to be okay. That’s what we were asking when, a few days ago – god, it feels like weeks – we asked people. They want to know if it’s doable, and it is. It’s wonderful.

We begin ascending out of the canyon right around noon, into more waterfalls and meadows. 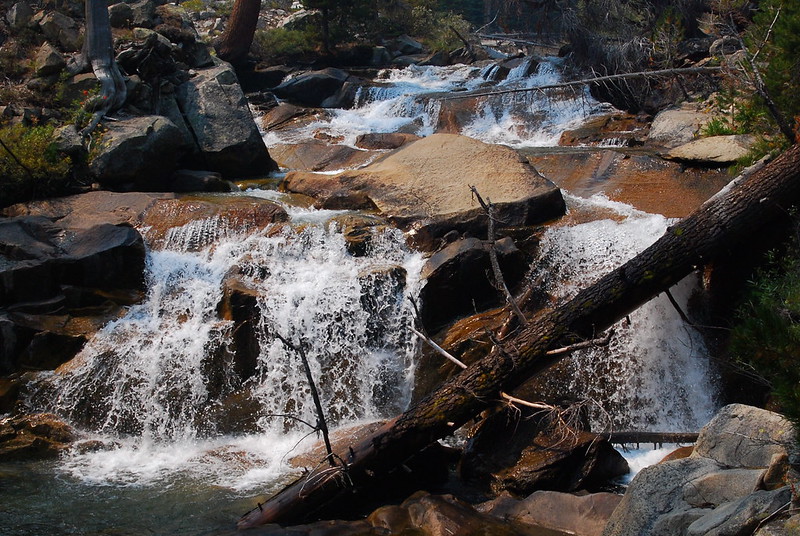 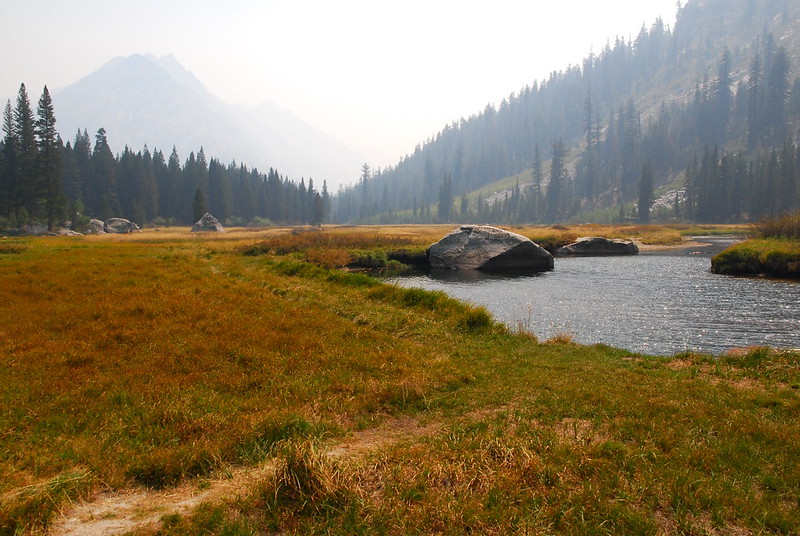 As we climb, the smoke clears. Blue! We’re following a fast, flat creek, which runs quickly over smooth granite. I try dozens of times to get a picture of it, but never do. 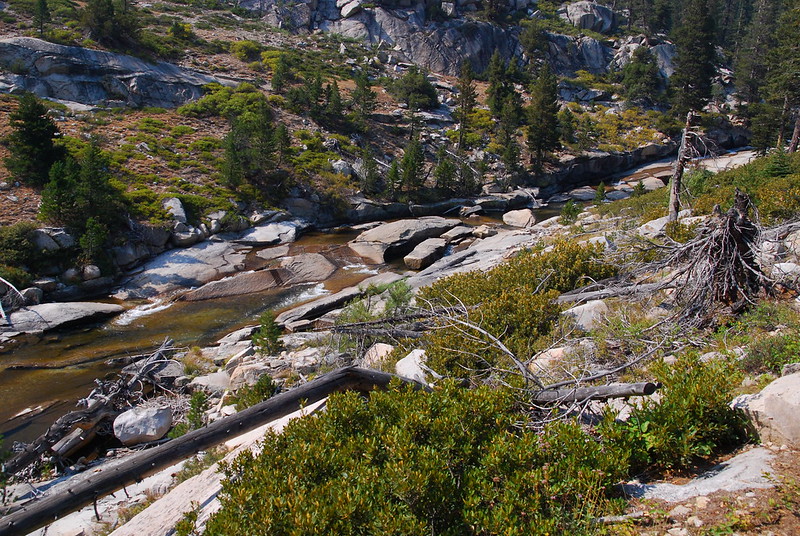 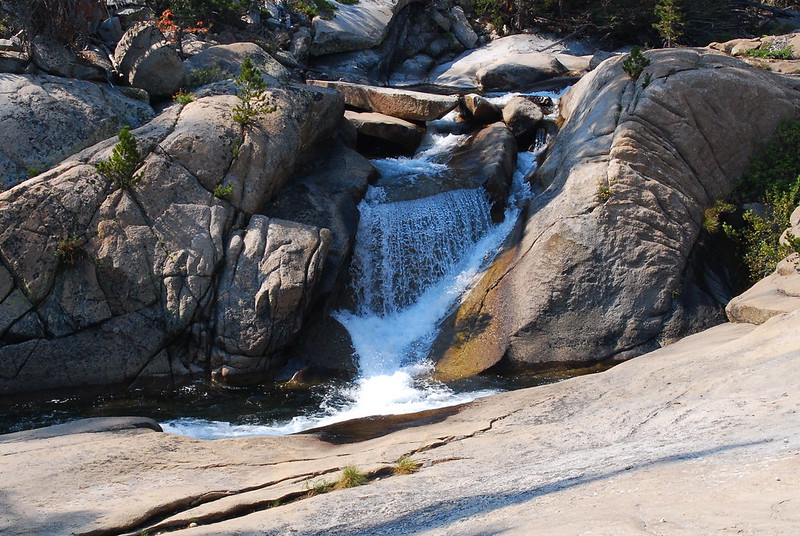 We stop for lunch a couple hours later, at a huge campsite just short of the Le Conte Ranger Station. Krista makes her Magic Beans with Magic Taco Seasoning, and we happily eat, watching water rush over the rocks.

We finish our tortillas but there are still some beans left, so we eat them with dried mango slices instead. Dried mango and freeze dried beans and, like, half a cup of taco seasoning. It’s amazing. We talk about opening a restaurant that serves nothing but hiking food. Instead of bread there’d be complimentary Snickers at the beginning of every meal. Everything would be cooked tableside, by pouring dirty boiling water into heat safe ziplock bags full of whatever bullshit you ordered. It’d all taste the same: too much salt, too little spice, kinda plastic-y. The only item on the beverage menu would be overproof bourbon. Straight. “Of course we don’t have any fucking ice. What do you think this is?” You’d be able to order water if you wanted, but it’d take ten minutes, and the waiters would come back to your table glaring, rubbing their sore arms. Sometimes our taps would run dry in late September. There’d be a weekly special – “Resupply Saturday” – where we’d serve nothing but melted trail mix and that one god damn protein bar you mistakenly thought you’d eat.

Around the Bishop Pass turnoff, the trail emerges into another gorgeous granite-lined canyon. Funny how the walking always gets easier in places like this. 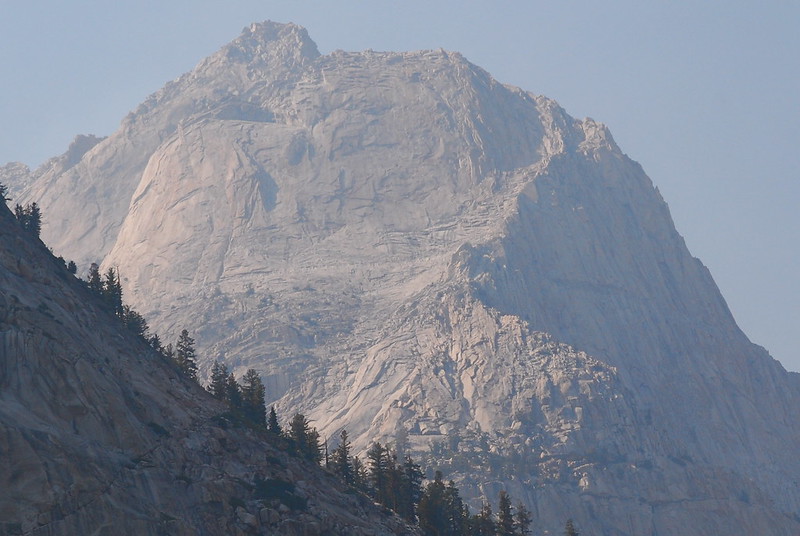 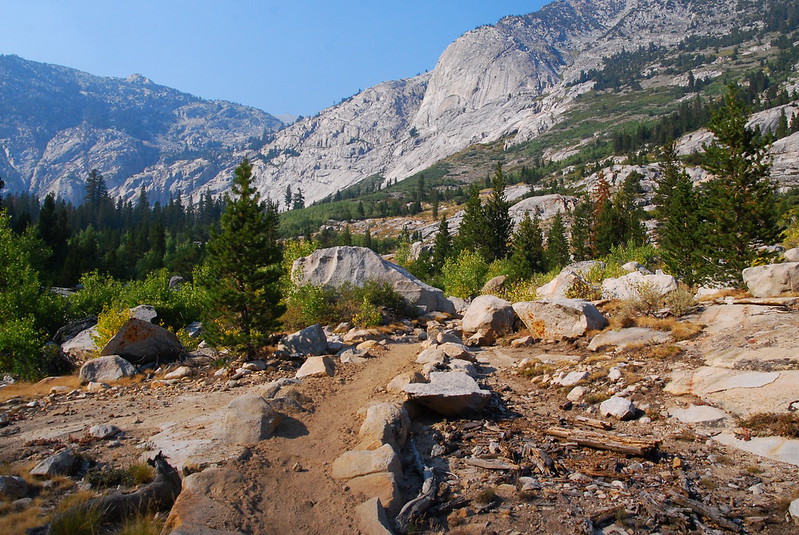 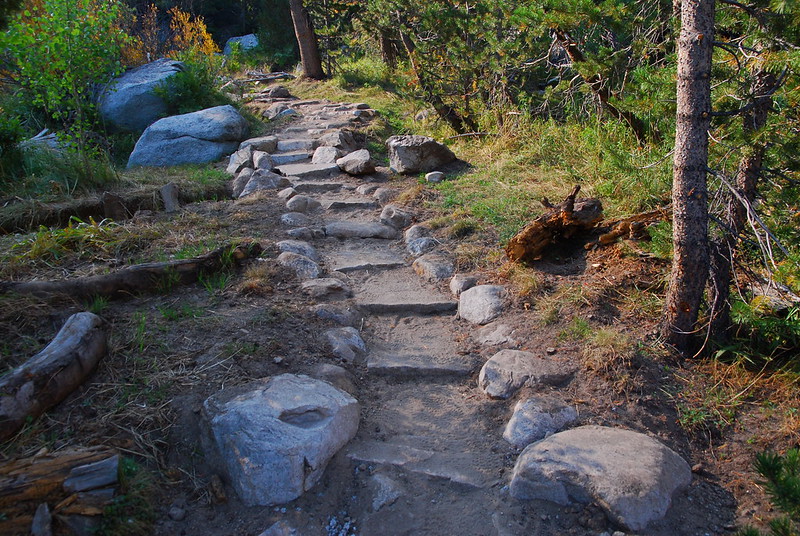 Our gruff friends from yesterday are camped at the (empty) Le Conte Ranger Station, heading out over Bishop Pass tomorrow. Just beyond their camp there’s this, uh, alarming note from the National Park Service. I guess bears eat mules? I guess our friends have some fun in store for tomorrow? 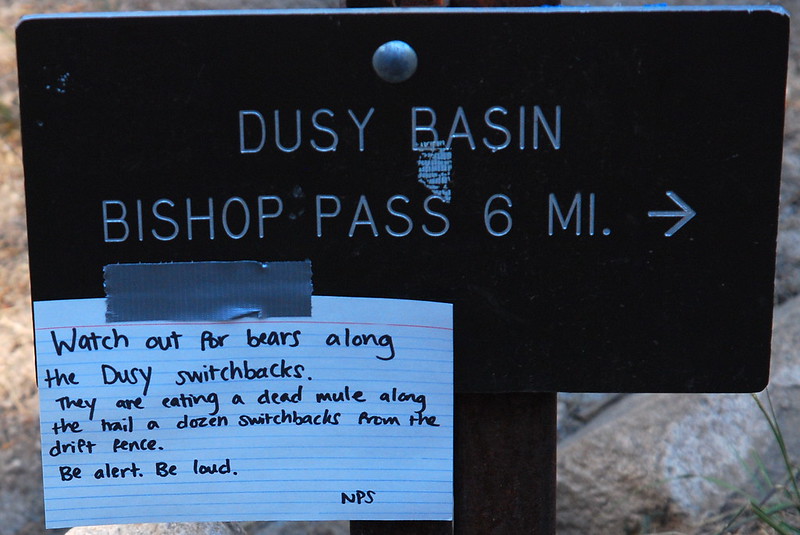 Camp tonight’s a small pullout off the trail just beyond Big Pete Meadow, near a bend in the river. It’s frigid, but I wash off my legs, change out in the open, do the usual camp chores, cook some freeze dried potatoes. It’s all starting to feel so natural. 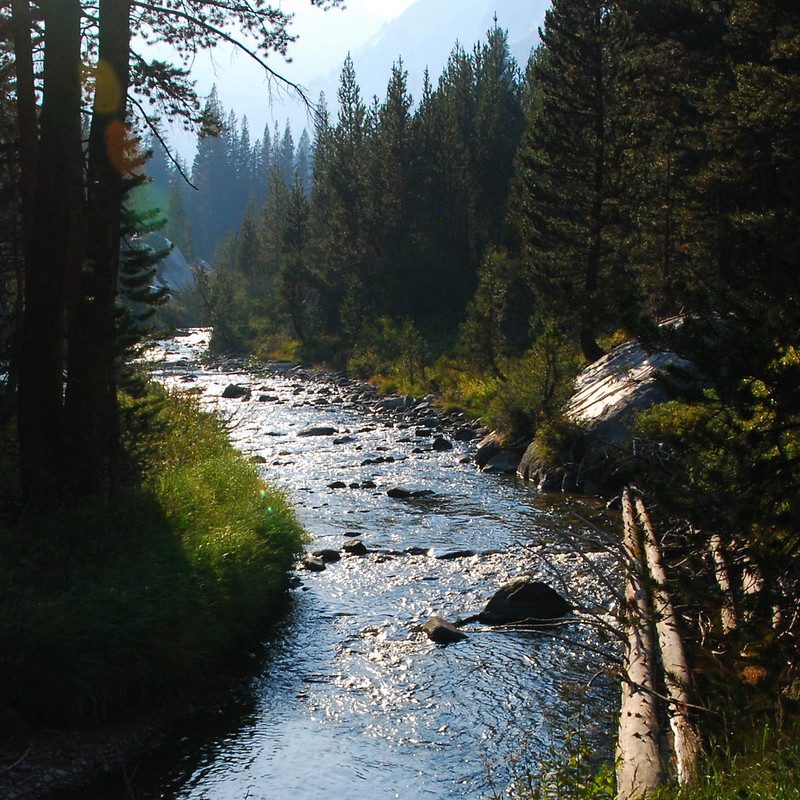 We end up having the most charming dinner guests imaginable. 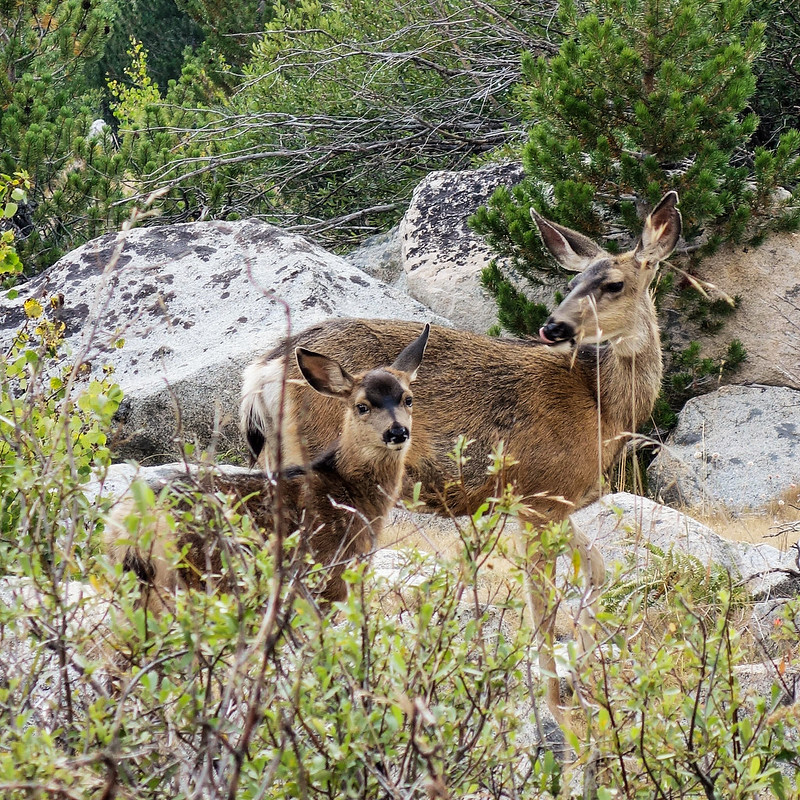 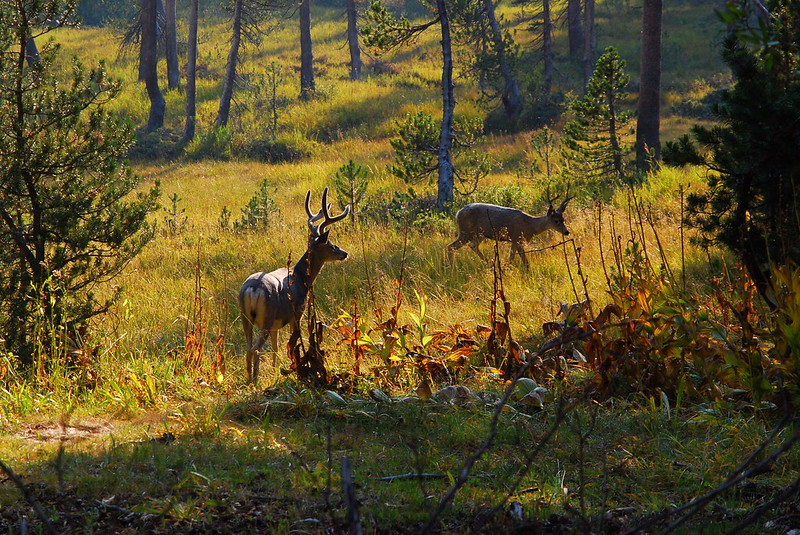