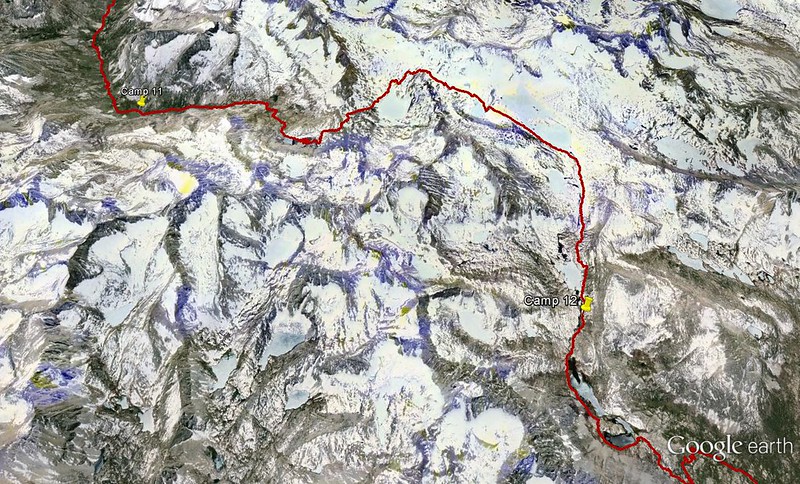 I’m feeling sort of bleary for the first few hours hours all the same, and walk right by this fine fellow without noticing. Luckily, Krista, as ever, is more on top of it. 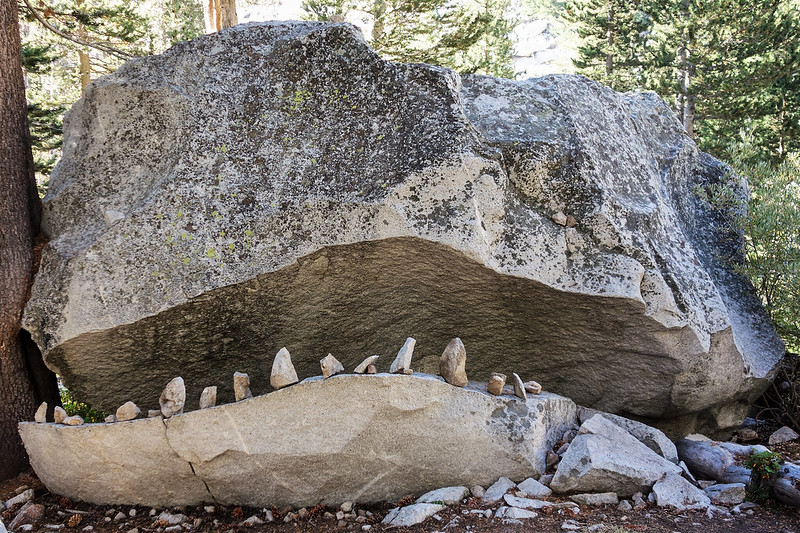 As the trail ascends toward Muir Pass, the woods fall away, first into meadows, then into beautiful, barren rockscapes. I look back into Le Conte Canyon and toward the Golden Staircase – it’s already obscured by smoke. Ahead, the sky’s blue.

And there are glaciers! Just below Black Giant’s silver peak. They’re tiny by our standards, but they’re glaciers all the same, and they somehow make me feel more at home. 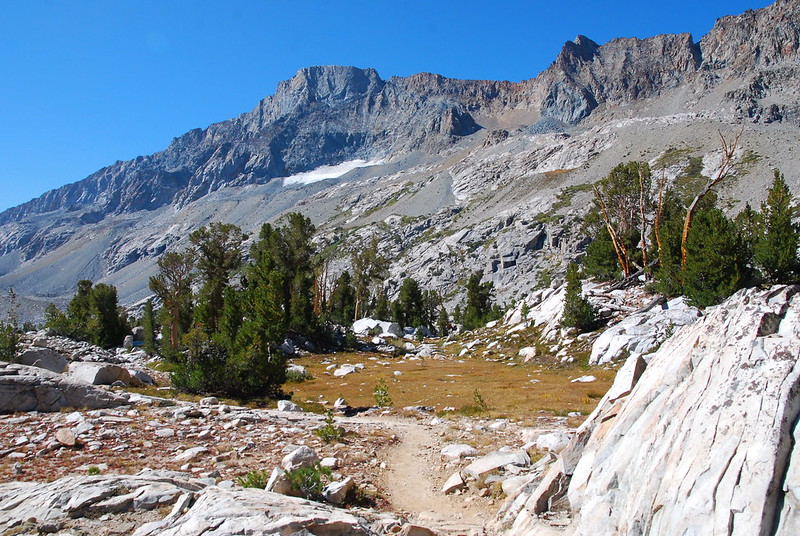 We stop for a break near Starr Camp, take off our packs, climb around on the polished granite. It feels wonderful not to be so pressed for time today – there’s nothing chasing us anymore.

I scramble up a small boulder to get a view back down at the camp, and there’s a lake there that was invisible from the trail. I wonder how many others like that we’ve passed – how many wonderful things were just out of sight. You could spend a life exploring up here.

A lot of people have. This camp’s named after Walter Starr Jr., an early 20th century explorer of the Sierra who wrote one of the first books on the JMT. He spent his life up here – scaling sheer cliffs in tennis shoes with no ropes. And he died up here. In 1933, when he was my age, he went up for a climbing trip to the Minarets, and never came down.

He was an interesting guy. A lot of the Sierra was still unknown when he was exploring it, and he did everything to leave his mark:

Starr was well known for his playful notes in summit registers and the length to which he would go to record his ascents. Twice, Starr had reached peaks only to discover he had no pen or pencil. Both times, he made a small cut in his ear, collected the blood droplets and scrawled his name and the date in the register.

Staring at my unseen lake, I think about something I read from David Brower, then executive directory of the Sierra Club, in the forward to a later edition of Starr’s book:

Thirty-three years ago, when the first Starr’s Guide appeared, the High Sierra was wild enough to protect itself. It no longer is… National Park superintendents and National Forest supervisors carefully helped prepare this edition, and all too often had to write in the margins phrases like… “meadow no longer exists,” “camping no longer permitted” …

For that matter, Vermilion Valley doesn’t exist any more; it is a reservoir. Primitive approach roads have been replaced by highways. The rush is on. Even the sky is no longer as clear as it used to be; the chance to see a distinct vista of the Coast Ranges from a Sierra peak is rarer, and the view of a sea of smog out to the west is commoner.

With another thirty-three years of change like this, no one is going to like what is left very much. Another beautiful wilderness will have had the wildness wrung out of it, the challenge in it obliterated by the ubiquitous desire to always make things easier.

But here’s the thing: that edition was published in 1967. It’s been 33 years. Actually, it’s been 48. And, somehow, this place is still here, still wild. Sure, the path we’re on is better beaten now, but it’s still one of the only paths in the wilderness.

For today, though, it’s back to the trail. And we make our way up, as the grass slowly cedes to rock. 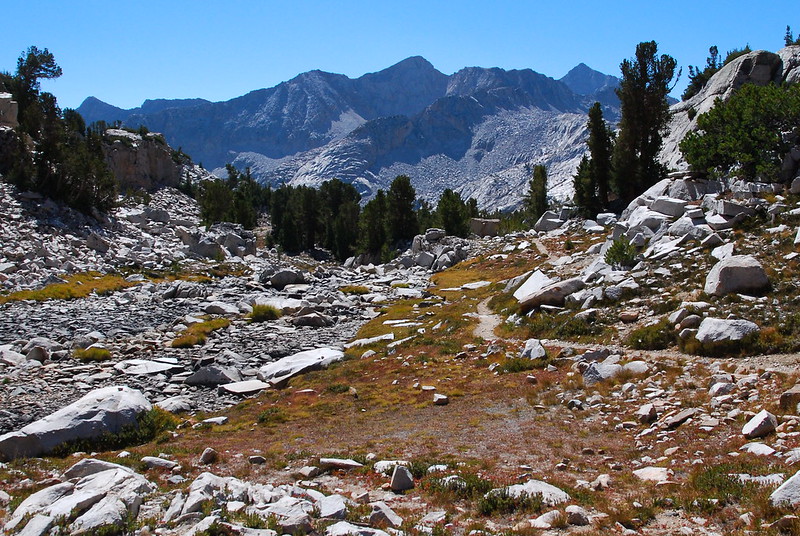 We breakfast at a large tarn under Helen Lake, which I initially mistake for Helen Lake itself. “False Helen Lake.”

Along the shore, there are frogs – thousands of them – at seemingly every stage of development. I boil some water as Krista sits on the shore, taking pictures. 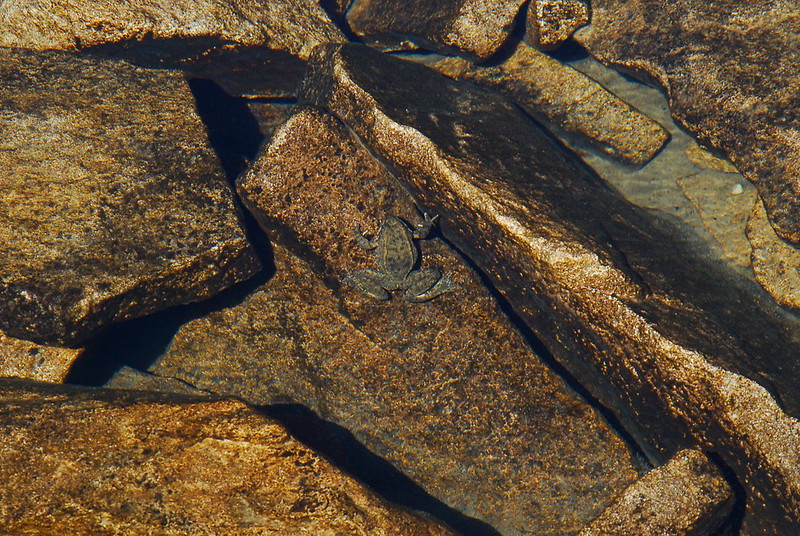 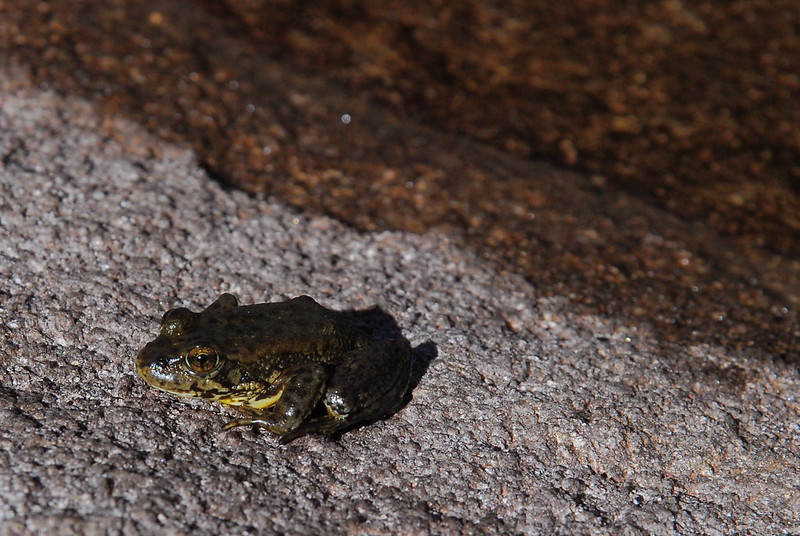 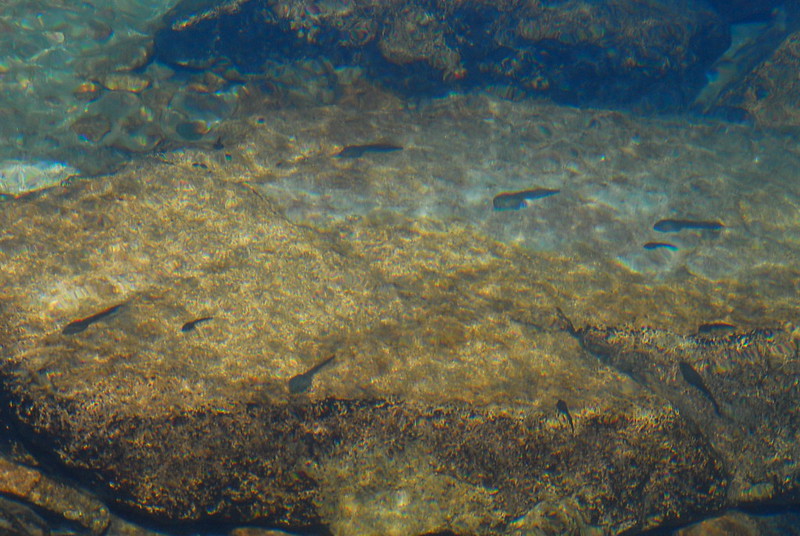 We eat a leisurely breakfast, then explore for a little. Krista wants to stay a while longer, watching the frogs, so I run ahead, excited to see the pass. 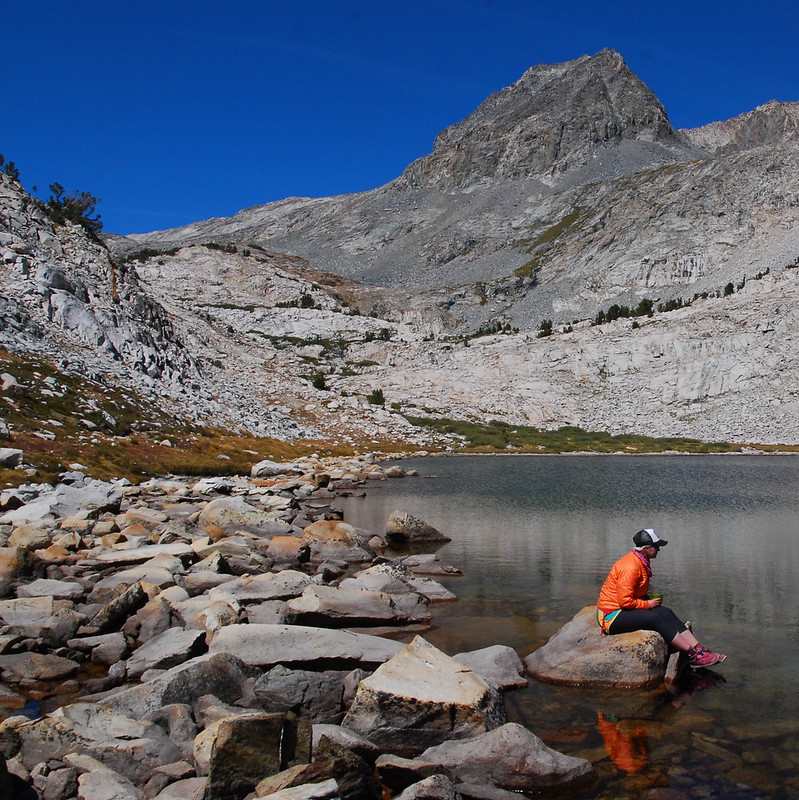 Looking back down at our breakfast lake:

And up at what’s to come: 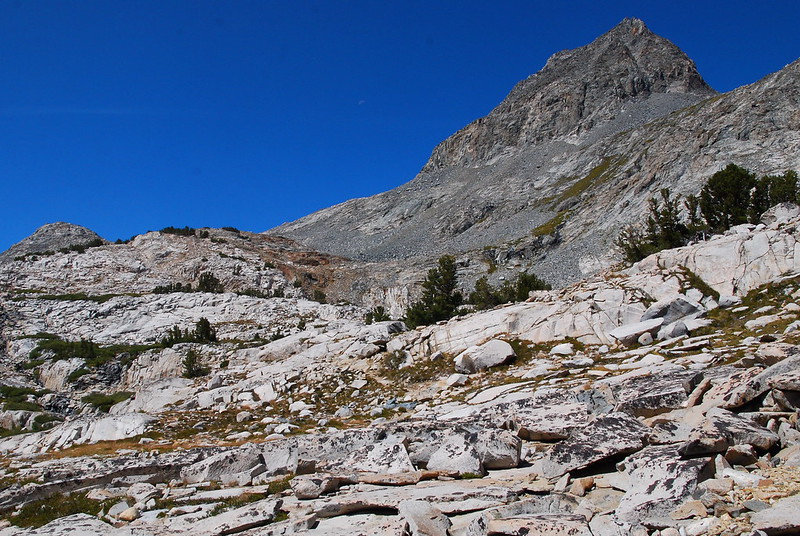 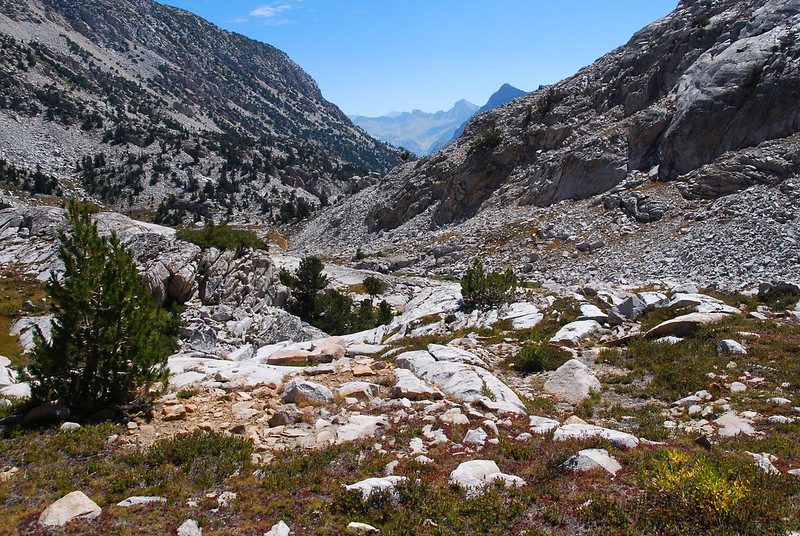 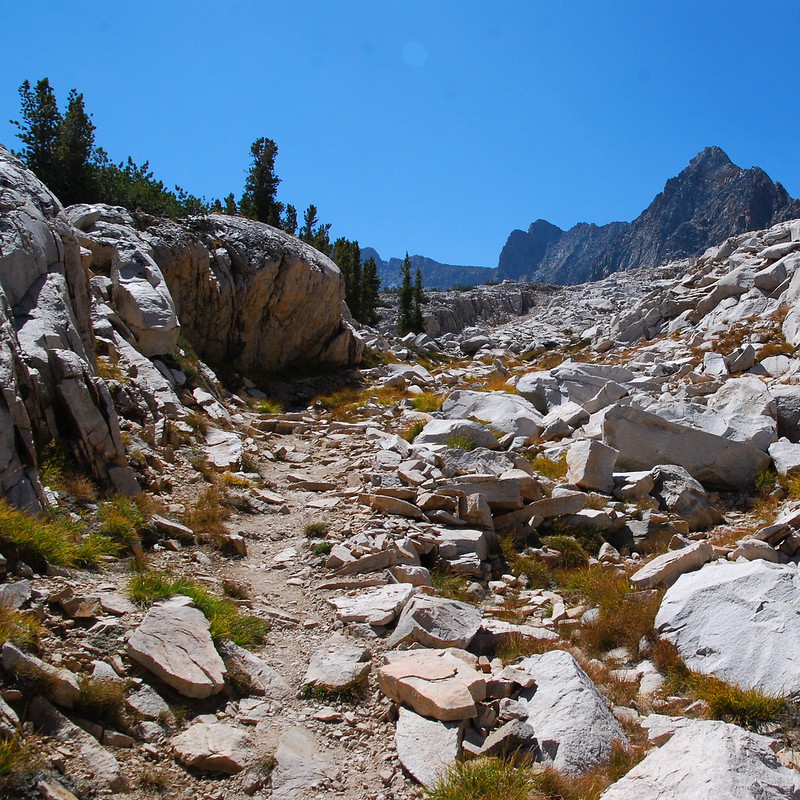 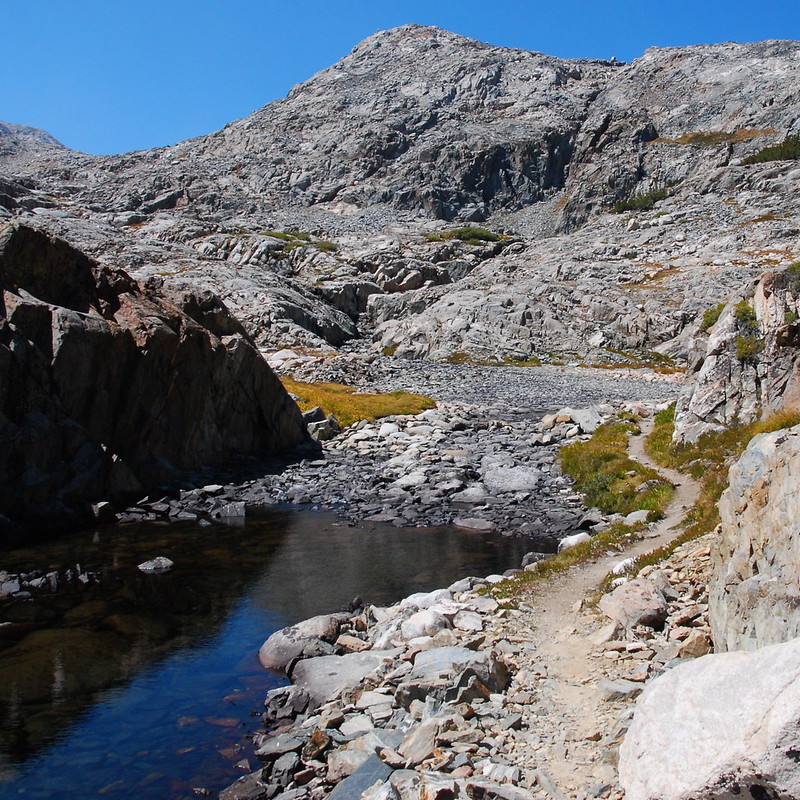 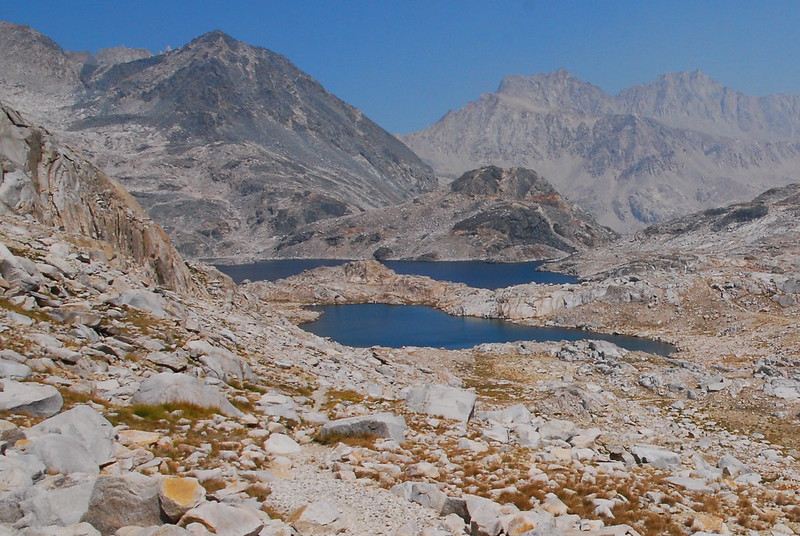 The terrain’s wide open, and the walking’s rocky but easy. I wander off trail among the lakes, up to a small tarn that turns out to be a sea.

When I arrive at the pass, there’s no one else there. I have the whole thing to myself for half an hour, wandering around taking pictures and exploring the hut. 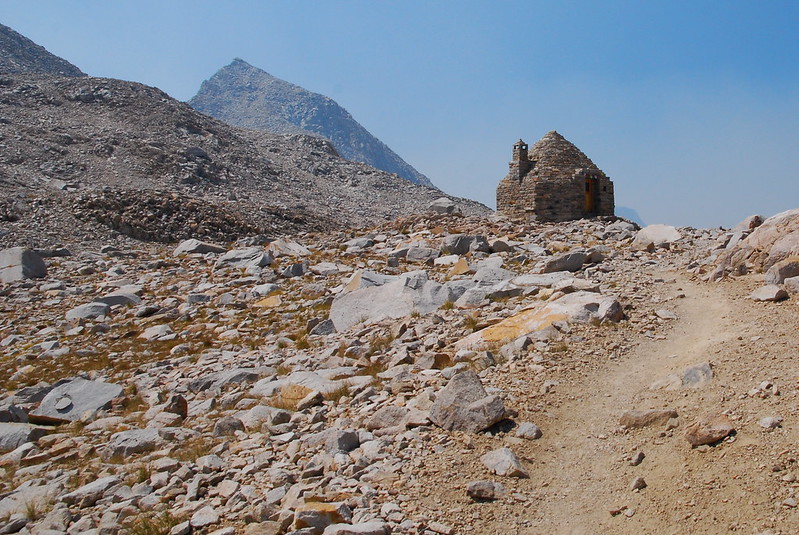 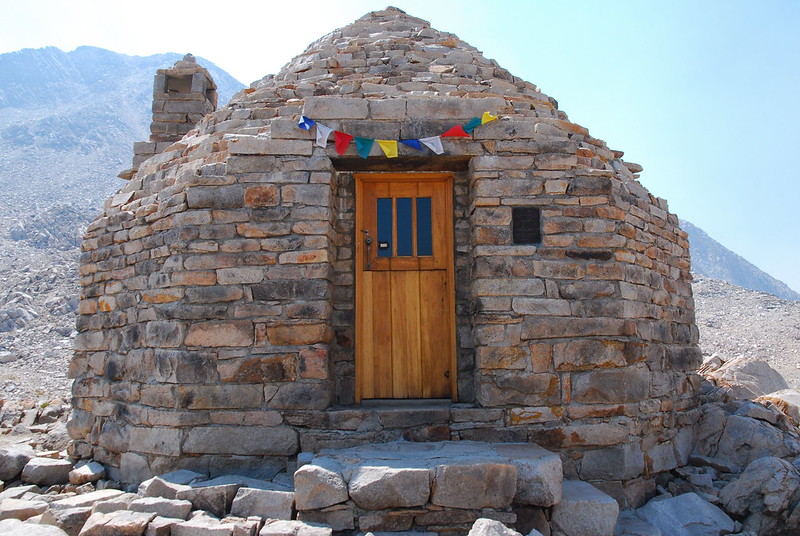 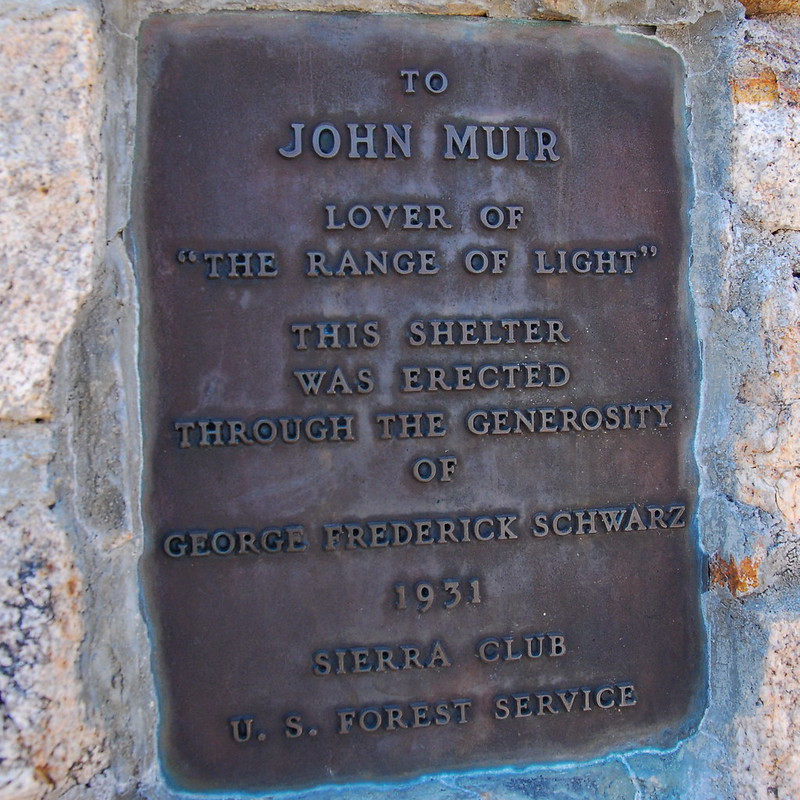 I wait on a rock just below the pass, perched precariously so I can look down on (Real) Helen Lake. I put on some music – The Field, From Here We Go Sublime.

Krista joins me after a bit, and we continue on, down now, into the Evolution Valley. We pass between massive lakes that are more like oceans. We spend at least half an hour weaving along Wanda Lake, named for John Muir’s daughter. It’s probably the most otherworldly thing we’ll see all trip. 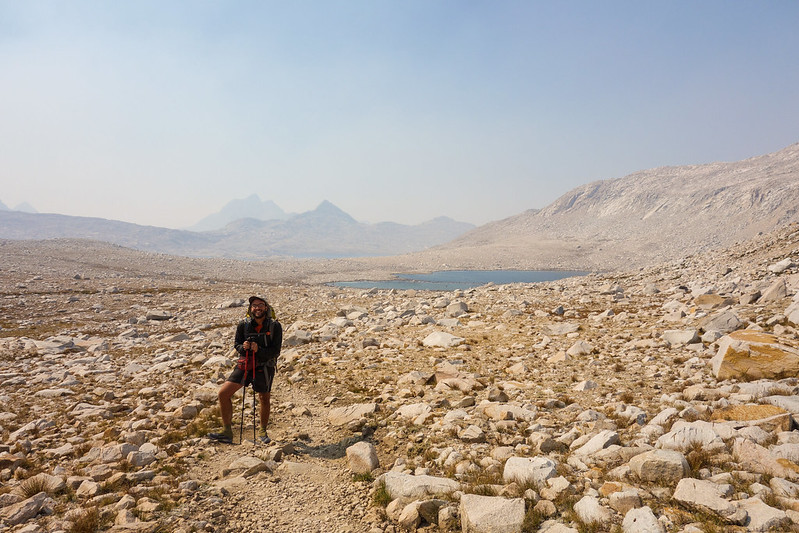 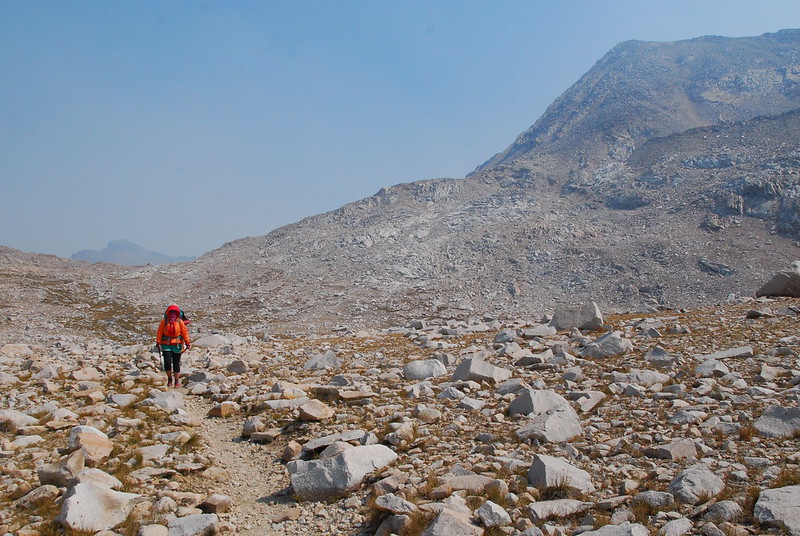 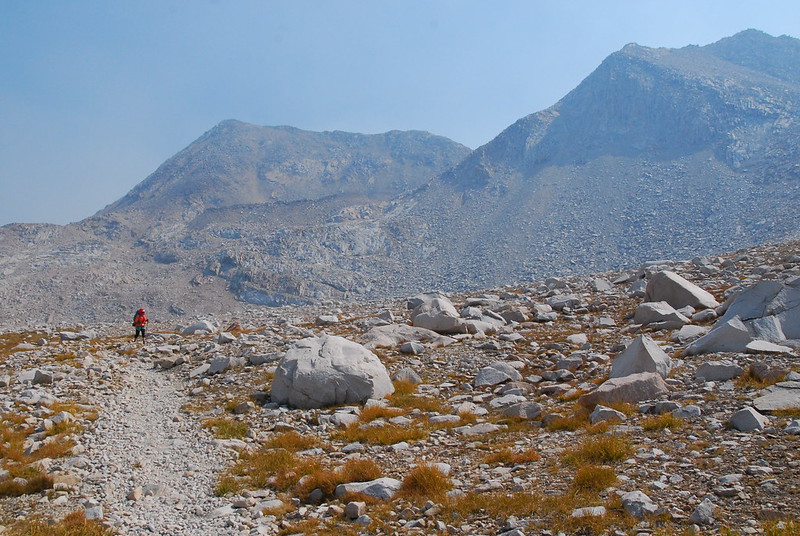 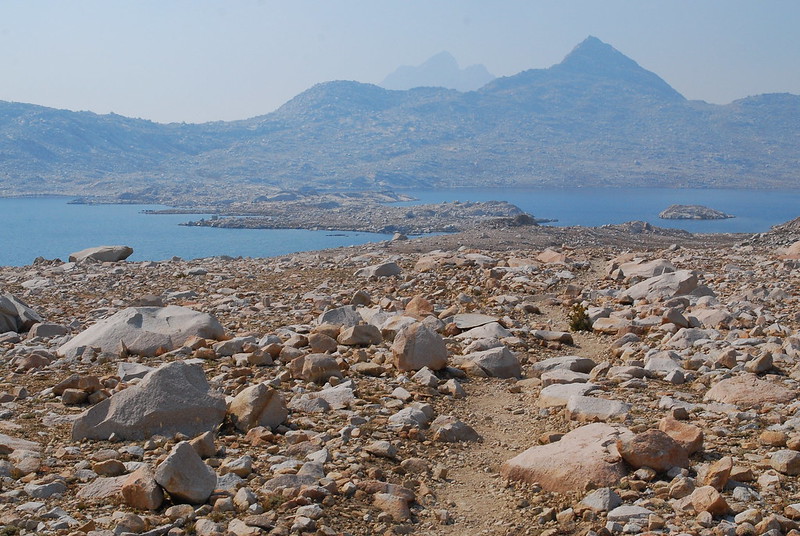 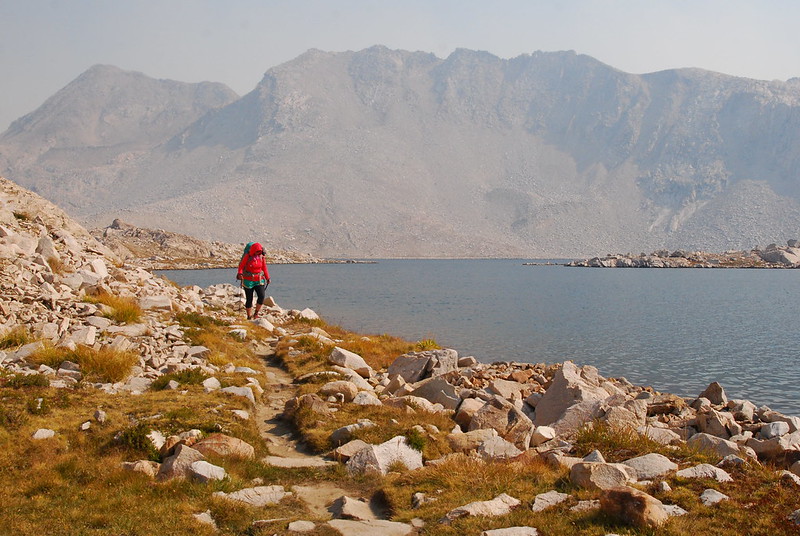 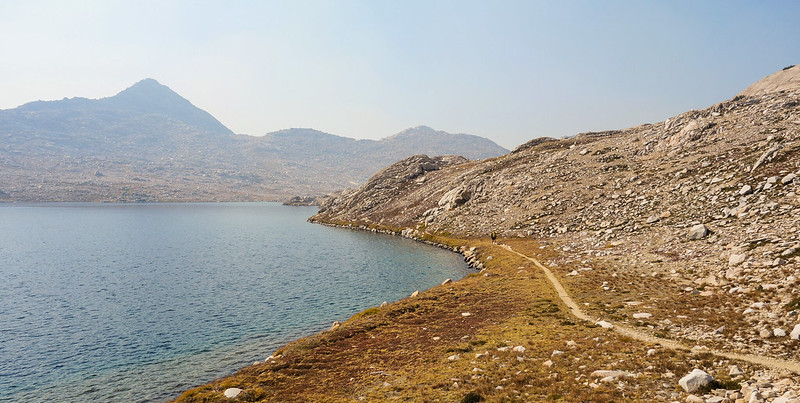 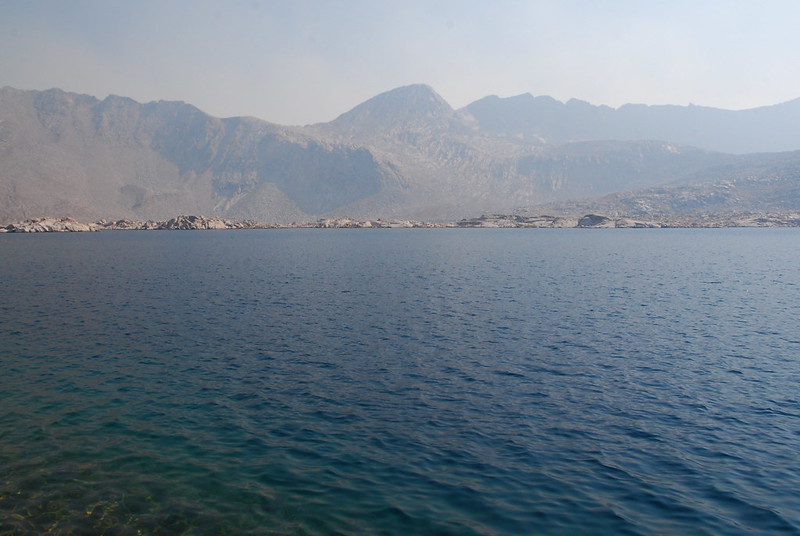 We have a late lunch along Wanda Lake, crouched among the sharp, dry grass. On a nearby rock, someone’s laid out a hundred tiny pebbles to spell “I love you Amanda.”

Wanda Lake drains into Evolution Creek, which then feeds another half dozen lakes lower down. The grass comes back as we descend, and the scenery becomes more earthly. 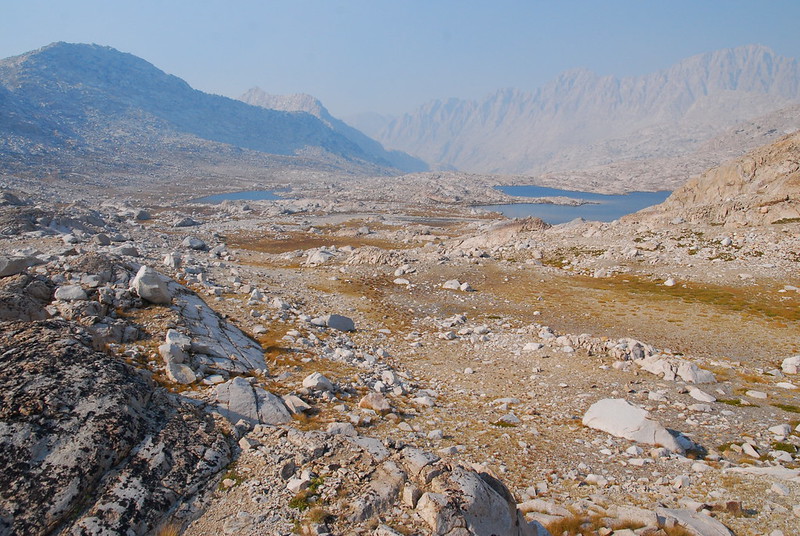 We’ve been vaguely thinking about camping at Evolution Lake, but decide to stop a little earlier, at a bare patch of granite above Sapphire Lake. As we’re setting up, Krista says, rightly, that it wouldn’t seem out of context for a dinosaur to emerge from the valley. It feels prehistoric. 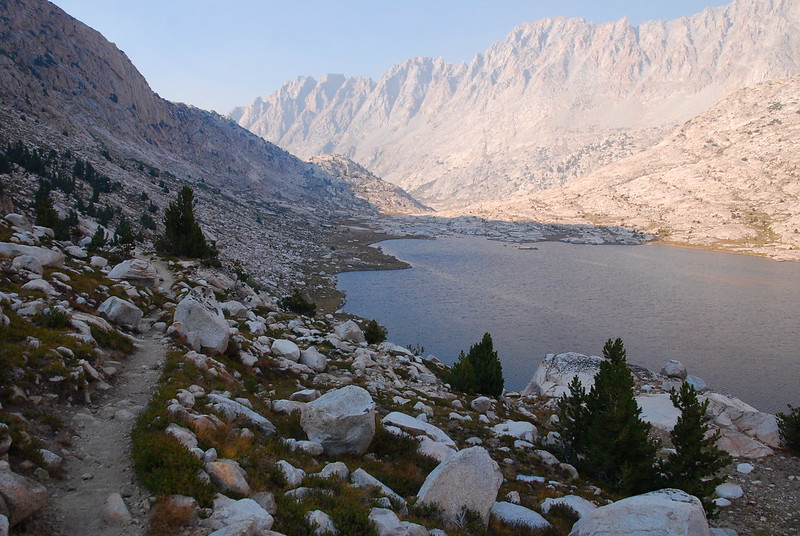 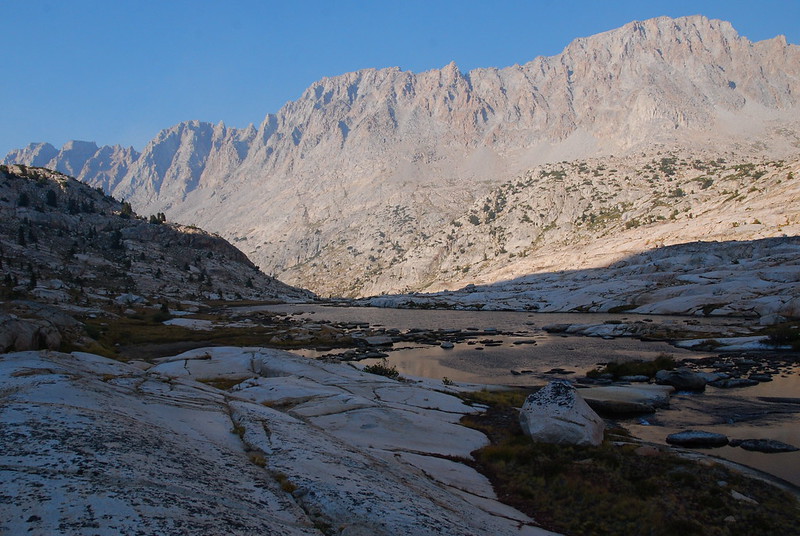 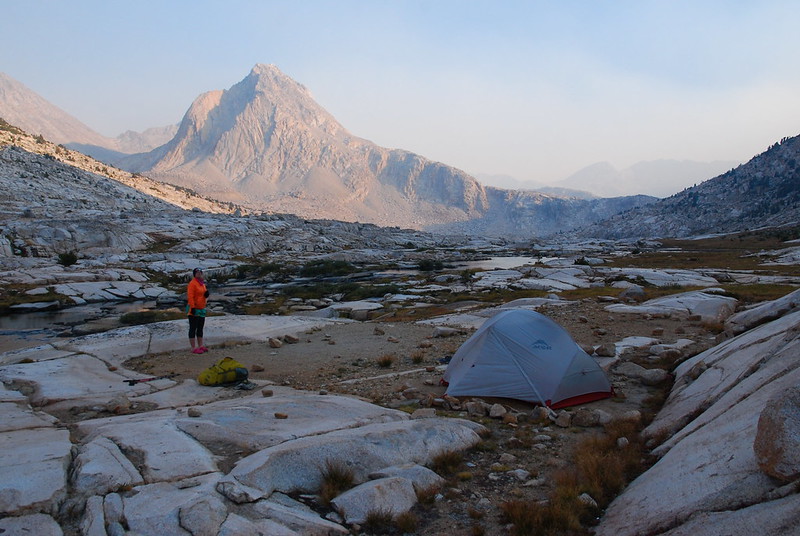 It’s cold up so high. Krista gets chilled just after we get the tent up, and retreats to her sleeping bag. I wander around as the sun sets, drinking the bourbon I’ve been neglecting the last couple days. I’m so, so relieved. There’s still smoke, but not much. It’s mostly behind us now. 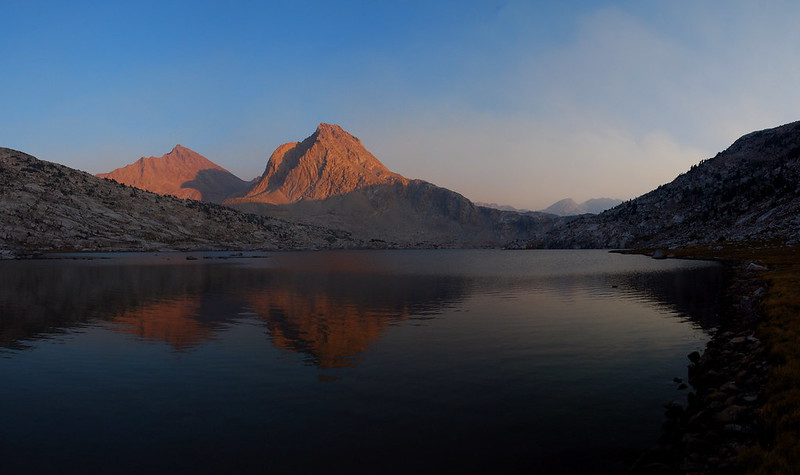 We make dinner sitting just outside the tent, talking lightly, feeling light. I stop every couple minutes to take another picture. I wish my dad were here – he’d love it. We talk about trying to figure out some way to get him down. 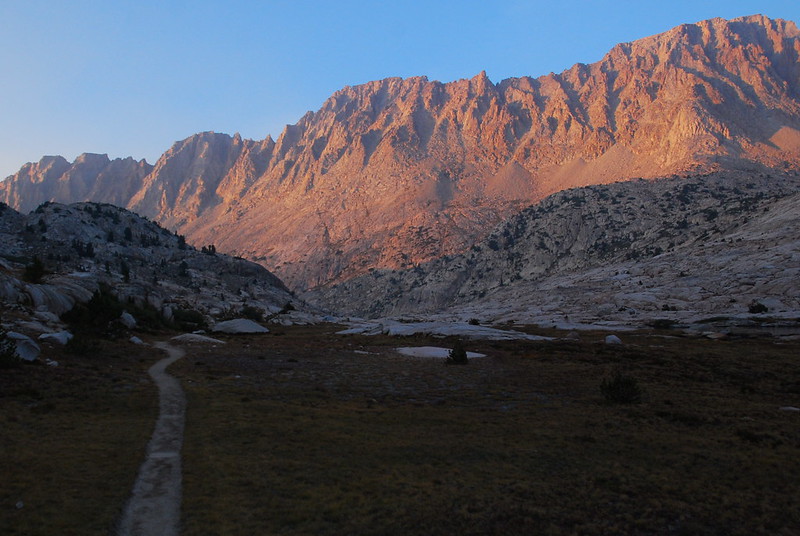 The sun sets and it’s immediately very cold. Krista curls up in her sleeping and my quilt, shivering a little. I stay outside, lying on the smooth rock that surrounds the tent, watching the sky change from pink to red to purple to black. There’s no moon, but the granite all around us glows white with the light from the stars. The creek’s slow here, a gentle broad delta that fans out to the edge of our meadow. But it still sings softly, the only sound for miles.

Krista starts to snore, and I put on my headphones. The Field again. From Here We Go Sublime. I sit out like this for an hour – the whole album – drinking too much and getting cold, watching the stars brighten over the Black Divide.

We made it through.