I’m weirdly nervous to drive (cars move so fast!), but we slowly make our way over Tioga Pass. Krista screams at the speed and drop off. I eat an entire package of dried mango.

We pass Lee Vining and turn north on 395, headed to Reno. Half an hour later the sun begins to set and we stop at a tiny town where we buy twenty dollars worth of chips and soda from a gruff old dude who definitely thinks we’re meth heads.

We drive out into the hills as the sun sets on the mountains and snow clouds. The tops of some of the hills are white. Winter’s coming. We’re coming home.

The white tops turn red. Before this month, I’d never known just how long a sunset could take. How the light keeps shifting for half an hour. How the rocks stay warm for hours afterward.

Krista calls and makes reservations at some seedy but serenely inexpensive casino / hotel / den of iniquity in Reno. We pass into Nevada and things get weird: a hundred gun shops and super cheap gas. We stop at an In-n-Out Burger, where I buy way too much food, and a drugstore, where I buy just enough stuff to shave.

The hotel’s completely overwhelming. We park on the fourth floor in the free garage, and pass a kid jogging through the sky bridge smoking a cigarette. At the entrance, there are a couple of guys in their forties drunkenly leaning into each other, slurring angrily about some girl. There’s a security guard checking room keys before the elevators.

Our room is huge though, and high up with a view overlooking some sort of bowling museum. The city lights stretch away from us in parallel lines until they all join in a glowing swell just short of the horizon.

There are massive mirrors in the bathroom – an entire wall of them, as tall as me, stretching from the counter to the high ceiling. I shower and shave. The shaving takes forever, but I get it done eventually and oh my god. It’s like being a new person. A very sleepy new person.

I open a beer – the first I’ve had since Independence – and it tastes so so bitter. And so bubbly! There’s nothing on TV except for a series of infomercials about the several dozen restaurant that are apparently downstairs in the Casino, and we fall asleep watching a pudgy white guy with thinning hair talk about authentic pho at their “Asian Concept.”

Sleeping in a bed! With big Casino Covers and a set of pillows that together way nearly twice what my pack did at the end of our trip! Fuck it; let’s watch some TV before getting up.

The casino has an improbably good bakery attached to it, where we eventually wander down for donuts and coffee. I put in something like a liter of cream.

We pack up and head out, throwing out a bunch of gross hiking stuff in the room’s too small trashcan. People, mostly older folks with deep tans and Hawaiian shirts, keep asking about our backpacks, and they seem genuinely interested when we tell them where we’ve been. An old man tells me a story I don’t really understand about Lake Tahoe twenty years ago and hot dogs and a tarp that turned out not to be waterproof. A story, I later realize, about what it was like to be young.

Reno’s ugly in the morning: bare lights embarrassed in the sun, a parking garage that smells like vomit. We turn out onto the crowded freeway, then out of town, back to the bare hills and windy interstate.

We stop for gas just before California border at a squat station painted like an American flag, standing small and alone among the impossibly rolling desert that surrounds it on all sides. Then back to the road, as the hills fade into high prairie. Basin and range. It’s beautiful again.

Fifty miles out of town, we stop at a windswept rest stop at the edge of a massive meadow that stretches a hundred miles to the horizon. People in shiny subcompacts come and go while I stare over the meadow. There are mountains over there. What are they? Is there a trail? Of course there’s a trail there. Maybe we can…

My stomach rumbles. Maybe we can get something to eat.

We stop for lunch at a pizza place in Susanville that is exactly like those places you used to go for soccer parties in third grade. Krista’s stoked. 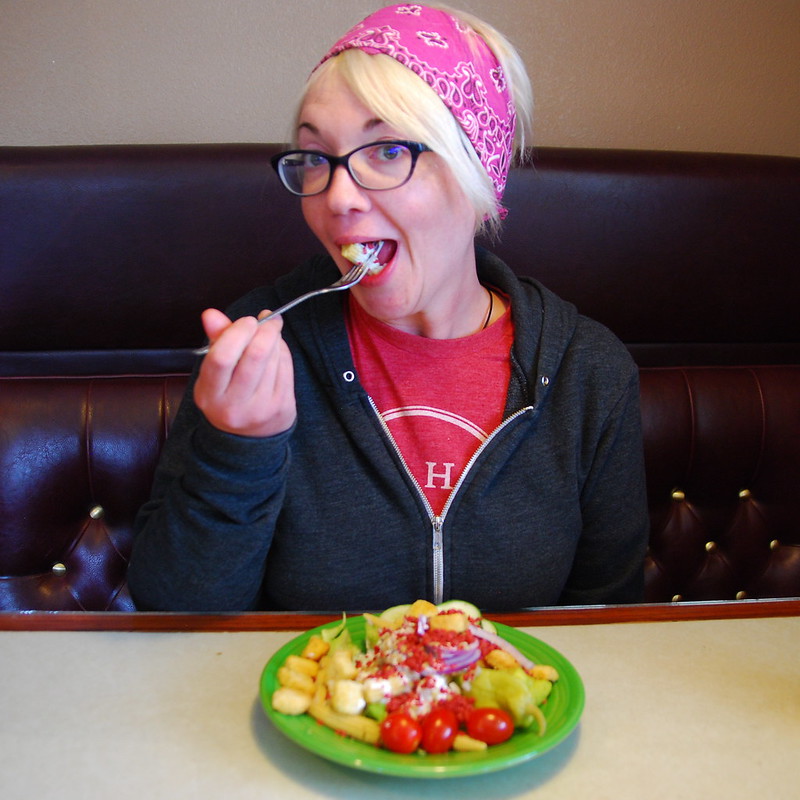 The road’s ruler straight for a hundred miles. We finally pass into Oregon near Klamath Falls, then climb back into high pines. Just as the sun’s setting, we stop for gas at one of the tiny tourist trap towns near Crater Lake. It’s cold up here! Then another fifty miles without turning the steering wheel.

We eventually make it to Bend, where we follow a convoluted set of cell phone directions to Baldy’s BBQ. We order half a chicken, a full rack of ribs, some brisket and pulled pork, and an embarrassing number of sides. We can’t quite finish it all, but we make a good showing, and I’m suddenly very, very tired.

But the roads are familiar now. I remember driving back this way from South Sister, just a few months ago. It feels like forever ago.

We pass through Sisters, all shuttered for the night but for a deer walking brazenly down the main street. Then over Santiam Pass. As the drive drags on, we play dueling music. Krista puts on Bon Jovi. A bold choice! But then I put on Andrew W.K. My trump card.

We stop at a dark rest stop near Mount Jefferson, and I stare up into the unseen mountains. I wonder how many people are sleeping up there tonight.

Krista comes back and we drive the fifty miles west to I5. Just as we begin to see the freeway lights, my favorite song on the album comes on.

“Do all the stuff that you love.”

We make it back around midnight to excited cats and several hundred emails each. The latter, we decide, can wait, and we fall asleep in our clothes with the cats traipsed on top of us. Home.

There’s an old thought experiment in philosophy, about a woman – Mary – who has somehow never seen the color red. She’s read all about it. She knows the physics and neurology behind color, and she can tell you, technically, everything we know about it. And she’s read all the poets too. Hundreds of thousands of words about red flowers and sunsets. But she’s never actually seen it.

The interesting question people usually ask is about what new Mary learns when she sees red for the first time. What she learns can’t exactly be put into propositional form – she already knows all the propositions there are to know about red – but we still want to say that, in an important sense, until she saw it for the first time, Mary didn’t really know what the word “red” meant.

The example’s usually used by philosophers of mind as evidence that human perceptions aren’t reducible to a set of empirical or logical propositions, and that’s surely true. But what’s more interesting to me is what the example suggests about human experience more generally.

There are a lot of things like Mary’s red, which we can’t know until we experience them. And sometimes those things are so big that they do not just add a small something to our existing store of experiences, but rather fundamentally transform our ways of experiencing and being in the world. Mary’s world after red is bigger, and different, than it was before. And it’s bigger in a way that she couldn’t have explained to you before the experience. Maybe also in a way that she couldn’t explain to you after.

There is nowhere in the world where I cannot, with enough effort, be at home.

I’m writing this in late April. It’s spring in Oregon, and all the flowers are popping up. The sunsets have been beautiful, as the winter clouds fight the summer sky.

The other night I was driving home from Eugene just as the sun was setting. I pulled over onto an old county road and got out of the car to watch. There was an old store down the way, and I walked down the shoulder to have a look. I bought an iced tea from a kind old man, then walked back to the car, and sat drinking on the still warm hood for half an hour, as the light shifted and the entire sky turned red.

One thought on “JMT, Afterward: Getting Home”