Last night was cold. Cold and windy. Also: there were mice. Like, a lot of them. Scurrying around the tent. At some point around midnight, one actually scampered to the top of my tent, and just stood there for a second. Maybe playing king of the hill? I’ve been hanging my food all section, so no worry there, but still: huh?

I slept in late, full of strange dreams about a kingdom of mice, then ate breakfast in the tent, hiding from the several thousand mosquitoes who’d woken up early to see me off.

I’d sort of been thinking that today would be just about making miles down toward Stehekin, but the South Fork Agnes valley is actually stunning: the trail traverses high above the creek, just below Sitting Bull and Saddle Bow Mountains, flanked on either side by high, rocky ridges. As it descends it contours around cavernous basins, crossing countless cascades and bright green fields. 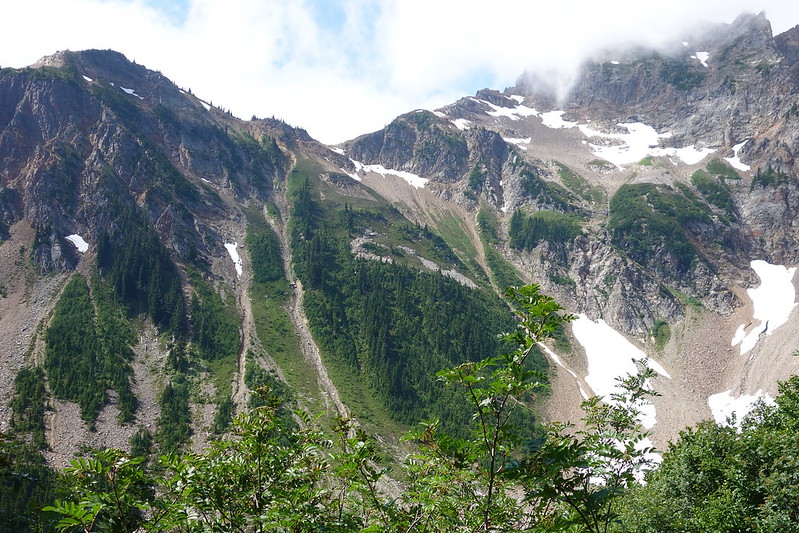 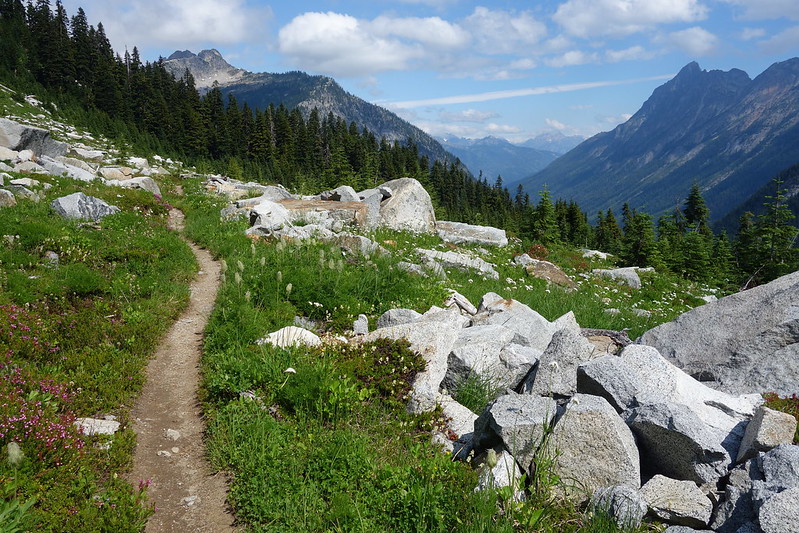 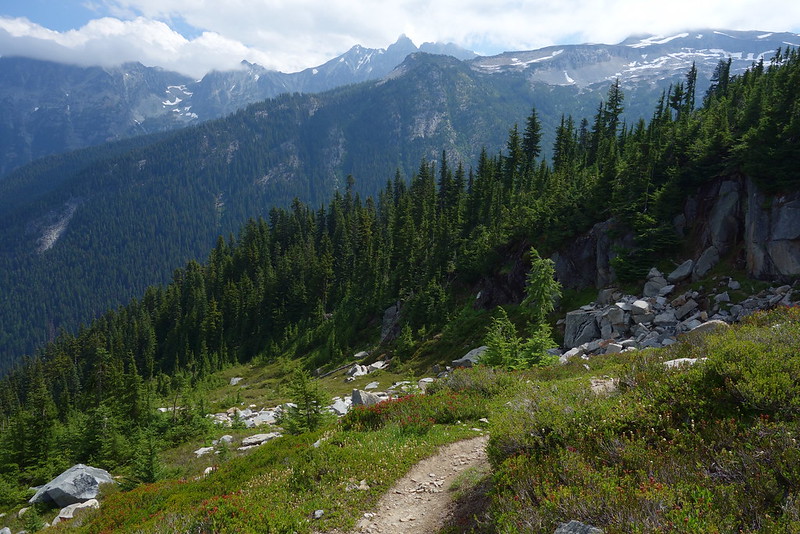 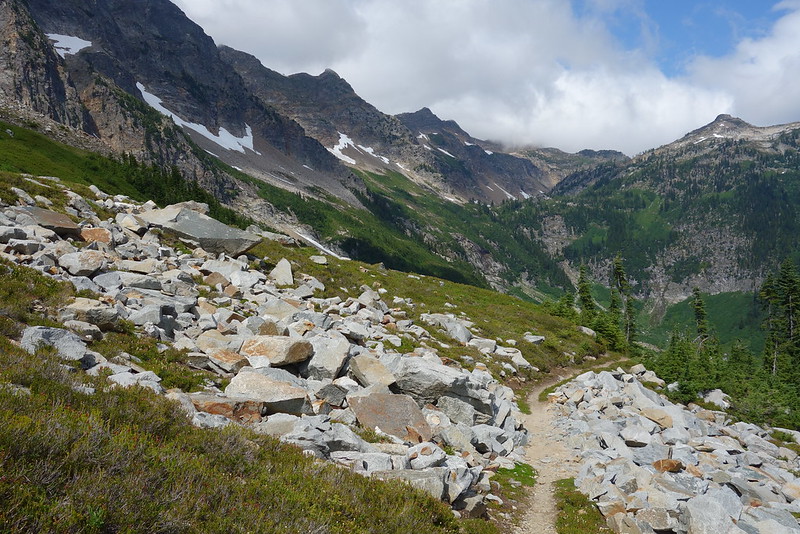 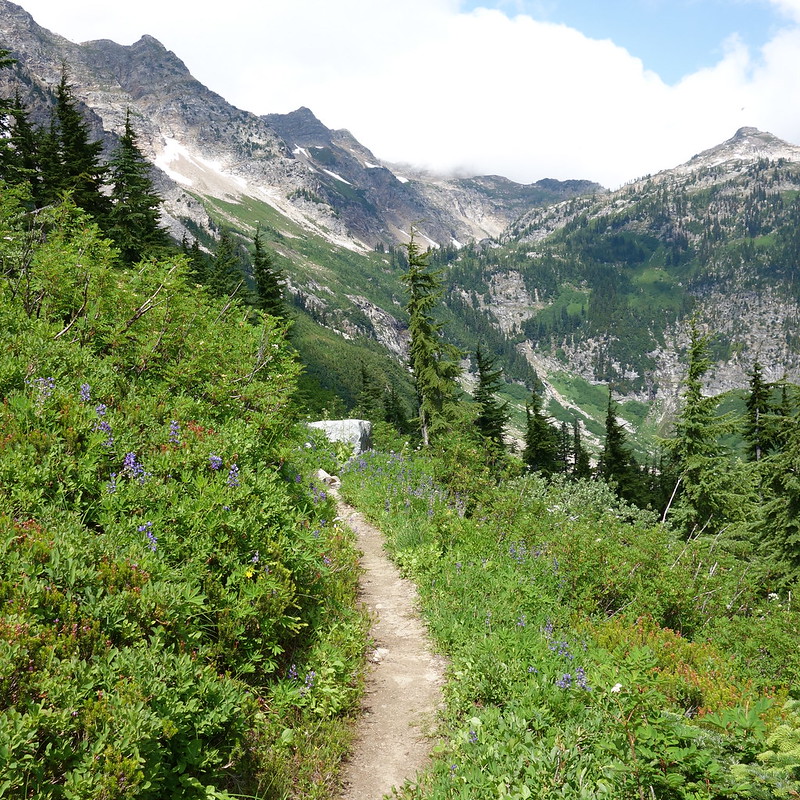 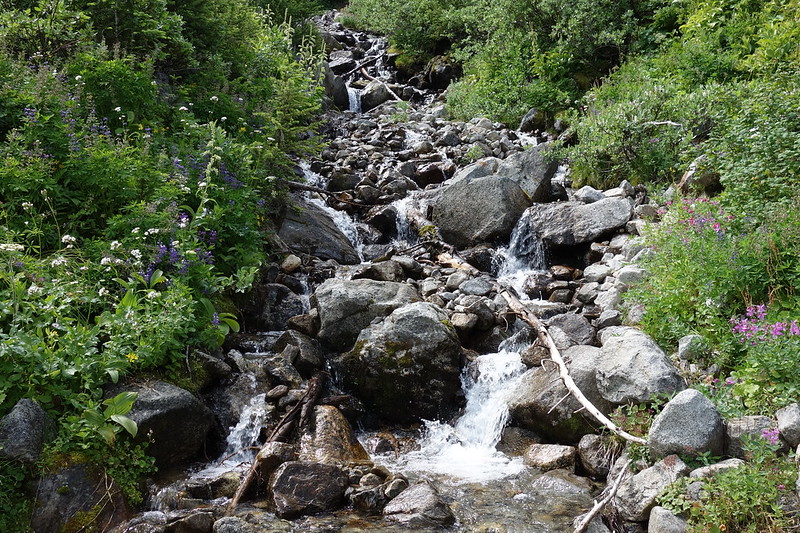 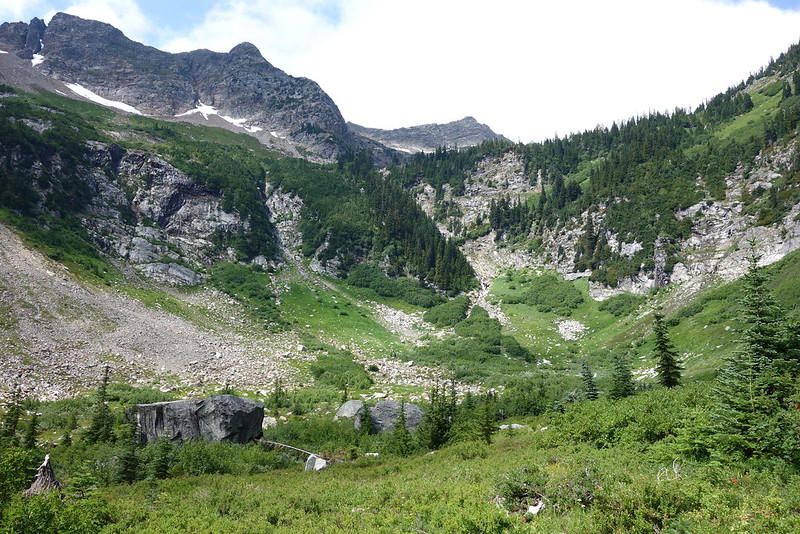 Eventually the trail entered the woods, and was immediately overtaken by brushy Salmonberry or something, which sometimes grew as high as my head. It was rough going for a few miles, bushwhacking through immortal vines in the land that time forgot. 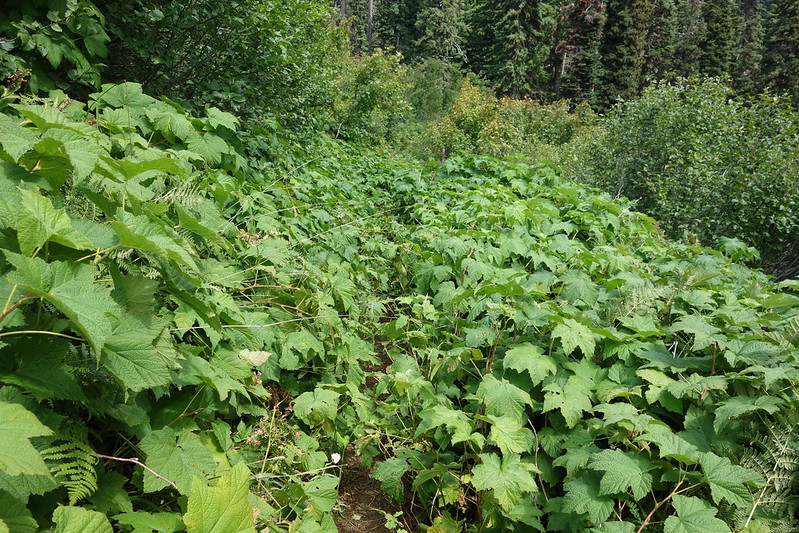 But then, as soon as I crossed the Agnes Creek, the trail suddenly became posh—a thick flat path, sometimes lined with rocks just for good measure. 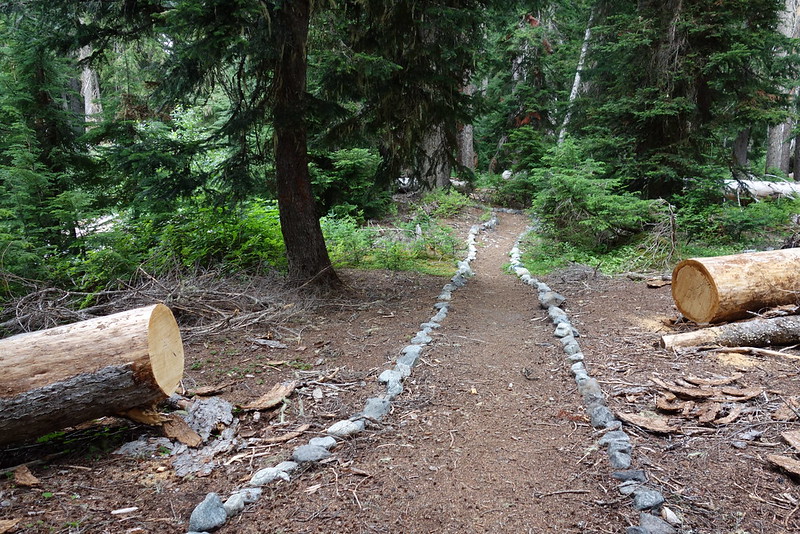 I spent the afternoon flitting absentmindedly along the creek, over minor hills or across minor drainages, but generally just walking easily in the cool woods. Clouds came and went, threatening rain but never giving more than a light drizzle. I stopped to pick berries and take pictures, to look back up at the mountains, and finally for a late, light lunch on a granite perch a few feet above the rushing river. 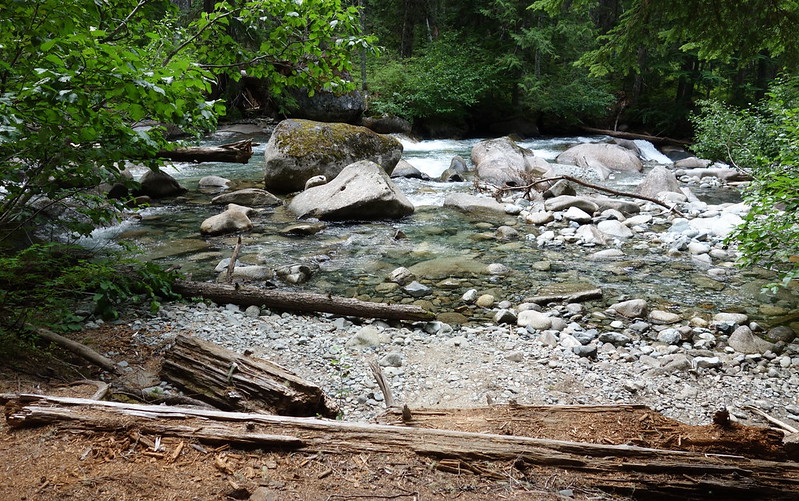 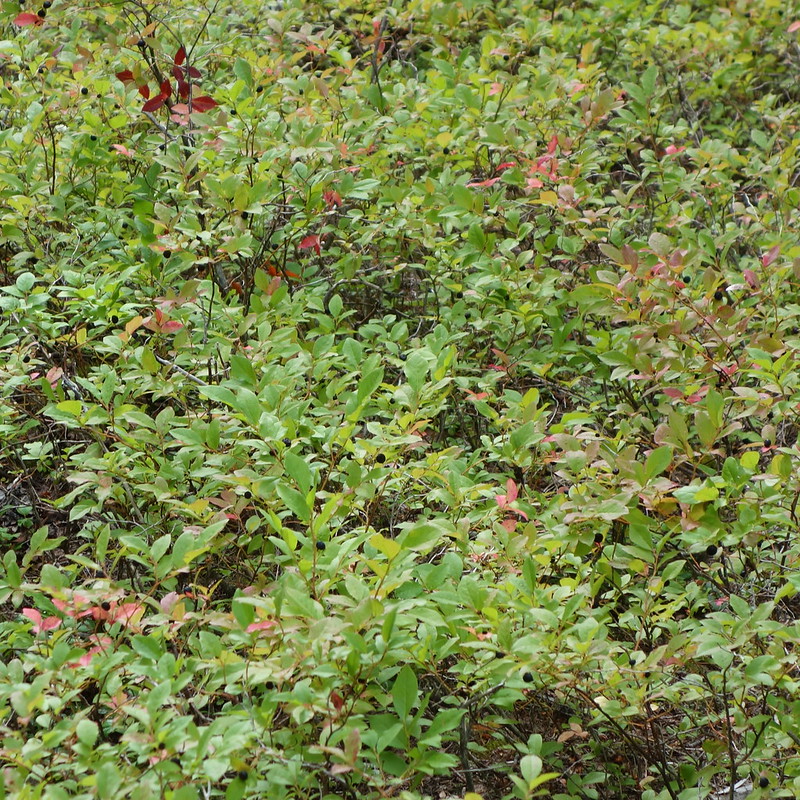 Camp tonight’s a massive set of clearings just south of Pass Creek, with room for dozens of tents but where I’m the only one. I got everything set up by the early afternoon, and so have spent the last several hours relaxing: picking more berries, bathing in the creek, skipping stones, and writing to Krista.

Maybe I should have said this earlier: I’ve been writing Krista a letter every day, just like she pre-wrote a letter every day for me. It’s always the best part of my day—reaching across some strange void into my utterly ordinary, unimaginably wonderful future. But for the last few I’ve been so tired that the letters had been sort of cursory. So I sat out this afternoon under the clearing sky, and tried to write a good one.

Just as it was reaching the time at which one might contemplate the convivial pleasures of a pre-dinner drink, I heard a loud singing through the trees. Several young male voices singing an old Green Day song, “When I Come Around,” laughing at the end of each verse.

“I’m just roaming for the moment…”

As they passed, I said hello in a hospitable tone that surprised me. It was the sort of tone more often reserved for welcoming someone to your home. Maybe that’s what I thought I was doing. 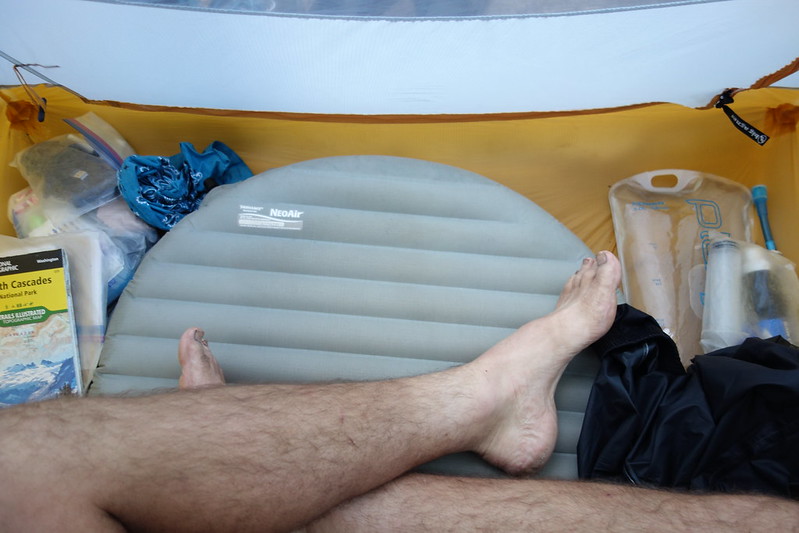 After dinner I sat out late, watching the clouds turn purple then recede to reveal an ocean of stars. In the tent, I’ve been looking over my maps. I’ve gone a bit over four hundred miles, and have less than fifty to go. Fifty miles used to seem so long, but now it’s nothing. I traced the route so far with my finger, remembering moments along the way. They all seem to exist at once, overlaid on each other in some great palace of memory.

It all seems so improbable: this trip, the footsteps fading into miles, the moments fading into days. It all just seems so… so big. So impossibly big. But then I guess everything feels improbable when you look at it that way. Time’s a steady march up a gentle grade, but then to look back is to look over a bluff, and to see the whole thing at once: small pleasures and moments and days and years bunched on top of each other, the shapes of people and places and things made strange—elongated and echoing, out of order, immersed and immeasurable in the time of my life.