I wake after what feels like thirty seconds, to sunlight and the sound of sticks breaking around my tent. I look out bleary-eyed—where the hell are my glasses?—and see what look like two cats, frolicking around in the underbrush. I think vaguely that the cats are up earlier than usual for breakfast, and wonder if Krista fed them on the way to work.

But then, well… yea. I’m not at home, and those probably aren’t our cats. I mean, Captain Nemo’s pretty intrepid, but even he would’ve had the good sense to turn around at Heart Pass.

Deer, it turns out. A doe and two fawns.

The doe is utterly unconcerned with me, grazing on grass and doing her morning business. But the fawns are more curious; not scared, exactly, but curious. 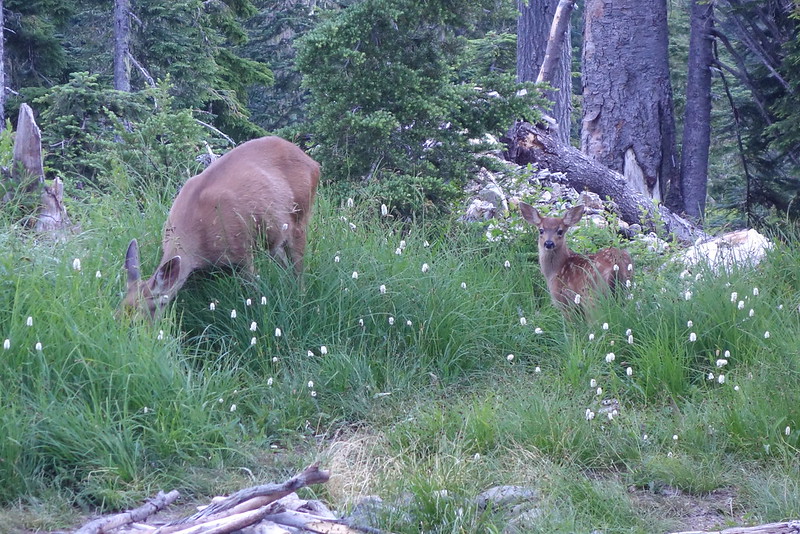 I finally find my glasses—I guess I put them in my shoe for some reason?—and spend the morning sharing camp with them. I worry a little about starting my stove for breakfast, but they don’t mind that either. 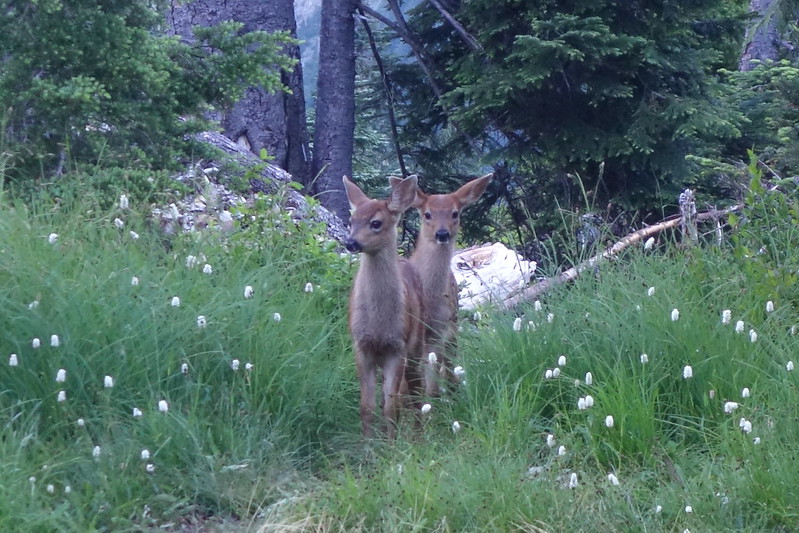 Watching the fawns, I think of the life they’ll live here. If they stay in the Park, they’ll get to go on almost like they used to, before the trails, or O’Neil, when wilderness was just the default state of the world. And if they stay up here, they probably won’t have to deal with too many people, either: me, maybe the occasional long-distance hiker, but most nights, this meadow should, this whole world, should be theirs.

After our breakfast, the deer eat and run, and I follow suit soon after, down to the East Fork Quinault, then up to Anderson Pass. 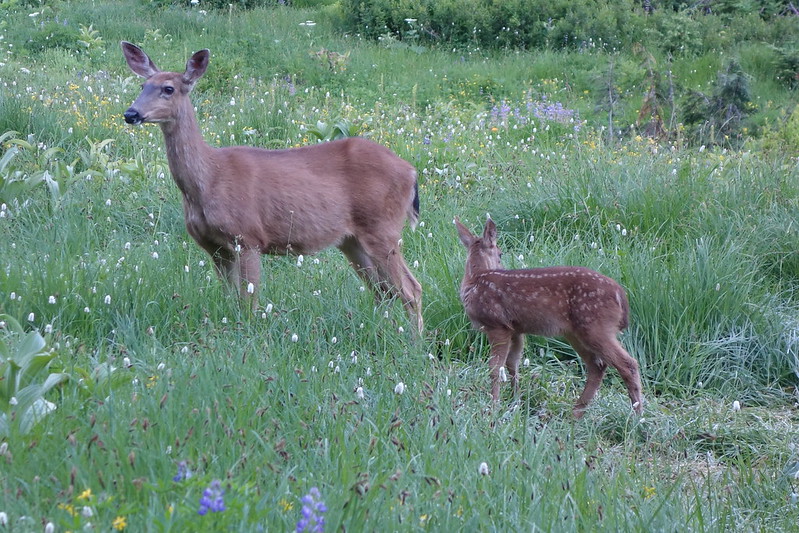 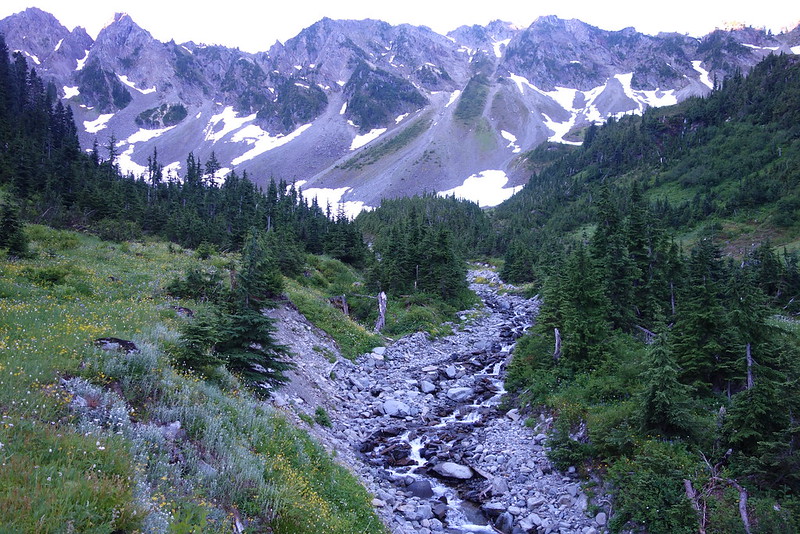 The trail first travels high above the Quinault’s rapid roar, then descends to cross several small tributaries, only to switchback up again, now through overgrown paintbrush and scraggily, rock-strewn stands of silver fir. The river frays and braids at its headwaters, split into half a dozen whitewater creeks. 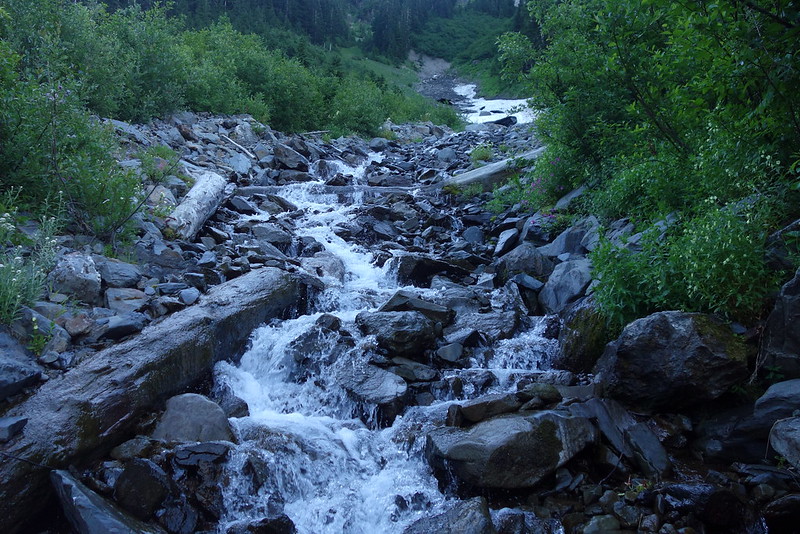 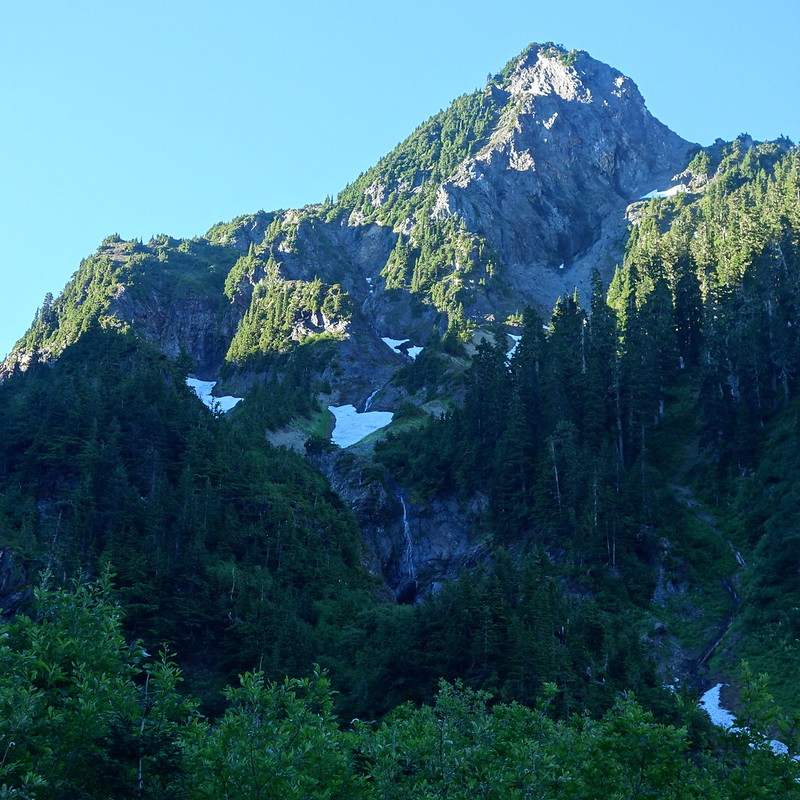 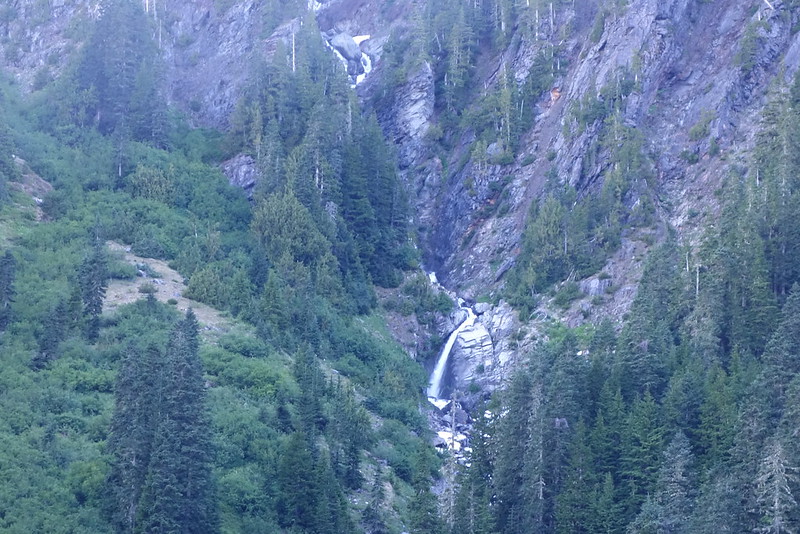 Anderson Pass itself is sort of underwhelming: just a couple dusty pools and an ancient camp. But beyond, through the trees, there’s the West Fork Dosewallips, rushing its way through the steep, rocky valley that separates Mts. Anderson and La Crosse. And above, creaking out of sight, is a cluster of glaciers—Anderson, Eel, and Hanging—central sheets of ice, sliding down the headwaters of three rivers. 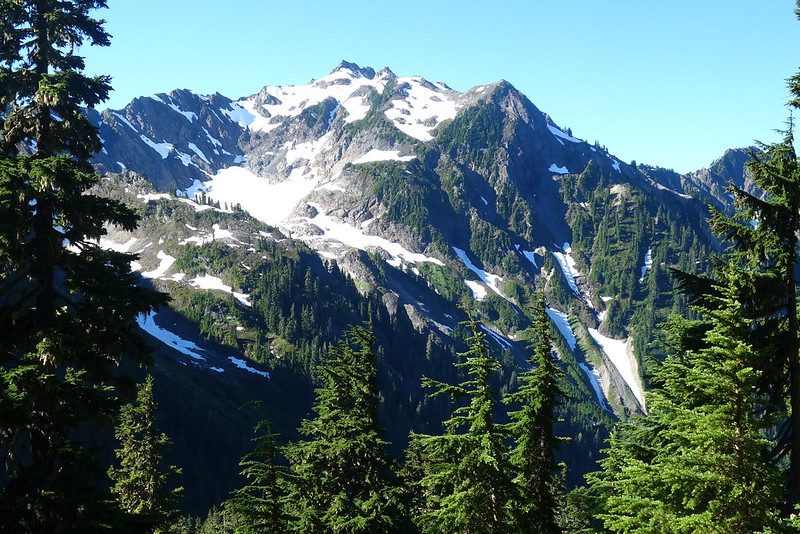 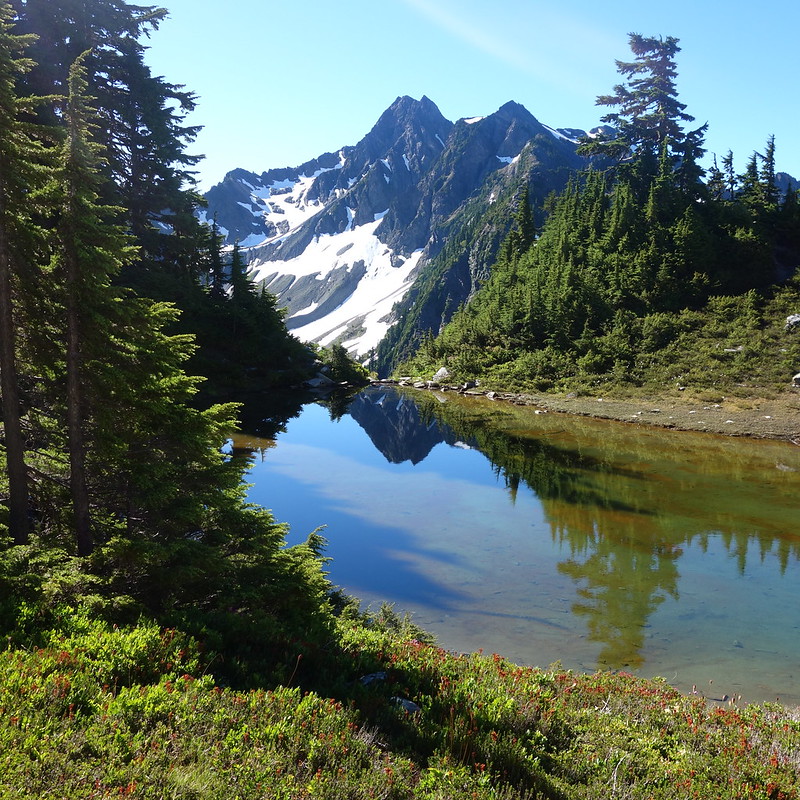 I’m making good time, and so take a side trip up to the base of Mt. Anderson, switchbacking through the flower-filled meadows that hang below Anderson Glacier’s lateral moraine.

On top is a half-empty basin, once filled by the glacier, but now mostly a lake, and boulders, pushed to the edge of once was.

I climb the terminal moraine and eat breakfast, staring down the Quinault’s deep cut valley, winding almost all the way to the ocean. 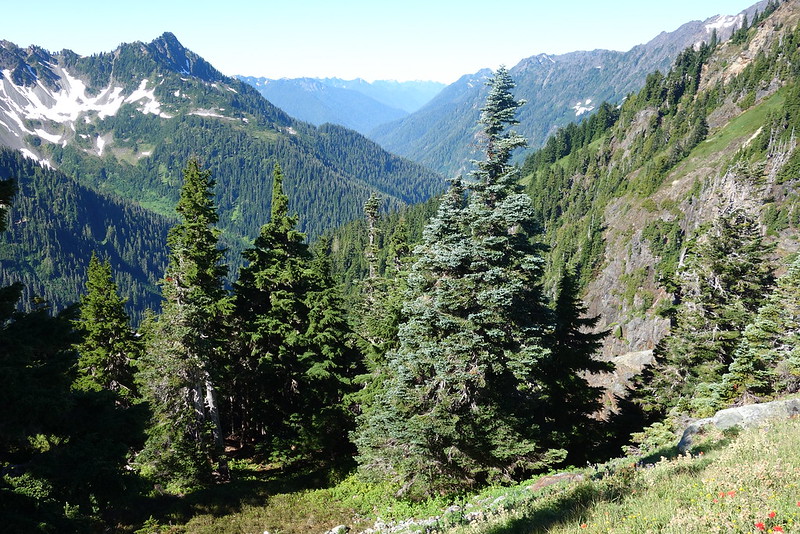 Back down at the pass, the path continues north, down the West Fork Dosewallips, first through subalpine meadow, then increasingly into old growth, which fades from thin to thick as the trail descends a glacial step to Camp Siberia. 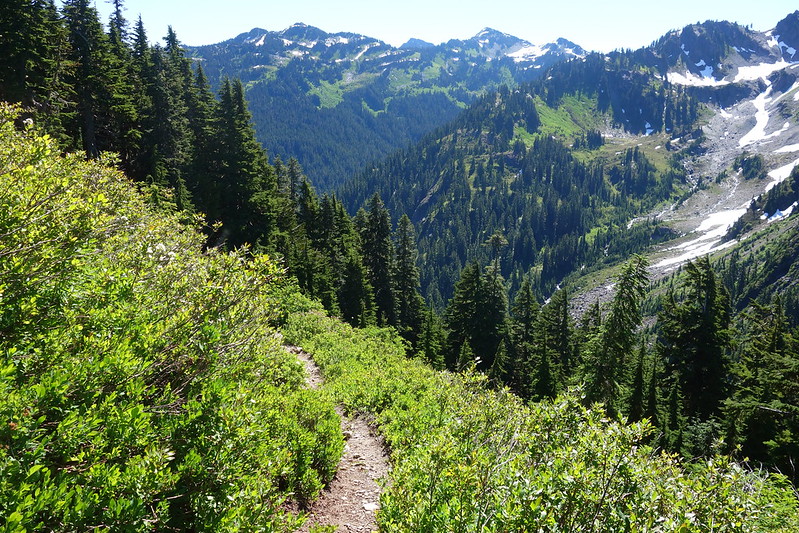 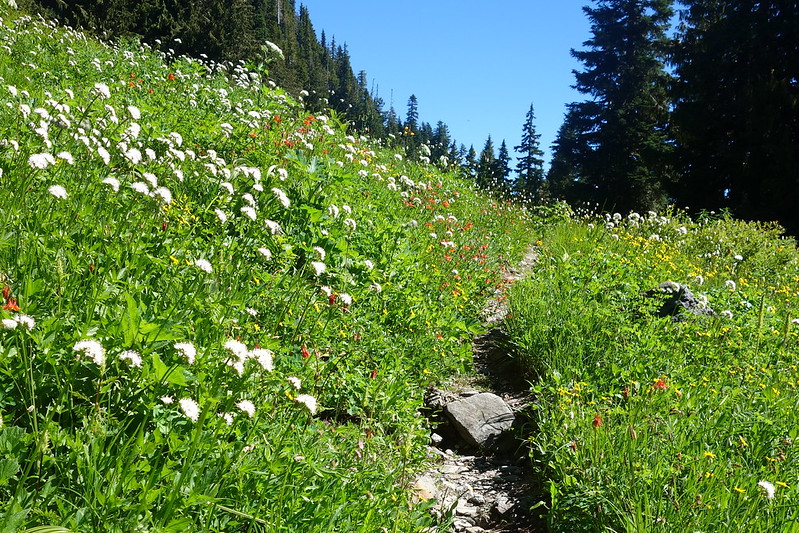 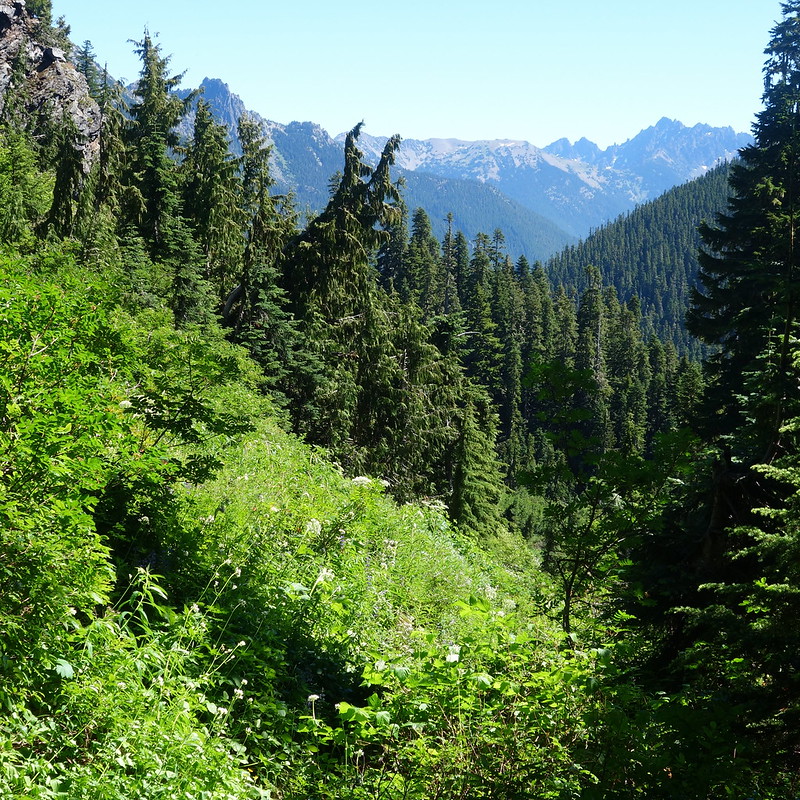 The tread here is bizarrely bad: full of blow down and minor slides, where streams have cut their way through the trail. Then a full on avalanche, where snow has seemingly sluffed from East Peak and broken a way through the trees. 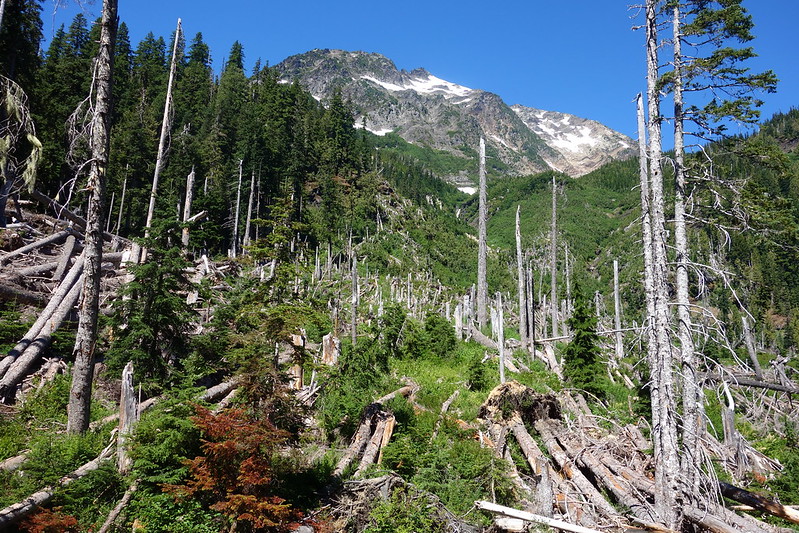 There’s a crossing somewhere around here, but any semblance of a bridge is simply gone, bound up with the blown down trees that block the river at several points. So I wade across, thigh deep, and scramble along the river bank until I find the—or, at last a—trail. 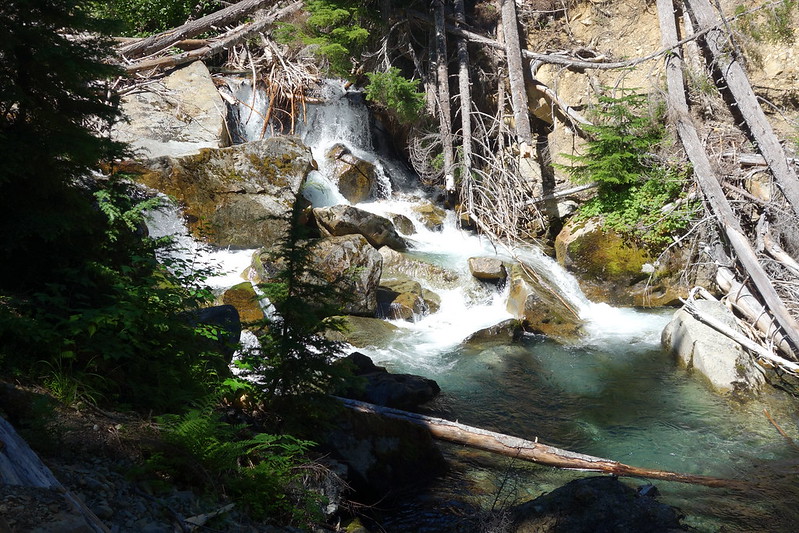 After the first crossing, the way eases into ancient stands of Douglas fir, the roots and rocks now replaced by a thick coat of deep green moss. And time softens too—easy miles in the early afternoon shade. 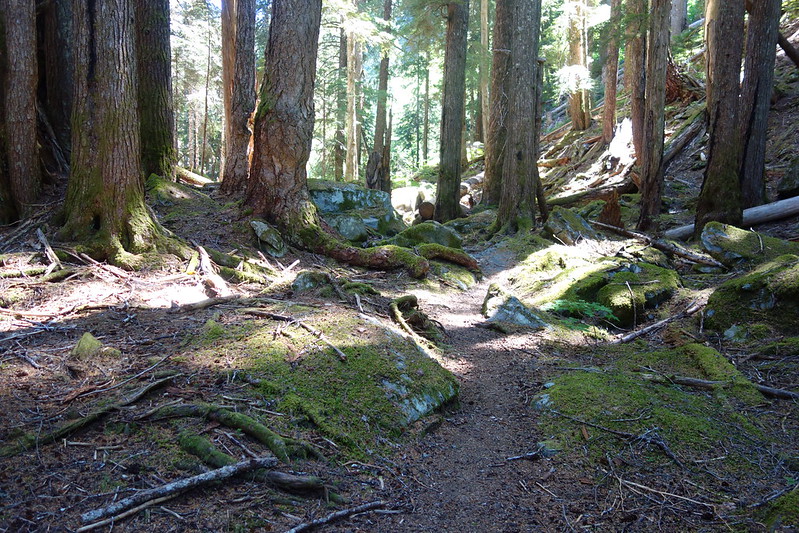 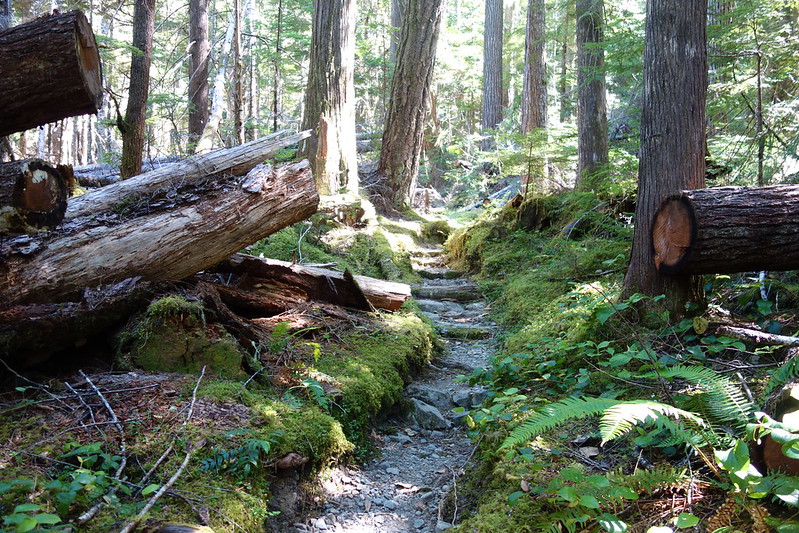 I walk in a sort of wooded haze: down more glacial steps, twice more across the river, and by several old camps, spread out along the banks. By mid-afternoon I’m at Dose Forks, where the West Fork flows into the North. 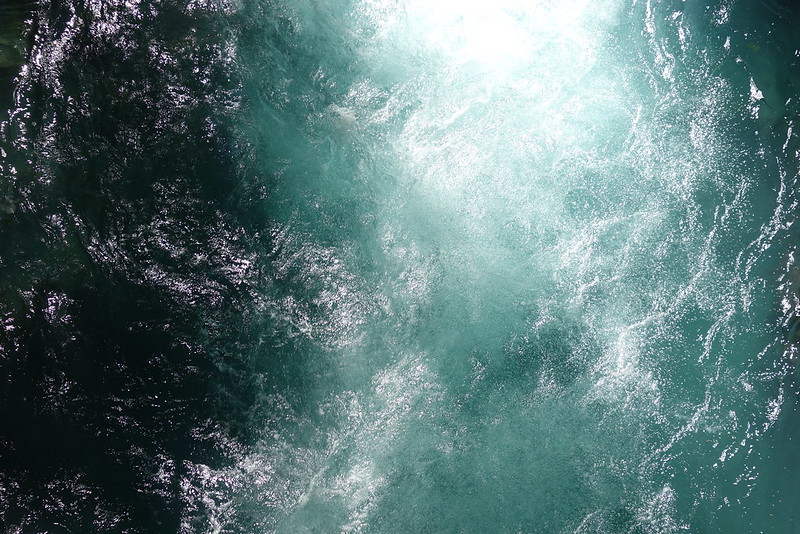 I lunch along the river, under a bridge with my feet in the water, then reluctantly start back up, the main (North) Fork this time, climbing high above into still, shaded woods, punctuated only by the occasional stream rushing down from Sunnybrook Meadows or Mt. Mystery, and the distant stirrings of deer, up in the hills. 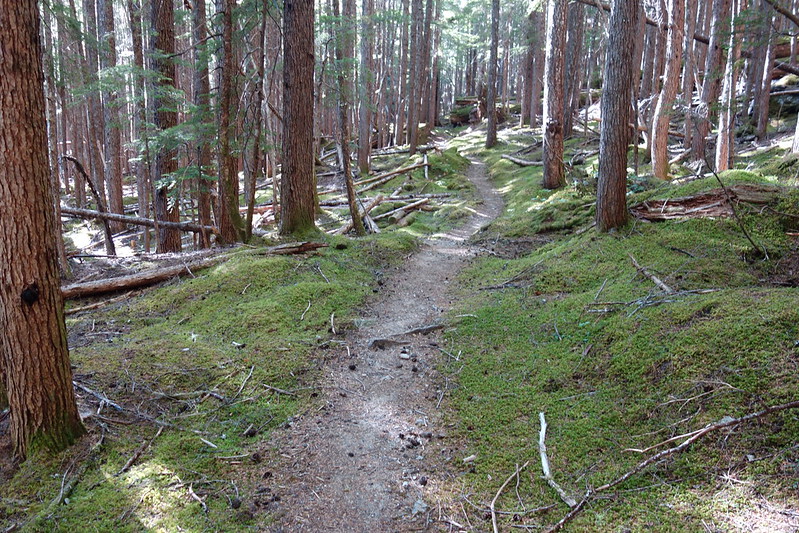 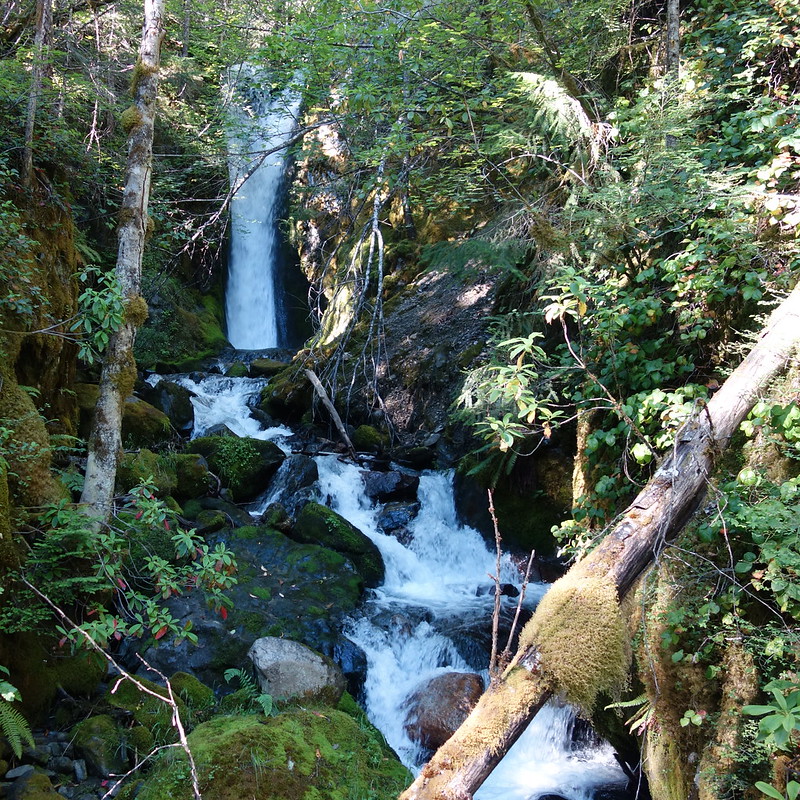 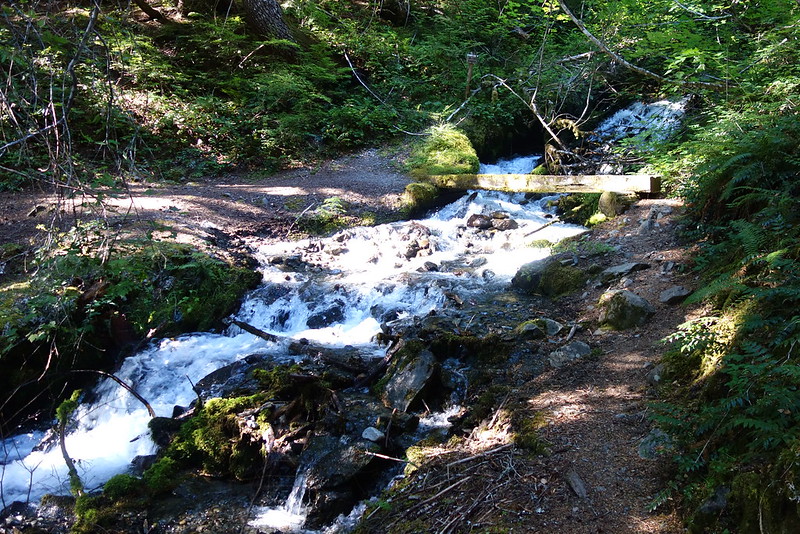 Camp tonight’s a small, flat perch above Deception Creek, overlooking a large group camp of boyscouts, all studiously acting out some strange idea of wilderness. They’re the first group I’ve seen all day, and it’s weird to watch: the adults are all militant efficiency, barking orders at no one in particular, and the boys seem exhausted and obedient, still in button-down brown shirts.

I wonder what it feels like for them. Is this a good time, something they’ll remember fondly some day? I watch them file down to the river, one by one, taking turns filtering water. Then they line up their identical bear cans, counting steps from camp to measure what I take to be some pre-ordained distance, before disappearing into their identical tents, beating the sun to bed.

And I think of my dad, sitting in camp in an old ripped t-shirt, making cocktails or dinner on his terrifying old stove, insisting on a late-night ramble to see the stars, lying out in the middle of a meadow until we’re all half asleep.

Well after dark I scramble down to the river, for some water, and to soak my feet, and maybe to read a little or have a cocktail along the rapids. After a few minutes I’m joined by one of the scouts, his headlamp dimmed, out I guess for a little extra water, or maybe just a secret stroll.

“Is there an official campsite up there?”

“I don’t think so, but there’s probably enough flat space for a tent.”

2 thoughts on “Across the Olympics, Day 3: Everything That is the Case”