It’s four in the morning and my alarm is going and all I can think is that I’ve somehow set it for the wrong time. The cat’s asleep on my feet and seems to think there’s been a mistake too. But no, it’s time to go.

I have this theory about starting early: you have to just get up and go, because if you think about it, and especially if you take “just a couple more minutes,” you’ll end up sleeping until some sane time. So I jump out of bed, feigning a readiness to face the day, and stumble down to the coffee machine.

The drive to the St. Helens winter climbing route is astoundingly quick, and an hour and change later I’m pulling into the icy lot amid twenty other cars, all with headlights on, all full of people in varying degrees of undress getting ready for the climb.

I slump out into the biting, pre-dawn cold, and futz with my pack. A woman in the camper next to me rolls down her window, holds a raincoat in front of her chest, and asks if I think snowshoes will be necessary.

The sun starts to rise just as I leave the lot. In half an hour, I’m down to a t-shirt. I pass a group of over-outfitted older men, then get passed by a crew of skiers literally running up the hill. 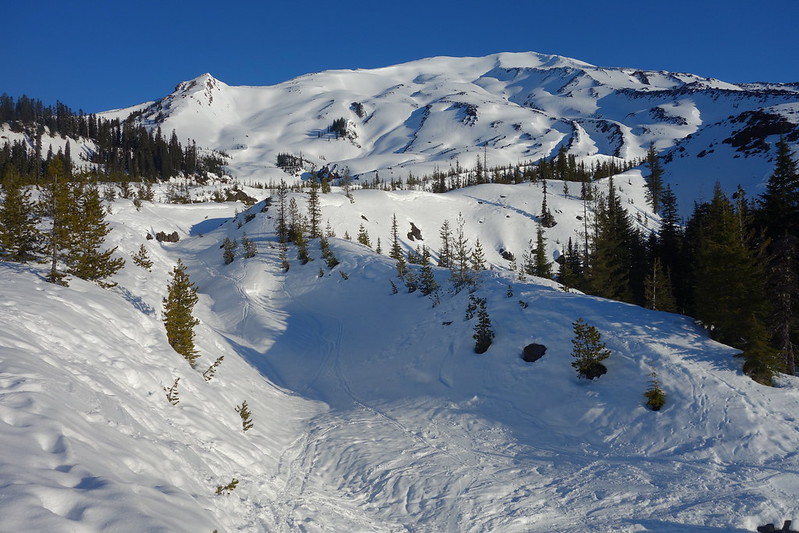 Last time I was here, I was exhausted basically from the start. But this just feels easy and fun. I wonder how to think about that change. Part of me feels almost proud of it: my body can do things now that it couldn’t before. But part of me is also really embarrassed to be something like proud of it: what a silly thing to care about, being able to lug oneself up a hill with a vague sort of efficiency. 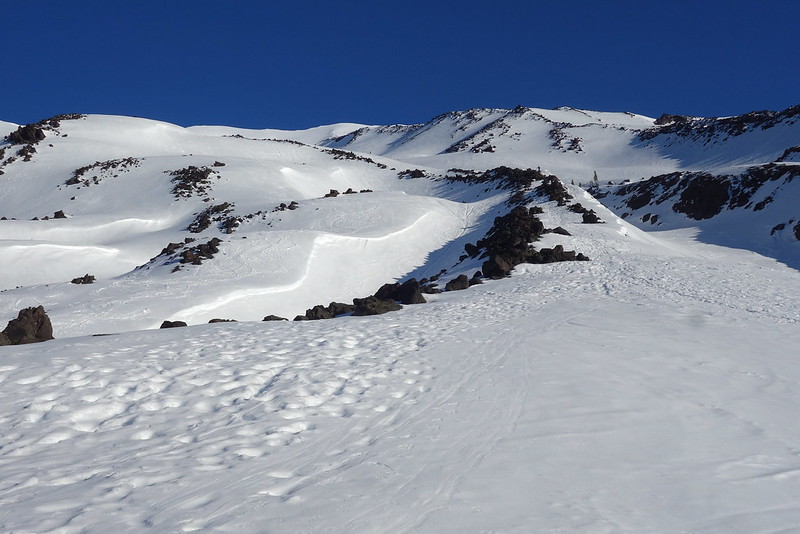 The going gets steep and I put on some foot traction. And some 90s techno.

Then something funny happens: it’s still easy. It takes attention, of course, and I’m breathing hard, but I’m not struggling. I feel like I’m almost flying. I pass the group of skiers from earlier, and think there must be something wrong, like in those dreams where gravity changes axes. 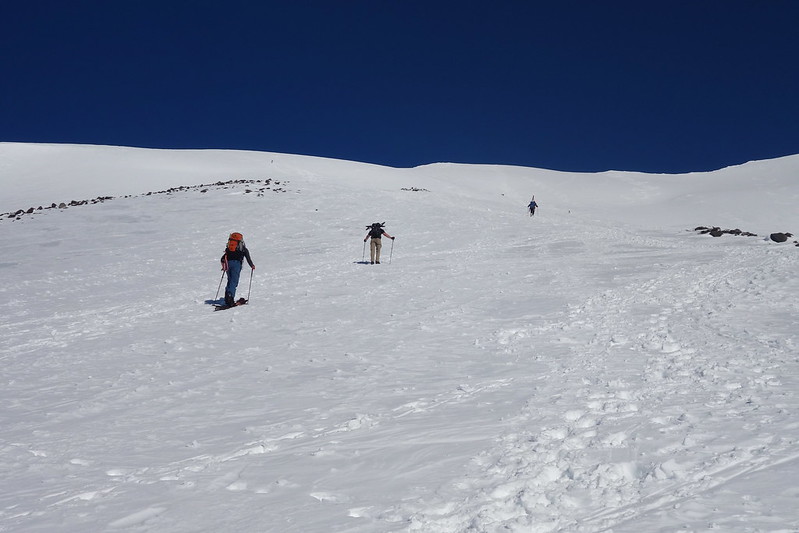 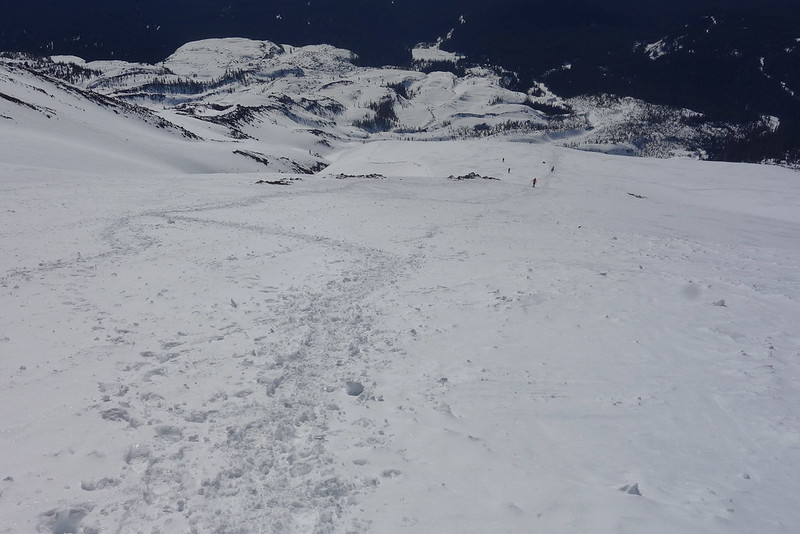 The last pitch is steeper than the rest, and I find myself kicking in steps. But soon enough I’m on top, with the bizarre collegiate feeling of having just woken up somewhere unexpected. 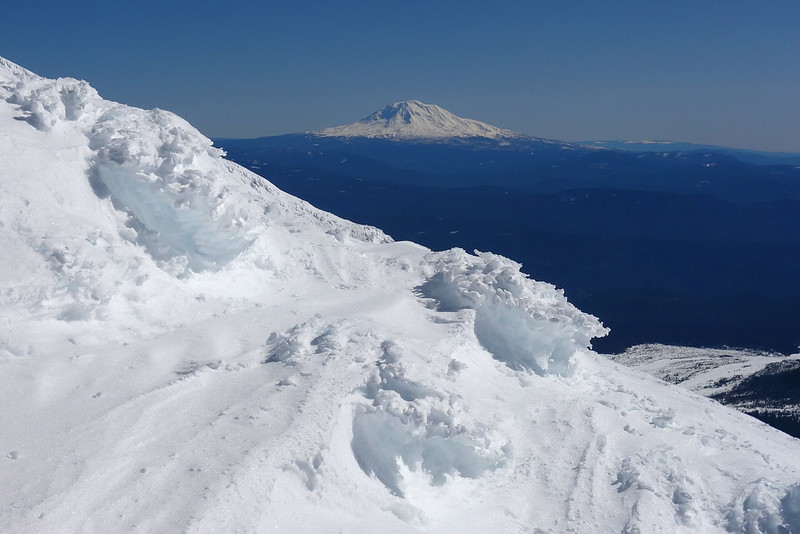 There are only a few parties up top, one of which is a single guy about my age taking selfies at a furious rate. Between (roughly) Selfies 391 and 392, he looks up to say hello. Turns out he’s on a west coast road trip, training to climb Rainier. “Isn’t this…” he waves his hand vaguely toward Mt. Adams and stops talking. I smile. “It is.”

“Hey!” he looks like he’s just had an idea. “Would you mind taking a quick snap of me?” Of course I don’t mind. I take three to add to his collection and hand him the phone. He smiles while flipping through. “This is the first mountain I’ve ever climbed.” 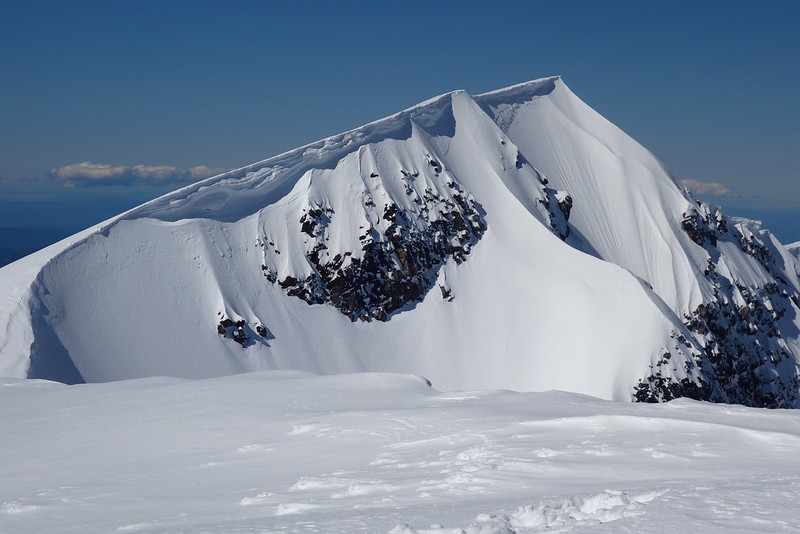 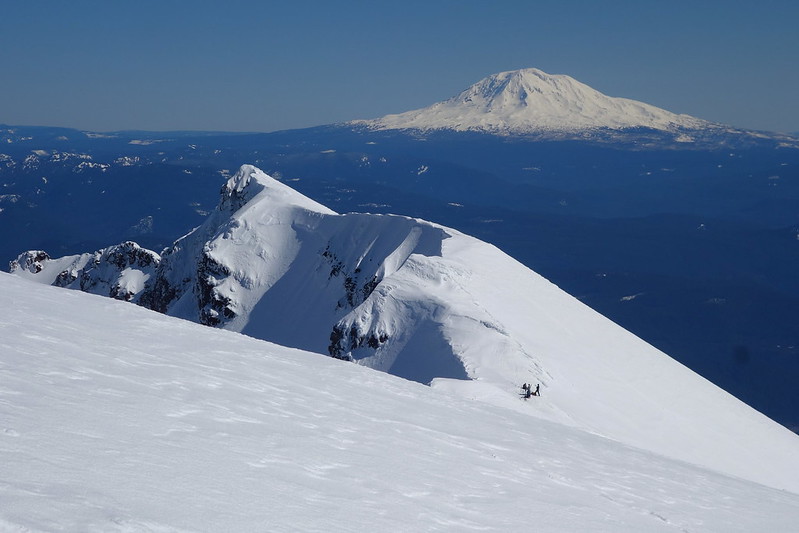 I eat an early lunch on the rim, then start on the best glissade of my life: something like three thousand feet down, with only little bits of walking to switch from shoot to shoot. I start laughing halfway and can’t stop. Is this a normal thing? I don’t remember ever laughing like this by myself. 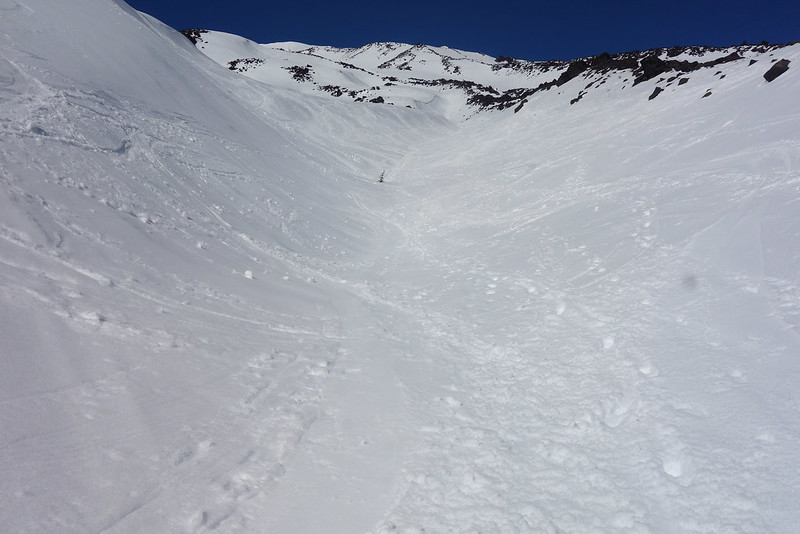 I skid to halt near treeline, then have the most lovely walk down to the car in the still early-afternoon light.

On the way home, I have some car trouble, and end up spending a few hours in Cougar waiting for a tow. I’m sitting outside on the main drag watching the sun start to set over the foothills when a crouched down old man stops to say hello. “You climb today?” I tell him that I did, pleasantly surprised for the conversation. “I climbed once,” he pauses and looks up at the colors changing in the sky, “in 1966.”

“Oh wow, you saw it all before the eruption!” He smiles. “Yep, it was a while ago.” Another pause. “I kept meaning to go back, but, well, things kept getting in the way.” I feel like I see sadness in his eyes but can’t say for sure. “Spent a lot of time in those hills though. I was a timber man…” He trails off, then sees the friend he’s apparently been waiting for—another crouched down old man. The friend says an old-fashioned hello to me, then they walk away together, into the only restaurant in town.

Driving back home, the tow truck driver tells me about all the calls he’s had up near the mountain, about seeing the north side last summer for the first time. He had a call near Johnston Ridge. “It was amazing! I kept wanting to look back and see the mountain, but you know, I had this rig, and I had to keep driving…”

It occurs to me that this man has lived near here for years, and never had the time to just spend a day rambling around.

He drops me and the car off at a mechanic a few blocks from home, and I walk back, watching traffic pass. I think about how easy the climb was today, and the weird pride-type-thing I feel about it.

I think pride’s not the right word, because I don’t feel proud exactly. I feel a fullness. Fulfilled. I think it’s the fullness of this ridiculously lucky life I get to live: the luck of having a body that can do this stuff, to be sure, but more importantly, having the luck of a life that’s shaped this way.