Our last day in the park.

It feels melancholy to go, but that sadness is tinged with wonder as we drive south in light rain. The water’s enough to reanimate the Amargosa River, which flows—unsteadily, often more like a puddle than river—beside the road. 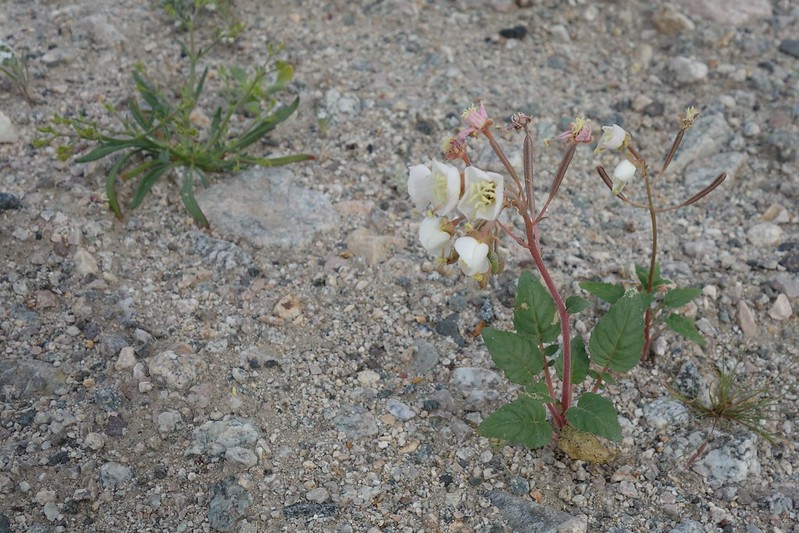 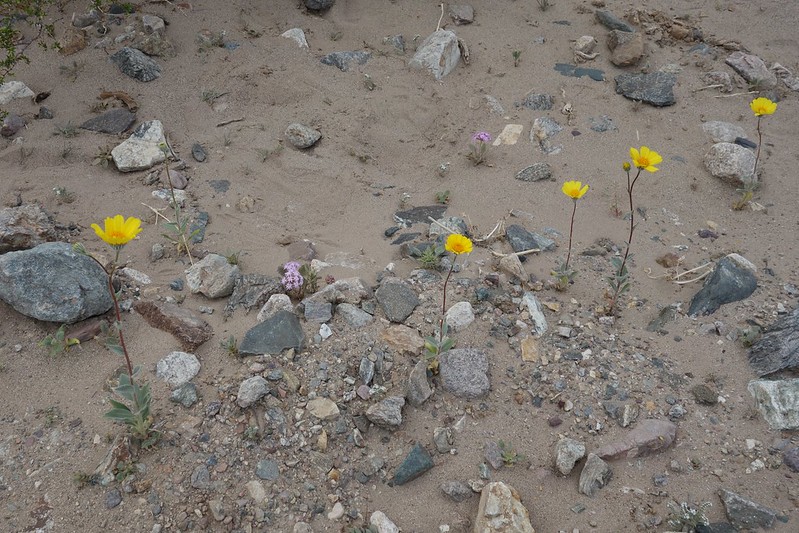 We leave the Park at Jubilee Pass, just past the old Ashford Mill ruins, then drop down to the Nevada line. 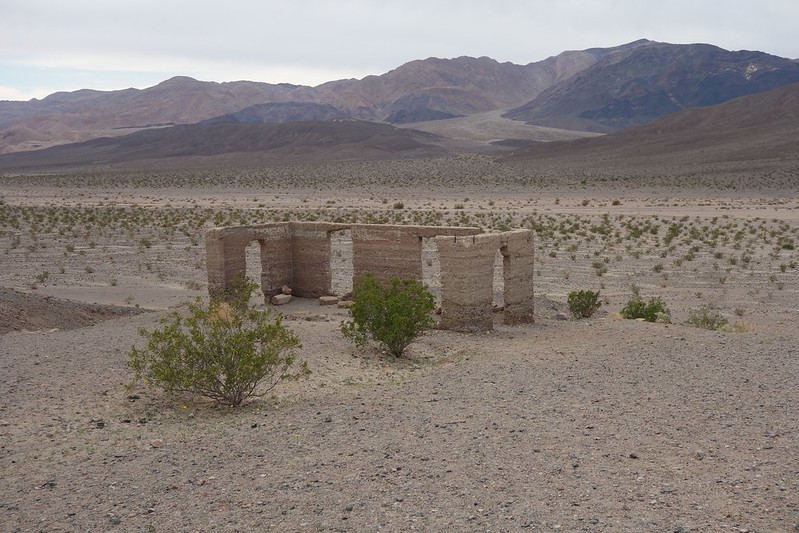 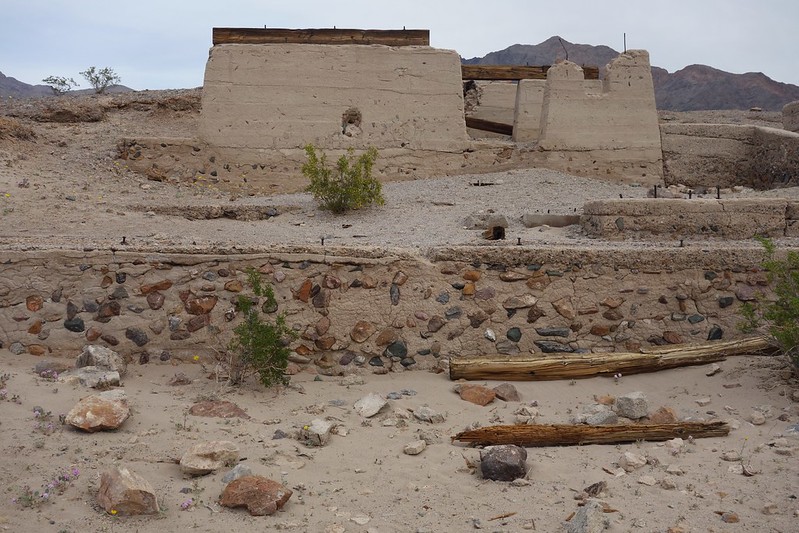 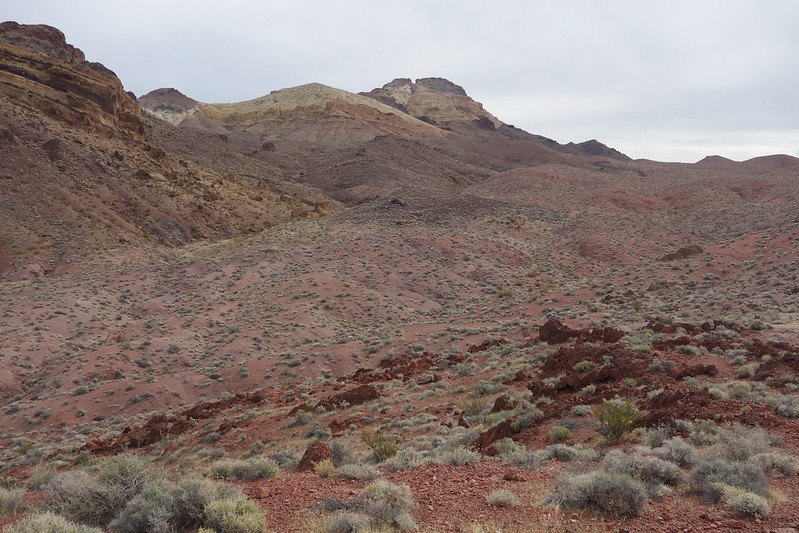 We spend the rest of the day touristing. First south to the China Ranch Date Farm and the edge of the Kingston Range Wilderness.

A railroad used to run through the canyon here, along the edge the Amargosa River—here more reliable than in Death Valley.

We follow the railroad rise to Acme, another abandoned town. There’s a bedspring outside what once was the saloon, and a car surrounded by hundred-year-old cans. 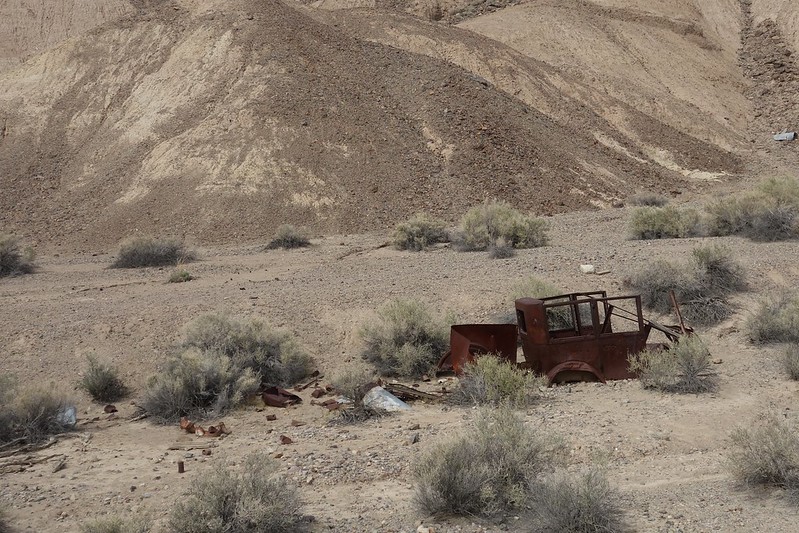 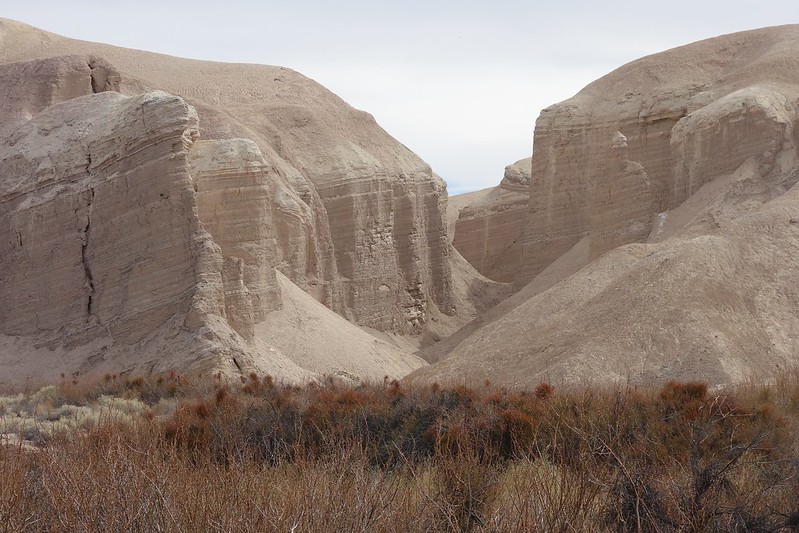 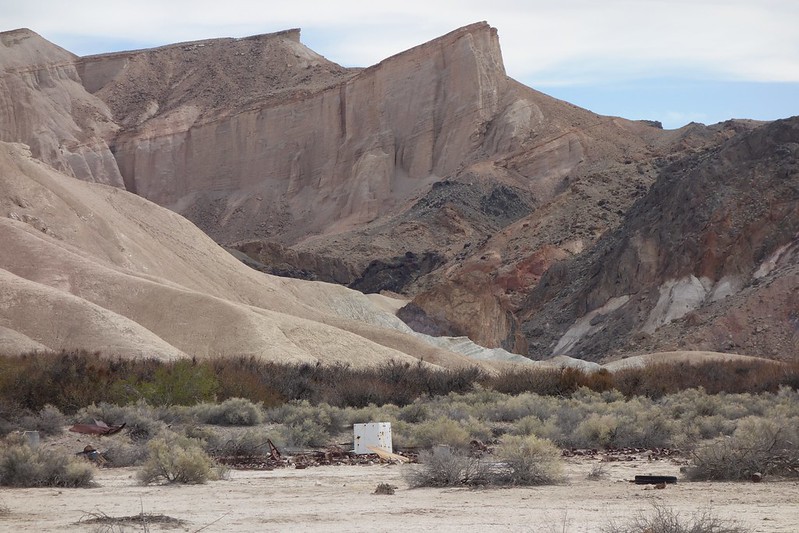 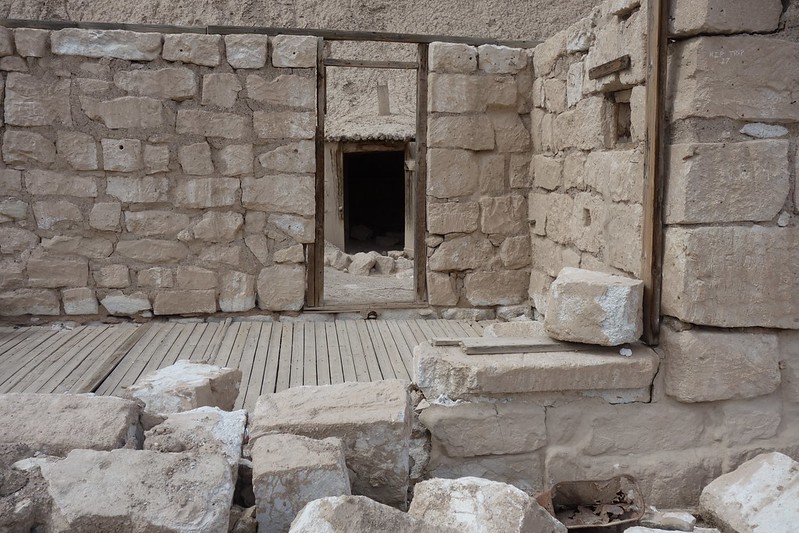 The Kingston Wilderness covers a quarter million acres of transitional zone between the Great Basin and Mojave Desert. It calls to us, as these things always do. There are basically no trails, just miles of ridges and canyons and reclaimed roads. 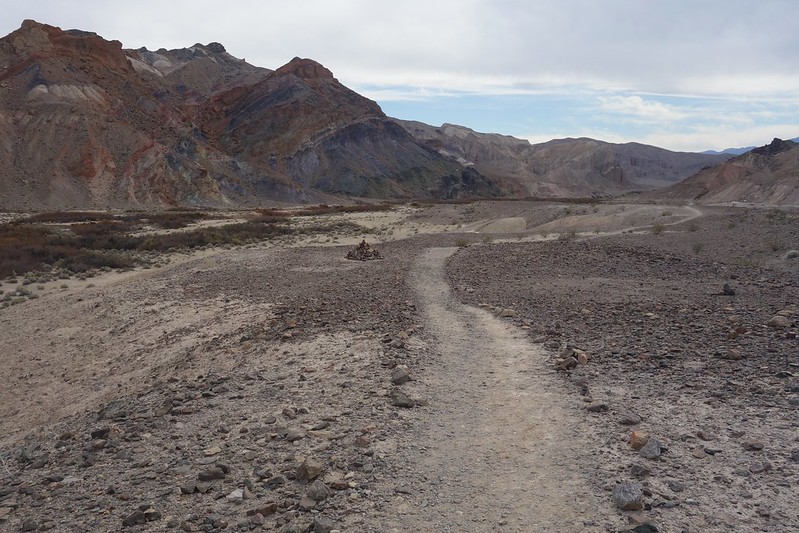 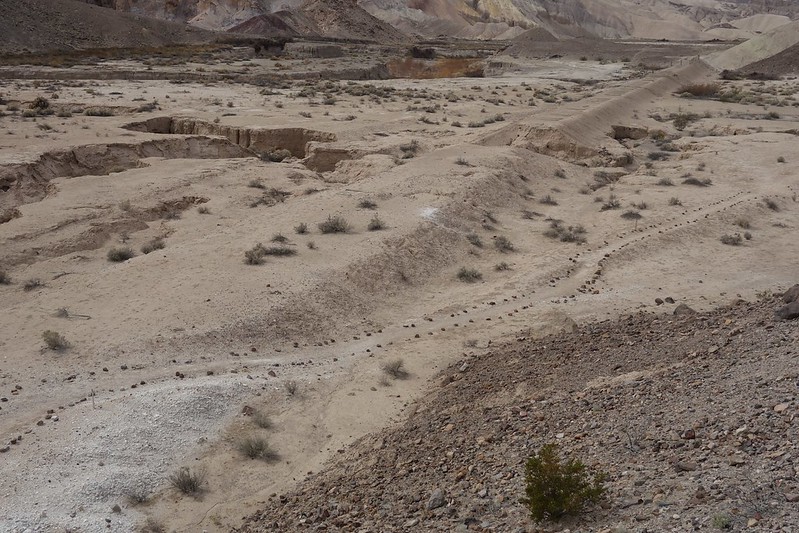 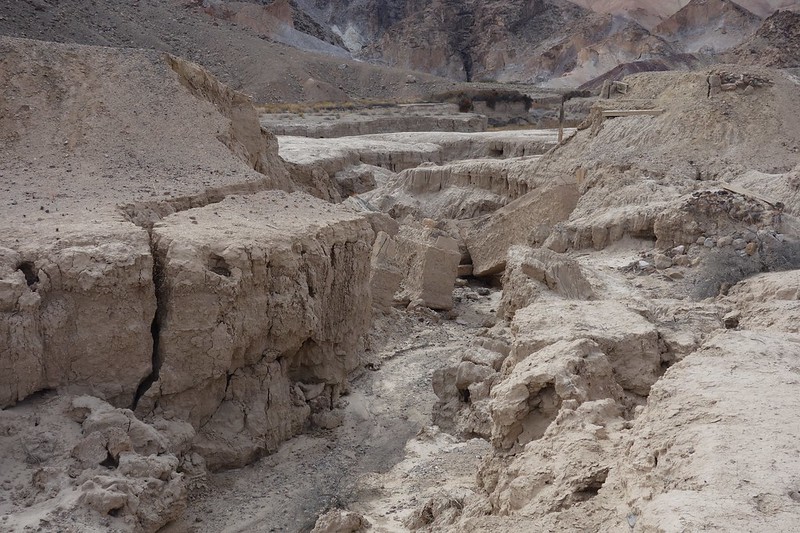 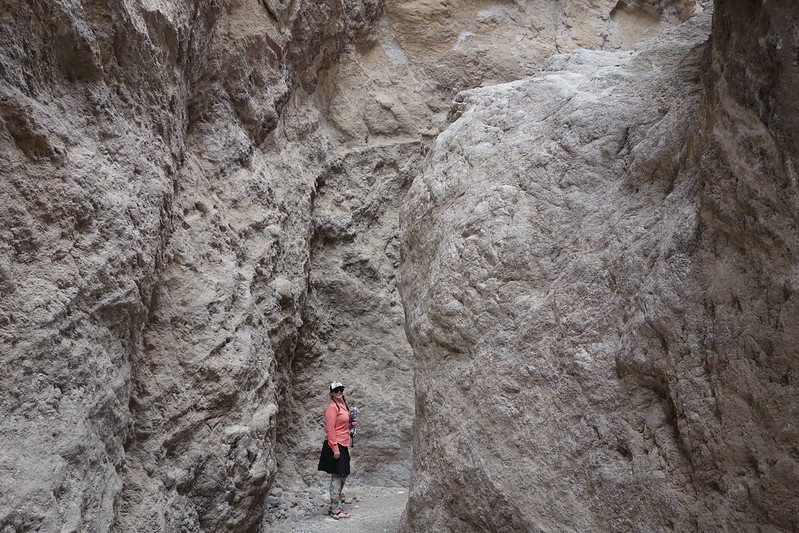 Further north, just off the interstate, we pull into a maze of rough, muddy roads—the Ash Meadows National Wildlife Refuge.

It’s an unlikely paradise. There’s nothing but dry desert for dozens of miles in any direction, and no pomp to indicate anything extraordinary. But here and there, cold, clean water flows from underwater springs to deep blue pools—the same blue pools that have been watered by ancient aquifers here continuously for thousands of years. Birds fly in from hundreds of miles, just as they have for millennia. And pupfish—out friends from Salt Creek—find shelter from the desert heat that’s come since their ocean’s gone. 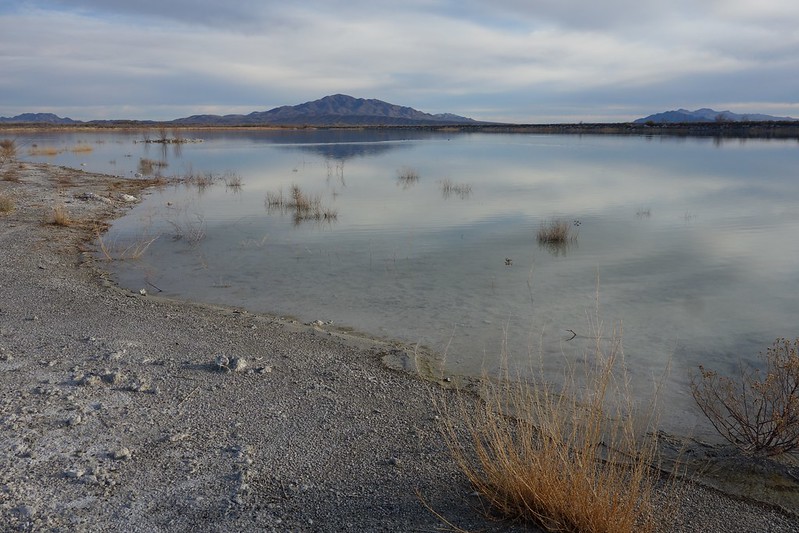 And it’s unlikely too in its human history. Before European settlement, the land was occupied by the Newe and Nuwuvi peoples, who had shared it for centuries with the birds and fish. But the unceasing tide of European settlers in the mid nineteenth century flooded the meadows and pushed out their traditional inhabitants.

By the 1960s, marshes in the northwest corner of the Refuge had been drained to make way for mines, and the nearby springs reshaped into underground aqueducts to water new crops of alfalfa and corn. It looked like, as with so much else out here, destined to be destroyed.

But then two things happened. First, a Supreme Court case granted the Park Service plenary authority over water in the area, so that it might protect endemic pupfish. This effectively cleared the refuge of farming and made mining prohibitively expensive.

But then a new threat emerged: as agriculture receded, a 50,000 person settlement was planned, complete with an artificial lake. The developers touted the wisdom of bringing people to water, rather than water to people.

Then the second thing happened. Knowing that the settlement would constitute a final destruction of the land, environmental and tribal groups—including the Newe and Nuwuvi, the land’s original protectors—filed suit. The fight took nearly half a decade, but in 1984 The Nature Conservancy took possession of the land (and its water rights), with the understanding that it would be given to the U.S. Fish and Wildlife Service to be managed as a refuge for the birds and fish.

We spend an hour on boardwalks above the alkaline springs, listening to the sound of birds’ wings in wind and watching fish dart twenty feet below the surface. 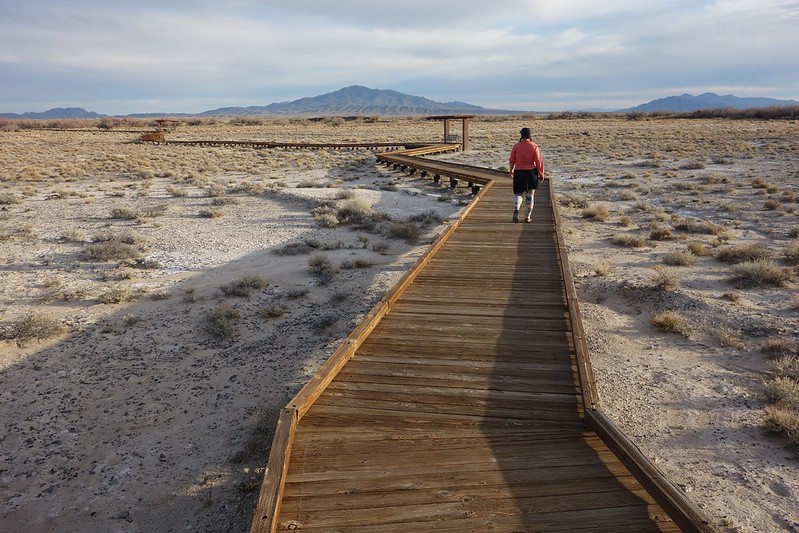 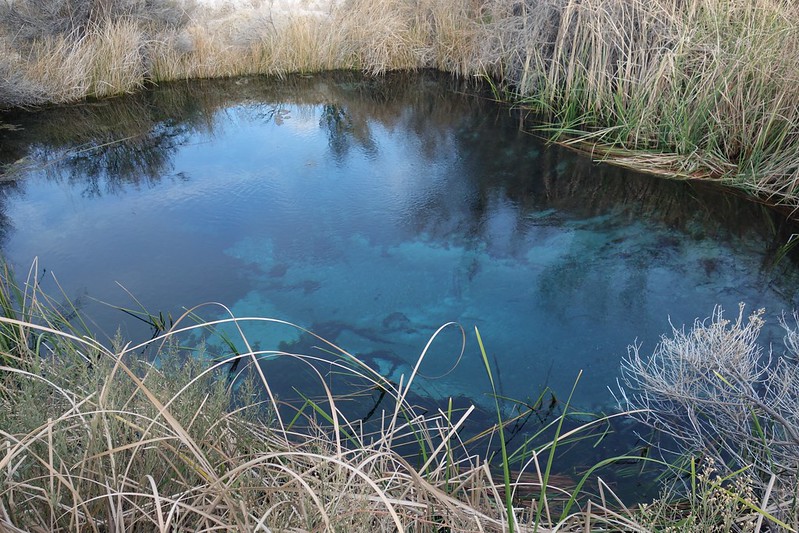 Until finally the sun begins to set on our final day down here, and we reluctantly retreat to our haunted hotel.

We’re staying the night in the Amargosa Opera House, its own extraordinary bit of human history.

In the early 20th century, those railroad tracks we walked on earlier ended here, dumping borax and lead for distribution further north and west. Company executives would come, and would-be investors. Ladies and gentlemen in gloves and white coats.

The mines died a few decades later, and during World War II the tracks that put this place on the map were torn up and sent to Europe and Asia. It all moldered until the late-60s, when Marta Becket, an aging ballerina, adopted the place as her own.

She began performing in the abandoned theater the next year, then remaking the place in her image—its rooms and halls festooned with faded pictures of bygone grandeur. She stayed for decades, fifty years, until she died here of old age in 2017.

When we check in, the attendants speak of Marta—always just by first name—with the awkward reverence we reserve for people who are dead but not yet history. They tell us more and less than we want to know: too much about her glamor, too little about what might drive a person to spend the latter half of their life building a monument to herself in the desert. The walls are covered in her exquisite, stilted paintings. The rooms are a desert mirage of an opulence that was already a half-century gone by the time she arrived.

There’s also though a strange hospitality here. The floors are weirdly lumpy. The plumbing makes scary noises—like gunshots, then unhappy elephants. Everything’s somehow simultaneously dusty and wet. They filmed a David Lynch movie here. But also… there’s a cat. She rolls over on her back as we pass, starts purring at the sound of another guest’s door unlocking.

There’s a show at the hotel—the musicians are in the parking lot drinking in someone’s flickering headlights—but we end up going out for dinner, up the road to a tiny Casino just this side of the Nevada line.

The place could fit in the lobby of a major hotel—a dozen slot machines, a single card table with faded, fraying felt—but it’s got a cozy restaurant where the waitress smiles at us like she’d been hoping we’d come.

We order jalapeno burgers and they’re worlds better than they need to be. A couple folks are laughing in Spanish in the kitchen.

Just as we’re finishing, a deep, laughing voice cuts through from a shallow long stage they’ve setup behind the bar. An attractive guy in his late-30s starts singing in a baritone two decades older than he is—a cappela at first, then backed by prefab tracks playing from a sort of high-tech karaoke machine on wheels packed into a luggage case.

He’s singing covers of old country songs to a crowd of a half-dozen senior citizens. They all seem to know him, all greet him the way the waitress greeted us—like he’s an old friend.

He returns the favor.

A cat’s apparently been sleeping unseen on the poker table, and it pokes its head up to see what the fuss is all about, then sashays over to sleep in one of the regulars’ laps.

We sneak over for a beer.

Then things get raucous. There’s a glass on the bar where you can drop your request, and one of the few newcomers—an elderly woman with seemingly limited mobility, here with her similarly situated husband—has requested Let’s Get it On.

The singer unbuttons the top of his shirt and approaches her like a nervous middle-schooler asking the popular girl to dance. Then he starts absolutely belting it out. He helps her up and they dance. She doesn’t move so well, but he makes her look beautiful, and her eyes get a little wet. Her husband rushes around with a two-decade old digital camera, taking pictures from every angle, smiling from ear to ear.

Everyone else is dead quiet. Except the cat, who’s purring loudly in a nearby lap.

We leave shortly thereafter, back to our strange little hotel. It’s quiet in the car. “That was…” A very long pause. “One of the most beautiful things I’ve ever seen.”

In the dark in the hotel’s strange creaky bed, listening to its creaking plumbing boom and thud, I get to thinking about the magic of hospitality.

We talk a lot about how to talk to strangers. And, when we do, we tend to talk about recognition—the importance of recognizing the value of the other, of other lives, of other forms of life. Of other cultures and other histories.

But one can’t begin with recognition. We can only recognize something as valuable once we’ve learned enough about it to judge it to be valuable. Recognition in this sense is the end of a complicated process of knowing and reasoning. It’s not something that can be offered to a stranger just in from the cold.

We can’t begin by recognizing the other. Instead, we must begin by welcoming them—by bringing them in; offering them some food, maybe a drink; offering to share life for a while.

Hospitality’s welcome is a promise: This can be your home. I will make it so. It doesn’t matter where you’ve come from or who you are. We can make this a place where you belong. I’ll sing you a song. The cat will sleep in your lap.

I fall asleep thinking of something from Arendt: “[I]f it is good to be recognized, it is better to be welcomed, precisely because this is something we can neither earn nor deserve.”

Sunrise the next morning we stop cold on the freeway, fifty miles north of Death Valley. There’s a coyote standing on the center line, just staring. Staring with that inscrutable smile.

Along the highway, there are improvised billboards painted on the sides of silos and barns. “Make America Great Again.” American flags outside of failing farms.

There’s this yearning here for another time—a time before the barn fell down, before things got hard. A time when this felt like home. That awkward reverence we reserve for things that are dead but not yet history.

That nostalgia scares me. No future was ever made by trying to bring back the past, especially a past like ours, so full of ghosts. So shot full of holes.

But there’s a real need here—a need for a new kind of world, a world that can feel like home again.

Krista puts on another old episode of Coast to Coast. They’re talking about aliens and energy, how the aliens have already worked out cold fusion. They want us to have it. They’re trying to tell us. We just have to listen carefully. Art Bell’s listening carefully, to all comers.

I think again of that singer last night—of nostalgia’s unanswerable yearning, and the future promised by welcome.

A few hundred miles closer to home, along a lonely finger of the old Pony Express, there’s a windstorm. Tumbleweeds the size of our car.

And we’re starting to get scratchy radio from Reno—our first outside news in a week. There’s a snow storm coming tomorrow, and something more too: the CDCs been warning people to prepare for local outbreaks of a new virus. The vice president’s just formed a task force to deal with it. There’s talk of borders closing.

3 thoughts on “Death Valley Before the Storm, 3: To Be Welcomed”