A week and a half and several years after Death Valley.

We thought about not coming, but decided that, with precautions—no stops, no socializing, straight here and straight back—it might be okay. And anyway, we think but can’t quite yet say, this is probably the last time we’ll get to travel for a while.

We wake up together. Krista rushes off for work, and I rush up on I90 toward the Middle Fork Snoqualmie River. I stop for coffee on the way out of town. The barista looks like he’s been crying.

The parking lot for Mailbox is empty and mostly frozen, and the trail’s nearly all ice until the sun rises over Snoqualmie Pass and melts it immediately to steam.

The first four miles of the trail are basically all switchbacks, and I feel weirdly exhausted. A woman in running shorts and a big puffy coat jogs jauntily by, then turns back. Apropos nothing: “At least the summit beers will be cold!” Huh?

Snow starts a couple thousand feet from the top—just a gentle dust at first, then a foot of thin powder that floats into a swirling dust with each step. 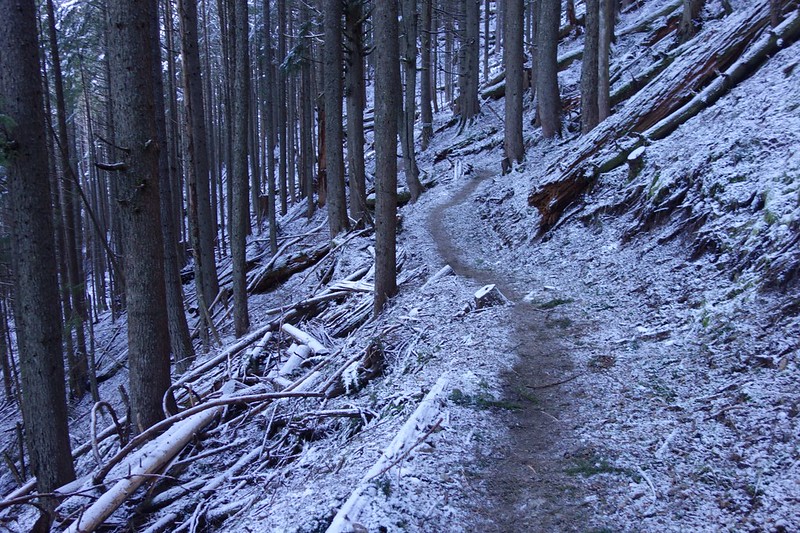 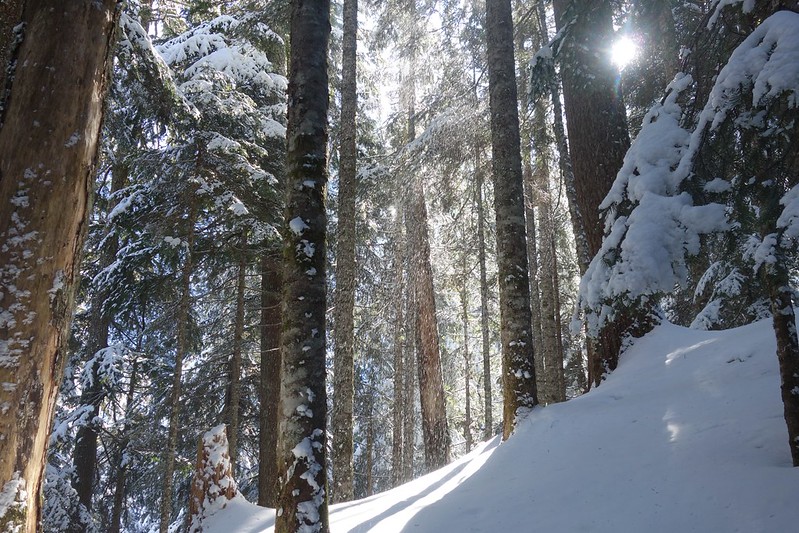 I stop for fifteen minutes, trying and failing to make a snowball to throw at a tree.

Things open up around 4000’, and get steep—a thousand more feet in the last half mile. 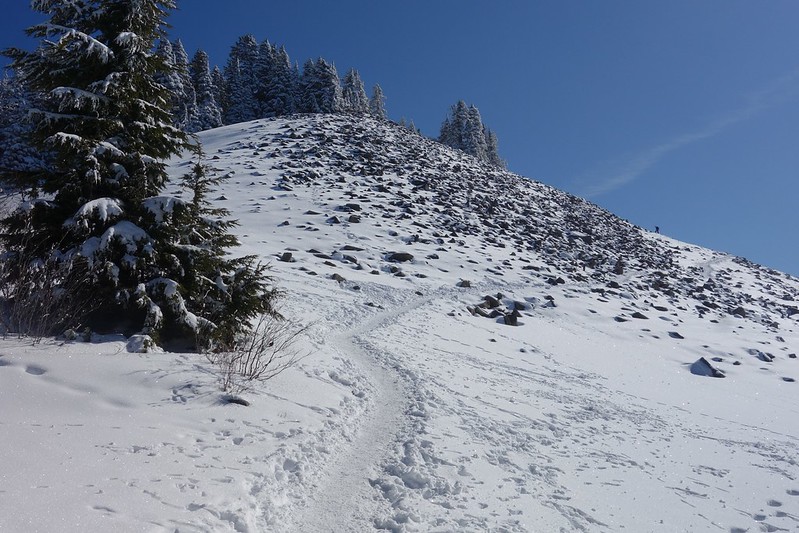 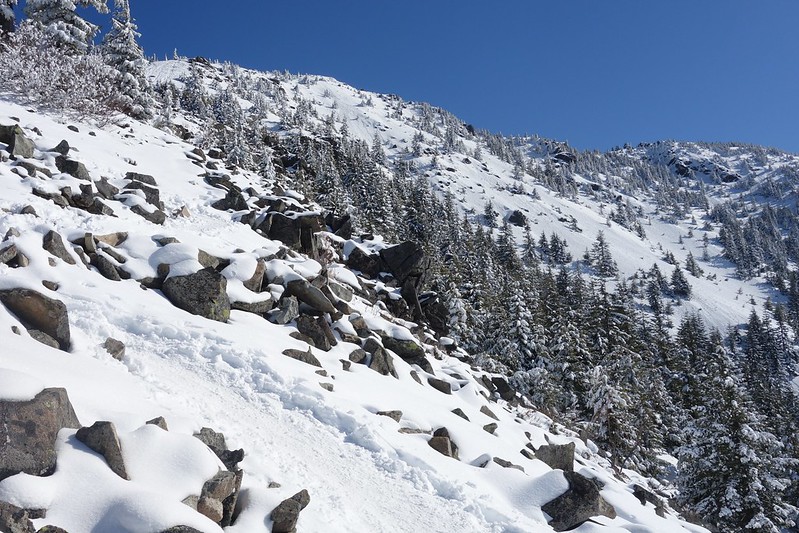 I find myself breaking what I sort of think of as the prime directive out here: I’m going up something I’m going to be scared going down. Oh well though. It’ll probably be less sketchy after a little more time in the sun? 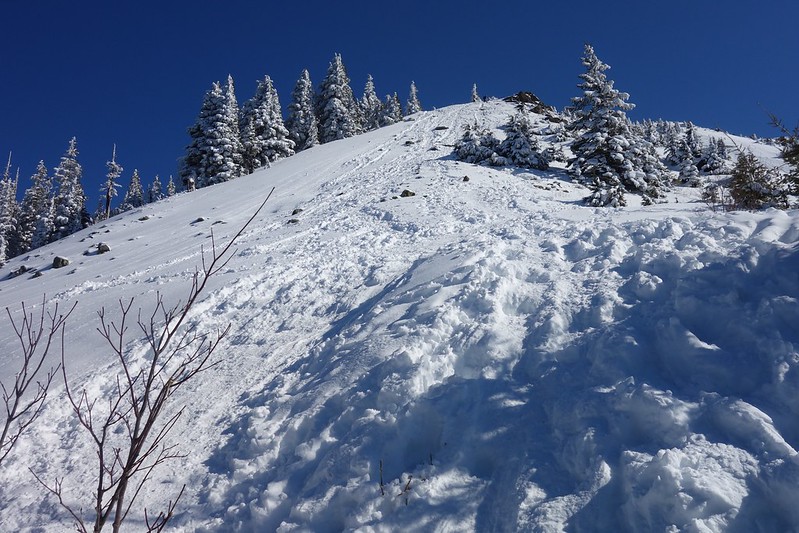 In the last, steepest stretch, I see my short-shorted friend from earlier, literally running down in her crampons. “I mailed you a letter up top!” I try to shout a bewildered “thank you” as she flies down the mountain. 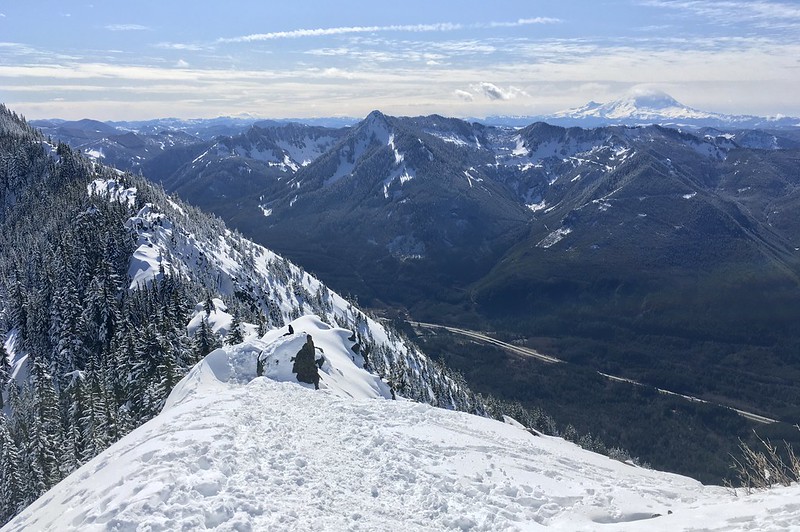 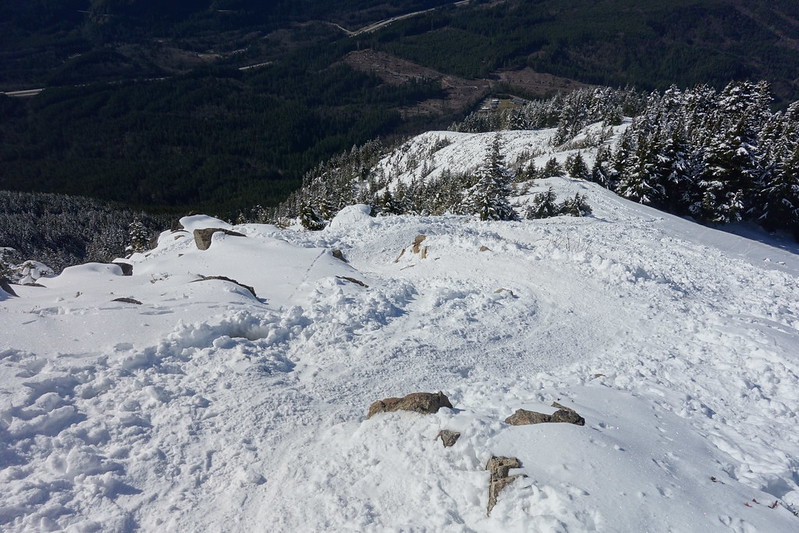 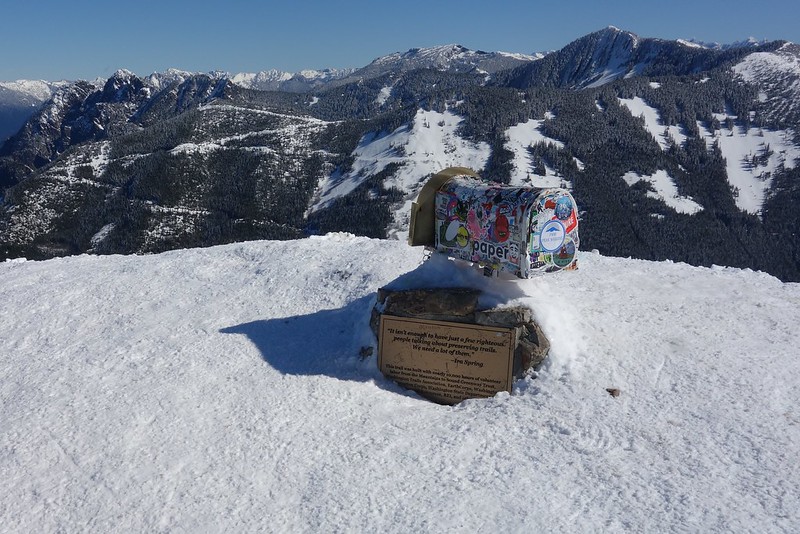 I open the titular mailbox up top and there’s… a four pack of beer. Very nice beer. I smile big and unintentionally, in that way that kinda hurts the tops of your cheeks. I wonder if she comes up here a lot, just to drop off “letters” from huffers like me.

I sit on top for a while, nursing a beer and dreading the way down. To the north and east lie the Alpine Lakes Wilderness. I follow the Middle Fork’s vast valley up with my eyes as far as I can see, imagine a long walk there this summer—that is, if the world still exists this summer. I imagine all the lakes thawing for spring, new birds and hungry bears trundling down from the hills. Fawns still in their spots. Maybe I’ll go from the pass here to Stevens and back, maybe finally see Icicle Ridge without snow. 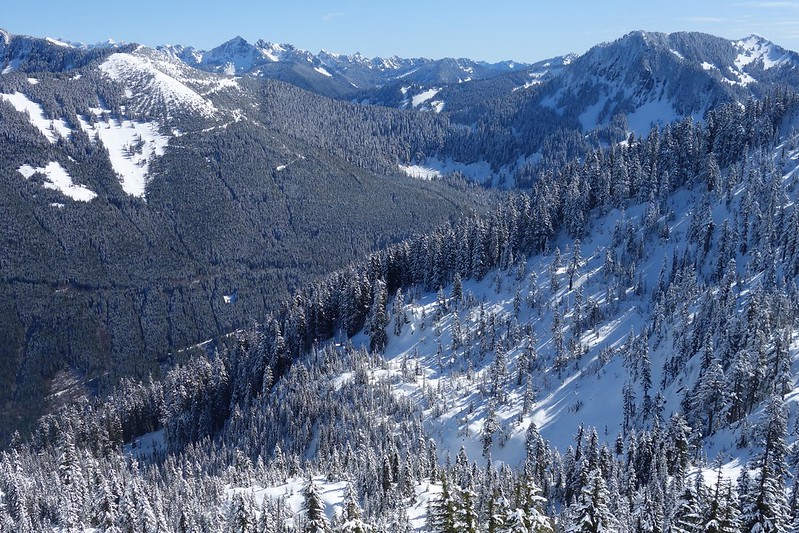 As I’m considering (and dreading) the trip down, a dozen well-prepared young women in crampons and duct taped slicks jog up the hill.

I tell them about the special delivery. “There’s beer in the box, but unfortunately only three.” One of the leaders smiles. “We brought our own!” They have: a half-rack of Rainier, and at least one bottle of scotch.

Turns out they’re a sort of unofficial alpine club from UWash, out to practice for Rainier this summer… “If this virus doesn’t take out the mountain.”

I’m ready to go, nervously adjusting my poles for the descent, but a woman in a bright pink and yellow headscarf with a thick Middle Eastern accent calls out: “Want another beer?” I tell her no, that I’m too scared to be any less sober. She looks surprised. “You’ll do great!” Then a beat. “I have two ice axes, would you like to borrow one?” Another beat to consider. “I could sterilize it!”

I don’t want to be an imposition, but I also don’t want to fall several hundred feet. “If it won’t be too much trouble!” She smiles. “Let’s trade: you take a picture of us, and you can borrow an axe for as long as you like.”

I take the picture. They all hold up their beers and scream happily.

I make it down the hill with the axe and without incident. My friend’s waiting. “It was just a confidence trinket!” I had it back and she shakes my hand, all old-fashioned. She’s the last stranger I’ll touch this year.

Wilderness is magic when it’s open to everyone. 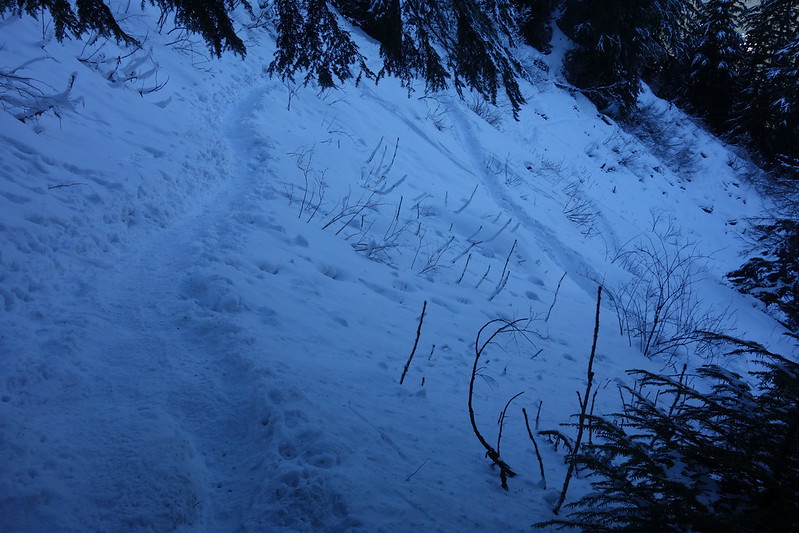 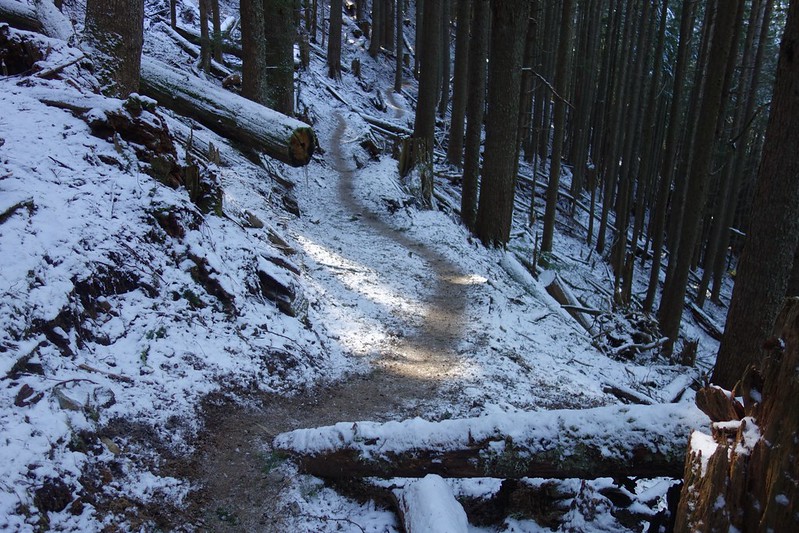 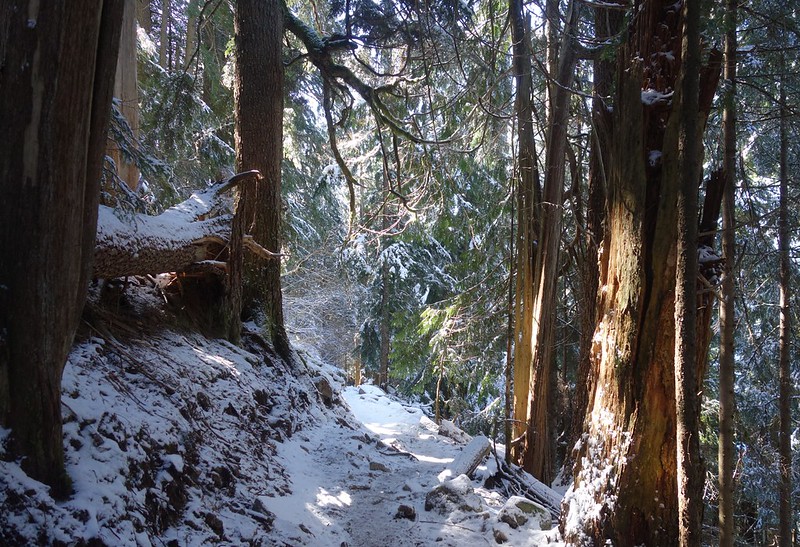 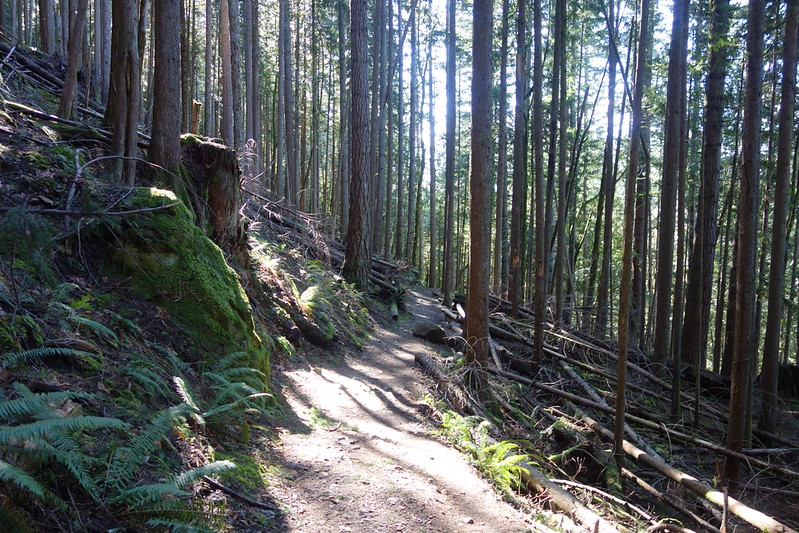