A couple weeks ago, just as we were all realizing Covid was here for the long-haul, Krista stood above our bed as I was still sleeping. “They’ve put me on furlough.” It took me a few seconds to understand.

My situation had suddenly become less secure too, and we spent that morning trying to make a map of the next few months, writing panicked emails and doing panicked calculations. My dad said we could move into his place if need be, that there’s a little money if we need help in the meantime. We worked out unemployment benefits and a budget, checked in on our savings. Kept checking in on each other.

That evening we drove to her work to pick up a few things—a small plant, her favorite mug—then drove blankly around town, visiting special places. The whole city suddenly felt less permanent, or at least less secure. Like the whole thing might just be taken away. “I just…”

We’ve been walking around our block every night, through the partially closed park and the gated tennis court. I made myself a promise that, if we get to stay, I’ll never take any of it for granted again. 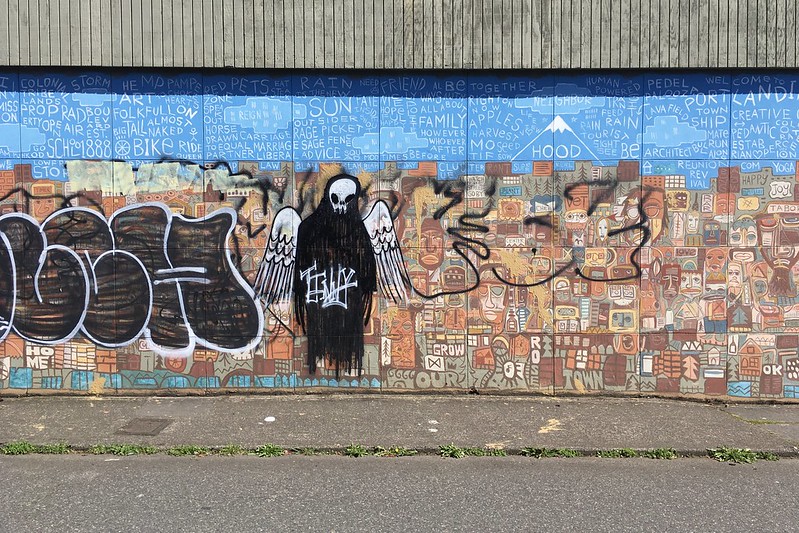 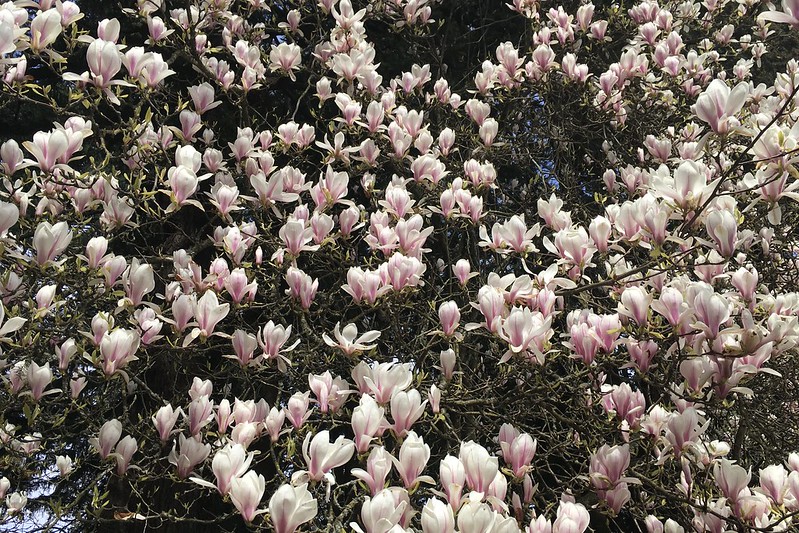 Today I leave early, heading as far north and east as I can. I end up on the bike path that follows I205 from Oregon City to Vancouver.

For years, there have been complaints about this path: too many homeless folks live here; it doesn’t feel safe; there’s garbage and furniture, stuffed animals with busted seams, people’s whole lives moldering in the winter rain.

I walk past Mt. Tabor’s posh homes through a dozen blocks of increasingly desperate apartments to the tarp-lined freeway trail.

Just north of Division, a man and woman sit side-by-side in a tiny strip of shaded grass, sharing something brown from an old Slurpee cup. I tilt my head hello, and the woman giggles. She slurs “Good day!” all old-fashioned. I say the same back to her.

On the east side of the freeway, there’s a yard full of rusted-out trucks. But also goats and rabbits and docile dogs. A sort of urban farm. A small pygmy goat pushes its head through the fence, lets me scratch its nose. 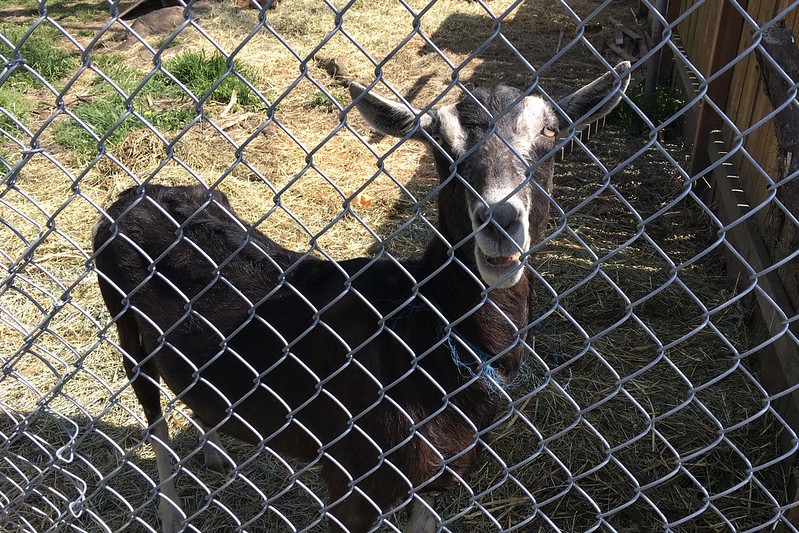 I think of all the colors that are still here.

In the complex set of over- and under-passes where 84 meets 205, there’s a beautiful woman about my age asleep in the shade with her dog. It’s snuggled up against her, like a baby. And beside it are a half-dozen gnarled old toys, a slug and a squirrel and a bowl with faded letters, half-full of kibbles.

I’m embarrassed to admit it, but I don’t think I’ve ever thought before of the toys of unhoused pets.

I don’t want to stare, but I do, thinking of our cats. Thinking of what it would be for us all to be out in the street. What would we bring, if we could only keep what we’d carry? Bebe’s knobbly brush, the one she cuddles like an old friend. Nemo’s frog, the one that was with him in the Petco the day we adopted him. A few things for Krista and me.

There’s an old line about fear and politics: when we’ve lost the idea of a common good, fear can be mobilized to orient us against a pressing threat—real, or more often imagined—that replaces the pursuit of justice.

It’s that sort of fear that, when I was a kid, drove our country into endless wars in the Middle East, drove us to the look the other way at torture and indefinite detention.

Fear in that sense can orient us toward our own protection and away from justice. And it can orient us away from each other. There’s a sort of primal solipsism about it—a pressing anxiety that draws us inward, away from others and the world. Nussbaum describes it beautifully:

To experience other emotions, such as compassion, you need a sophisticated set of thoughts: that someone else is suffering, that the suffering is bad, that it would be good for it to be relieved. But to have fear, all you need is an awareness of danger looming. The thoughts involved don’t require language, only perception and some vague sense of one’s own good or ill.

Fear is not just primitive; it is also asocial. When we feel compassion, we are turned outward: we think of what is happening to others and what is causing it. But you don’t need society to have fear; you need only yourself and a threatening world. Indeed, fear is intensely narcissistic. An infant’s fear is entirely focused on its own body. Even when, later on, we become capable of concern for others, fear often drives that concern away, returning us to infantile solipsism.

Watching that fear drive people from decency and to flag-waving furor, in college I came to think of fear as the enemy justice. But walking past the beautiful woman and her dog, I wonder if, in our common fear, there might be another possibility—a possibility grounded in seeing in our shared vulnerability a vision of ourselves in the other, grounded in viewing their tragedies as our tragedies, and their salvation as ours.

Fear here may be an occasion for compassion, not a competitor with it.

I think here of something Judith Butler wrote about America at the same time the wrong sort of fear was leading us to war:

Most Americans have probably experienced something like the loss of their First Worldism as a result of the events of September 11 and its aftermath. What kind of loss is this? It is the loss of the prerogative, only and always, to be the one who transgresses the sovereign boundaries of other states, but never to be in the position of having one’s own boundaries transgressed. The United States was supposed to be the place that could not be attacked, where life was safe from violence initiated from abroad, where the only violence we knew was the kind that we inflicted on ourselves. The violence that we inflict on others is only—and always—selectively brought into public view. We now see that the national border was more permeable than we thought… I condemn on several ethical bases the violence done against the United States and do not see it as ‘just punishment’ for prior sins. At the same time, I consider our recent trauma to be an opportunity for a reconsideration of United States hubris and the importance of establishing more radically egalitarian international ties. Doing this involves a certain ‘loss’ for the country as a whole: the notion of the world itself as a sovereign entitlement of the United States must be given up, lost, and mourned, as narcissistic and grandiose fantasies must be lost and mourned. From the subsequent experience of loss and fragility, however, the possibility of making different kinds of ties emerges. Such mourning might (or could) effect a transformation in our sense of international ties that would crucially rearticulate the possibility of democratic political culture here and elsewhere.

I wonder if there’s a similar possibility now, a possibility born of the sudden realization that we too may end up camped on the side of the freeway, sleeping in the midday sun. 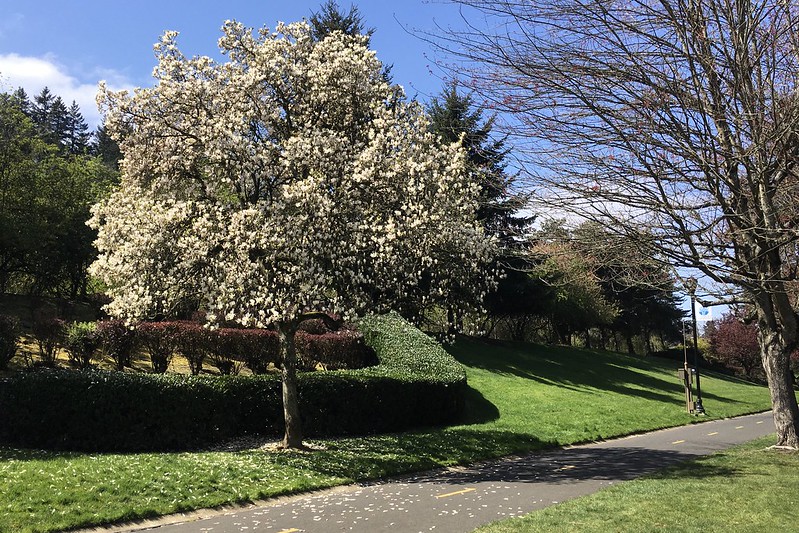 There’s an ancient church on the long walk home, dug into the walls of Rocky Butte. The main buildings are closed, and the gates all around are locked. But someone—I like to imagine an ordinary parishioner, moved by the spirit of it all—has put big boxes of shelf-stable food all along the fence.

I imagine that beautiful woman from earlier, and her dog. I imagine them in a place where the last really are first. 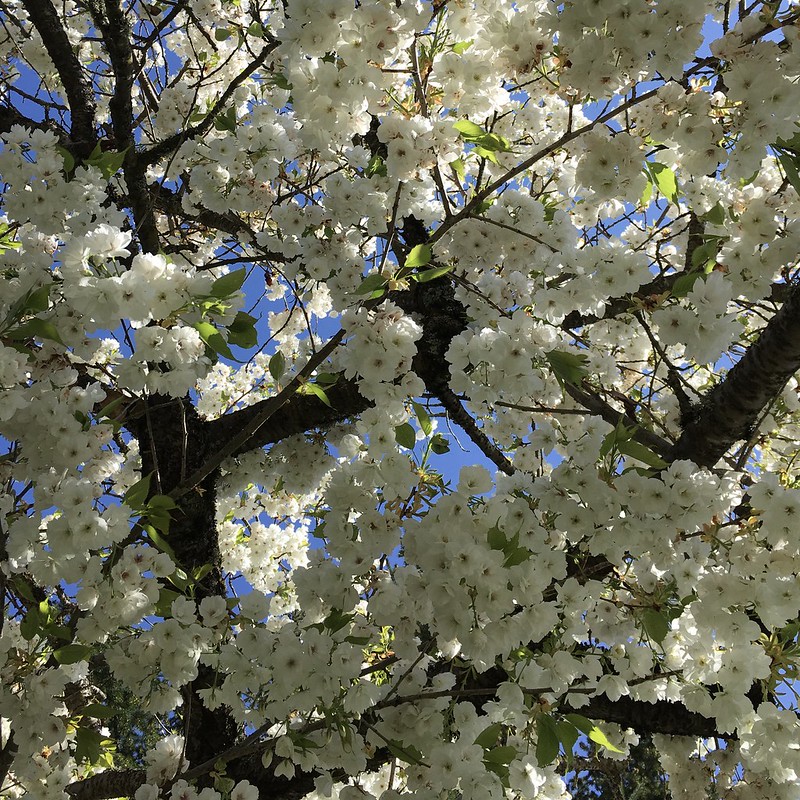 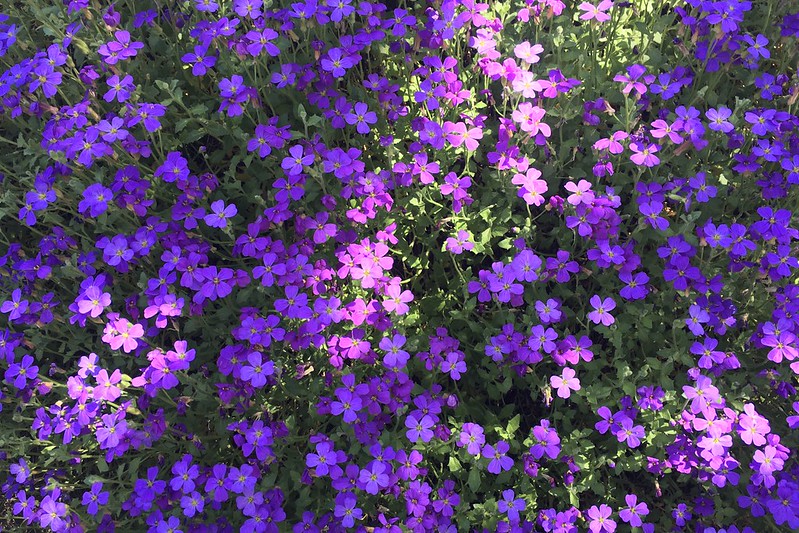 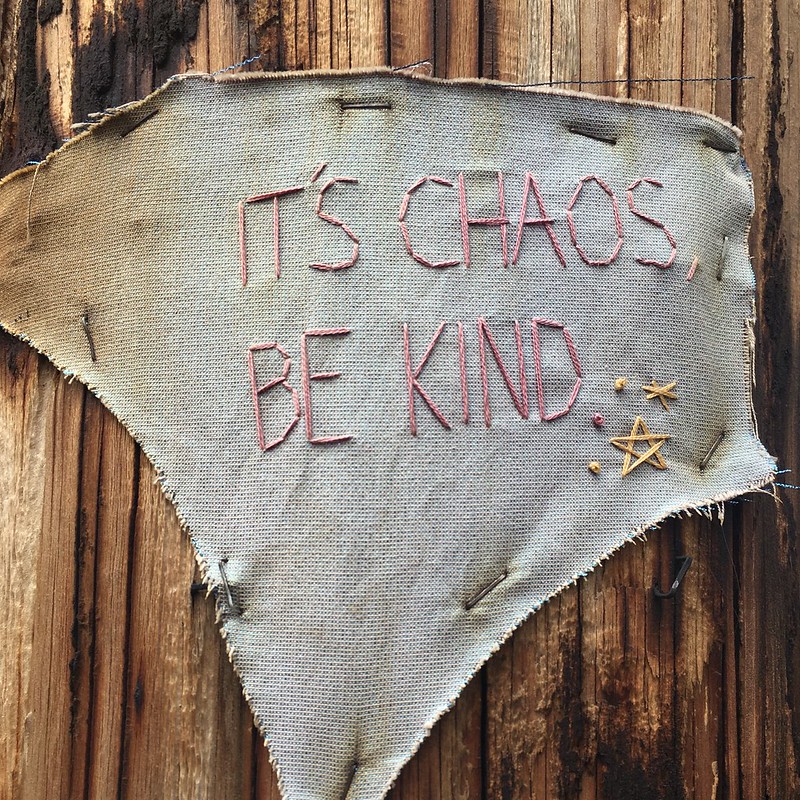 One thought on “Walking Through the Dark, 3: The Community of Fear, April 7”