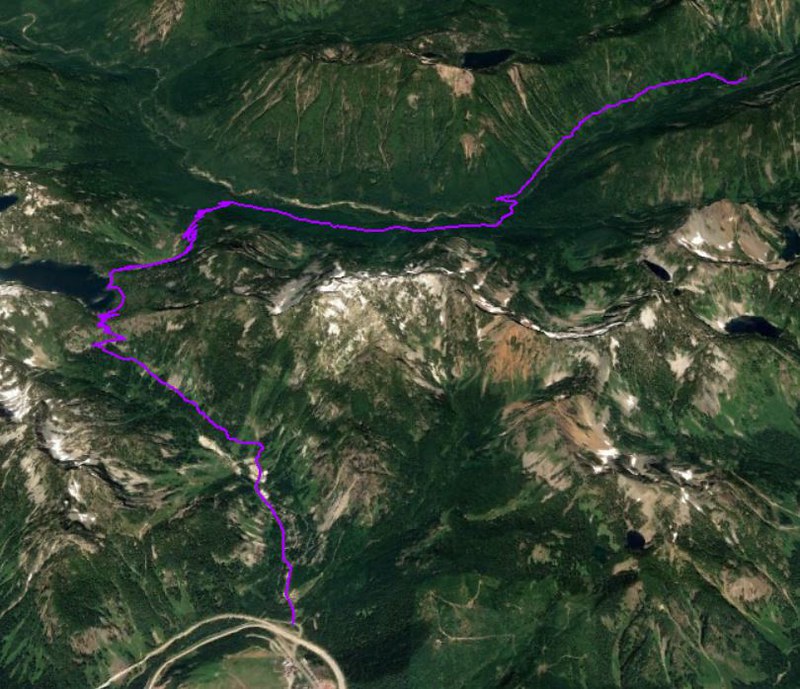 I head out early to beat the heat, walk west through sunrise past fake Swiss chalets to the trailhead for Snow Lakes.

It’s still early but the mall-sized lot’s already half full. The trail’s much the same: shirtless college kids with Bluetooth speakers and plastic bottles of water; elderly couples with binoculars and enormous daypacks; families speaking Spanish or French or Mandarin, taking pictures every hundred feet.

For something so crowded, the tread’s surprisingly rough, full of rocks and avalanche tracks. A veiled woman in bright white running shoes helps her mom up a steep step. 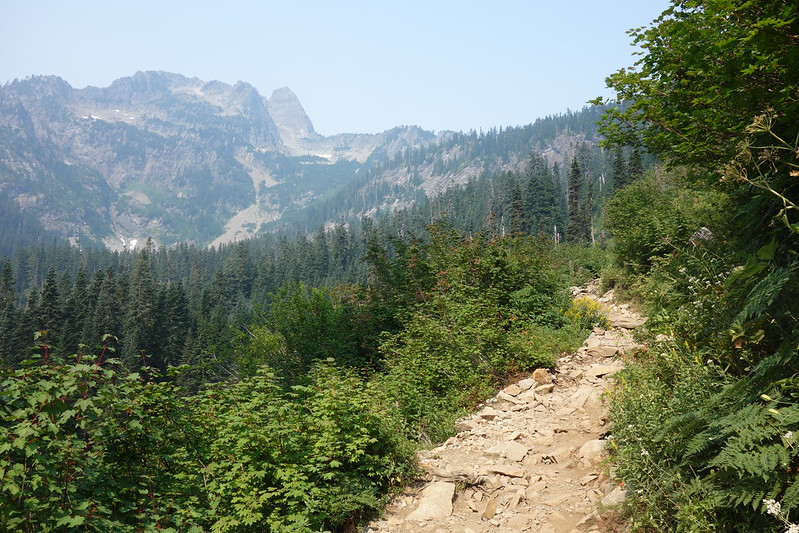 I used to hate places like this, used to speed through as quick as I could. But I stop for a while and eat a Snickers, watch three different dudes jump into the water then instantly regret it.

What’s remarkable to me is how much this seems to mean to so many of the folks here. I can get jaded. To me this just feels like an over-loved lake—an echo of old grandeur, at best a promise of the wild that lies beyond—but everyone else seems astounded. A group of girls in sorority shirts next to me have taken more pictures in the last seven minutes than I took in the last seven days.

The longer I sit, the more I realize that they’ve got it right. 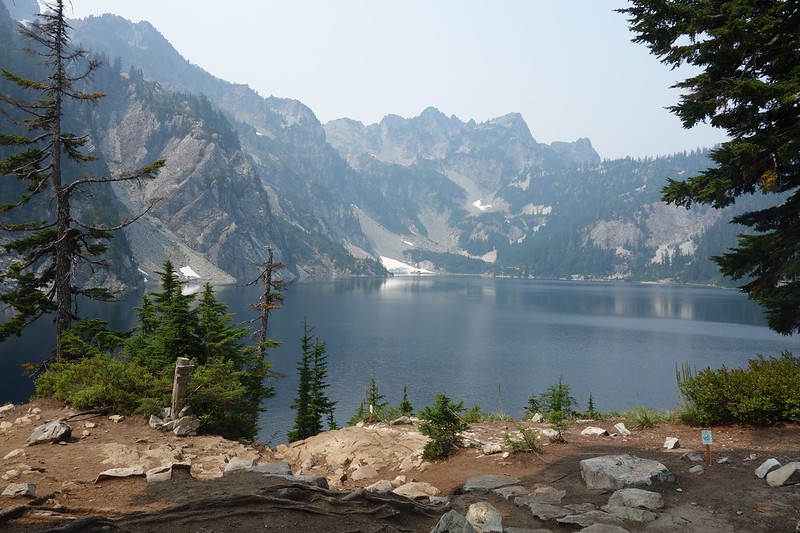 The tie trail down to the Middle Fork splits inconspicuously from the lake on the far northeast corner, and instantly things change. The tread shrinks from several feet to maybe six inches. It’s overgrown and eroded, faded and falling off the side of the mountain, more sharp rocks and devil’s club than dirt. It feels like a secret passageway to another, wilder world. 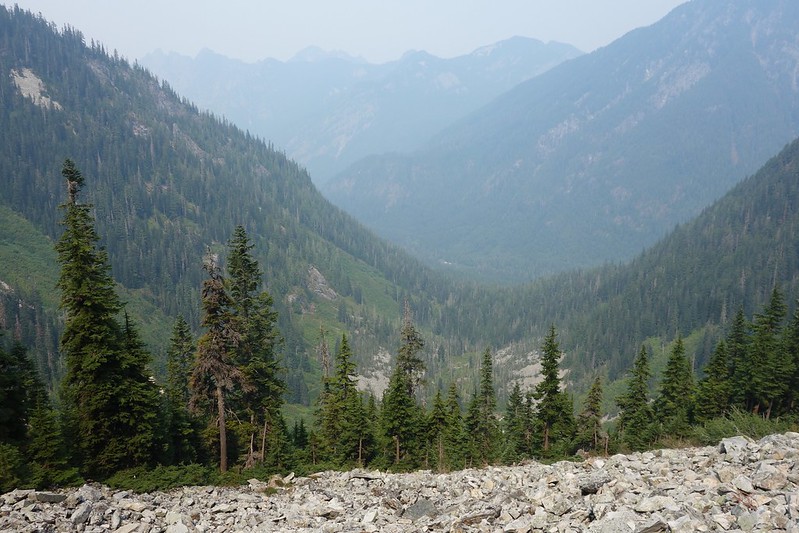 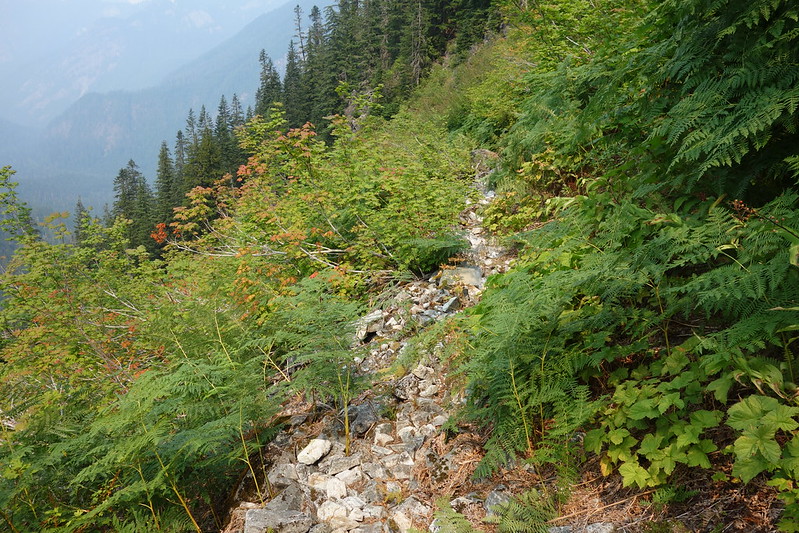 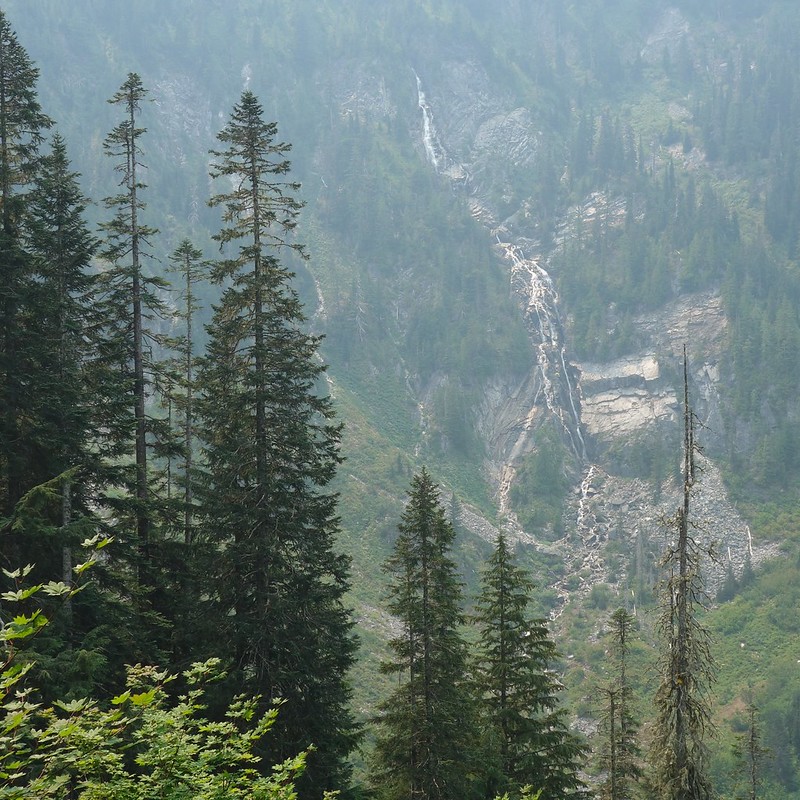 I was worried about this bit. Along with La Bohn Gap tomorrow, it’s one of the two places I’ve been worried might not be passable. It ends up tedious but not particularly troublesome. Some careful navigation’s necessary to stay even vaguely on trail. There’s an angry falcon that keeps squawking and dive-bombing me (!?). A few times I have to jump over small drainage gullies. But it’s more fun than frightening, albeit “fun” in a Type 2 sort of way. 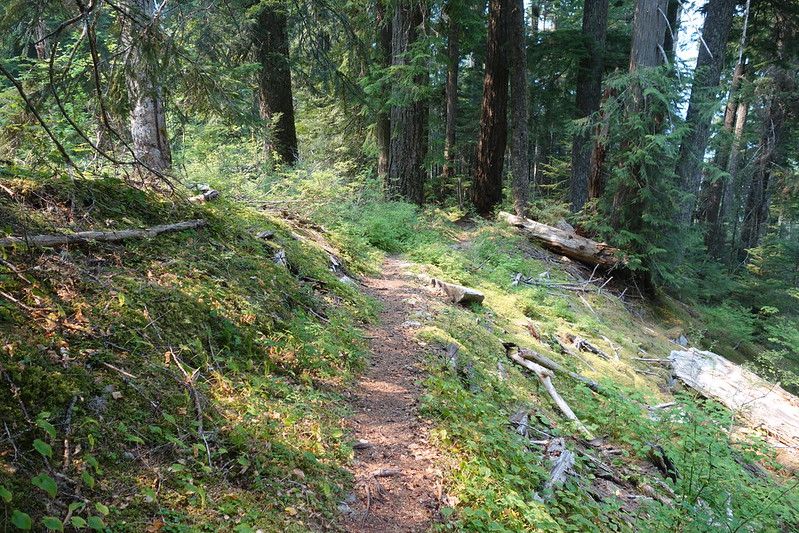 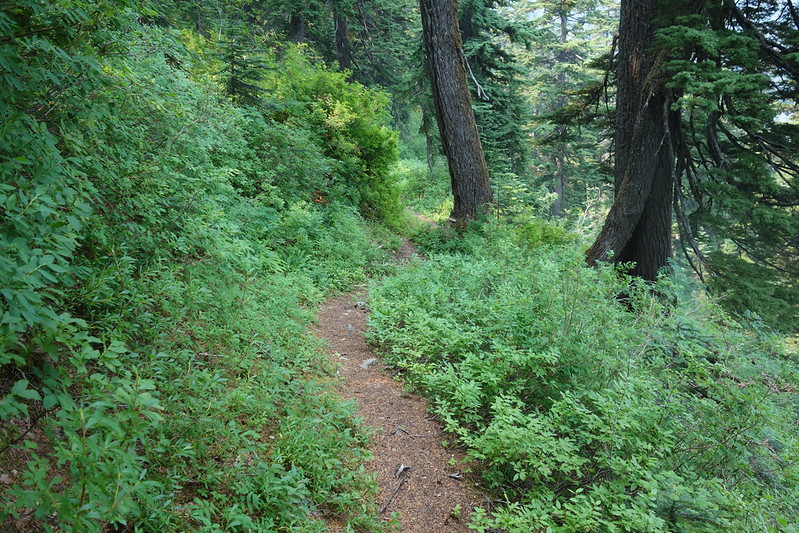 The tread switches back and forth from broad doubletrack to overgrown single. Here and there creeks cross, some simple to jump across, others requiring knee-deep wades. 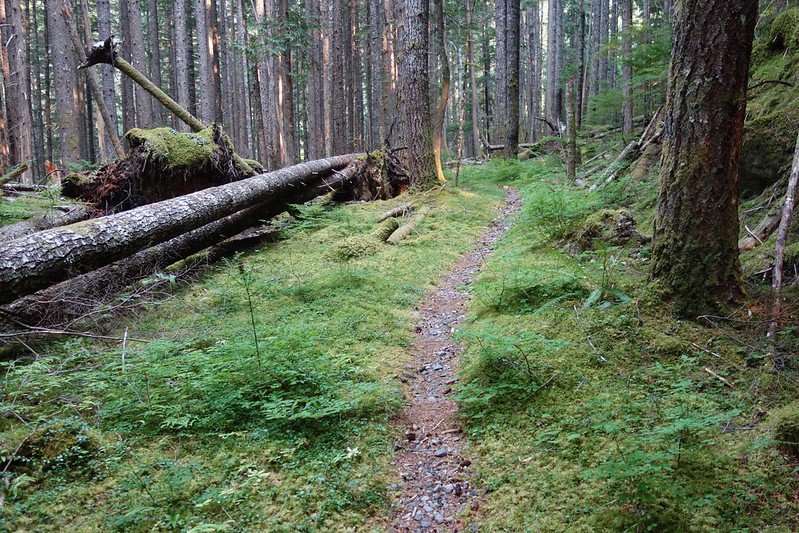 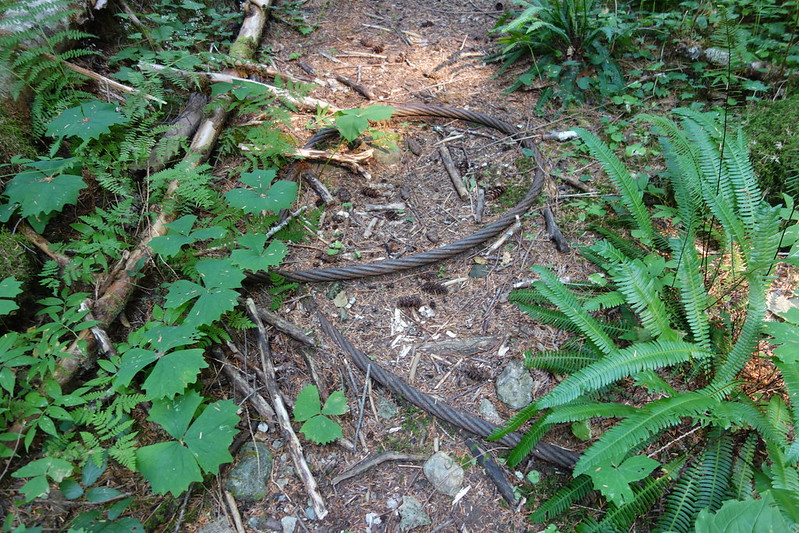 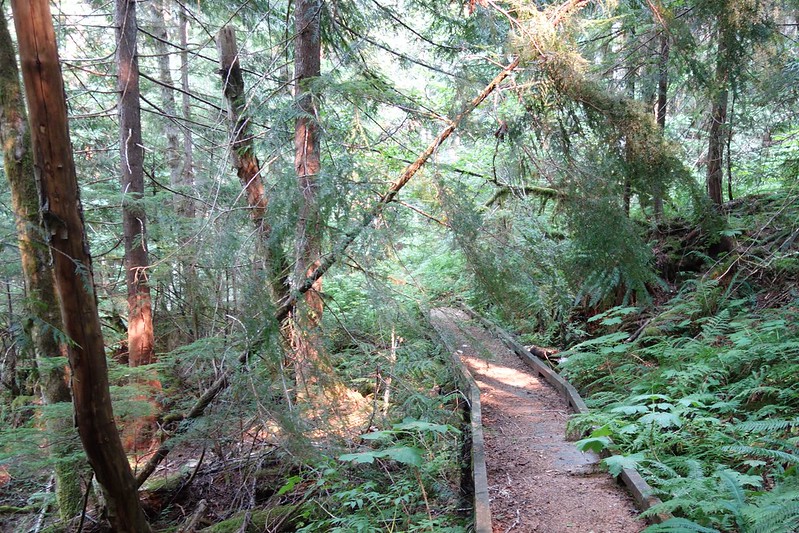 I stop for lunch in a little patch of sun along an unnamed trickle. The woods here are nearly silent. Somewhere down the valley an owl hoots, and it echoes up the canyon until it’s more a steady tone than a single staccato strike.

Nearing Goldmyer Hot Springs, there are a series of increasingly difficult creek crossings. I shimmy across Thunder Creek on a moldering log, thrash through a half mile of head-high brush in what the guidebook calls a “meadow,” then wade across Burnboot Creek. It’s above my waist but slow and warm and welcome. 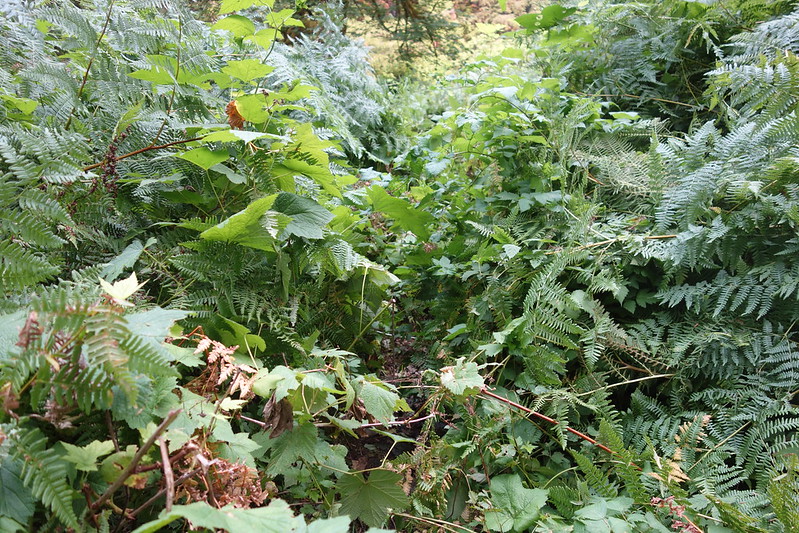 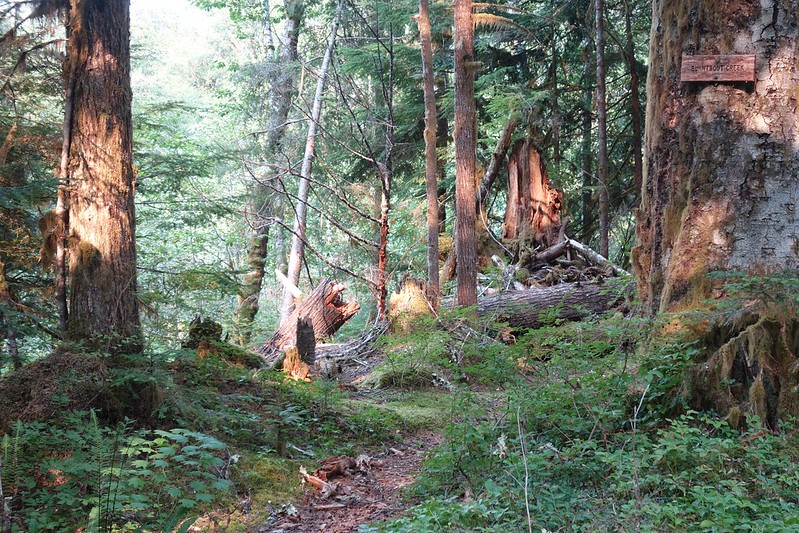 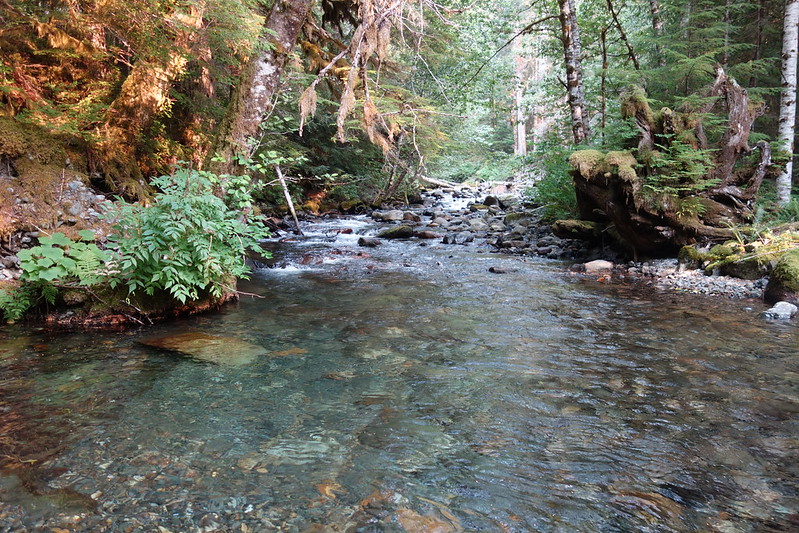 The hot springs itself is a confusing jumble of way trails and camps, many with old wood tables and chairs and lived-in fire rings. After a few false moves, I make my meandering way through, and end up at an enormous bridge crossing the Middle Fork, a remnant of when you could still drive all the way up there. 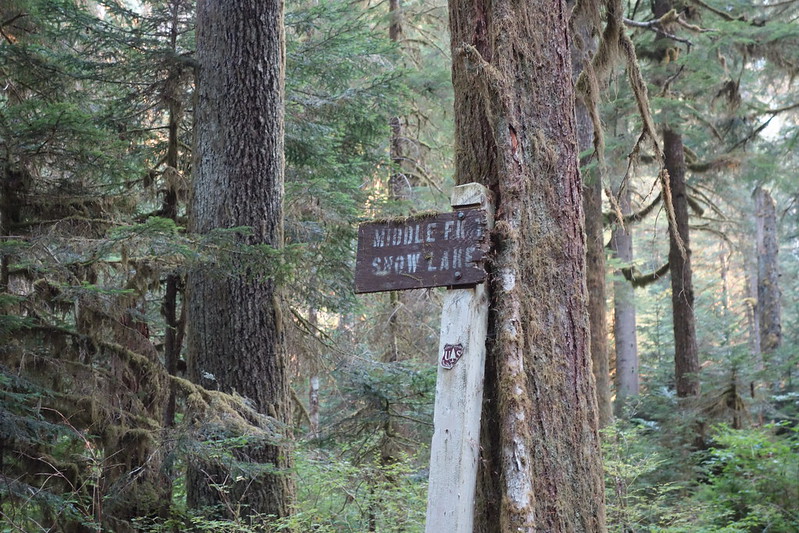 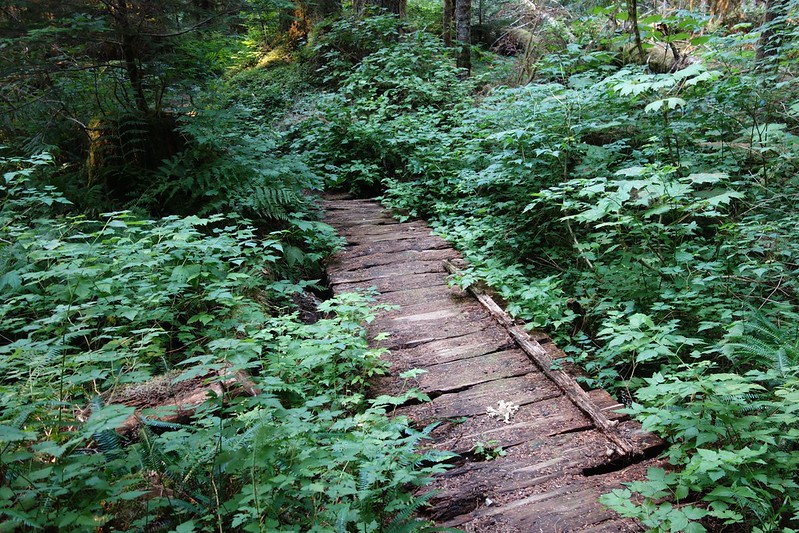 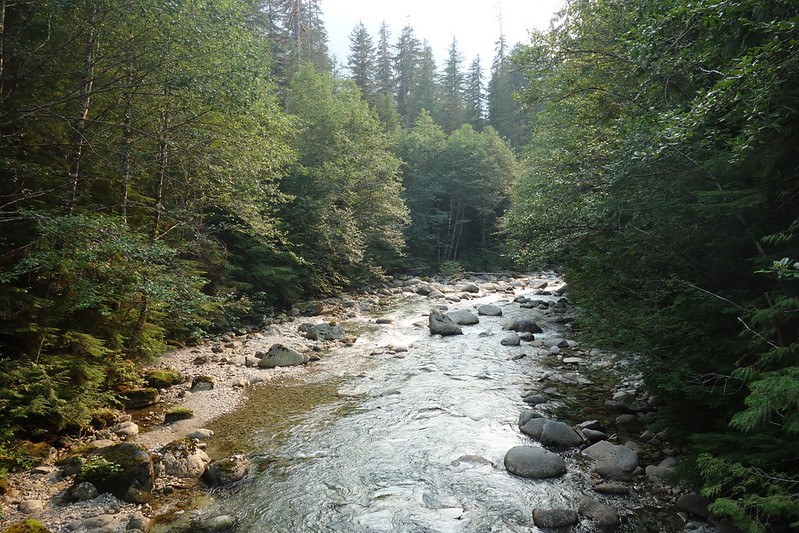 Crossing the bridge leads to an old arterial road. The Forest Service still has it labeled as Road 56, but it’s blocked by a slide a few miles down and it’s now fading into a multi-use path.

From the junction, it’s an easy three miles and thousand feet up to my planned camp for the night at the old, fantastically named Hardscrablle Horse Camp. And it turns into the most wonderful evening.

The Middle Fork does this magic trick. The scenery itself is sort of unspectacular: obvious second-growth, spurs to old mines. But, maybe because it’s all become so remote, or so forgotten, it also feels enchanted, like the setting of an old fairytale. The land before and after time. 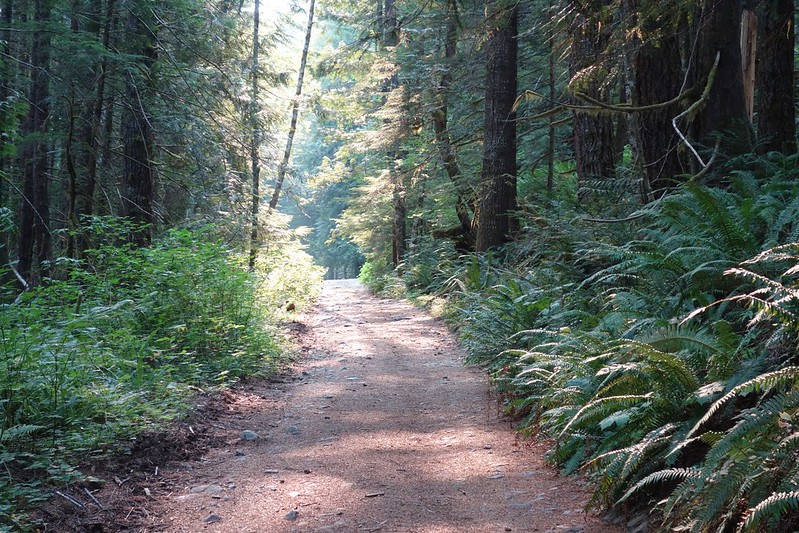 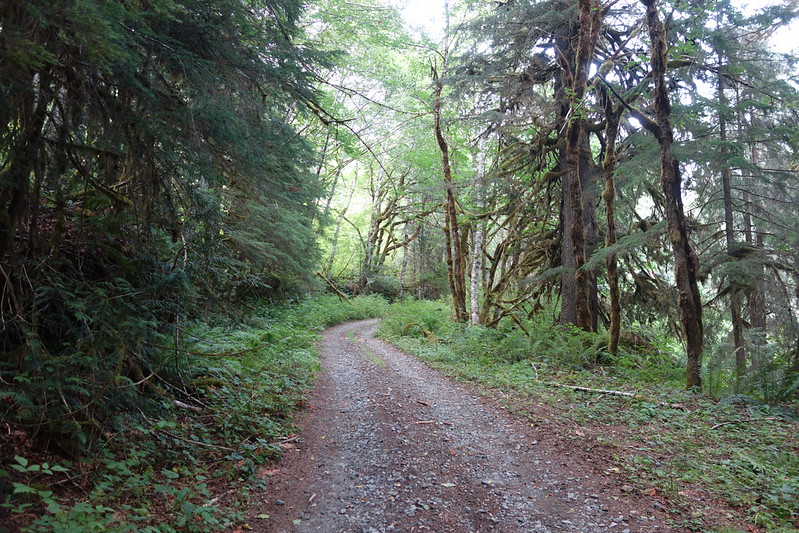 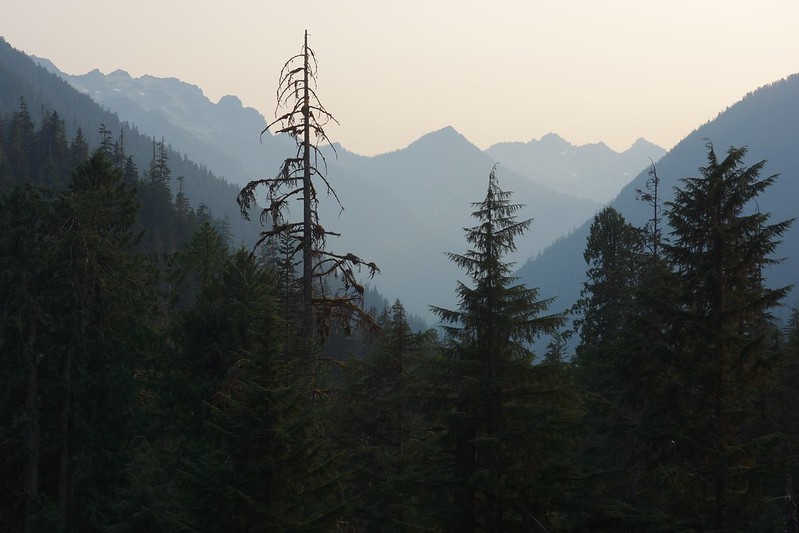 I get to thinking about this thing I think about a lot here. We tend to think of wilderness as an all-or-nothing proposition, as land utterly untouched by human hand. But that doesn’t really work with how we use the word. When we speak of wilderness, we more often speak of places we’ve once touched but have committed to touch no longer. There may be abandoned roads or rails, deserted mines, the healing scars of logging, empty towns turned to mossy logs and rusty nails. What matters is that we’re gone, not that we’ve never been. It’s about abdication, not purity.

I set up camp on an old tent pad in what was once a developed campground, then eat a resplendent dinner along the Middle Fork.

The smoke from the past few days dwindles with last light, and I stay out for a long time, watching the stars. 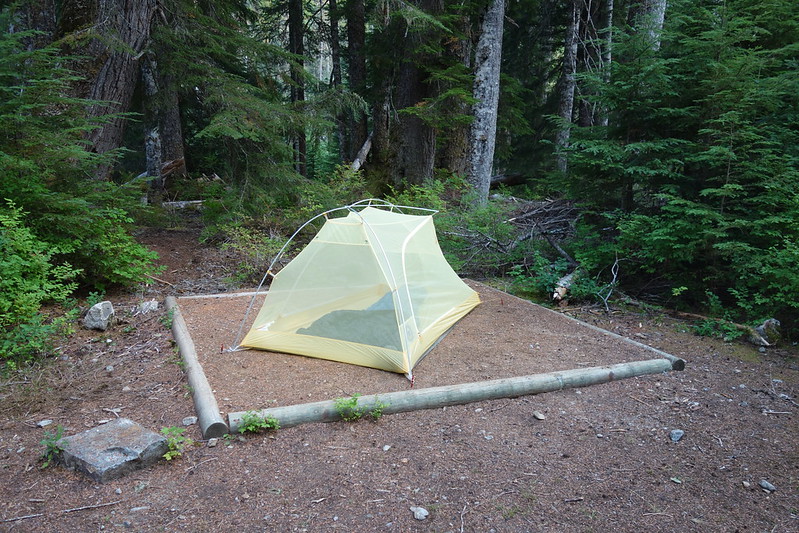