Park Lakes to Snoqualmie Pass via the PCT and Commonwealth Basin 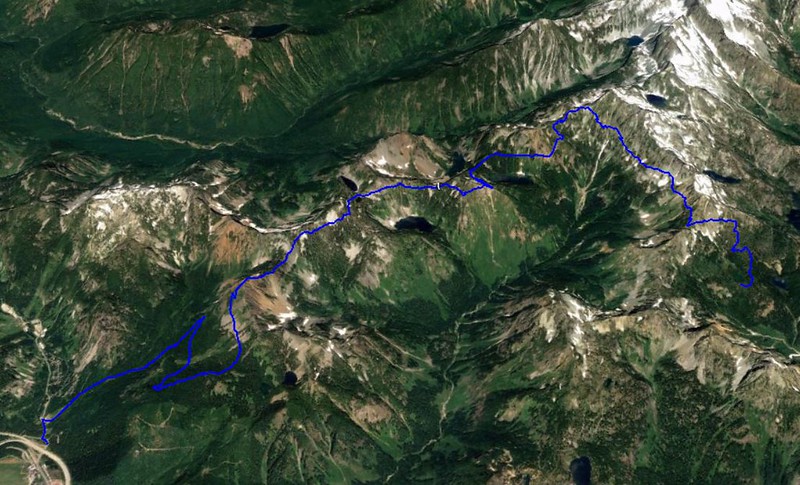 The birds are back at sunrise, singing softly to the hazy hills. Their songs echo off the water and rock into a gauzy wall of sound.

The trail’s wet with smoky dew as I climb through fields of talus and lupine to the minor pass between Gold and Mineral Creeks, then turn sharply to traverse below the Four Brothers and Chikamin Ridge. 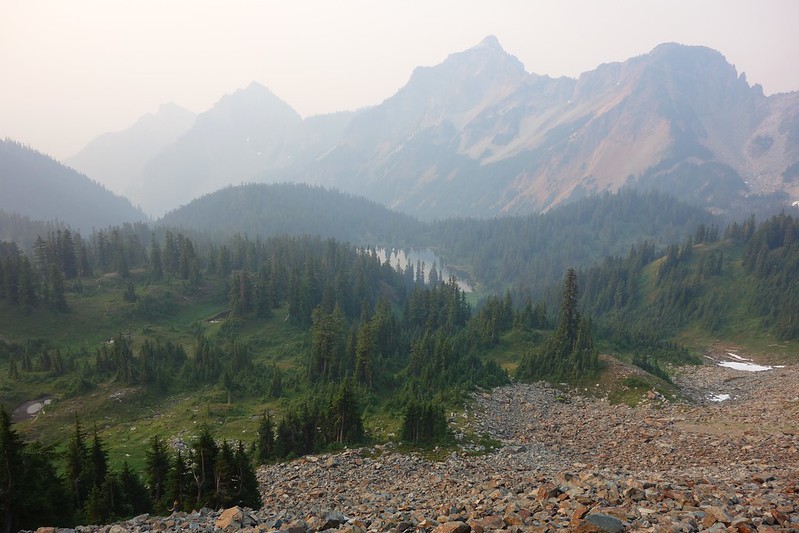 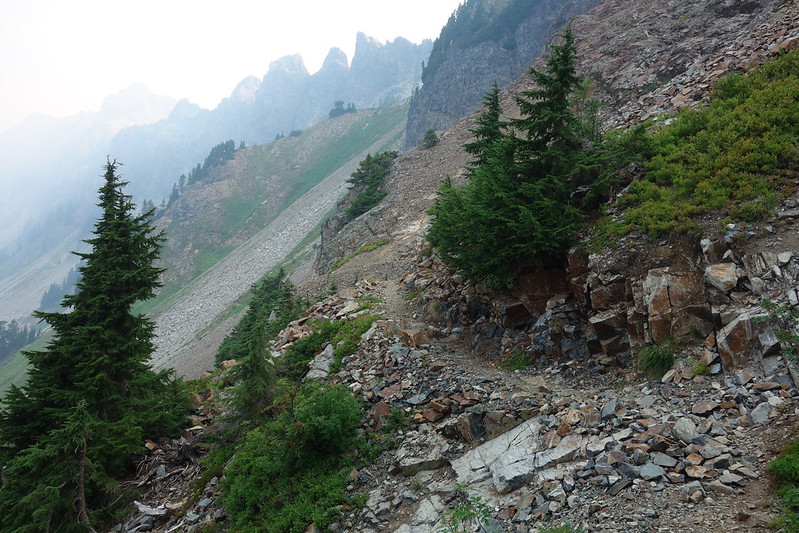 I remember this bit from years ago: rocky eroded tread through avalanche tracks and blooming meadows, steep steps around boulders and braided streams. 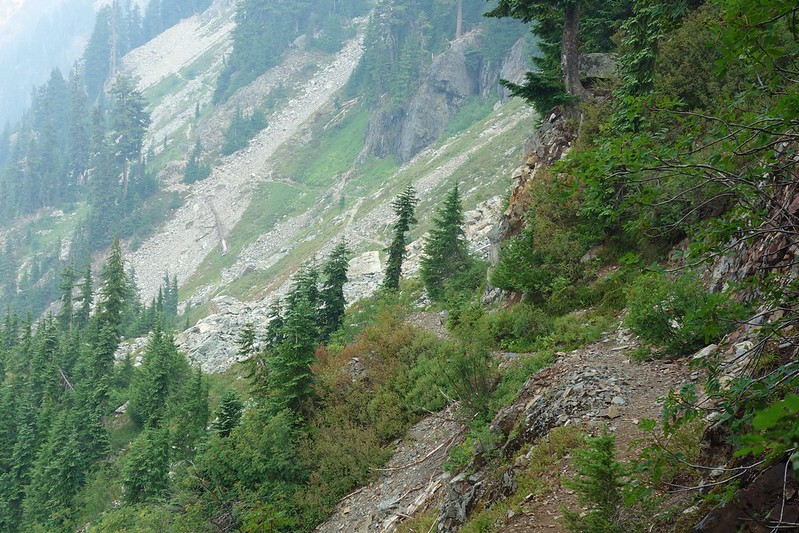 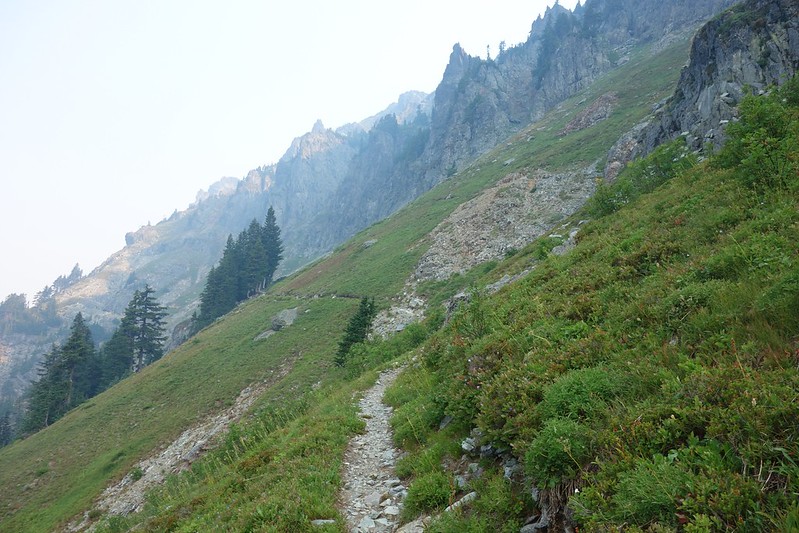 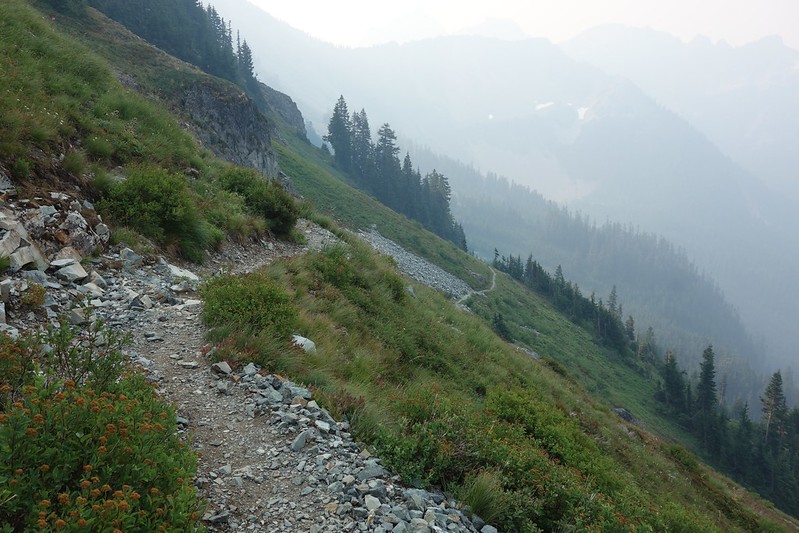 My thru hiker friend from yesterday passes, turned around on account of the smoke. “I guess the end’s coming sooner than I thought.”

At a small cleft in the ridge I pass a couple old guys with enormous external frame packs, parked precariously on trailside rocks drinking coffee from ceramic mugs. They hold up their mugs in unison. “Morning!”

“Morning!” I instinctively hold up my mostly empty water bottle in a sort of cheers. “Where are you headed?”

“Oh,” a long pause, as though this is the first time they’ve ever thought about it. I love them both instantly. “A ways north. We’re hoping to make Stehekin before the snow.”

It’s mid-August. Stehekin’s less than 200 miles away. They could hike 5 miles a day and still make it with time to spare.

“Ah, I doubt that that’ll be a problem for a couple strapping guys like yourselves.”

They laugh, again in unison. One—Bill, he’ll later tell me—spills his coffee. “What about you? Mexico?”

Now it’s my turn to be flattered. “No no! Just Snoqualmie today, then a weird route back up to Stevens and over to Icicle Creek next week.”

The trail draws a broad bend around the headwaters of Gold Creek. The range names change—Chickamin, then Huckleberry, then Alaska—but it’s all just a single ancient moraine where the last ice age stopped and turned back north. On the ridgetops glacial erratics stand strangely, out of place, like monuments to the mile of ice that once covered everything here.

I imagine it—the frozen rivers, the glow of sun on snow, the crash and creak of breaking rock, the quiet music of moulins—as I stare down the smoke-filled valley at I90’s unseen hum. 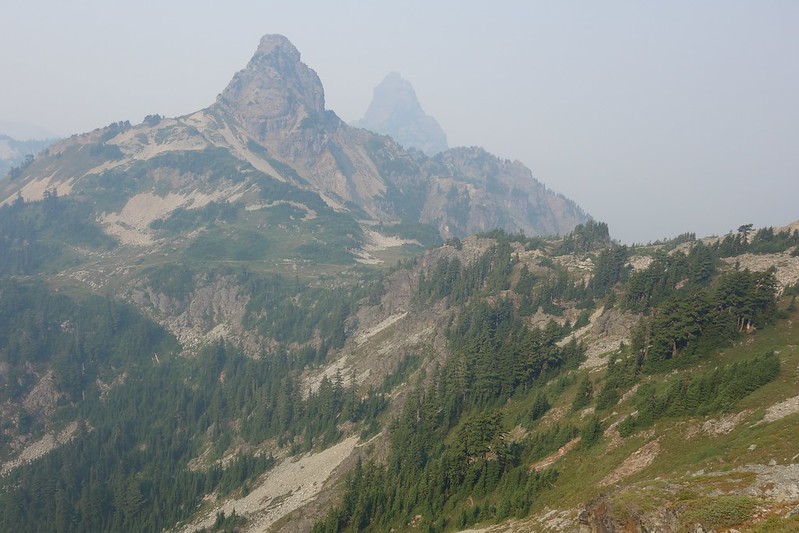 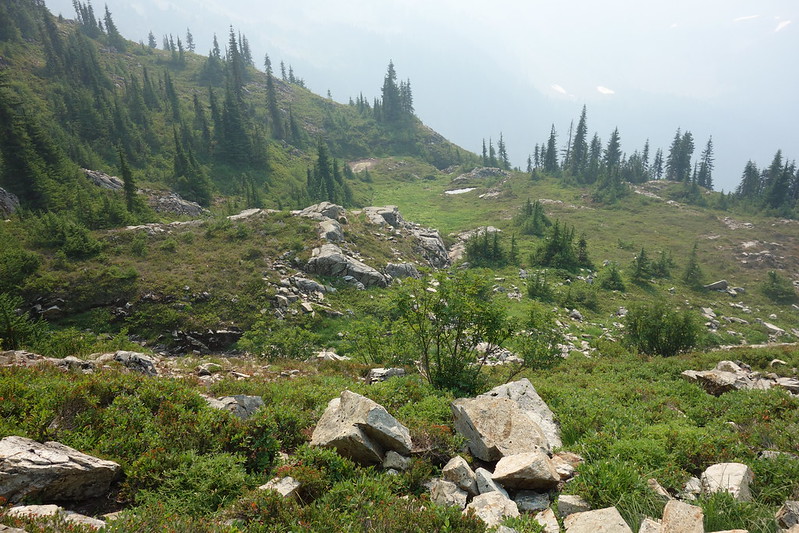 The crowds thicken as the trail drops to Ridge Lake, then the “Kendall Katwalk,” a mile-long walkway blasted into Red Mountain’s white granite shoulder. Dayhikers and dogs pass the other way, as do weekenders with pans tied precariously to their packs. 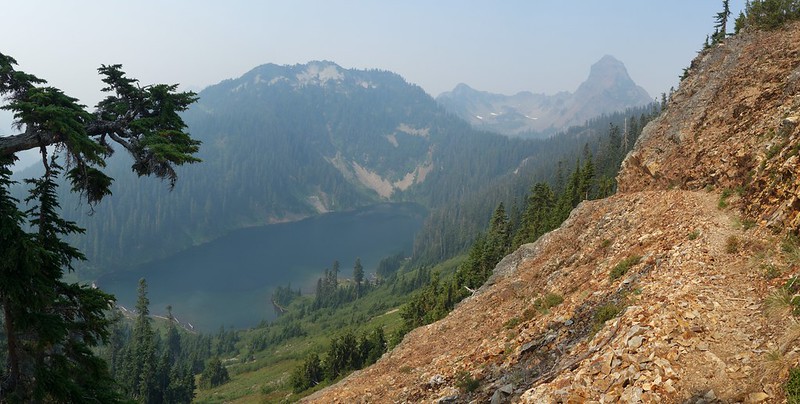 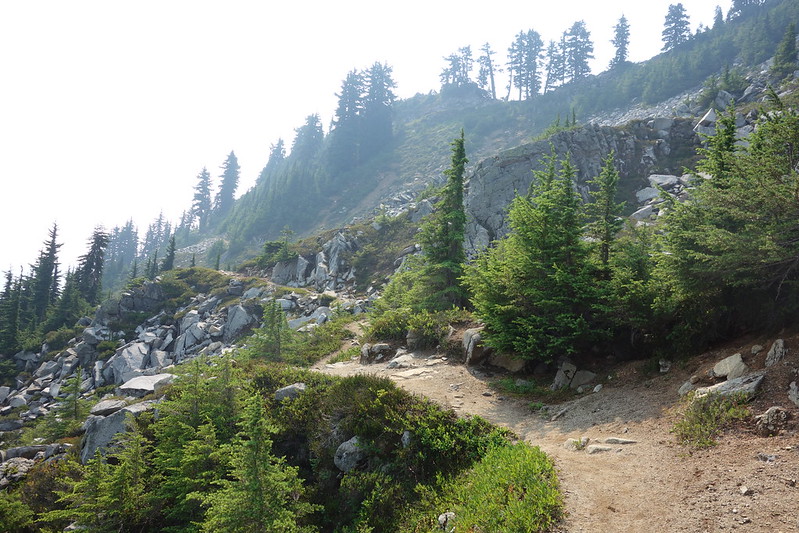 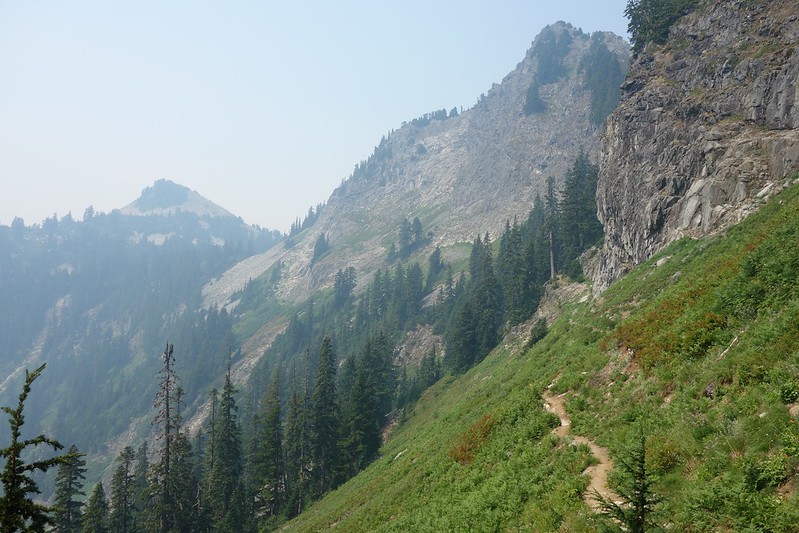 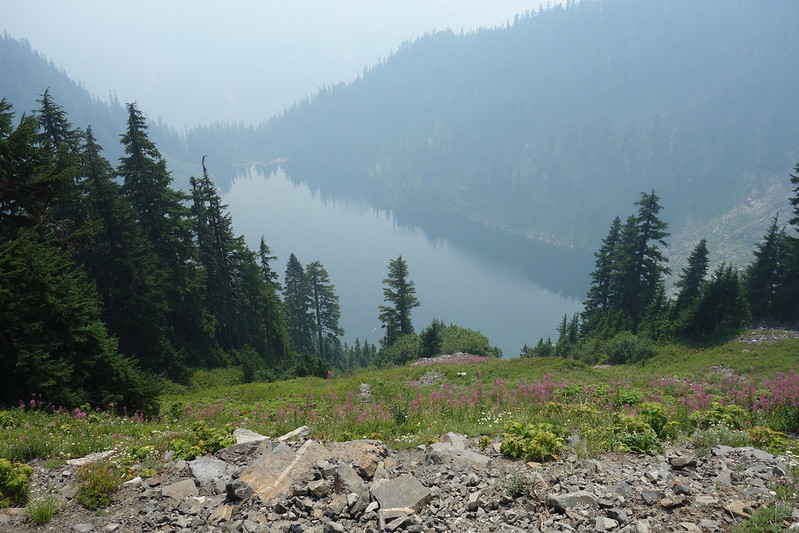 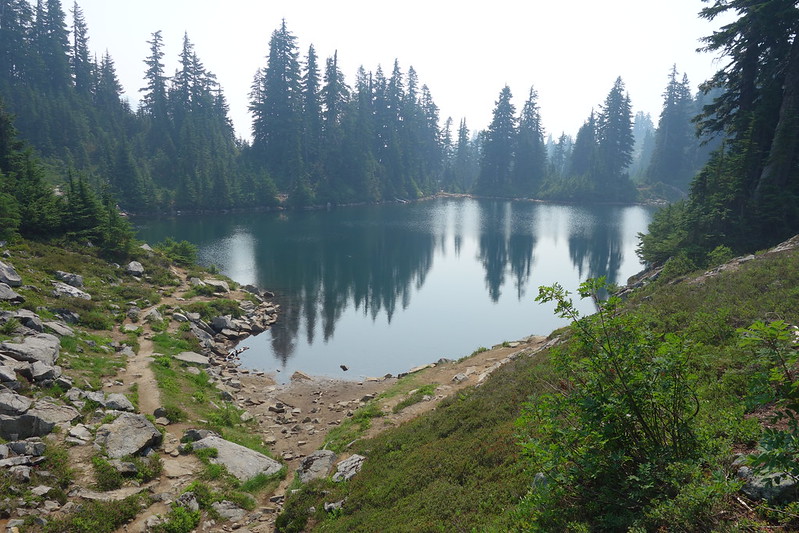 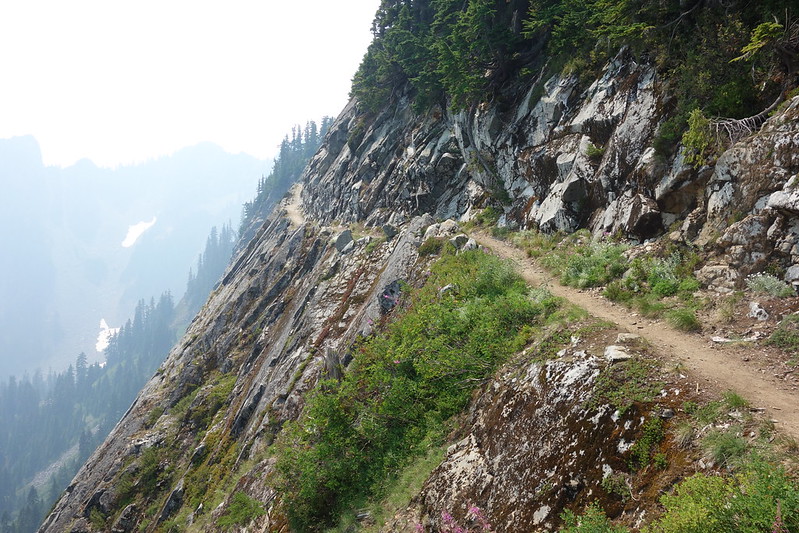 From the Katwalk, it’s just a long drop to Snoqualmie Pass. I sneak a quick lunch on the ridge beneath Kendall Peak, then tumble through the deep afternoon heat off the PCT to the old, now-unofficial path along Commonwealth Creek. 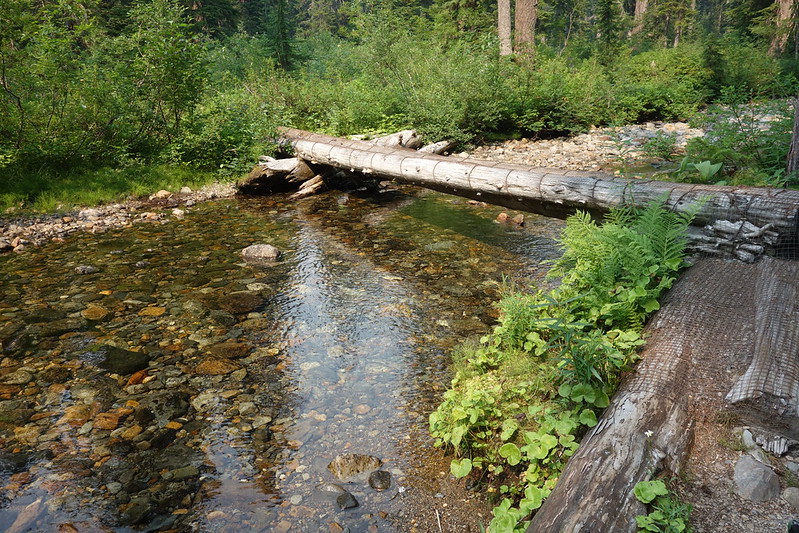 The creek leads down to the crowded trailhead, then a hot black road under the freeway to the sweltering huddle of buildings at Snoqualmie. 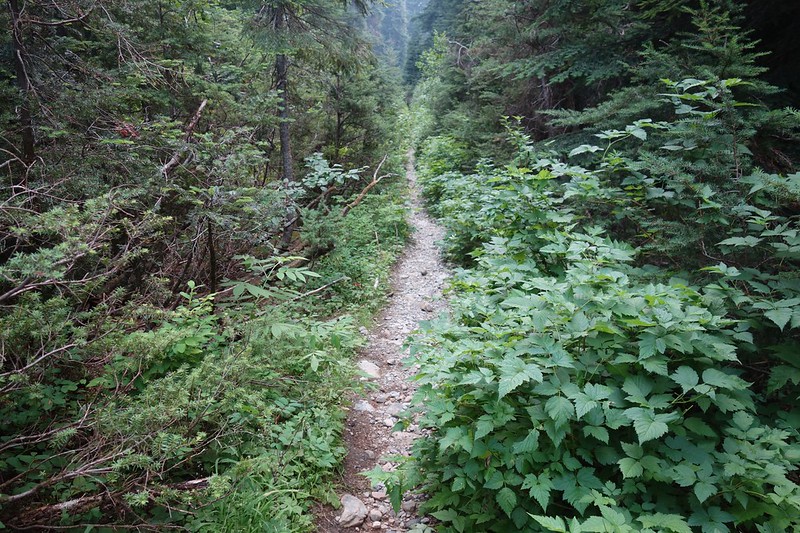 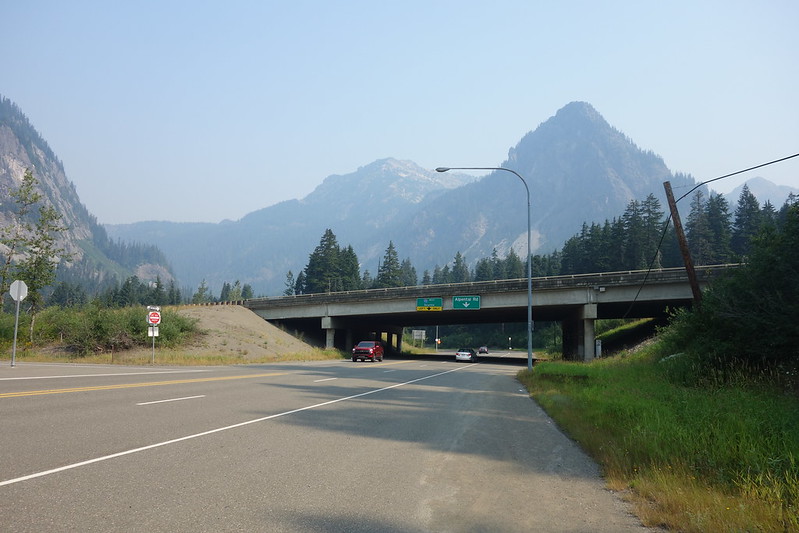 The hotel lobby’s full of PCT hikers, young kids whining aggressively at the elderly Vietnamese woman at the counter about prices and policies. Someone’s air conditioning doesn’t work. An angry boy in his early 20s calls the hotel’s policy against room stacking “fascist.” The wifi’s slow. Why is the laundry so much?

I’ve been feeling this thing for a while: that the PCT’s turned into something that no longer interests me. The trail itself is of course not the problem—it’s just exquisite, just today it almost brought me to tears—but there’s something ugly creeping into the culture that surrounds it, like somewhere folks forgot how lucky we all are to be here.

I shower with all my clothes on, then limp out in flip flops, suddenly sore, through the heat to find some dinner. Fried food and a very large, very cold, very weak beer.

Back in the room Krista and I talk for hours. The usual thing: it’s been years for me, just a week for her. It’s hot in Portland, hot everywhere. She’s been worried about me. I tell her I’m fine: the air conditioning doesn’t work in my room, but there’s a fan and as much cold water as I want and an ice machine just down the hall.

4 thoughts on “Across the Alpine Lakes, Day 7: Paradise City”