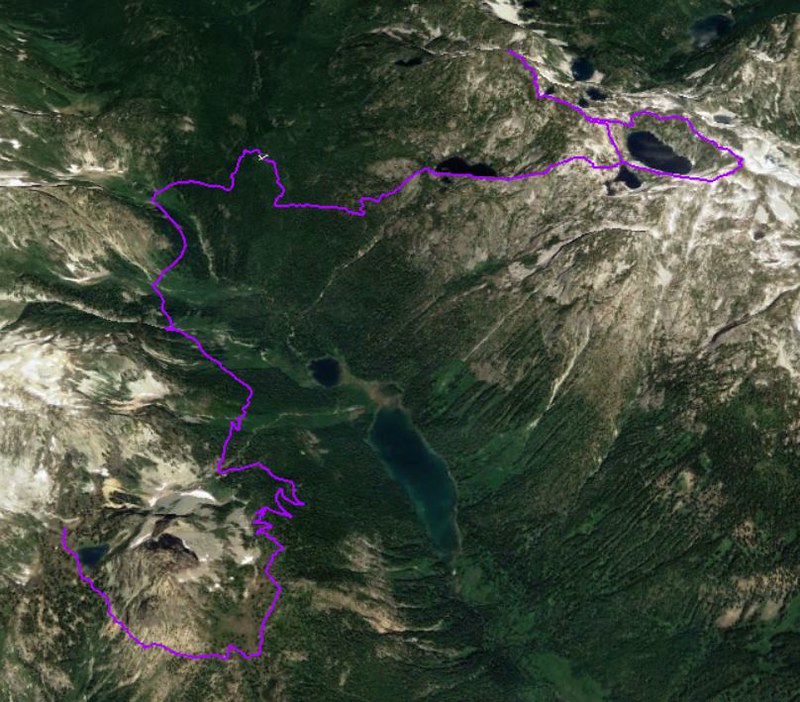 The wind wails all night. White-capped waves crash against Robin Lake’s hard stone shore and echo up 300 feet of granite to my little sheltered camp. My tent feels like a tiny ship at sea, a small speck surrounded by the squalls of an infinite ocean.

I imagine myself in the periphery of an early romantic scene, maybe the ship in Rembrandt’s Storm on the Sea of Galilee, but if the sea and sky had somehow surged past the painting’s edges to flood the walls and floors of some lost gallery. I imagine patrons running, wet-footed and followed by waves to the streets, where the wild flows to fill the world again, the water and wind let in through the cracks of our dreams.

I wake to a dream of soft gauzy skies on glinting granite and the more pedestrian problem of breakfast.

The wind’s blowing so hard that I can’t get my stove to stay lit. I try shielding it with various improbable windscreens until eventually making myself into the windscreen, lying down in an awkward semicircle around the stove. It works. Mostly.

The rest of the morning’s a pleasant, meandering stroll around the lakes and surrounding peaks: up Trico Mountain and past the Granite Potholes, up Granite Mountain’s surprisingly easy north summit, and finally down the ridge that separates upper from lower Robin Lake. 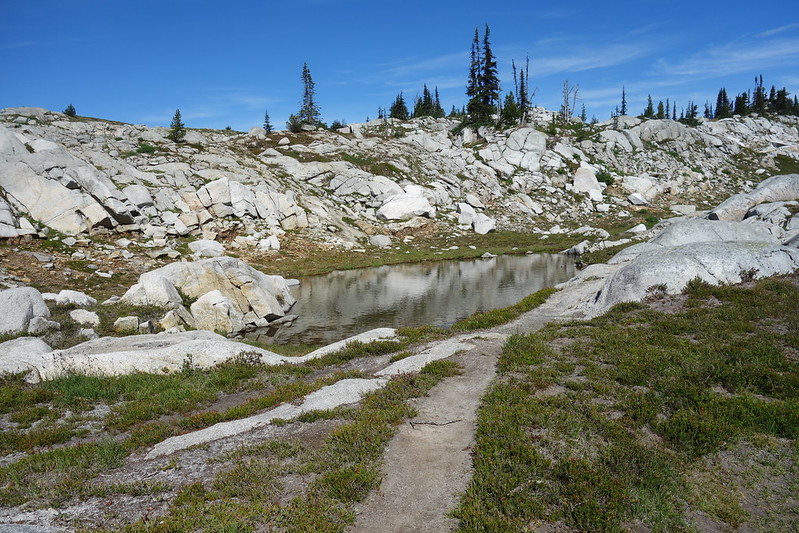 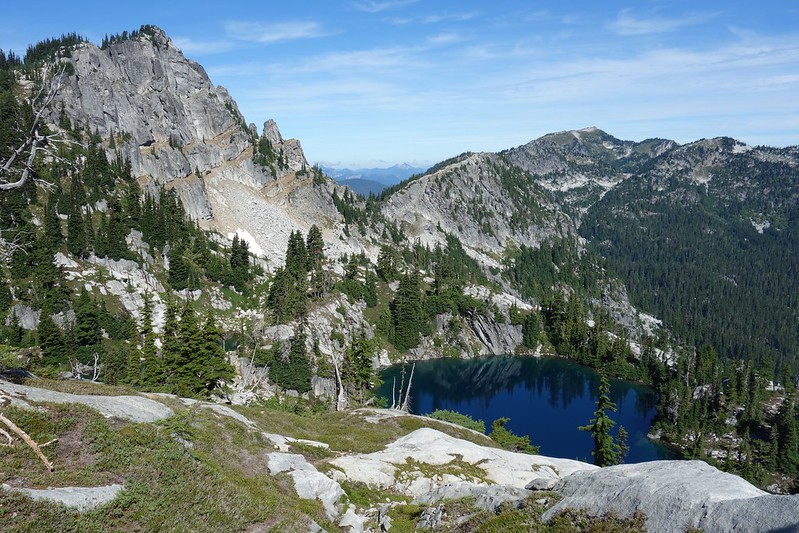 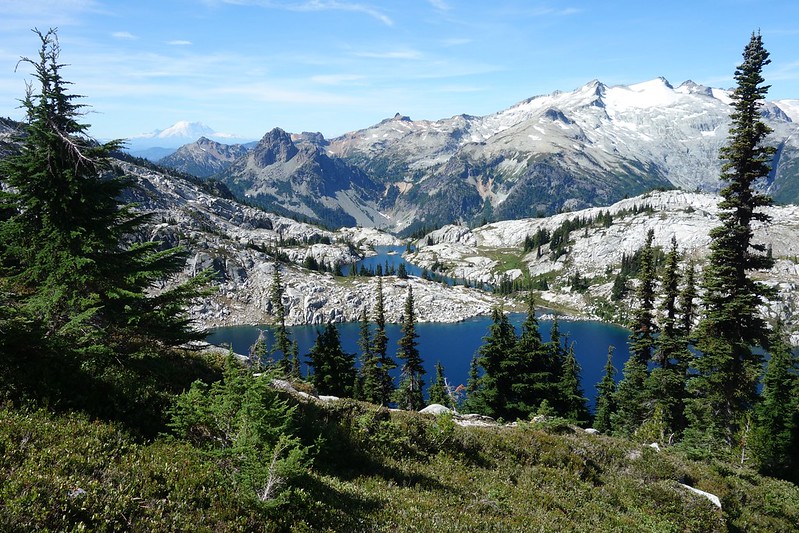 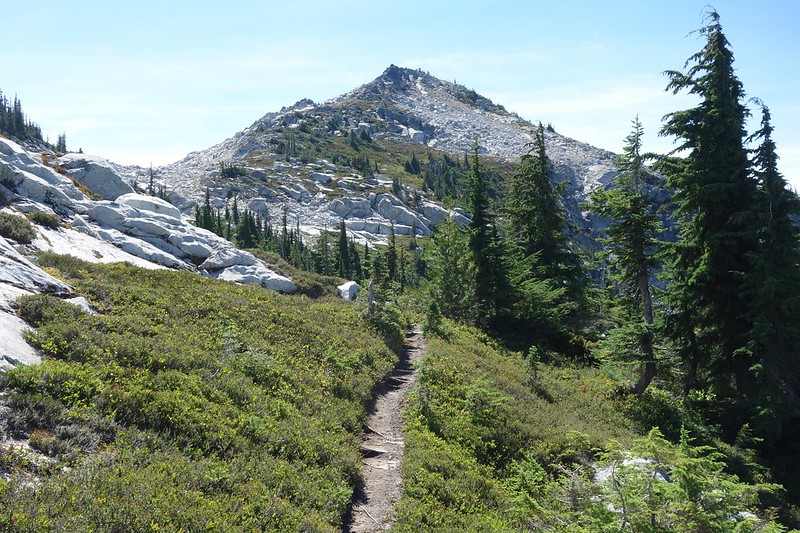 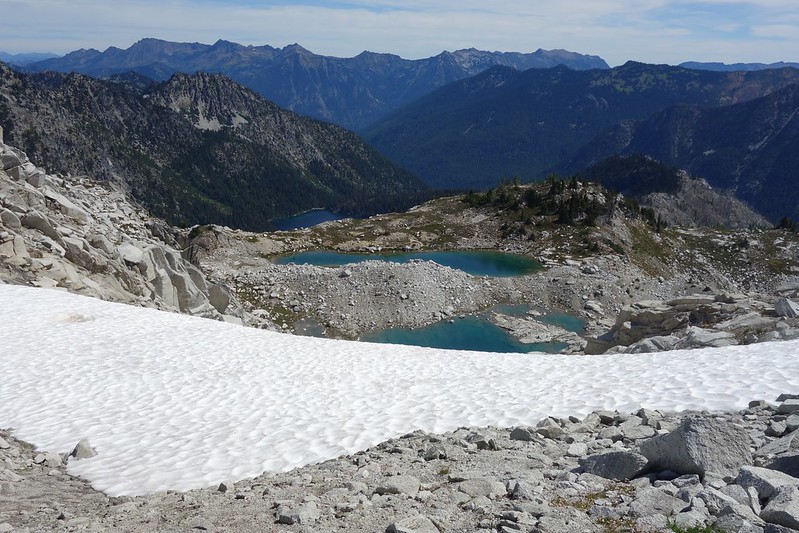 Apart from some loose talus at the end, the whole thing’s mellow and open. I put on some old Pavement and just lose myself in the hills. 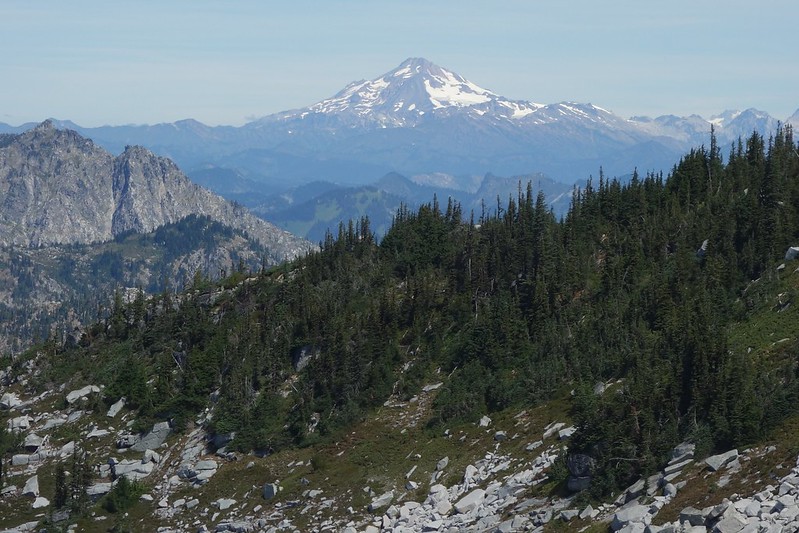 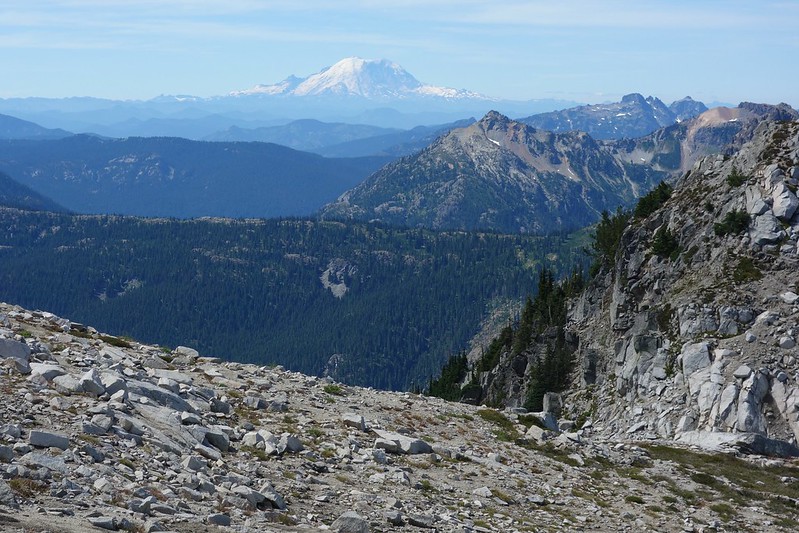 It’s early afternoon by the time I make it back to the tent, and I rush a bit, wrestling against the wind to break things down, weighting my things with rocks to make sure they won’t fly away.

The way down’s fast and fun, butt-scooting down steep roots and sandy rocks, holding onto tree trucks to keep myself stable. I stop for a while at Tuck Lake to eat and filter water, then continue down the dusty trail. 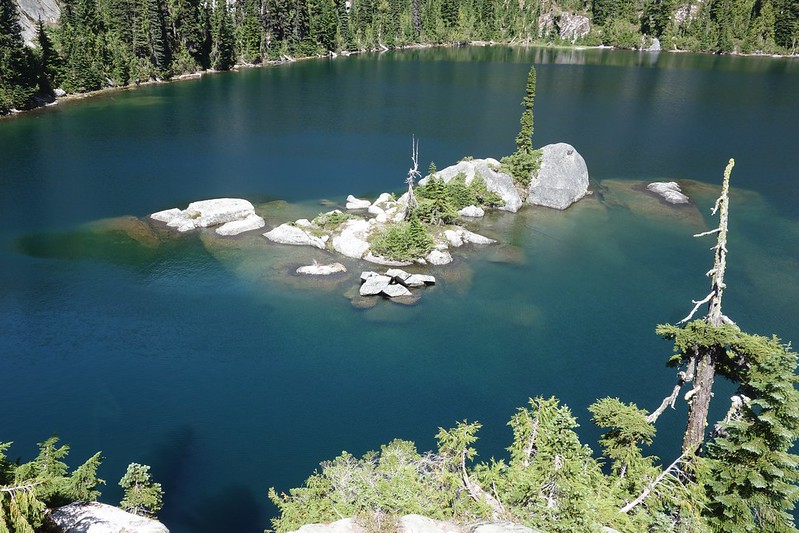 The day’s gotten hot—over 100—and I pass half a dozen folks sweating their ways up. A boy in combat boots swears under his breath as I pass, punching two flies off his leg in a single shot. A woman in a bra and jeans looks plaintive. “It’s just… so… hot.”

From the Robin Lakes Way Trail, I climb slightly up to Deception Pass, then cut south on the PCT toward Cathedral Pass. 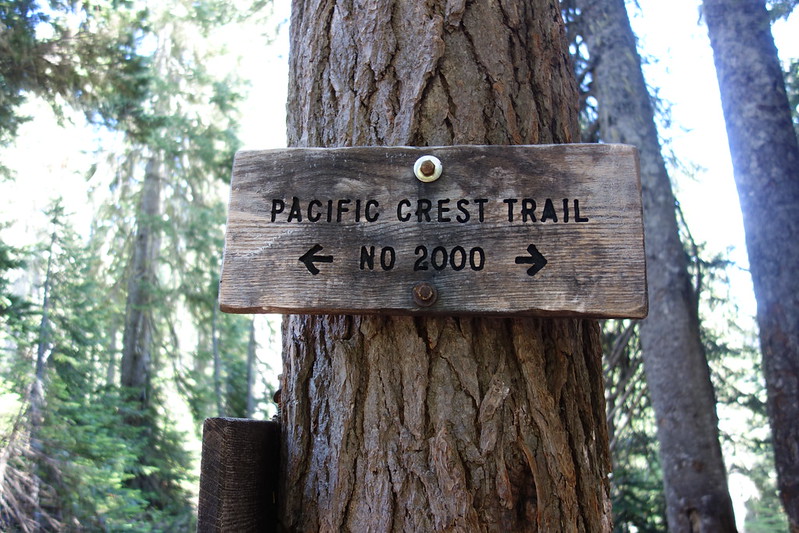 Immediately, the PCT acts like the PCT. A dozen folks are packed into a single tent spot below the trail, smiling and laughing with their legs stretched out all over each other. Two girls—section hiking sisters—stop me to ask about available campsites, and weather, and water, and… whether they’ll be okay.

They remind me of me, here almost exactly five years ago, asking everyone I met in one way or another if I’d be okay. 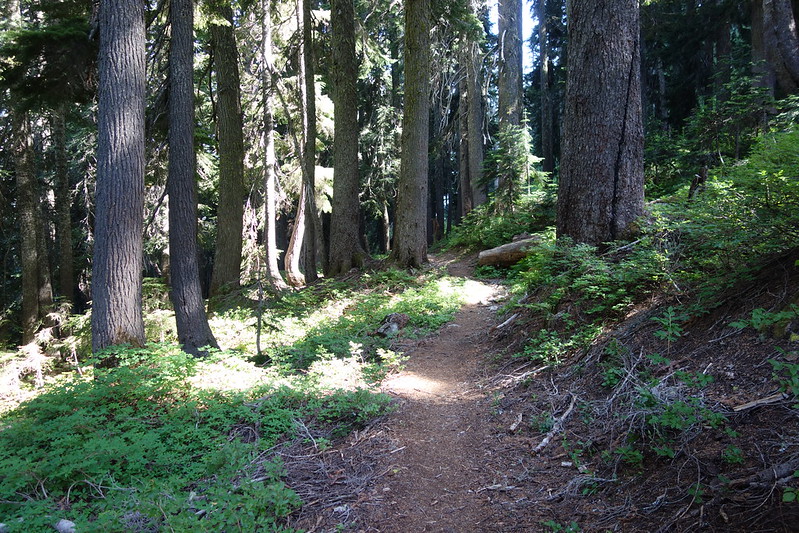 The trail drops a bit to cross the fast-flowing whitewater at the head of the Cle Elum River, then climbs steeply through huckleberries and avalanche tracks to Cathedral Pass. 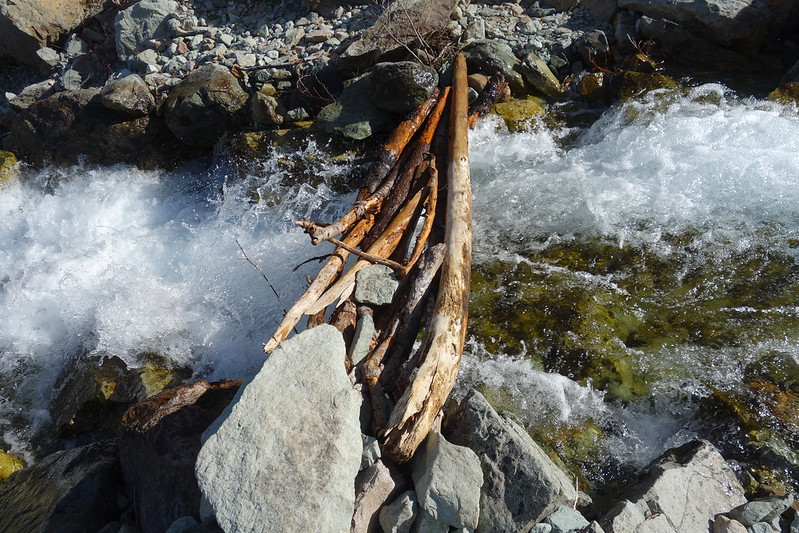 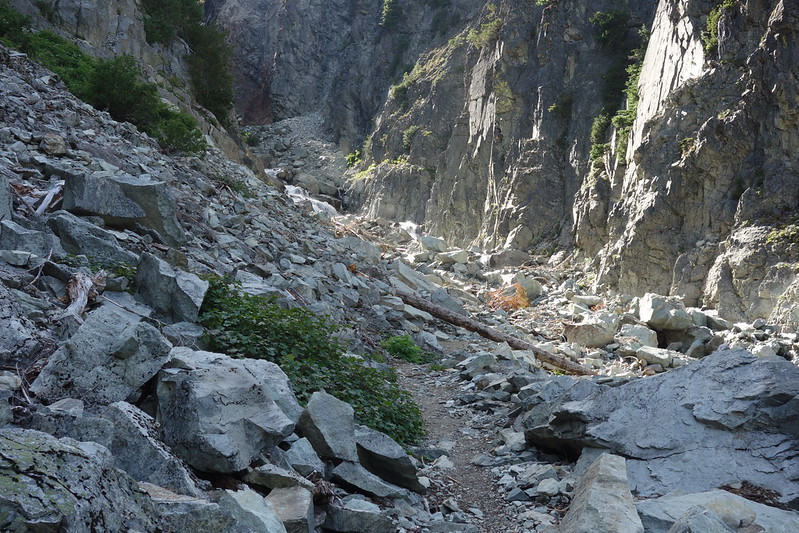 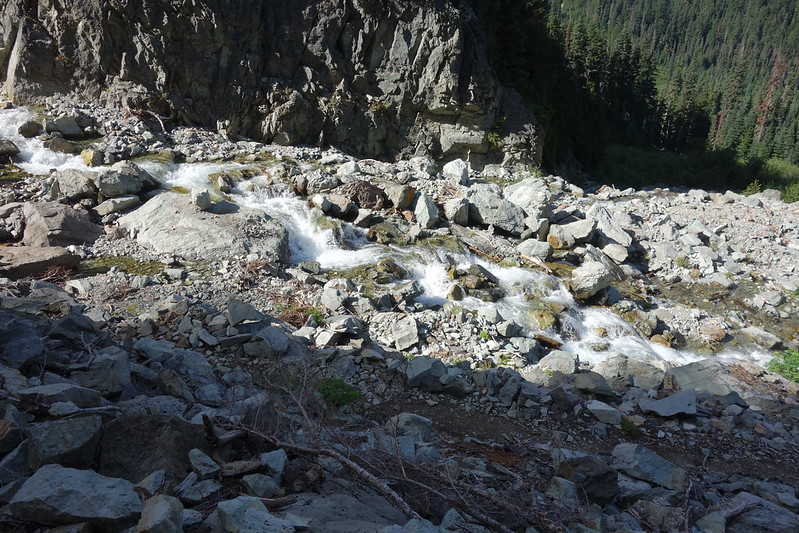 Halfway up, I meet a rail-thin couple of thru-hikers, a guy in girl, both in their late-20s. They’re lying in a small clearing next to the trail, lackadaisically picking berries, staring at the sky. We talk for a while. They’re at the end of their hike, or near it anyway. It’s been four months and two-thousand miles. The guy tells me, “every step is precious now.” Then a second later. “Every step’s always been precious.” He laughs. “It took us a while to realize that.” 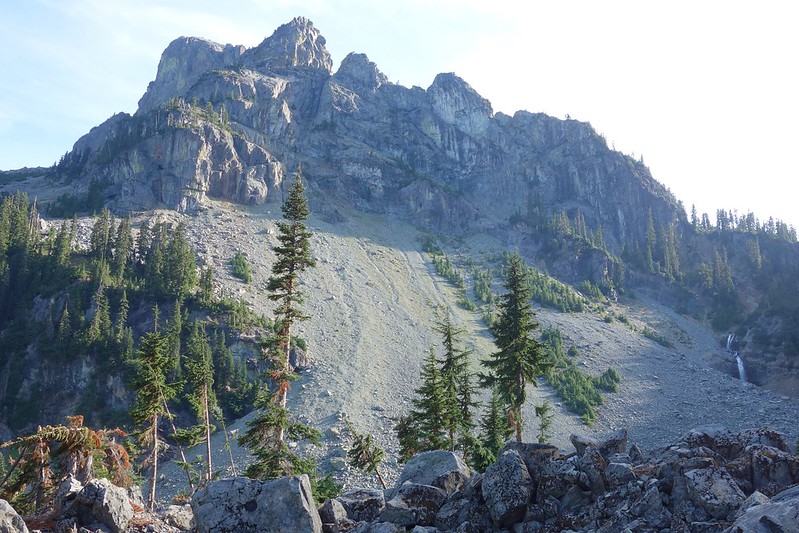 I reach Cathedral Pass near sunset. It’s a broad series of ponds and huckleberry meadows, tucked on Cathedral Peak’s southern shoulder, and I wander through in the cooling dusk as if, again, in a dream. But this time a dream of calm seas and a settled sky. 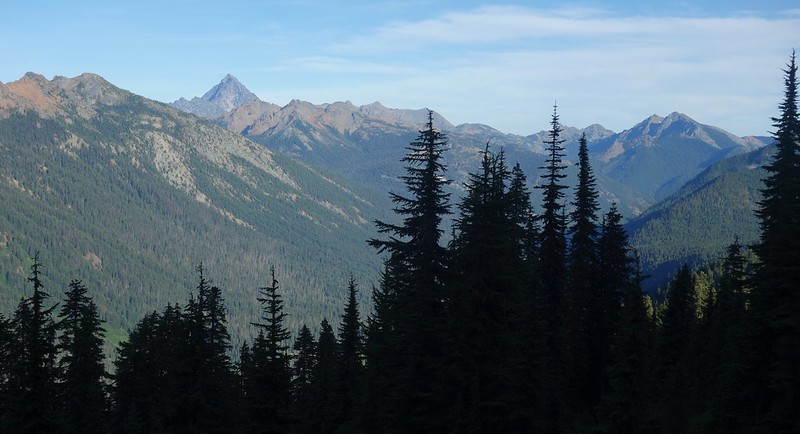 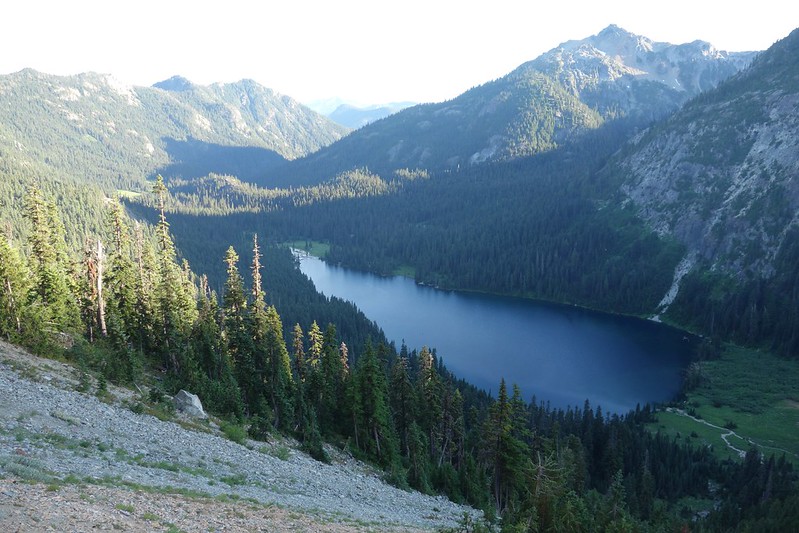 The light’s fading fast as I reach the way trail to Peggy’s Pond, but there’s enough light to make it to camp and setup without a headlamp.

The bugs are bad, and I eat in the tent, watching the world go dark. Then stars through the thin cracks in the tree cover, a plane blinking red and blue.