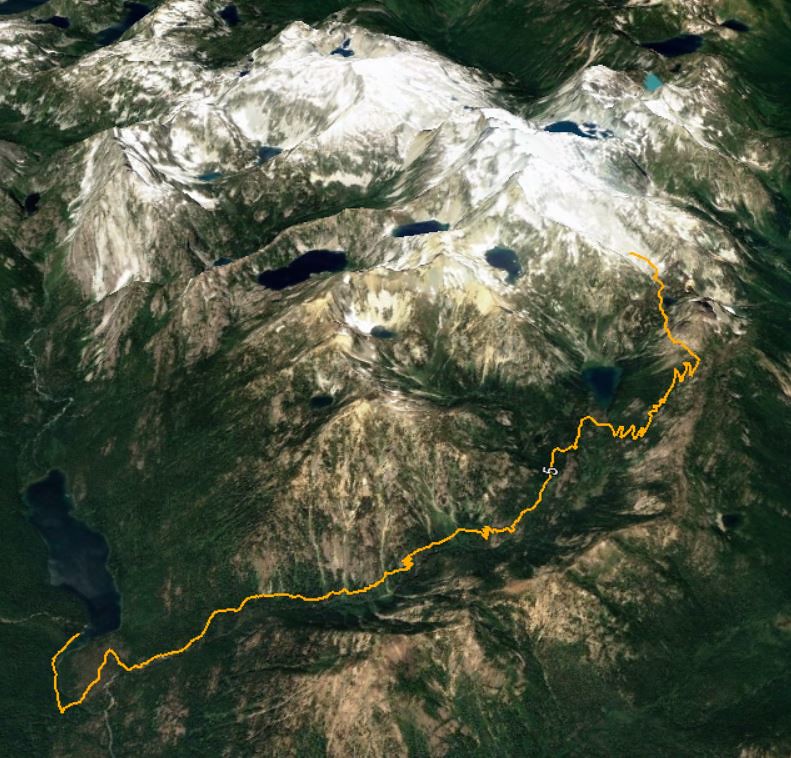 The day breaks warm, and I wander up through the glacial streams that braid down Mt. Daniel’s east side. 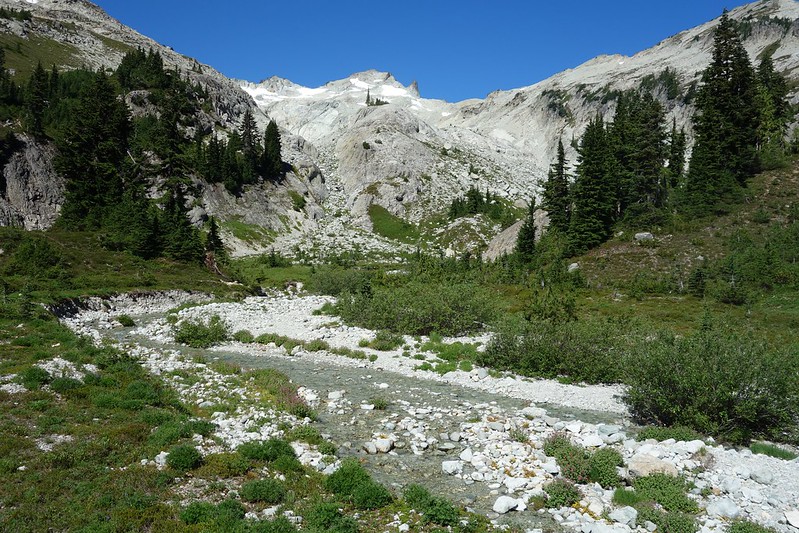 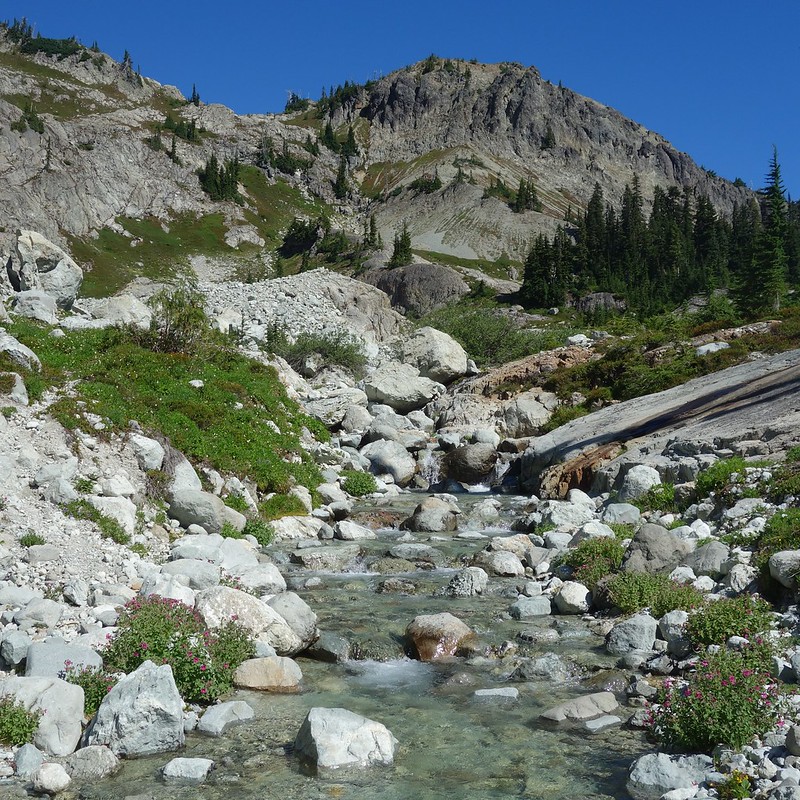 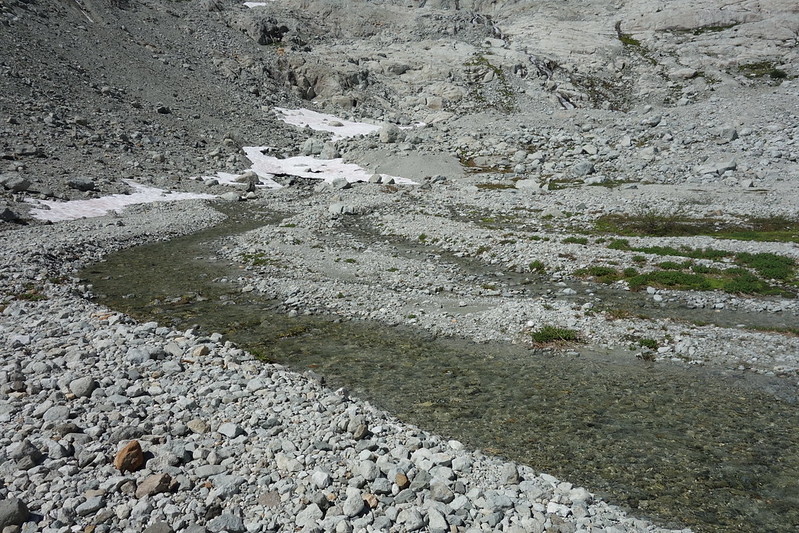 I remember this from years ago: a floodplain of flowers and scree, towers of granite and the punched-through ghost of an unnamed glacier, now mostly gone. 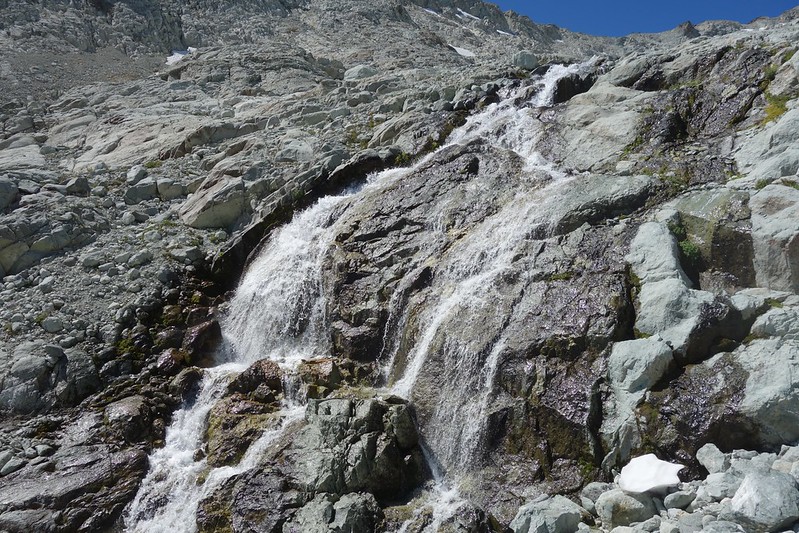 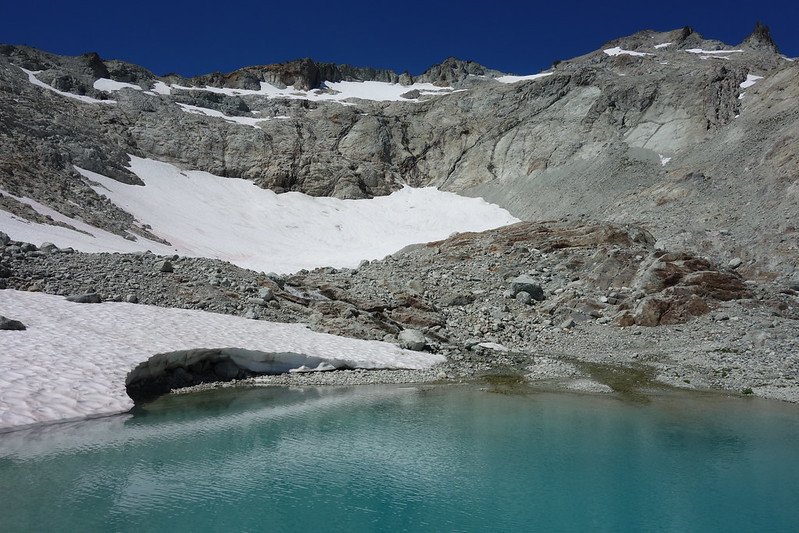 The bugs are bad down by Peggy’s Pond, but here the wind’s too stout for their little wings, and I sit for a while, watching rocks fall. I take some water from the melting snow, eat a little peanut butter on a tortilla.

Then down the kicked-in path across Cathedral Rock’s west shoulder to the PCT, and down further, through the familiar switchbacks to Deep Lake. 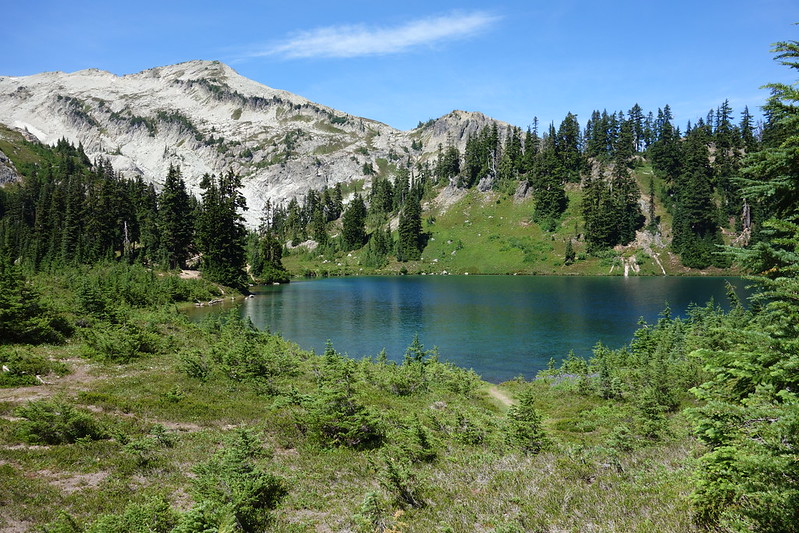 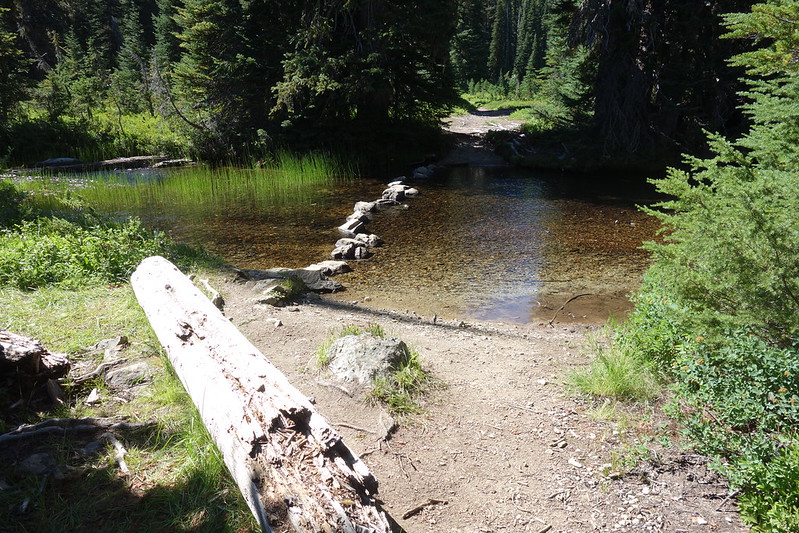 An older couple limps slowly up the other way, walking from Snoqualmie to Stevens. Sweating. It’s well over a hundred, and they’re out of water. I offer them some of mine, but no. “Covid.” 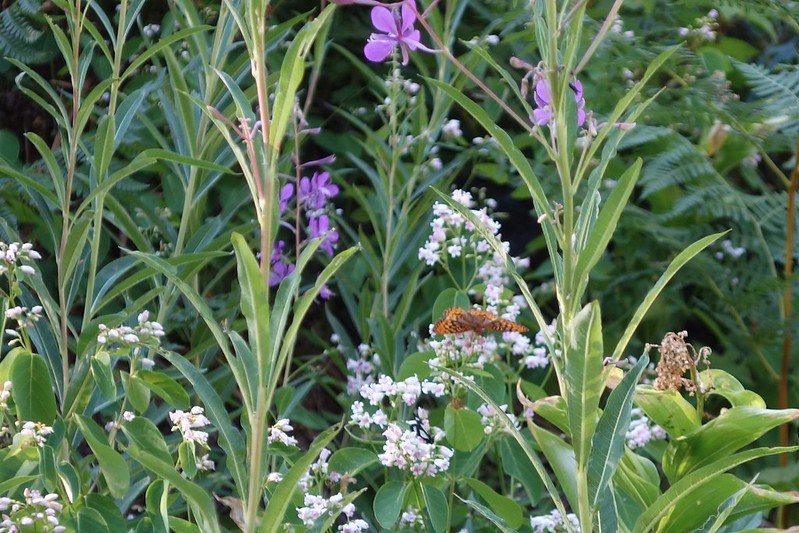 I drink two liters in the two miles to the Lake, then nearly six more in the long five down Spinola Creek to Waptus Lake.

Everyone’s going the other way. I remember going that way too, five years ago—almost exactly five years ago. I’d been walking for weeks, but I was still so scared: scared of… I don’t know exactly. Scared of the weather, of loneliness, of not being able to do it. And scared of the future: I’d just finished my PhD, and my plans were far less definite than I’d have liked.

I watch two brothers slowly limp up the sweltering switchbacks and imagine myself behind them: my enormous pack, enormous headphones playing some Podcast to remind me of home. It would have been early afternoon. I wouldn’t have eaten yet.

I want to say I miss that me, but that’s not exactly right.

We sometimes speak of nostalgia as a simple sort of yearning for the past—the desire to be back there, to be that person again. To live in a world that’s long-since vanished.

That nostalgia scares me. It can be a pick that punctures the future, a way for the past to rob the present of its promise, a shadow that lingers so large we can’t watch the majesty unfolding in front of us.

I don’t yearn for who I was. And I’m not sad that person—that world—is gone. What I am is grateful. Grateful for the path that leads from then to now, and for the chance to see that self from both sides: from the past that brought me there, and the future that was already appearing. 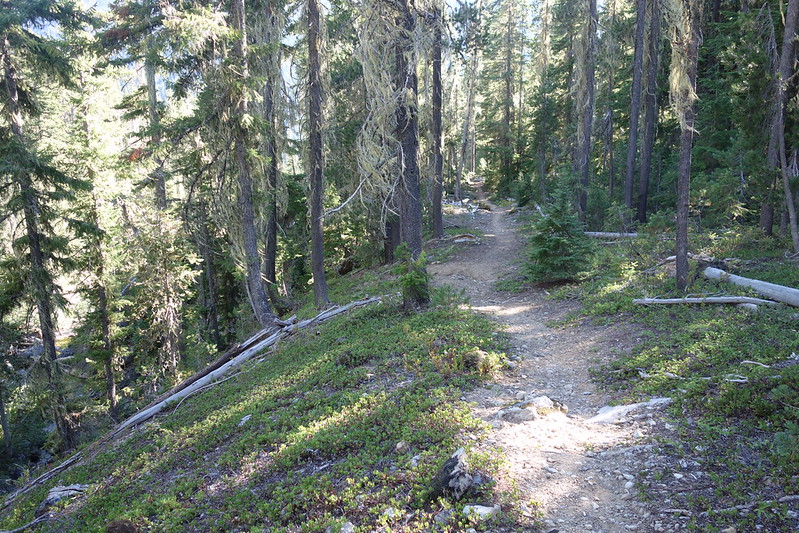 There’s this old passage in Saul Bellow’s Henderson the Rain King that I’ve always loved. I loved it before I knew it was Bellow, before I knew who Bellow was. Like everyone, I knew it from Joni Mitchell, but like Bellow’s better now.

The narrator—a middle-aged man with not much to show for it but money—follows his empty inner voice to Africa, looking for some sort of absolution:

Africa reached my feelings right away even in the air, from which it looked like the ancient bed of mankind. And at a height of three miles, sitting above the clouds, I felt like an airborne seed. From the cracks in the earth the rivers pinched back at the sun. They shone out like smelters’ puddles, and then they took a crust and were covered over. As for the vegetable kingdom, it hardly existed from the air; it looked to me no more than an inch in height. And I dreamed down at the clouds, and thought that when I was a kid I had dreamed up at them, and having dreamed at the clouds from both sides as no other generation of men has done, one should be able to accept his death very easily.

There’s an old tradition of taking time to be an enemy—in Augustine, the most potent punishment for original sin—because time can tear a life apart, separating out points in what should be a single, cohesive whole.

But I don’t think that’s right.

That old tradition imagines an alternative: a world without time, the “standing now” in Boethius or Augustine’s divine eternity, where everything that’s happened or will happen just is.

Time gives us more: we can be different selves, live in different worlds. We can grow. And, by memory, we can see those several selves at the same time, overlaid in a shifting frame.

I stand at the top of the switchbacks, watching the brothers and me meander up through the hot August sun. And I think of how thankful I am for that sight, for the ability to see from here to there.

The trail twists down through buggy thick brush, then old growth—stately old trees and a carpet of deep green moss, strange old the sweltering sun.

I leave the PCT for Spinola Creek, now more a river than a stream, then tumble down the easy tread to the tangle of trails on the southeast shore of Waptus Lake.

I cross the outflow at an easy deep ford, then amble upstream on unused trails to an ancient assortment of old camp clearings at Quick Creek. Fire rings filled with grass. 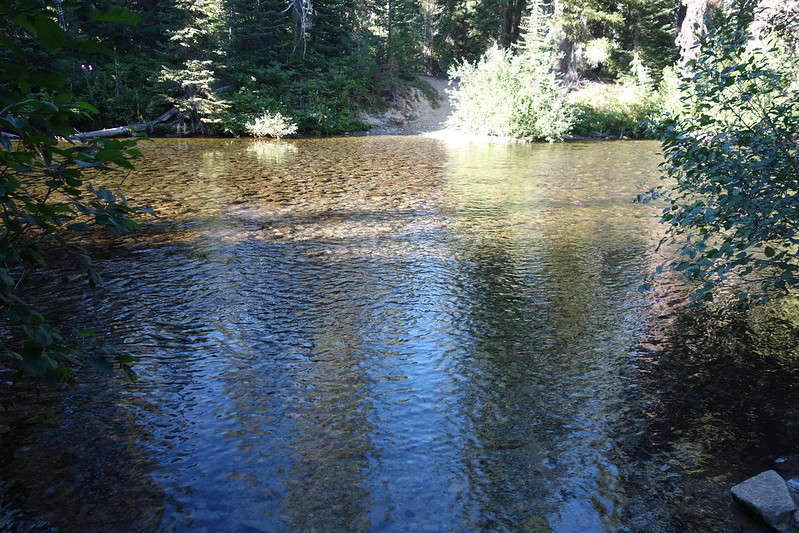 I set up on an old tent pad covered in branches. Then the most wonderful evening. I swim out to the center of the lake, watch campers on the opposite shore setting up their tents. Above, at the head of the lake, Bear’s Breast Mountain catches the day’s last light. A tiny trout jumps not a foot from my left shoulder. 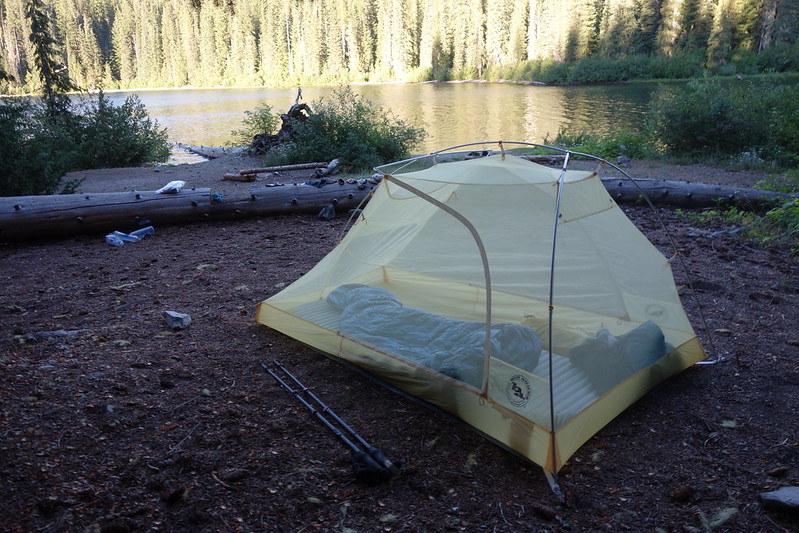 Back at camp, I hang my wet clothes to dry and watch across the way as headlights appear, glittering on the barely broken water. Laughter echoes across the lake.

One thought on “Across the Alpine Lakes, Day 5: Henderson the Rain King”