Waptus Lake to Park Lakes via Waptus Pass and the PCT 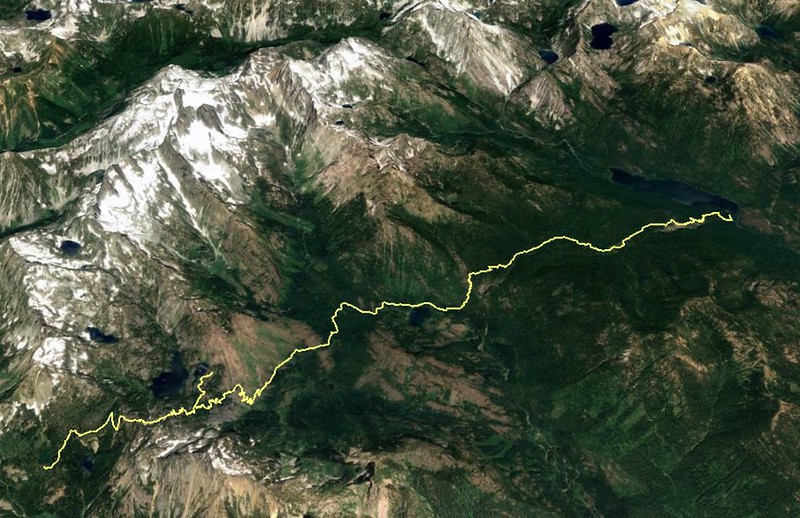 At sunrise, light and smoke funnel up the Waptus River, up the canyons that stretch from here to Cle Elum and down to Yakima.

There’s a fire there, a couple dozen miles west of town, burning dry grass and tinder into the eastern Cascade foothills.

I’m weirdly sore—maybe yesterday’s heat and dehydration followed me through the night—and I bumble through morning chores.

The smoke follows me up Quick Creek to the broad buggy meadows of Waptus Pass, then through miles of marsh and huckleberry and blooming heather. It’s absolutely silent up here, but for the occasional footfalls of deer running twisted paths through the wet grass and mossy trees. 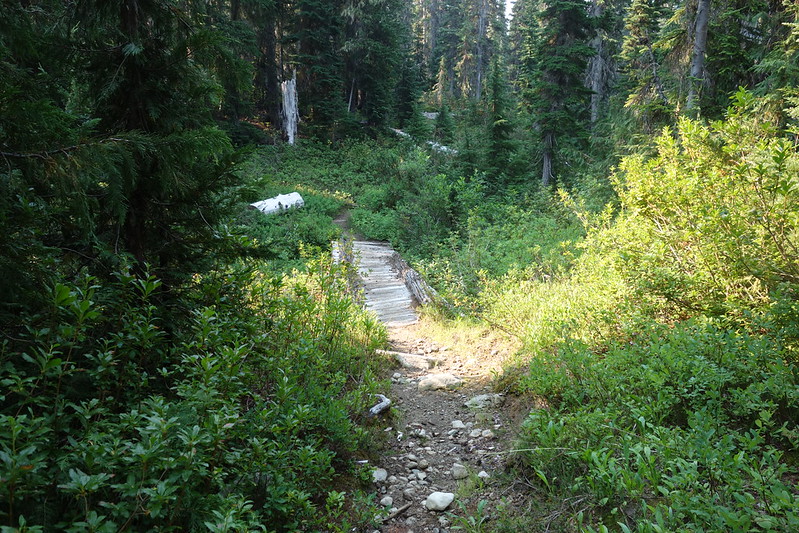 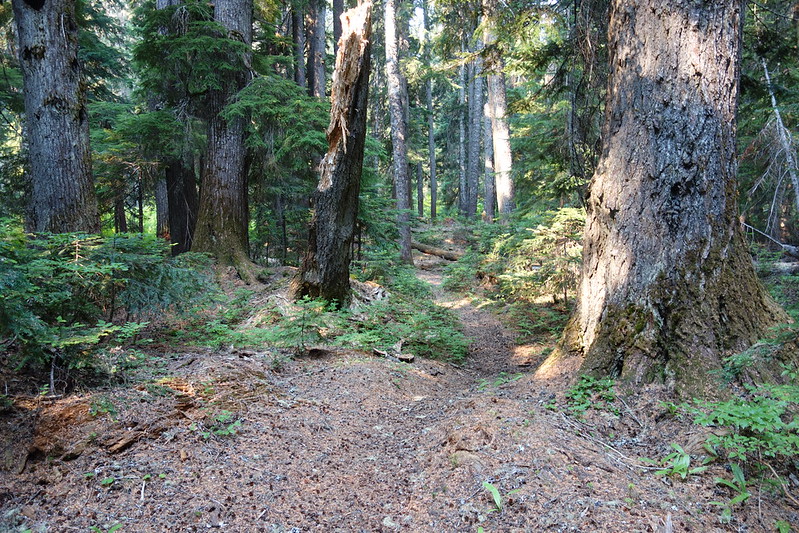 I stop for a snack at a rocky overlook above the Cooper Rive Valley. It’s full of thick smoke.

The trail drops fast into the valley, a thousand feet in a little less than a mile. At the bottom is Pete Lake, a deep grey pool filled with tiny islands, each just big enough for a small fern or stunted tree. The Cascade Crest—Chikamin, the Lemahs, Chimney Rock—is a blurry reflection in the still, misty surface. 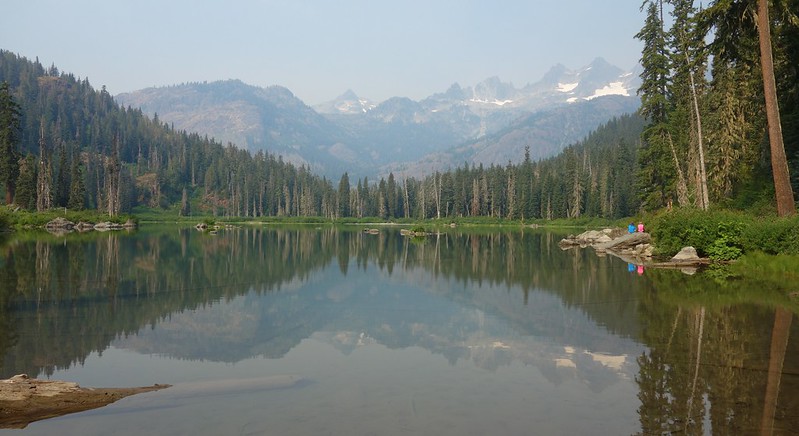 I stop to filter a few liters of water, and watch a pair of birds skim from one side of the lake to the other. Their songs sound like laughing. 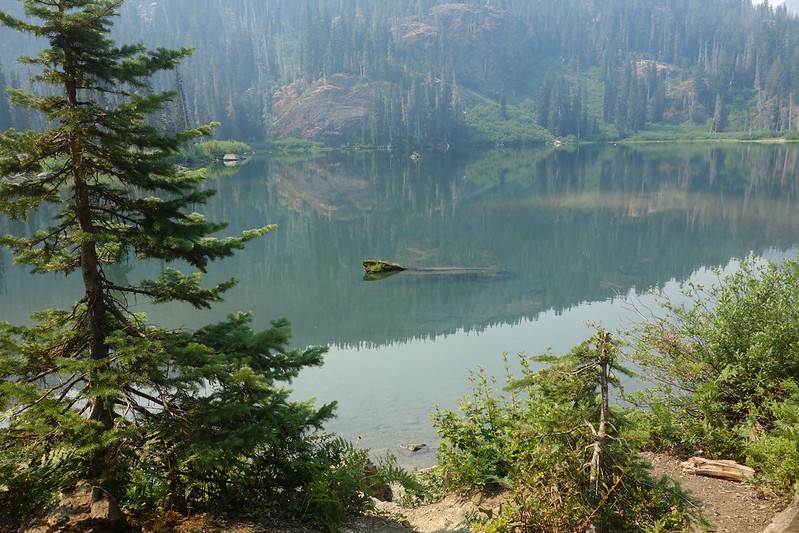 A mile above the lake, I ford Lemah Creek—here a deep, quick, braided river that flows above my waist. The birds from earlier—or similar ones singing the same song—are here too, flying back and forth. 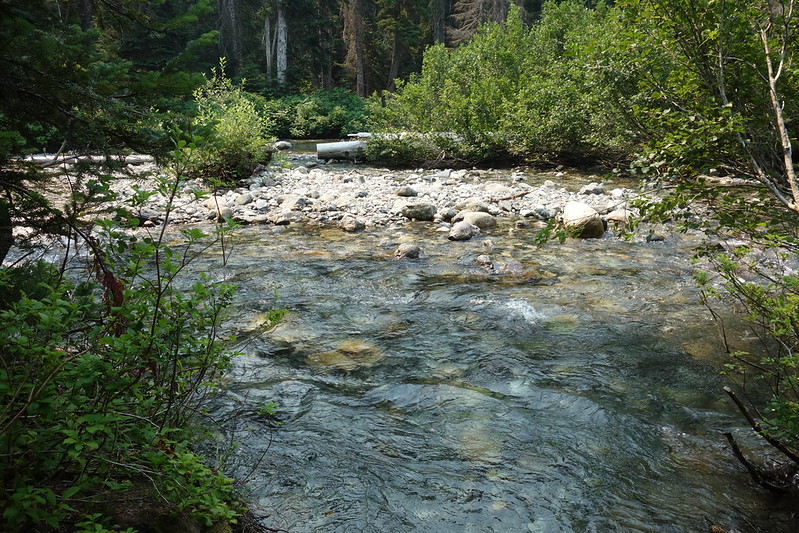 The smoke thickens in the early afternoon heat as I stumble through the old fire-scarred forest up to Spectacle Lake.

On the switchbacks below the Lake I meet a struggling PCT hiker, limping hard with a mostly empty water bottle hanging strangely from his shoulder strap. He started south from the Canadian border a month ago, but screwed up his ankle in Glacier Peak, and spent two weeks in Winthrop, on crutches. He tells me it still bothers him, like clockwork after eight miles. He’s at nine, with another to go before his planned camp at Spectacle.

“It’s strange,” he leans deeply on his pole. “I meant to make it to Mexico, but I’ll be lucky…” He takes a long pause, looks in the distance, then smiles, as if changing directions. “It’d be great if I could make it to California.” 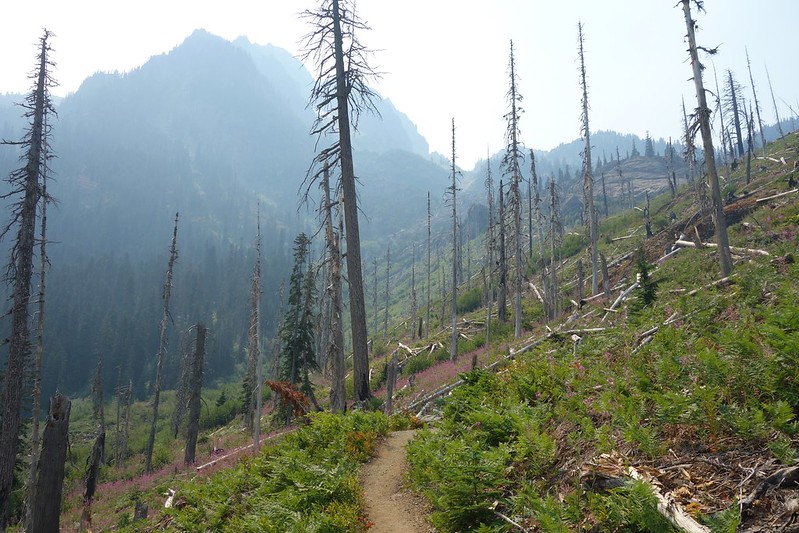 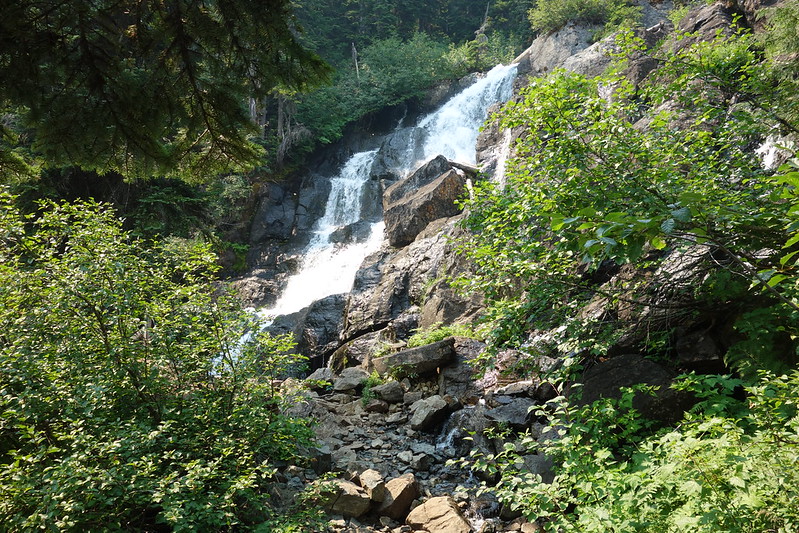 Spectacle Lake’s different than I remembered. In the strange smoky light, it feels almost as though I’m seeing it for the first time. But in that strangeness, I really do get, in some sense, to relive the feeling I felt that first time, to relive the awe. 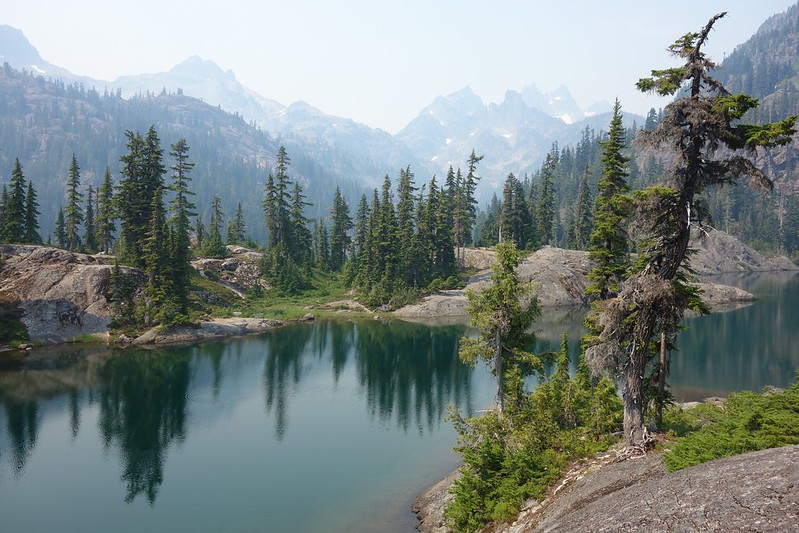 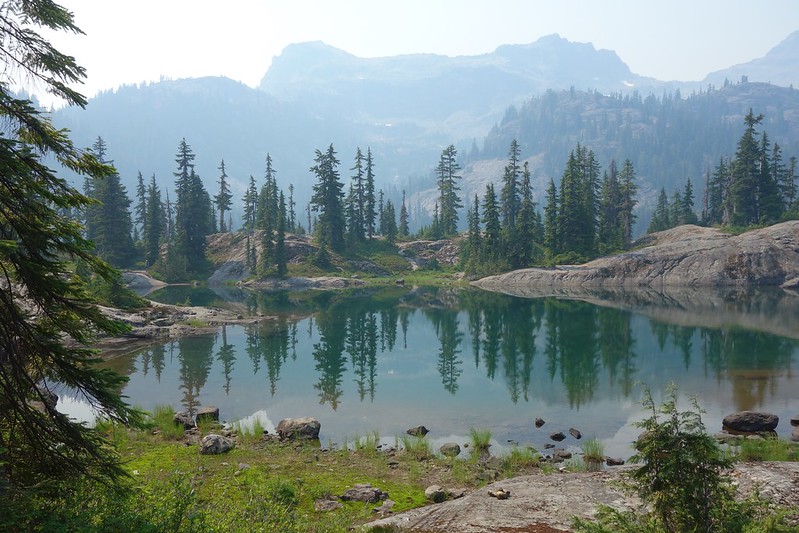 I spend a long time on the far eastern shore, swimming out to the center, watching the sky get dark and light and dark again.

A group of heavyset men in new camo and heavy packs set up shop across the way, shouting and laughing too loud. I start packing up, but am interrupted by a clattering splash, then another, then a third. They’re in the water now, camo bathing suits, riding blow-up swans. One waves a can of Coors as they pass by, and shouts “hello” in a fake Australian accent that sounds exactly like a drunk Crocodile Dundee.

The hike up from Spectacle Lake up to Chikamin Ridge is hot and sticky. The smoke’s thickened. My stomach and lungs feel weird. 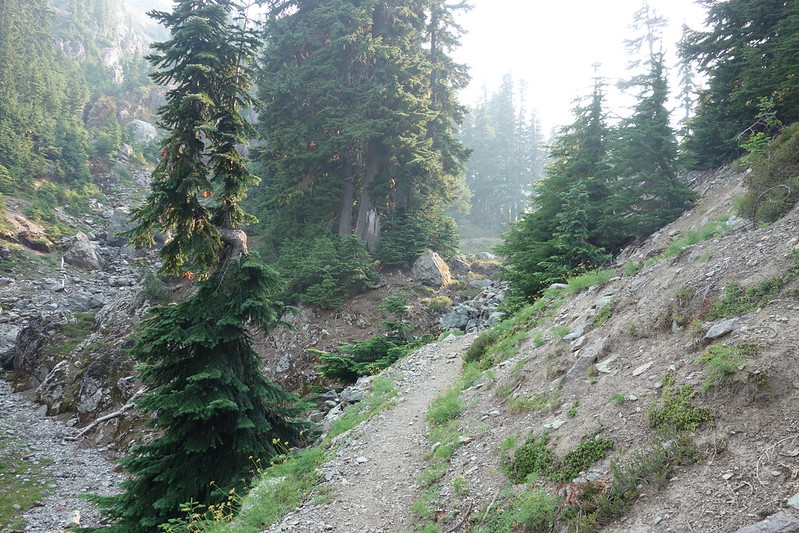 A few thru hikers trickle down the trail, now on the last few hundred miles of their 2600 mile walks. One—“Python,” a guy about my age with a tiny pack and enormous calves—stops to chat. He talks too fast then too slow, he’s happy then sad. He says he feels “the edge of the end.” And he feels the “the god damn smoke.”

Having skipped most of Oregon to get around the fires, this is the worst smoke he’s seen. “It’s not going to be the end I wanted.” I ask if there’s really any good way for a trip like this to end. He laughs. “Yea, it would be good if it didn’t have to end at all.”

I wonder if maybe it doesn’t have to. “What if you just kept moving: kept walking, kept sleeping in a different place every night?” He shakes his head. “If you did this all the time, it wouldn’t be special anymore. On bad days, it already can feel like a job.”

The end is part of the deal. 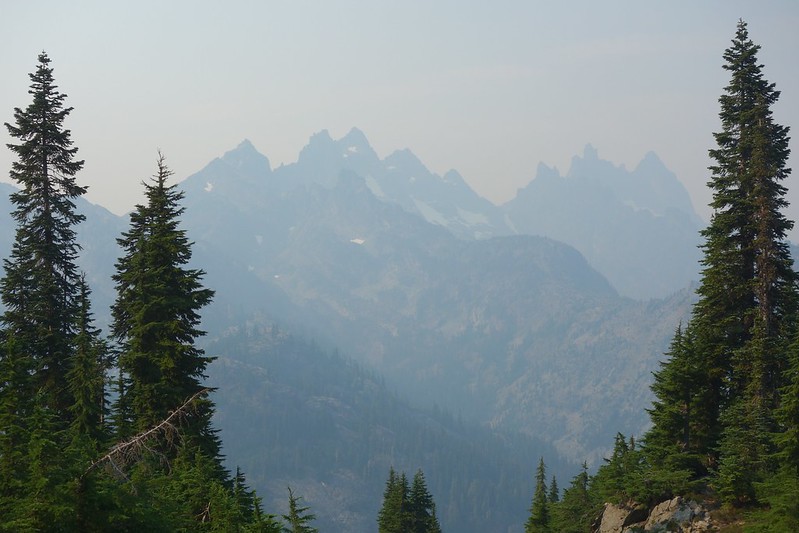 Camp tonight’s a deserted flat on the southern shore of the lowest Park Lake. The upper lakes were a madhouse, full of Boy Scouts and bickering couples, but it’s completely quiet here, but for an elk thrashing in the far side shallows and a couple of big birds floating in the middle, squawking at each other. 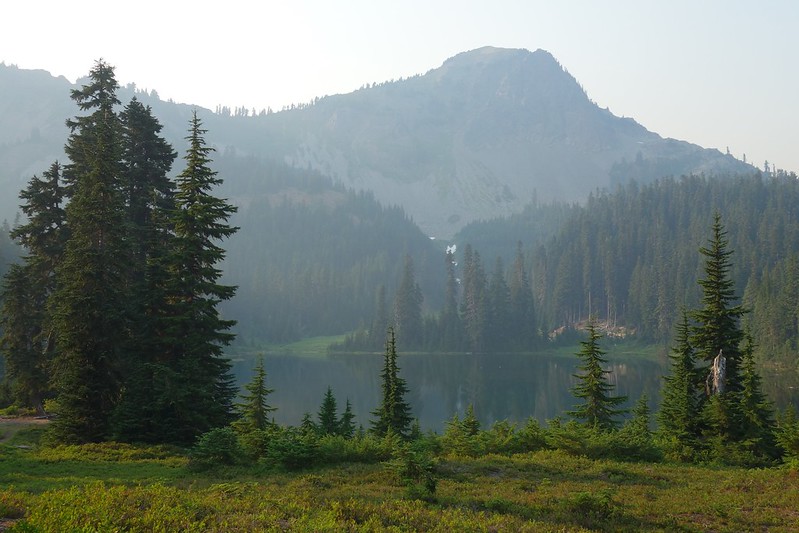 The usual camp things: I hang my food, try to hide from the flies while filtering water, watch the grey sky go gold then burgundy then high bright violet. The smoke recedes down Mineral Creek and out come the stars—just a few at first, then a full sky of constellations and comets. The universe.

I get to thinking about my friend from earlier, about the idea that something like this can only be special if it’s not forever.

I think of this line from Roderick Nash: “it was ultimately civilization that made possible the appreciation of wilderness.” The idea is that, when the world was all wild, the dirt and rock and trees and trails would have just been the background against which life was lived, no more special than buildings or city streets are now. The wilderness only became special, only became a thing we noticed and valued, when we’d already made it rare.

Does it have to be that way?

There’s an old distinction in philosophy of mind between seeing and perceiving. Seeing is an immediate sensation, a biological response to visual stimuli. Perception is the further process by which these and other sensations are selected, organized, and interpreted. One can see without noticing, but to perceive is to notice.

In the background of Nash’s analysis is a more general point: although we may see the everyday things that make up our lives, we don’t always notice them. Things become rote, they slip into the background. We drive to work everyday and stop noticing the cracks in the road or an old stand of trees.

There are vast farm fields along the road I take to work. When I first started, I would notice them every day, notice the corn stocks swinging serenely in the wind, notice the clover cover coming up in the winter and spring. But now, after years, too often I just pass it by. I see, but I don’t perceive.

But, crucially, sometimes I remember to notice. I remember the wonder I felt that first fall at the full fields of budding corn and pumpkin patches full of kids.

That memory—the memory that makes old things new and makes it possible to notice the ordinary background of life—is the memory of a first moment, of a border time before things ossified in the shape they have now. It is, paradoxically, a memory that allows us to forget the current, stable shape of things, and in that forgetting to notice anew the awe our ordinary world deserves.

I think of Nietzsche, in the Untimely Meditations:

[I]t is always the same thing that makes happiness happiness: the ability to forget… the capacity to feel unhistorically… [I]t is possible to live almost without memory, and to live happily moreover… but it is altogether impossible to live at all without forgetting.

I watch the moon rise over Alta Pass, and imagine what it must have been like to see the moon for the first time. This giant rock reflecting an unseen sun.

Tonight, that reflection’s lighting my little lake. The evening birds are still out, but they’re silent now, gliding across the surreally still water. All around, high peaks—Four Brothers, Three Queens, Box Ridge—stand like sentries guarding the quiet night.

One thought on “Across the Alpine Lakes, Day 6: Forgetting and Futurity”